Medically reviewed by Dr. Mike Bohl
Written by Dylan Baker, B.S.
5 min read
7 comments
Read Later
This article may contain links to some of our affiliate partners. These are brands we trust and brands we feel represent the highest quality standards. When clicking links, we may earn commissions to help support our site. Learn more by reading our full disclaimer.

One dictionary definition of frustration says it is the feeling of being upset or annoyed due to the inability to change or achieve a goal.

Many life situations can result in this complex emotion. These situations can include workplace incidents, conflict with friends or family, or even minor occurrences such as traffic jams.

Frustration may not classify as a medical issue, but it is an emotional and psychological response.

The frustration response can cause many problems, including stress. CBD can potentially alleviate the feeling of frustration and reduce stress and tension.

What Is Frustration? Why Do We Become Frustrated?

People often confuse frustration and anger. While they share some similarities, there are some crucial differences. Frustration seldom causes such a profound effect as anger, nor is it as strong an emotion.

Frustration is a natural human emotional and psychological response to something. It is a feeling usually based on the disappointment of something not working out as hoped or anticipated.

If a person believes something has prevented them from achieving a goal, frustration is a typical response. It can happen when they miss a bus or lose to an opponent. 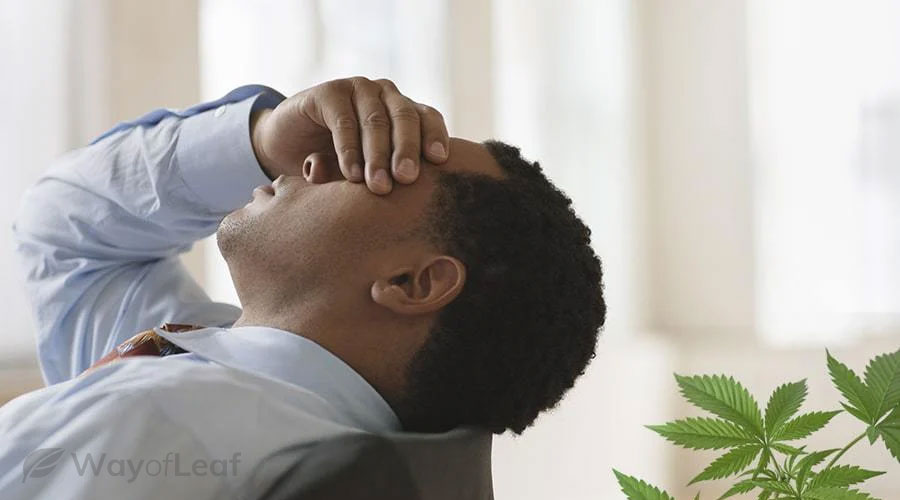 Here is a quick list of factors that could result in frustration:

Typical responses to frustration include:

The Role of the Amygdala

A brain structure called the amygdala is responsible for identifying possible threats to safety and producing a reactive neurochemical response that protects someone from the said threat. Often, this response ends up being an emotional one – that is, individuals react to the neurochemical release in the form of anger, rage, frustration, etc.

Due to the human genetic makeup, some may be more prone to releasing these neurochemical responses much more quickly and readily than others.

Emotion is also a learned behavior, meaning the way somebody grew up, and the environment around them impacts how they experience certain emotions.

This explains why some get so easily angered, frustrated, and enraged by seemingly innocuous situations, whereas others might barely even produce an emotional response.

Of course, there are techniques and coping strategies that can be employed to react to the amygdala’s initial detection of threat more appropriately. After all, properly managing anger (and the frustration that results) is a learned skill.

Coping Mechanisms and Conventional Treatments for Frustration and Anger Control

Rather than seeking to eliminate frustration forever, people should be more realistic and aim to minimize the feeling and ensure they choose a healthier response. Often, when people are frustrated, particular thought patterns relate to the frustration.

How Is That Done?

Whether another person has failed to do something or did it incorrectly, frustration is a natural response. First, people ask how this situation could exist and then try to look for a fix. Instead of becoming frustrated in this scenario, individuals should look at it as an opportunity to test their problem-solving skills.

Why Is This Happening?

If someone is on the way to the airport, and an accident has caused a pile-up, there’s a chance they will miss their flight. They can ruminate and become angry at the situation, or relax and understand there is little they can do about the situation.

Also, if they stay calm, they may come up with an unexpected solution. In the example above, perhaps the person could take a different route, or call the airline for another flight.

Why Haven’t They Called?

If a person is waiting for an urgent phone call, but no one is ringing, frustration is a reasonable emotion to feel. However, they have to realize that they will get the phone call, or they won’t. A person may want to take their mind off things by engaging in an activity.

Perhaps one of the best ways to cope with frustration is to perform physical activity. The release of endorphins could temporarily relieve stress.

Individuals could also try a simple breathing exercise. They can begin by breathing deeply from the diaphragm and slowly repeating a calming word or phrase.

If frustration is threatening to take over a person’s life, they should get in touch with a therapist who can analyze their behavior. In the meantime, let’s see if CBD could be of assistance.

Can CBD Work for Frustration?

CBD is relatively new to the market. However, people have known about its existence for decades. It is the second most abundant cannabinoid in marijuana and is also hugely abundant in industrial hemp, which is now legal to grow in many areas of the United States. Unlike THC, CBD is non-intoxicating, which means you do not experience a high.

Although research is ongoing, CBD is associated with the alleviation of stress. Some believe that cannabidiol may:

While no research looks directly into the effects of CBD on frustration, there are ample studies that have evaluated a possible link between CBD and a reduction in stress and anxiety, two emotional states closely associated with feelings of frustration. One of the best ways to combat a sense of frustration is to become calm, and CBD may help people achieve this frame of mind.

CBD and Anxiety: What Does the Research Say?

As far as anxiety is concerned, CBD could alter serotonin signals. Serotonin is a neurotransmitter, and low levels are linked with depression and anxiety. A study by Shannon et al., published in The Permanente Journal in January 2019, looked at how CBD affected anxiety and sleep. In a study of 72 patients (47 reported stress-related anxiety, and 25 noted poor sleep), 79% stated they experienced reduced anxiety symptom scores after a month of CBD use.

One of the most-cited studies into CBD’s positive effects on anxiety was the research conducted by Bergamaschi et al., published in Neuropsychopharmacology in May 2011. A group of 24 patients who had never used CBD before received a CBD dose or a placebo before a simulation public speaking test. Those who used the CBD reported feeling significantly less anxious about the upcoming speech. These individuals didn’t know at the time whether they used the CBD or placebo.

A review by Blessing et al., published in Neurotherapeutics in October 2015, looked at CBD as a possible option for anxiety symptoms. The detailed study concluded that CBD effectively reduced anxiety-related symptoms from various conditions and disorders, including PTSD, GAD, PD, OCD, and SAD.

Final Thoughts on CBD and Frustration

While it is unlikely that any studies into CBD’s effects on frustration alone will occur, there is plenty of research into its efficacy when addressing the symptoms of anxiety disorders. To date, these studies’ results weigh heavily in CBD’s favor as a means of reducing stress and anxiety symptoms.

Most people that have experienced frustration have probably felt one or both emotions. If someone needs help reaching a relaxed state, CBD may be just what they need to help in that department.