Caffeine and cannabis are two of the most widely used drugs around the world. Given the popularity of both caffeine and marijuana, inevitably, many people frequently use the two together. Some people claim that caffeine improves their marijuana high, making them feel more alert, focused, and energetic.

But is there any scientific evidence to back these claims? And are there any adverse side effects caused by consuming caffeine and cannabis together?

In this article, we will look at the existing research on the subject and answer the question, “Are caffeine and cannabis a good mix?”

Caffeine and Cannabis: How They Affect the Human Body

Caffeine is one of the most widely consumed substances in the world. It is found in beverages such as coffee, tea, cola, and energy drinks, chocolate, and many over-the-counter supplements.

While cannabis is still illegal in most places, it is gradually becoming more widely used for a range of medicinal benefits. Medicinal marijuana patients are now using the plant to help alleviate symptoms, ranging from pain to seizures, and to improve mental well-being generally.

There are countless strains of cannabis that have slightly different effects on the body and mind. Some produce a more energizing and uplifting high, while others induce deep relaxation. Of course, there are also some adverse side effects associated with cannabis. These include:

Caffeine and cannabis can have a powerful influence on the human body. This is due to their ability to bind with receptors in our brains and nervous systems.

Caffeine works by influencing adenosine receptors in the brain. Adenosine has many critical biological functions, including acting as a central nervous system depressant and dilating blood vessels.

The intoxicating compound in cannabis, THC, acts on CB1 receptors that are designed to work with our endogenous cannabinoids, such as anandamide. These chemicals have many vital functions within the body, including influencing pain perception, memory, and cognitive function.

It is thought that there is a complex interaction between adenosine receptors and CB1 receptors. Both can influence the neurotransmitters glutamate and dopamine, and both have a shared mechanism for addiction.

What Happens When You Mix Caffeine and Cannabis? 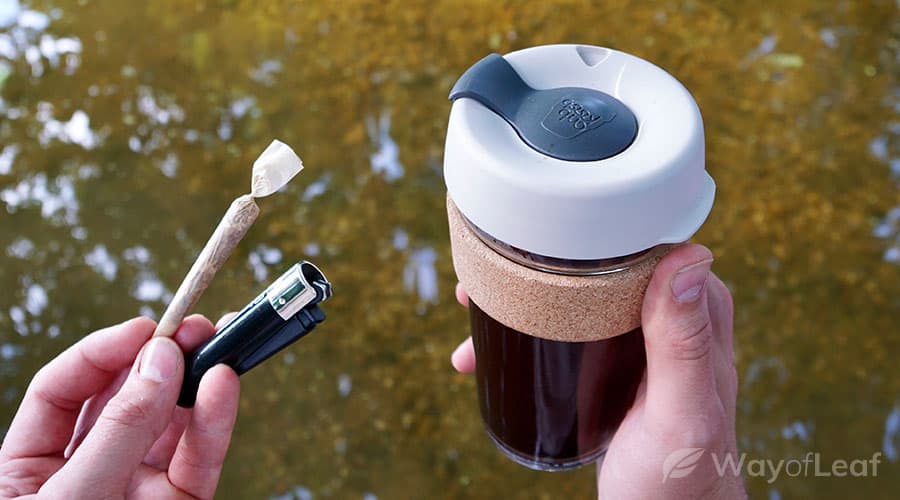 There are sadly few scientific studies specifically on the combined effects of caffeine and cannabis. However, there is some evidence available regarding what happens when these two common substances are used together.

One example is a study published in the Annals of Neurosciences in 2017. This controlled trial looked at the effects of caffeine and cannabis on six groups of rats. The researchers administered high and low doses of caffeine, high and low doses of marijuana, and combined low-dose caffeine and cannabis, while the remaining group served as a control.

After being treated for 21 days, the animal’s brain tissues were tested for the presence of various neurotransmitters and enzymes. The results indicated that all of the animals treated with caffeine and cannabis had increased levels of the neurotransmitters GABA, glutamate, and dopamine, and an enzyme known as G-6-PDH. The animals treated with caffeine showed more significant increases than those treated with cannabis, and increases in G-6-PDH were significantly higher in the combined caffeine-cannabis group.

The results of this study do not necessarily mean the same thing happens in humans. However, the fact that caffeine and cannabis increase dopamine may be significant. Dopamine is a feel-good neurotransmitter and is associated with the reward response when we do something pleasurable. The fact that caffeine and cannabis both boost dopamine levels could be why steaming hot coffee with cannabis feels so good.

The most significant changes produced by combining caffeine and cannabis were in the enzyme G-6-PDH. This enzyme plays a vital role in glucose metabolism, energy production, cell growth and development, and preventing oxidative stress. It might seem like increasing this enzyme would be a good thing, but in reality, over expression of G-6-PDH has been associated with obesity, insulin resistance, and increased blood lipids.

Further research is required to clarify the combined effects of caffeine and cannabis on the body.

One of the most documented adverse effects of marijuana is reduced memory and cognitive function. This problem is especially pronounced in people who start using it at a young age while their brains are still developing.

Because caffeine increases alertness and focus, it is tempting to think that having a strong cup of coffee with marijuana could combat these effects, but it appears that the exact opposite could be true.

A study published in 2012 in the British Journal of Pharmacology looked at the effects of combining caffeine and THC on working memory in rats. It found that THC induced memory deficits when administered alone and that these deficits were increased by combining THC with caffeine. It is thought that these surprising results are due to the way that caffeine interacts with adenosine receptors in the brain.

It is well-known that caffeine and cannabis can both cause anxiety in certain people. However, marijuana is also frequently used to relieve the symptoms of anxiety. This complex relationship is, in part, due to a personal response to the drug. It is also in part due to varying levels of THC and another cannabinoid, CBD.

THC can help relieve anxiety in low doses, but increase it in higher doses. CBD, on the other hand, seems to decrease anxiety at all doses.

Although there is no current research on whether combining caffeine and marijuana increases the risk of developing anxiety, it certainly cannot be ruled out. Therefore, for those who are prone to feeling anxious, it might be best to avoid using these two substances together. It is also advisable to avoid high-THC marijuana strains and opt for a variety that is rich in CBD instead.