Nowadays, many people see CBD as a miracle cure. It has become a popular remedy for pain, anxiety, seizure disorders, and more.

A quick online search suggests that CBD could even help chronic conditions like Sjogren’s syndrome. However, digging a little deeper reveals that there is little evidence to support many of these claims.

So, what is the truth about CBD oil for Sjogren’s syndrome? Is it really effective, or are companies just cashing in on the latest healthcare craze?

Here’s what you need to know.

What Is Sjogren’s Syndrome?

Sjogren’s syndrome affects somewhere between 0.1 and 4% of the population. It is a disorder that affects the glands that produce saliva and tears. The main symptoms of Sjogren’s syndrome are dry mouth and eyes, although it can cause other problems too.

The condition tends to develop between the ages of 40 and 60. It affects around ten times more women than men.

There is a wide variety of Sjogren’s syndrome symptoms, and they can range from mild to severe.

As a result of dry eyes, Sjogren’s syndrome can cause:

Dry mouth can cause the following symptoms:

Furthermore, some (but not all) people with Sjogren’s syndrome also experience:

Sjogren’s syndrome is an autoimmune disorder, meaning the immune system becomes overactive and attacks healthy tissue. In the case of Sjogren’s syndrome, it damages the moisture-producing glands of the body.

People with Sjogren’s syndrome often suffer from other autoimmune diseases, including rheumatoid arthritis and lupus.

People with Sjogren’s syndrome often suffer from other autoimmune diseases, including rheumatoid arthritis and lupus. Nobody is sure precisely what causes these conditions. However, most scientists agree that genetics, hormones, and environmental factors are at play.

There is no cure for Sjogren’s syndrome. However, there are treatments to help manage its symptoms, including:

People can also minimize symptoms by making some lifestyle adjustments. They include:

There is currently no research on CBD oil for Sjogren’s syndrome.

Some studies, such as this 2009 review for Future Medicinal Chemistry, suggest that it could help autoimmune disorders in general. It might be especially beneficial for conditions with an inflammatory component, such as arthritis. 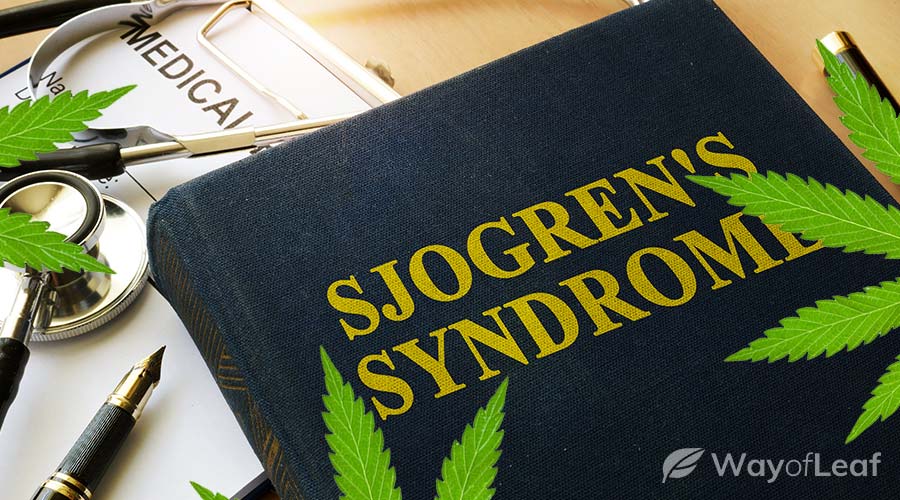 CBD influences the production of a number of inflammatory modulators to produce anti-inflammatory effects. It can, therefore, help to relieve pain and may even slow disease progression.

Many people know that cannabis can cause dry mouth as a side effect. But what about CBD?

Unfortunately for anyone wishing to try CBD for Sjogren’s syndrome, the cannabinoid seems to have similar effects. Although many people use CBD without any adverse reactions, a small number of people do experience side effects. One of the most common issues is dry mouth. Let’s take a look at why.

Anandamide is an endocannabinoid and has a range of vital functions in the body. It binds with cell receptors known as CB1 and CB2 to trigger a variety of physiological responses. These receptors exist throughout the body’s tissues, including the salivary glands.

A 2006 study for Experimental Biology and Medicine tested anandamide’s effects on the salivary glands of rats. It found that injecting the compound directly into the rats’ submandibular glands reduced their saliva production.

It is unclear whether people with Sjogren’s syndrome would see similar results, as clinical research is lacking. However, these initial results suggest that CBD is more likely to cause a dry mouth than relieve it.

Is CBD Good for Dry Eyes?

Although it is less common, there are also reports of CBD causing dry eyes. However, there is sparse clinical evidence relating to CBD and dry eyes in Sjogren’s syndrome.

The journal Neurochemical Research featured an interesting piece of research in 2018. It suggested that CBD increases levels of two neurotransmitters, acetylcholine, and norepinephrine. Both of these chemicals play a role in tear production.

However, the study focused more on the other effects of these neurotransmitters, such as how they influence wakefulness. It also involved rats rather than humans. Therefore, it is difficult to conclude whether CBD would relieve or aggravate Sjogren’s syndrome-related dry eyes.

It is possible that another component of the cannabis plant could help to relieve dry eyes, though. Hemp seed oil doesn’t contain CBD or any other cannabinoids. However, it is rich in omega-3 fatty acids, which might help lubricate the eyes when taken as a supplement.

A 2013 study for the International Journal of Ophthalmology investigated. It tested the effects of omega-3 supplementation vs. placebo on patients with dry eye symptoms.

It found that, at the 3-month assessment, 65% of symptomatic participants in the omega-3 group experienced relief. The remaining 35% saw moderate improvements. In the placebo group, these figures were 33% and 67%, respectively.

Although the evidence did not apply to Sjogren’s syndrome, specifically, omega-3 fatty acids have many other benefits for health. They are also unlikely to cause dry mouth and eyes, as they do not influence anandamide.

Therefore, it may be that hemp seed oil is more appropriate than CBD for people with Sjogren’s syndrome.

There is not enough evidence to claim that CBD oil can help Sjogren’s syndrome. In fact, it could make symptoms like dry eyes and mouth worse.

Hemp seed oil may be more suitable as it is rich in omega-3 fatty acids, which appear to benefit dry eyes. However, research is minimal, and whether it translates to patients with Sjogren’s syndrome remains to be seen.

Anyone wishing to try CBD for Sjogren’s syndrome, or any condition, should discuss their options with a knowledgeable physician first.