If knowledgeable medical professionals not controlled by Big Pharma had their way, marijuana and its cannabinoids would be the future of medicine and opioids would be confined to the dustbin of history. Indeed, with over 110 identified cannabinoids found in weed to date, it’s clear that there’s a lot to uncover.

Perhaps the biggest issue with weed is the psychoactive effects (in other words, getting high). It is apparently the main reason why cannabis is a Schedule I substance (although the truth is more nuanced) and this fact prevents a significant number of people from using it to alleviate pain and other debilitating conditions.

However, not all cannabinoids are psychoactive, and researchers know that if they can continue researching non-intoxicating ones such as CBD, there’s a greater chance of cannabis being accepted as medicine. Of all the cannabinoids identified to date, there is a clear Big Six and we focus on one of them, THCV, in this article.

THCV (tetrahydrocannabivarin), also occasionally called the ‘sports car of cannabinoids’, is a relatively abundant yet little-known cannabinoid despite its Big Six moniker. It is a weed compound that potentially provides people with an array of benefits and unique effects. THCV was discovered in 1973, and while it isn’t as popular as CBD or THC, it is an extremely well-studied cannabinoid.

It is a molecule with C19H26O2 as its chemical formula, which means it contains 19 carbon atoms, 26 hydrogen atoms, and two oxygen atoms. It follows the typical phytocannabinoid behavior of being insoluble in water, but very soluble in lipid-based solvents. Structurally it is similar to the famed psychoactive cannabinoid THC, but there are a few differences which we outline below.

THCV is unusual insofar as it is only psychoactive in high doses, a bit like CBN. Most known cannabinoids are synthesized from cannabigerol (CBG), which is a compound found in all forms of weed. CBG goes through a metabolic process from which the likes of CBD, THC, and several other cannabinoids are created. However, THCV forms after the joining of divarinolic acid and geranyl phosphate. The resulting THCV acid is decarboxylated to create THCV.

In low doses, THCV acts as an antagonist of the CB1 receptor, which means you won’t experience a ‘high’. When you increase the dose, though, something very strange happens; THCV switches behavior and acts as a CB agonist, like THC, which means you WILL get stoned. When you smoke a high THCV strain in large doses, you should experience a stimulating and clear-headed high which sadly, doesn’t last long. You can expect THCV to work faster than THC, but it lacks its cousin’s longevity. 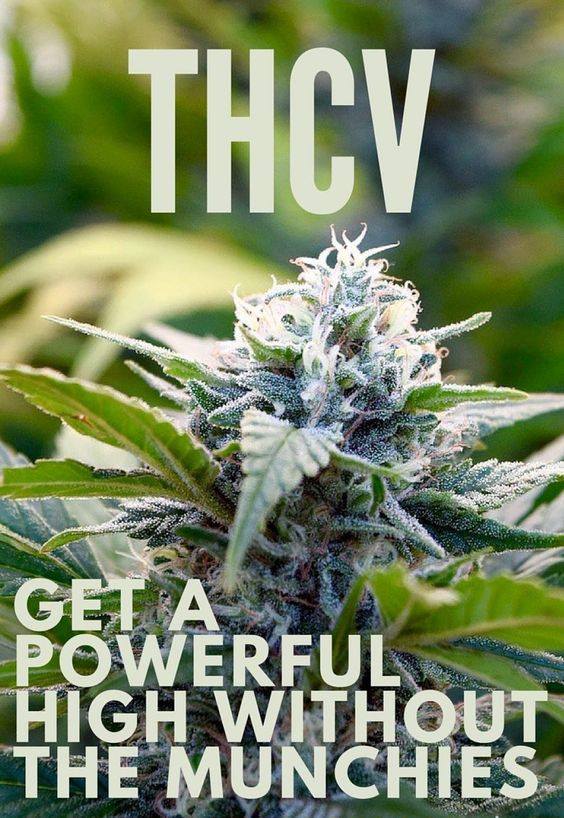 What’s the Difference Between THCV & THC?

As we just mentioned, THCV can somewhat mimic the psychoactive effects of THC in large doses because of their similar structures. For example, their atoms have an almost identical arrangement. However, THC’s side-chain is comprised of a pentyl group, while THCV’s has a propyl side-chain. The best-known cannabinoids are made from pentyl groups, but some follow THCV’s propyl group (including CBDV and CBV).

One of the most fascinating differences between the two cannabinoids is that THCV suppresses appetite whereas THC actually increases it (a.k.a. ‘the munchies’). In fact, studies have shown that THCV can limit the effects of THC, which makes it the cannabinoid of choice if you want to get high while maintaining your “svelte” figure.

The Benefits of THCV

As well as offering a faster and arguably more intense high than THC when used in large doses, research suggests that THCV has a lot of legitimate medical benefits. Along with several other cannabinoids, THCV binds to receptor sites located in the immune system, major organs, and brain.

According to World Health Organization (WHO) stats from 2016, an estimated 1.9 billion adults are either overweight or obese. This equates to 39% of the world’s adult population, while 13% are obese. Also, these figures include data from impoverished nations so the statistics are even grimmer in Western nations.

One of the main reasons for THCV’s success in this field is because it does an excellent job of suppressing CB1 receptors. Research shows that around 3mg per kilogram of body weight is the ideal dose for weight loss purposes. Studies also suggest that strains high in THCV and CBD work better than ones that are high in THCV and THC.

It seems remarkable that THCV has not been approved as a weight loss treatment when you consider the catastrophic Rimonabant tests. This anti-obesity drug caused severe depression – amongst other side effects – and the trial was terminated because of a high rate of suicide.

Remember, THCV helps reduce your appetite so not only is it a great weight loss tool, but it could potentially become a lifesaver for people living with diabetes as well. A study by Wargent et al. that was published in 2013 showed that THCV has potential as a method of treatment for diabetics who suffer from obesity-related glucose intolerance.

In another study by Riedel et al., this one published in 2009, the research team found that THCV reduces swelling and pain in mice. These are two of the main symptoms of inflammation after exposure to inflammatory chemicals. Intriguingly, the team also looked at the impact of Rimonabant and found that it hindered THCV’s effects, which is a clear sign that THCV activates cannabinoid receptors.

During the study, the mice were given THCV after inflammatory exposure each day for four consecutive days. As well as proving effective in reducing inflammation, the scientists found that the mice did not build up a tolerance to the compound.

Research has shown that THCV is capable of reducing or even eliminating panic attacks which means it could be a fantastic treatment for individuals with PTSD or other anxiety disorders. Most of the research has taken place in Israel and scientists have determined that THCV worked because it suppresses our ‘panic’ mode, which occurs during our natural fight-or-flight response to threats.

Research shows that THCV is effective in reducing the tremors associated with conditions such as ALS and Parkinson’s disease, as well as a reduction in brain lesions in the latter illness. The compound may also stimulate bone growth which makes it a useful addition to osteoporosis treatment options. Moreover, there is evidence that THCV reduces seizures and since it is non-intoxicating in smaller doses it could be a useful way to treat children with epilepsy.

As per usual, confusion reigns over THCV’s legal status in the United States. Since it comes from weed and is psychoactive when used in large doses, you would expect it to fall under the marijuana umbrella which of course would make it federally illegal. However, there is still a great deal in terms of legality when considering individual cannabinoids. All we can tell you is that THCV is not scheduled at the federal level in America, nor is it scheduled by the Convention on Psychotropic Substances.

Over in the United Kingdom, we happened to come across a letter written by T. Rowland to the British Home Office, looking for clarification on the legality of THCV. According to J. Bisping of the Drugs Legislation Team, which is part of the Drugs and Alcohol Unit, THCV is “listed as a Schedule 1 to the Misuse of Drugs Regulations 2001 as a controlled drug which has no recognized medicinal benefit in the UK.” So in other words, it is illegal to possess or sell THCV in the UK. The legal standing of THCV in the United States, however, remains even more unclear. 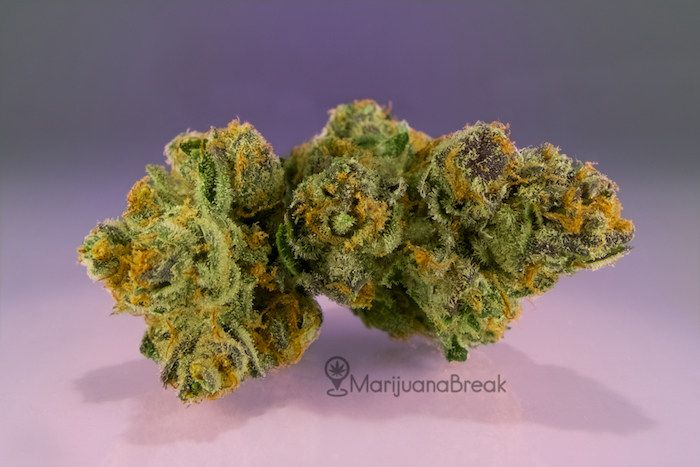 Unlike cannabinoids such as CBN and CBC, there are relatively high levels of THCV in a wide variety of marijuana strains. Back in 2004, for instance, an article in the American Journal of Botany performed numerous tests on landrace populations across the globe to determine their cannabinoid levels. This detailed research found over 150 marijuana strains with a measurable level of THCV.

In a specific 1973 study, one South African strain was found to have a THCV level of over 53%. Your best bet when seeking high THCV strains is to focus on African sativas. Here is a list of high THCV strains that you might want to get your teeth into:

As you can probably guess, Doug’s Varin and Slim Hash are specially bred to have an insanely high THCV content. Slim Hash was created by Andrew Campbell and his creation won an award at the 2017 Cannabis Classic. Willie Nelson is also a high THCV strain, though it is difficult to find reliable data on the actual THCV content.

How to Get THCV

To get THCV, you must first understand the mechanism that leads to its creation. As we mentioned earlier, it is formed when geranyl pyrophosphate reacts with divarinolic acid instead of the olivetolic acid that leads to the formation of cannabinoids such as THC and CBD.

The initial reaction creates cannabigerovarinic acid, also known as CBGVA, and this new substance reacts with THCV synthase, an enzyme, and forms THCVA (tetrahydrocannabivarin carboxylic acid). Finally, THCVA gets broken down into THCV via decarboxylation.

However, THCV’s boiling point is a whopping 428 degrees Fahrenheit – a full 114 degrees higher than THC. As a result, you can prepare edibles at a higher temperature but there is a problem with this technique, as a variety of cannabinoids and terpenes begin to vaporize once you go above 245 degrees Fahrenheit (meaning you lose out on a lot of “goodness”). On the plus side, it makes things easier if you want nothing but THCV in your “yummy gummy.”

If you hadn’t heard of THCV before reading this article, we hope that you now realize it’s one of the most important medicinal cannabinoids in marijuana. Although it doesn’t have psychoactive effects at low doses, it provides users with an intense, euphoric and short-lived high when used in large quantities.

To date, research shows that THCV could become the basis for an effective treatment for obesity and type-2 diabetes. Other possible benefits include acting as an anti-inflammatory, reducing seizures, reducing tremors in Parkinson’s patients and controlling PTSD and anxiety disorders.

It is also interesting to note that while THCV shares a similar profile to THC right down to the psychoactivity, it also inhibits some of THC’s negative side effects such as increased heart rate or weight gain. Up until recently, there were few marijuana strains with more than 2% THCV, but now growers are breeding special THCV-high plants in the knowledge that this cannabinoid is set to become extremely popular in the near future.