Over the last few decades, intensive research has unraveled a few of the mysteries behind how cannabis creates various medicinal and psychoactive effects.

Ultimately, it all comes down to the endocannabinoid system (ECS). Cannabinoids like tetrahydrocannabinol (THC) and cannabidiol (CBD) elicit many of their health benefits by interacting with this system. It is integral to our physiologies and is responsible for an array of different processes.

The ECS consists of two different receptors that can accept cannabinoids. These receptors are known as CB1 and CB2. Here’s what they do and why they are so important.

The Endocannabinoid System: A Brief Overview

Before we dive into CB1 and CB2 receptors themselves, we first need to explore the ECS. It was discovered in the 1990s by scientists studying the effects that cannabis has on the body. Hence, they named this system after the cannabis plant.

The ECS is a communication system that is found in the body. It consists of a collection of specialized receptors, chemicals called endocannabinoids, and the enzymes that break them down.

The ECS influences various processes, including energy production, organ function, metabolism, circulation, and more. Through multiple interactions, the ECS appears to play a vital role in a multitude of physiological activities, including:

Although only recently discovered, cannabinoid receptors play a crucial role in the human body. When cannabinoids (like THC or CBD) activate the receptors, they can alter how the body regulates itself.

The ECS also produces its own endocannabinoids, and they play an essential role in maintaining a state of balance in the body. When a person consumes cannabinoids or any other chemicals that bind with ECS receptors, they are technically supplementing this naturally occurring process. 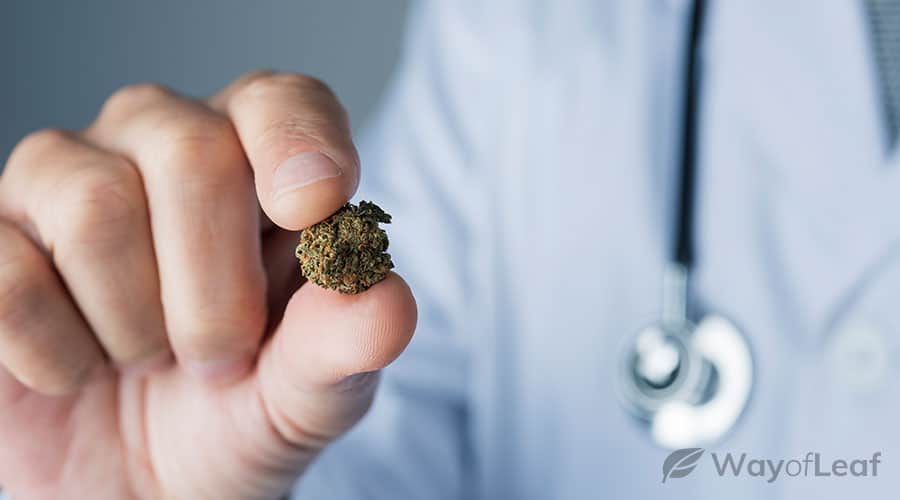 One of the best-known endocannabinoids is anandamide. Discovered by Dr. Raphael Mechoulam from the Hebrew University in Jerusalem, anandamide reportedly binds to CB1 receptors, especially those in the brain and nervous system. Meanwhile, CB2 receptors bind together best with another endocannabinoid called 2-arachidonoylglycerol (2-AG).

These receptors act like a lock, and cannabinoids are the key. For instance, when a patient vapes, smokes, or ingests cannabis flowers, edibles, or a concentrate, the receptors activate when the two combine.

In addition to CB1 and CB2 receptors, a third receptor known as GPR55 may also bind with cannabinoids. However, up until now, most research has focused on CB1 and CB2, the subject of this article. Let’s look at each type in detail.

CB1 receptors are typically found on nerve cells on the spinal cord and brain, which is how cannabinoids could affect pain, mood, and memory. But, they have also been found in organs and tissues like the endocrine glands, white blood cells, the spleen, and parts of the reproductive, urinary, and gastrointestinal tracts.

The cannabinoid THC appears to have a very high binding affinity to CB1 receptors in the brain, connective tissues, central nervous system, glands, and related organs. This is one of the reasons that high THC cannabis strains often produce potent physical and mental effects.

When a person consumes cannabis, THC from the plant binds with CB1 receptors, and these receptors transmit signals to the body. Therefore, THC has the potential to provide much-needed relief to patients with a wide variety of medical conditions, including pain, depression, and nausea, while delivering a strong psychoactive high.

CB2 receptors are primarily found on cells in the immune system, as well as its associated structures. There is a high concentration of them in the gastrointestinal system and spleen. These receptors are involved in regulating appetite, pain management, and immune system functions like inflammation.

When CB2 receptors become stimulated, they produce a response that fights inflammation, which, in turn, reduces pain and minimizes damage to the tissue area. These anti-inflammatory effects are beneficial in treating numerous inflammation-related conditions.

Since CB2 receptors exist in greater density in the gastrointestinal system, they modulate intestinal inflammatory responses. This is why inflammatory bowel disease and Crohn’s disease patients may experience significant relief when using cannabis as medicine.

Furthermore, activating CB2 receptors could provide powerful and long-lasting relief for patients with various other conditions ranging from arthritis to atherosclerosis.

The researchers suggested that finding a way to activate CB2 receptors exclusively could assist in treating these conditions without triggering the psychoactive effects associated with CB1 receptors.

However, CB2 receptors’ effects are not limited to reducing inflammation. A 2014 study discovered that they also play a part in modulating dopamine activity in an area of the brain called the ventral tegmental. This is the part that is responsible for reward and addiction.

The study found that by activating CB2 receptors, cocaine-addicted mice administered a decreased amount of cocaine to themselves. These findings support the idea that the activation of CB2 receptors could provide effective therapy against drug addiction.

More research is necessary to uncover the full extent of CB1 and CB2 receptors’ therapeutic potential. However, the current evidence suggests that they hold great promise.

CB1 and CB2 receptors are the two primary receptors in the body that seem to truly unlock the various health benefits associated with cannabis. These receptors’ behavior is why many researchers have deemed the receptors “locks” and cannabinoids as the “key.”

As more research into cannabis and the ECS emerges, we hope our understanding of how this amazing plant affects the body will continue to improve.