ALS, also known as Lou Gehrig’s disease, is a degenerative disorder. Researchers named this disorder after the famous baseball legend Lou Gehrig, who was the first to be formally diagnosed with the condition. Characteristics of this disorder include gradually worsening muscle control and strength, which can eventually involve the inability to speak or swallow.

Most modern treatments for ALS focus on palliative care rather than curative solutions. Medical experts help patients to deal with chronic pain and discomfort, while also striving to extend life expectancy.

However, new research concerning ALS is underway. In recent years, there has been a focus on using cannabinoids, such as cannabidiol, to address ALS’s symptoms. This article addresses burgeoning research regarding possible uses of CBD in managing ALS symptoms. Various ways in which ALS can affect patients will also be discussed and examined.

ALS, or Amyotrophic Lateral Sclerosis, is a degenerative disease that causes the muscles in the body to weaken and atrophy. This makes it challenging to move the limbs, but it also adversely affects many functions within the body, including respiration and swallowing. With no known cure, ALS eventually leads to death by respiratory failure, as the body becomes incapable of even breathing properly without aid.

Unfortunately, despite the best efforts of scientists everywhere, there are currently no useful medical treatments that work to prevent or treat ALS. Instead, most medical professionals attempt to delay the onset of worsening symptoms.

Doctors often recommend ALS support group plans that work to improve the mental health of sufferers. It is also beneficial for patients as they can connect to others with the same diagnosis.

Since its approval in 1995, Riluzole, under the brand name Rilutek, has been the primary ALS treatment option. The drug works to slow the progression of ALS, all while prolonging the sufferer’s life expectancy after diagnosis.

The main problem is that these drugs are prohibitively expensive, at least in the USA, and they also tend to create extremely unpleasant side effects.

However, CBD may address the side effects of drugs such as Riluzole, allowing patients to have less stress and discomfort. CBD may assist in making patients’ lives easier, allowing doctors and specialists to concentrate on long-range options and care.

CBD is a chemical compound that works with the body to produce a variety of beneficial effects, many of which can mitigate symptoms.

It works because the body already has an endocannabinoid system (ECS), a health system designed to work with cannabinoids naturally. It is responsible for many different responses within the body, such as the release of helpful neurochemicals and even the body’s inflammatory response. 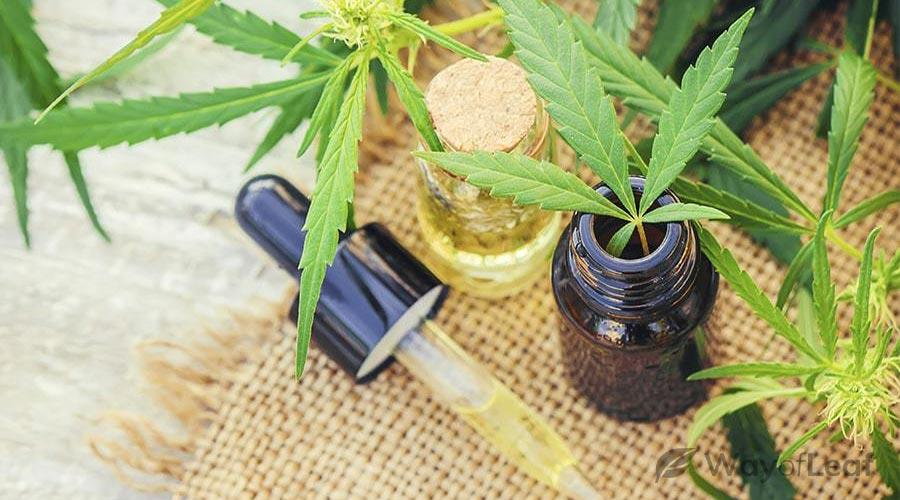 Most conditions that CBD may mitigate are related to these bodily responses – a reduction in anxiety as a result of interaction with the serotonin receptor, or controlling the pain of arthritis by helping diminish the inflammation. These are just two widespread uses of CBD.

What Do the Studies Say?

Over the years, more and more researchers have conducted studies to show CBD’s efficacy as a way to help those with ALS.

One example is a report by Sabrina Giacoppo and Emanuela Mazzon for the Journal of Neural Regenerative Research. It investigated the effects of various cannabinoid compounds on ALS progression and mortality.

The researchers found that delta-9-tetrahydrocannabinol (THC), cannabinol (CBN), Sativex (a 1:1 mixture of THC and CBD), and other compounds had positive effects. They included reducing oxidative stress, protecting the nervous system, and slowing disease progression.

Most of these findings were based on animal studies, meaning further research is warranted. However, the authors concluded:  “…there is a valid rationale to propose the use of cannabinoid compounds in the pharmacological management of ALS patients. Cannabinoids indeed are able to delay ALS progression and prolong survival.”

Despite the lack of human clinical trials, a case report by Gerhard Nahler discussed the effects of co-medication with cannabidiol on ALS symptoms.

Co-medication works by pairing CBD with another conventionally used drug, as certain medications seem to work together and produce an increased efficacy rate. Experts observe this in those who have epilepsy, where they note a reduction in seizures when patients take a mixture of CBD and the conventional epilepsy drug, Clobazam.

The report demonstrated that CBD and Riluzole delayed the progression of the disease in a patient recently diagnosed with ALS. It improved symptoms such as muscle weakness and difficulties with speech and swallowing for approximately 12 months.

Finally, a 2019 study investigated the effects of CBD with THC on spasticity in 32 ALS patients. It found that there was a high level of satisfaction with the treatment, especially among those with moderate to severe symptoms. The researchers state that “THC:CBD may serve as a valuable addition in the spectrum of symptomatic therapy in ALS.” However, they also suggest that further research is necessary.

So Is CBD Oil Only Useful as a Co-Medication?

All this might lead some to believe that the only use CBD oil has is in conjunction with conventional drugs used to treat ALS.

However, while CBD oil can be useful when combined with other drugs, the fact remains that those taking CBD oil still enjoy the various potential benefits that this unique oil would provide. For example, CBD users have stated that this substance reduces stress, increases relaxation, and eases pain, and it is known to have pain-relieving and anti-anxiety properties.

Another potential benefit of CBD for ALS patients is its ability to regulate the immune system and quell inflammation. Experts have suggested that immune dysfunction may contribute to the development of ALS and research has shown that people with the condition often have excessive levels of inflammation.

Although there is currently no evidence that CBD can reduce inflammation in ALS, specifically, it may well have positive effects. While CBD seems to be a worthwhile option, some might be wondering why patients use CBD oil rather than whole-plant, medical marijuana. , In fact, there are a few reasons why some experts don’t recommend regular cannabis for treating ALS.

Why Not Just Smoke Regular Marijuana?

While there are many people who smoke cannabis regularly to manage many of the underlying symptoms of ALS, there are a few significant drawbacks that make taking CBD oil a preferable option.

For starters, THC’s psychogenic effects can potentially be a problem for those with ALS. While some people may find the high pleasant, others may not enjoy the sensation. Furthermore, THC can cause various side effects, including dizziness, confusion, or increased anxiety levels.

Furthermore, marijuana sales are not currently allowed in a variety of jurisdictions in the USA, making it all the more difficult for doctors to recommend it as a useful option to assist with ALS symptoms.

There is also a more practical issue with smoking cannabis – the ability to smoke it at all. As ALS develops, the ability to breathe independently can be impaired, making it challenging to attempt to smoke marijuana. This is often one of the main reasons why CBD oil is preferable, as it is far easier to take for someone with reduced motility.

ALS patients may now use CBD oil to mitigate or reduce their symptoms as it is readily available in many places. Studies show that there is great promise in how people can benefit from CBD.

Although there is still plenty of research to be done, CBD oil seems to be a compelling choice for those looking to lessen the effects of many ALS symptoms.

16
6 min read
Video
Join The Discussion
TOC
Premium
Your subscription has ended
If you love cannabis and want to support our site, join WayofLeaf Premium today and unlock
Best of all, part of your membership fee will go towards supporting the fight to legalize cannabis.
Sign Up for WoL Premium
Not now
I already have an account
×
Log in to Your Premium Account