CBD products are becoming more popular, and most people use them without any apparent side effects. However, the long-term impact of CBD is still relatively unknown. For example, research into how CBD affects hormone production and activity is scarce.

Proponents of CBD claim the compound could positively affect certain hormonal disorders, such as diabetes. But early studies suggest that CBD could negatively affect other hormones, such as those responsible for fertility.

So, how do CBD products affect hormone production and activity, and are they doing more harm than good? Read on to find out.

Before diving into how CBD affects specific hormones’ production and activity, let’s look at what hormones are and how they function in the body.

Hormones are a crucial part of a more extensive system known as the endocrine system. The system also includes numerous glands, including the following:

These glands secrete hormones, which act as chemical messengers, traveling through the bloodstream to act on target tissues or organs. Some hormones exert their effects by entering cells directly, while others bind with specialized receptors on cells’ surfaces.

There are many different hormones, and each has a unique effect on the body. They play a role in growth and development, metabolism, reproduction, and mood. However, the endocrine system’s primary function is to maintain a state of balance, known as homeostasis.

This process relies heavily on a brain region known as the hypothalamus. It acts as a bridge between the nervous and endocrine systems, triggering hormone release in response to internal and external stimuli.

Now, let’s take a brief look at some key hormones and their functions.

Key Hormones and What They Do

Below is a summary of some important hormones and their functions. Please note that it is not an exhaustive list, and there are many more hormones that play an essential role in the body. However, there are so many different hormones with varied functions that it is impossible to discuss all of them here.

Hormonal Imbalances and How CBD Fits in

Hormones have a powerful influence over the body, with small amounts able to trigger massive changes. Therefore, having too much or too little of a particular hormone can cause serious problems.

Some of the most common hormonal disorders include diabetes, thyroid disorders, and reproductive disorders. Another widespread issue is chronic stress, which can significantly impact the endocrine system.

Evidence suggests that CBD could help with some of these hormonal imbalances. However, it could potentially impact other hormones less beneficially.

Related article
5 Best Cannabis Strains for an Imbalance in Hormones

Each strain is perfect for a d…

So, how does CBD influence the endocrine system? First, we need to discuss another vital physiological system called the endocannabinoid system (ECS).

Hormones and the Endocannabinoid System

Like the endocrine system, the ECS plays an essential role in maintaining homeostasis. It is composed of chemicals called endocannabinoids, which act as chemical messengers. Like hormones, endocannabinoids bind with cell receptors to induce various responses throughout the body.

These receptors are called cannabinoid receptors, and the best-known examples are CB1 and CB2. There is a high concentration of CB1 receptors in the brain, including the pituitary gland and hypothalamus.

It appears the ECS is especially active in the hypothalamus, leading experts to hypothesize it could be involved in hormone release. This could include regulating processes such as appetite, energy balance, reproduction, and stress response.

Scientists are just beginning to understand the link between the endocrine and endocannabinoid systems. However, it seems highly likely that they are connected. Therefore, compounds like CBD, which interacts with the ECS, could affect hormonal balance.

Benefits of Using CBD for Hormones

Evidence regarding how CBD affects hormones is mixed. Some studies suggest that it has an impact, while others have found it does not. The results depend upon which hormone the studies were testing and their methodology. 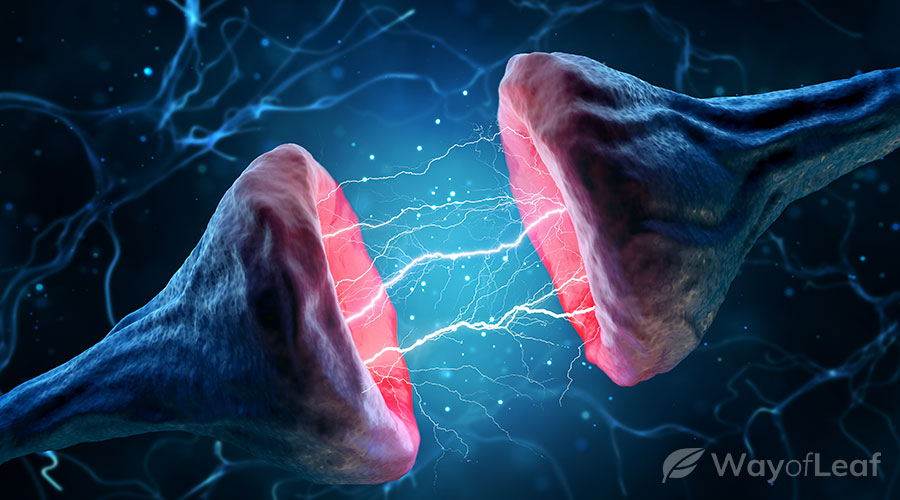 What we do know is that CBD influences the ECS. It primarily exerts its effects by inhibiting the enzyme that breaks down our natural endocannabinoids. This leads to increased activity at cannabinoid receptors, including those in the brain.

Therefore, it makes sense that taking CBD could influence hormone production and activity. What is unclear is whether it affects them for better or worse.

One of the most common reasons for taking CBD is to help individuals manage day-to-day stress. This is also one area where CBD’s effects on the endocrine system become evident.

A 1993 study investigated CBD’s effects on 11 healthy volunteers. The subjects took either 300mg or 600mg of CBD or a placebo. The research team tested the volunteers’ blood for several hormones before and after dosing.

Blood tests were performed in the morning, the time of day when cortisol levels are naturally declining after peaking at around 8 am. Those who took the placebo had a typical reduction in cortisol levels. However, those who took CBD experienced a less significant decline. They also reported sensations of sedation after using CBD.

The study’s authors concluded: “CBD interferes with cortisol secretion.” However, more research is necessary to ascertain CBD’s precise effects on cortisol and stress.

CBD may prove beneficial for individuals living with diabetes, a common endocrine disorder. This condition arises from an inability to produce insulin or a resistance to insulin.

Research has found that CB1 receptors are present in the insulin-producing islet cells of the pancreas. Furthermore, people with diabetes may have elevated endocannabinoid levels, suggesting the ECS could play a role in disease development.

Taking CBD appears to reduce the incidence of diabetes in non-obese mice. It may also help to slow the progression of diabetic complications, such as retinopathy.

However, it isn’t all good news. A 2018 study looked at the effects of CBD on the reproductive hormones in mice. Twenty-one animals received 15mg or 30mg of CBD per kilogram of body weight for 34 days, while the control group received a placebo.

The researchers found that the CBD did not induce changes in progesterone or body weight. However, the mice that took 15mg/kg of CBD showed delays in initiating intercourse. Furthermore, those that took 30mg/kg of CBD had a 30% reduction in fertility and a 23% decrease in litter size.

It is unclear how these findings translate to humans. It is also essential to note that CBD doses in this study were very high. That said, those attempting to conceive may wish to avoid taking CBD until more evidence becomes available.

Is Using CBD a Good Option for a Hormonal Imbalance?

As we pointed out above, there isn’t anywhere near enough evidence to suggest that using CBD to correct a hormonal imbalance is an effective option. Ultimately, more research is required before anyone can definitively say that CBD is a good option for hormonal imbalance.

When using CBD for hormonal benefits, there are no guarantees for the cannabinoid’s efficacy. However, one can give themselves the best chance of experiencing positive results by choosing high-quality CBD products.

This is easier said than done in what is an unregulated industry. Therefore, one should consider the following factors when buying CBD to increase the likelihood of purchasing worthwhile products.

Reputable CBD brands worth considering include:

There isn’t enough evidence to say exactly how CBD affects hormone production and activity. However, early research suggests it does have some effect, especially when taken long-term in high doses.

Anyone worried about CBD’s effects on their hormones should discuss their concerns with a knowledgeable physician or endocrinologist.