Those who have endured muscle cramps understand how painful they sometimes are, and how quickly they can sneak up. Cramps can occur in every muscle, and occasionally, they can wake a person up in the middle of the night.

Leg cramps are among the most prevalent and become more frequent when we get older. There is a suggestion that CBD could help alleviate the pain caused by leg cramps, and possibly reduce their frequency. In this article, we outline the symptoms of leg cramps and the conventional treatments that are available. We also look into the science of whether CBD can help with leg cramps.

What Are Leg Cramps?

They are a condition that happens when the leg’s muscles suddenly become painful and tight. The issue predominantly occurs in the calf muscles, although it can also affect the thighs. Those who experience leg cramps tend to have pain and tenderness in the affected area for several hours. It seems as if the majority of cases occur at night.

Muscles in the body have relaxed and contracted states. A muscle is relaxed when all of the fibers are elongated. It contracts when calcium moves into muscle cells, and sodium comes out. When a muscle contracts, its fibers shorten and become tighter. In general, muscles relax and contract without any problems.

However, there are occasions where the contraction is too forceful, and the result is pain in the form of cramping. A leg cramp’s duration ranges from seconds to minutes.

Leg Cramps: What Are the Causes?

There are occasions where a leg cramp happens with no apparent explanation. These are called idiopathic leg cramps. However, there are also secondary leg cramps, which are a potential symptom of a more severe condition. Possible causes of such cramps include:

When a leg cramp occurs, the muscle suddenly contracts and causes pain. This is called a spasm, and the affected individual is unable to control the muscle. It is only when the spasm passes that the person can regain control of the muscle.

There are a couple of occasions where the leg cramp may be a sign of a more serious issue. It is advisable to seek medical attention in either of the following scenarios:

Dehydration is a potential cause of leg cramps, so it is essential to drink plenty of fluids each day to help reduce the risk. It is also a good idea to stretch before and after using any muscle for an extended time. Individuals that get leg cramps at night should stretch before bedtime. There is also a possible benefit of performing light exercise, such as pedaling a stationary bike for a few minutes before going to sleep.

Once a leg cramp takes hold, the patient should stretch the muscle in question and rub it to relax. An individual with a calf cramp should put their weight on the cramped leg and bend the knee a little. Those unable to stand should sit on a chair, or the floor with their leg extended.

It is also worth trying to apply a hot towel on tight muscles. A warm bath or hot shower could also provide a semblance of relief. Some people find that massaging the muscle with an ice pack helps reduce pain.

How Could CBD Help Leg Cramps?

The bodies of mammals have endocannabinoid systems (ECS) that create cannabinoids naturally. The ECS also includes the cannabinoid receptors, CB1 and CB2, which are found throughout the body and brain. Cannabinoids act upon these receptors and help regulate a wide variety of bodily functions. 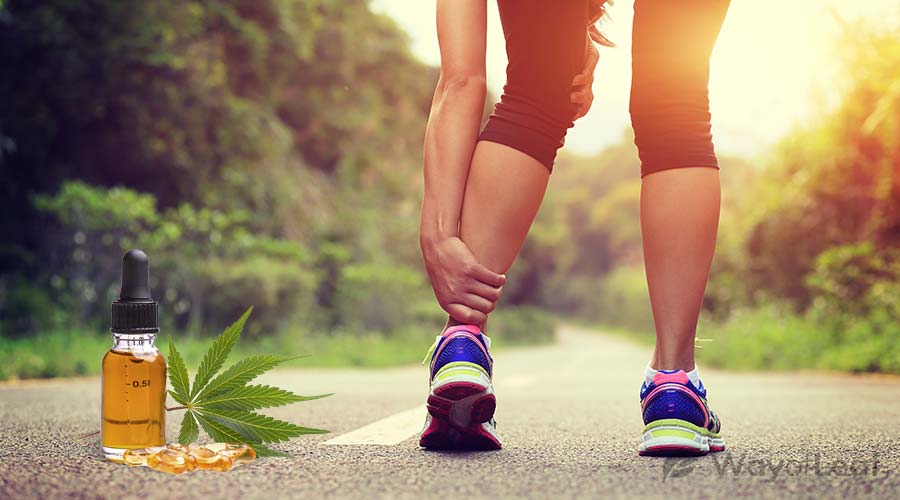 The cannabinoids found in marijuana and hemp, such as THC and CBD, mimic the effects of the endocannabinoids produced naturally by the body. While THC has a direct impact on CB receptors, CBD works a little differently. Rather than directly triggering the CB1 and CB2 receptors, it modifies the ability of these receptors to bind to cannabinoids. CBD seemingly increases the capabilities of the ECS.

Consuming CBD may increase the levels of the ‘bliss molecule,’ anandamide, in the body. In turn, our systems use this chemical to:

Where Is the Scientific Evidence for CBD Helping Leg Cramps?

At present, much of the available research looks into how CBD could help the likely symptoms of conditions such as leg cramps. Pain and muscle spasms are among the two most common reasons why people use medical marijuana and CBD.

A study published in Pharmacology & therapeutics in 2002 looked at the effect of cannabinoids on multiple sclerosis. It found that cannabinoids such as THC and CBD could reduce muscle tremors and spasticity. According to the researchers, this was possibly down to the activation of the CB1 and CB2 receptors in the ECS.

Another study, this time published in the journal, Drugs, in 2014, analyzed the effect of Sativex on patients with moderate to severe spasticity due to MS. Sativex is a pharmaceutical drug that contains THC and CBD at a ratio of close to 1:1.

One group of patients received Sativex for 12 weeks, while another group used a placebo. After 12 weeks, the Sativex using group experienced a significant reduction in spasms and severity of spasticity. These studies suggest that CBD has the potential to reduce the frequency of muscle spasms.

What About Leg Cramp Pain?

CBD could also help with leg cramps by reducing the level of pain experienced. Spasms are an inflammatory response. An inflamed muscle could spasm to draw attention to a problem. CBD may help regulate inflammation and possibly relieve the pain caused by leg cramps.

A study published in Antioxidants in December 2019 looked at the anti-inflammatory and antioxidative properties of CBD. It concluded by saying that the ECS could help modulate oxidative stress in various diseases. As a result, CBD “is a promising molecule for pharmacotherapy.”

The researchers went on to say that the antioxidant and anti-inflammatory effects of CBD have been demonstrated in numerous preclinical models. They also pointed out that cannabidiol is preferable to other phytocannabinoids for this purpose.

Those wishing to use CBD for leg cramps have a wide range of consumption methods to choose from. Using CBD oil regularly could help reduce the risk of developing muscle cramps. It remains the most popular form of consumption and continues to offer among the best value for money.

There is a general growing trend towards the use of vaporizers. Proponents suggest that vaping CBD is best because of the high bioavailability. Certainly, someone in the throes of leg cramp pain may welcome the chance to vape CBD. It seemingly provides pain relief faster than other forms of consumption.

The other viable option is to use a CBD topical, such as a cream or balm. Apply to the affected area, and monitor the effects. Reapply a generous amount of the topical as and when necessary.

At present, clinical evidence that CBD can help leg cramp is lacking. However, there is early research that indicates the cannabinoid has anti-inflammatory properties. It could also prove useful as a means of reducing the severity and frequency of spasms and cramps. Individuals using OTC or prescription drugs for leg cramps, or any other reason, should discuss CBD use with their physician. This is because of the risk of drug interactions.

The method of consumption will vary according to the needs of the user. Those hoping to alleviate pain quickly may prefer to vape CBD. People looking to help prevent leg cramps might want to try CBD oil. Individuals seeking relief for a more extended period may elect to try a CBD topical.

Whatever your preference, you can view our list of the best CBD products to help you find the top-rated brands in the industry.

7
3 min read
Video
Join the discussion
TOC
Premium
Your subscription has ended
If you love cannabis and want to support our site, join WayofLeaf Premium today and unlock
Best of all, part of your membership fee will go towards supporting the fight to legalize cannabis.
Sign Up for WoL Premium
Not now
I already have an account
×
Log in to Your Premium Account