The National Council on Alcoholism and Drug Dependence (NCADD) estimates that 17.6 million Americans suffer from some degree of alcohol abuse. That’s about 1 in every 12 U.S. adults. Furthermore, the CDC estimates that there are over 88,000 alcohol-related deaths in the United States each year. Hundreds of thousands of people with an alcohol use disorder (AUD) also have serious side effects, including:

Alcoholism, at its worst, can feel like a near-impossible addiction to try to overcome.

However, research suggests that CBD oil for alcoholism could prove worthwhile. Cannabidiol is non-intoxicating, meaning that users can enjoy its potential benefits without the high associated with marijuana.

This article outlines what alcoholism is and how CBD could help alleviate certain symptoms.

The term alcohol abuse refers to a pattern of drinking in which the individual’s lifestyle is negatively affected by consumption. This could be in the form of relationships, family life, or professional work habits. It could imply one heavy night out drinking, in which case a person has to call off work the next day, or it could refer to much more serious cases in which the patterns of abuse are manifested on a near-daily basis.

Alcoholism, on the other hand, is the full-blown manifestation of alcohol abuse; the American Society of Addiction Medicine defines it as a “primary, chronic disease with genetic, psychosocial, and environmental factors [that influence] its development.”

The disease, often fatal, is characterized by any one of the following symptoms:

Additionally, alcoholics display a complete and total reliance on the drug, in which case their day-to-day lives become unmanageable without the physiological and psychological effects of drinking.

Once the physiological effects of full-blown alcoholism manifest in an individual, quitting the drug can present an array of serious biological and emotional side effects.

Of course, any of these symptoms may (and often do) warrant seeking professional medical attention. Over a longer-term scale, chronic diseases such as cirrhosis, alcoholic hepatitis, and liver disease may develop in severe cases. Such individuals are also at greater risk of developing cancer or kidney disease.

As far as treatment, one of the most common and effective measures is admission into a detox center. In these facilities, individuals receive the emotional and medical support needed to make the successful transition to an alcohol-free life. In terms of medical support, doctors often prescribe drugs to help with the onset of anxiety, pain, nausea, and loss of appetite.

Due to financial, personal, or professional reasons, many people find treatment facilities impractical. This is one of the reasons why CBD oil for alcoholism is on the minds of so many. It’s far cheaper than prescription medications and/or admittance into a treatment facility. It also allows individuals to largely self-medicate with a specific oil appropriate for them and their unique condition.

To understand how cannabidiol (CBD) works to alleviate the effects of addiction and subsequent withdrawal, we need first to understand how alcohol itself functions to instigate neurological reliance.

In healthy individuals (i.e., non-alcohol abusers), specific brain structures play a functional role in implementing normal self-care behavior. Therefore, if we’re unhappy or unsatisfied, they tell us that a behavioral change is probably in order. 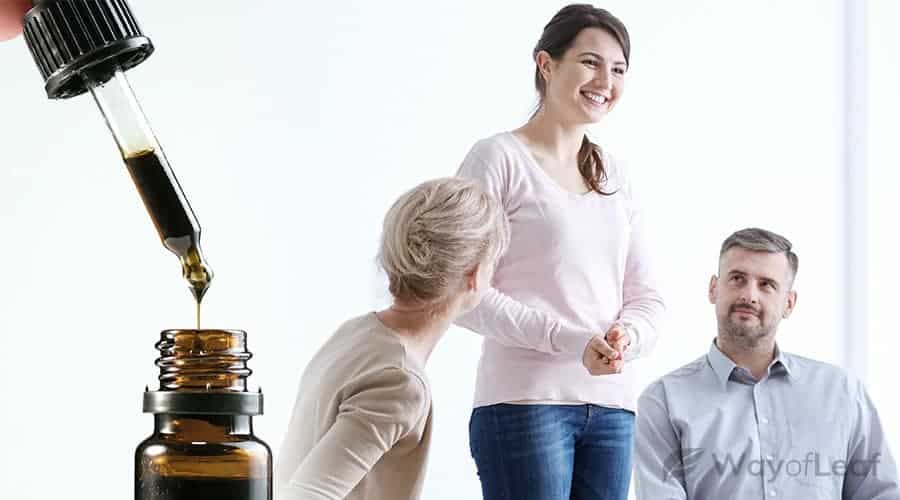 In the case of alcohol abusers, the consumption of alcohol entirely bypasses this requisite behavioral change. It overrides the brain’s reward structures to supplant the desired feelings of happiness and satisfaction.

On a side note, this is why alcoholism presents such a challenge in terms of its progression as a disease. Individuals don’t want to acknowledge the reward structures in their brains telling them to change their behavior, so instead, they drink. The more alcohol they consume, the more unhappy they become. Thus, the more they feel they need to drink, and this vicious cycle continues.

A Quick Look at the Endocannabinoid System

All mammals have an endocannabinoid system (ECS) which plays a role in regulating various processes such as:

How Does Alcohol Affect the Endocannabinoid System & What Can CBD Do About It?

All of the reward structures in the brain, the amygdala, basal forebrain, etc., are home to a significant density of CB1 receptors. These receptors play a crucial functional role in helping to implement feelings of reward, satisfaction, and overall well-being, amongst other things.

What effect does the consumption of alcohol have on the abundance and availability of CB1 receptors in the brain? Not a good one, as it turns out.

A 2014 study measured the abundance of CB1 receptors in abusive (alcoholic) and non-abusive (social) drinkers. The researchers found a severely diminished prevalence of CB1 in alcoholics, even after prolonged periods of abstinence. This contrasted sharply with a healthy presence of the receptor among social drinkers after the same period of abstinence.

When someone consumes alcohol, it directly bypasses the normal physiological mechanisms responsible for reward behavior. It supplants the natural functional role of endocannabinoids regarding their ability to communicate with the brain’s reward structures.

From a physiological standpoint, one of the hardest parts of giving up alcohol is that the body lacks some of its natural mechanisms to cope with everyday things like stress and anxiety without the adequate presence of endocannabinoids.

However, this is when the therapeutic effects of CBD come into play. CBD is a natural replenishment to the body’s supply of endocannabinoids, which may be depleted throughout long-term alcohol abuse and reliance.

CBD for Alcoholism: What Does the Research Say?

More studies are necessary for CBD to become a conventional treatment option for alcoholism or other forms of abuse and addiction in the future. However, the available research offers a glimmer of hope.

In 2015, researchers published a peer-reviewed article in Substance Abuse. It identified CBD’s ability to function as a modulator for several neuronal circuits disrupted during long-term addiction. The article recognized CBD’s ability to provide a “stand-in” mechanism for the brain’s reward structures to communicate without naturally-occurring endocannabinoids.

In 2018, an animal study evaluated the “anti-relapse potential of a transdermal CBD preparation in relation to drug-seeking, anxiety, and impulsivity.” In their study, the researchers used rats with histories of alcohol and cocaine self-administration. They gave the rats transdermal CBD at 24-hour intervals for seven days. Then they tested for “context and stress-induced reinstatement, as well as experimental anxiety.”

The results of the study were promising. The research team found that CBD reduced both “context-induced and stress-induced drug seeking without tolerance, sedative effects, or interference with normal motivated behavior.”

The researchers also found that even after they terminated the treatment, drug-seeking behavior in the rats remained attenuated up to five months later. This happened despite plasma and CBD levels only being detectable for three days after the study.

Furthermore, the study found that CBD helped reduce experimental anxiety and “prevented the development of high impulsivity in rats with an alcohol dependence history.” The researchers said that the study provided “proof of principle” that CBD is useful for relapse prevention in two particular dimensions.

Is There Any Other Relevant Research on CBD for Alcoholism?

Yes. In 2019, a systematic review aimed “to evaluate the credibility of CBD as a candidate pharmacotherapy for alcohol use disorder (AUD).” Researchers looked at 303 different articles on the subject and found that only 12 met the criteria for their review. Of these 12 articles, eight studies used rodent models, and only three included healthy adult volunteers. The other was a study that used a cell culture.

In the rodent models and the study that used cell culture, CBD appeared to “exert a neuroprotective effect against adverse alcohol consequences on the hippocampus.”

Their systematic review concluded that CBD “attenuates cue-elicited and stress-elicited alcohol-seeking, alcohol self-administration, withdrawal-induced convulsions, and impulsive discounting of delayed rewards.” This conclusion was based on the findings of the rodent studies. They also noted that in human studies, CBD was “well-tolerated and did not interact with the subjective effects of alcohol.”

Could CBD Help with Alcohol Withdrawal?

There is a suggestion that CBD could reduce the effects of certain alcohol withdrawal symptoms such as anxiety, nausea, and irritability. However, we should point out that most studies on CBD’s impact on these symptoms did not involve volunteers with AUD.

A 2019 study published in the Brazilian Journal of Psychiatry investigated the effects of CBD on anxiety in 57 adult males. The volunteers received either a placebo or 150mg, 300mg, or 600mg of CBD before completing a simulated public speaking test (SPST). The researchers obtained subjective ratings on the Visual Analogue Mood Scale (VAMS) and physiological measures, including heart rate and blood pressure.

There is a clinical trial in progress that aims to analyze the use of CBD for the treatment of alcohol withdrawal. The trial, which takes place in Sydney, Australia, involves 52 volunteers who will consume either a placebo or between 800mg and 1200mg of CBD per day via capsules. It will be interesting to see the outcome of this particular trial.

How to Use CBD Oil for Alcoholism/Alcohol Withdrawal

Those using CBD for alcohol withdrawal or an AUD, in general, should note that there is no defined recommended dose, and that there is no scientific evidence as of yet that it will be effective.

There are numerous ways to consume CBD, including:

CBD oil is the most popular form of the cannabinoid and involves placing drops beneath the tongue, holding them for 60-90 seconds, and swallowing. However, not everyone enjoys the taste or texture of CBD oil. In this case, CBD capsules or gummies are viable alternatives. Gummies have a pleasant taste, whereas capsules have no taste at all. Both are easy to swallow and also allow for accurate dosing.

Consuming vape juice requires the purchase of a vaporizer. While this consumption method offers faster effects, there are concerns over the health effects of vaping.

So far, the findings from animal studies point toward CBD having promise as a potential pharmacotherapy for alcohol use disorder (AUD). In addition to the many positive findings regarding CBD use in these studies, researchers have noted that cannabidiol is well tolerated in human studies.

CBD’s tolerability, coupled with the absence of abuse liability, further enhances the prospect of CBD being useful as a treatment for AUD in the future.

Below, we have included information on several CBD brands worth consideration. Each company has a positive reputation for providing high-quality cannabidiol products derived from hemp.

4
7 min read
Video
Join the discussion
TOC
Premium
Your subscription has ended
If you love cannabis and want to support our site, join WayofLeaf Premium today and unlock
Best of all, part of your membership fee will go towards supporting the fight to legalize cannabis.
Sign Up for WoL Premium
Not now
I already have an account
×
Log in to Your Premium Account