Dementia is not a single specific condition. Instead, it is an umbrella term used to describe a variety of symptoms such as memory loss and a decline in problem-solving skills. Such changes are often minor at the beginning, but over time the changes in memory, behavior, and mood can get so severe that the afflicted individual struggles to cope with everyday life.

The primary cause of dementia is brain cell damage. The brain cells lose their ability to communicate with one another and the result is a change in feelings and behavior and a disruption in normal thought patterns.

The brain has several distinct regions, and each one is responsible for a variety of functions such as movement, judgment, and memory. Once the cells in a section of the brain are damaged, that area of the brain can’t conduct its normal functions.

Different forms of dementia are associated with specific regions of the brain. For instance, Alzheimer’s disease patients have excessive levels of proteins both inside and outside of their brain cells, making it difficult for brain cells to remain healthy and continue communicating properly. As a result, memory loss is one of the first signs of Alzheimer’s.

Up to one-third of seniors die with a form of dementia, affecting not only the patient suffering from the disease but their loved ones as well. Early and accurate diagnosis of all types of dementia could save almost $8 trillion in medical and care costs.

Alzheimer’s disease is a debilitating condition and it is heartbreaking to see a loved one afflicted. This is why some families are using CBD to help manage symptoms of people with Alzheimer’s and other types of dementia. The major question is: does it really work?

We will look at the research later in this article, but first, let’s take a look at what happens to those suffering from dementia.

Alzheimer’s is by far the most common form of the condition, but there are several types, including:

The Alzheimer’s Association suggests that there are ten signs of the condition:

At present, there is no standardized test for dementia. Physicians diagnose the different forms based on a physical examination, lab tests, reports of a patient’s issues with day-to-day functions, and their medical history. Common risk factors such as genetics and age can’t be changed, but modifiable risk factors like exercise and diet could reduce the likelihood of developing dementia.

Individuals with the condition will progress through the stages at different speeds and will experience different symptoms.

Early diagnosis enables patients and their families to make plans for care and also offers the opportunity to participate in clinical trials. Treatment of the condition will depend on its cause. Proponents of CBD, a non-intoxicating compound in marijuana, claim it is capable of slowing down the symptoms of dementia, especially in Alzheimer’s patients.

Could CBD Oil Help Dementia Patients… And Is It Safe? 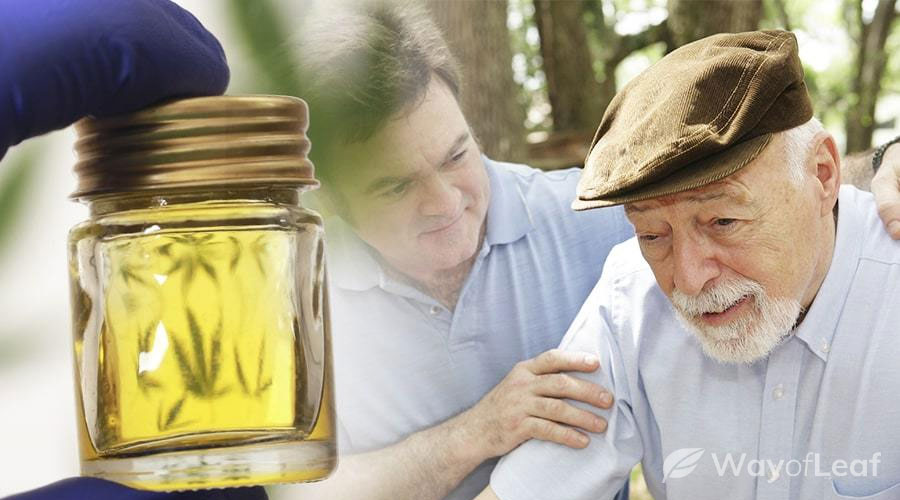 Humans have used the cannabis plant to help treat a variety of medical conditions for thousands of years. It interacts with the body’s endocannabinoid system (ECS) and cannabinoid receptors that are located throughout the body. The CB1 receptors in the ECS affect the nervous system and brain, and it is this receptor’s relationship with cannabis that could hold the key to alleviating dementia symptoms.

According to Dr. Dustin Sulak, small doses of cannabinoids such as CBD give the body a signal to create more endocannabinoids and build more receptors. A greater number of receptors increases your sensitivity to cannabinoids, which is why it can take several uses before you feel an effect.

A 2017 WHO report* found that CBD is not a compound with high dependence or abuse potential. CBD doesn’t provide the intoxicating high that we find with the use of THC-containing cannabis, and it actually diminishes the psychoactive effect of THC. As a result, experts generally consider it safe for the elderly.

Studies on the Impact of CBD on Dementia

A study* led by Professor David Schubert of the Salk Institute in California, published in the Journal of Neurochemistry in 2017, found that CBD and THC could help remove dangerous, dementia-causing proteins from the brain. In the study, the research team found that a small dose of synthetically produced cannabinoids led to the removal of a toxic plaque associated with dementia.

Amyloid-beta is a protein that creates a dangerous plaque in the brain, thereby destroying brain cells.

Scientists believe that amyloid-beta accumulates in the walls of the brain cells before Alzheimer’s symptoms become apparent. Schubert spoke of his frustration with the existing cannabis laws. He said: “It’s blatantly obvious that this plant should be studied in greater detail.”

Another study*, led by Andreas Zimmer of the University of Bonn, looked at the potential of cannabis to improve the memory and learning capabilities of older mice. Nature Medicine published it in 2017. The team found that small doses of THC improved the learning skills and memory of the mice.

Back in 2004, a study* by Iuvone et al, published in the Journal of Neurochemistry, found that cannabidiol also offered a neuroprotective effect. The team looked at the effects of CBD on beta-amyloid peptide-induced toxicity in cultured rat cells. When the cells were exposed to beta-amyloid peptide, a significant reduction in cell survival was recorded. When the cells were treated with CBD, cell survival was “significantly elevated.”

Final Thoughts on CBD and Dementia

For many patients with dementia, it can be a long and lonely road ahead. The symptoms of dementia can slowly but surely lead to deleterious effects on memory and mood and make it difficult to perform daily tasks. However, recent research into the impact of CBD on the symptoms of dementia conditions such as Alzheimer’s offers a ray of hope.

While the psychoactive compound, THC, could potentially remove amyloid clumps in the brain – which are a hallmark of Alzheimer’s – CBD may potentially have a similar effect, and CBD is known to aid in the antioxidant process that reverses signs of aging in all organs of the body.

One thing we know is that research needs to continue so we can see if these promising beginnings turn into something more concrete.