CBD has grown in popularity over the past few years. It is now in almost every type of health and beauty product imaginable, including items like CBD shampoo. Proponents suggest that it has a variety of benefits for hair and scalp health, but is this really the case?

In this article, we investigate whether CBD can benefit scalp health, and how individuals can use it for maximum effect.

CBD is one of the many medicinal compounds in hemp (cannabis) plants. It works by interacting with the body’s endocannabinoid system (ECS), which is composed of a network of endogenous and exogenous cannabinoids and their receptors. The ECS plays a crucial role in maintaining a state of balance throughout the body and mind.

The ECS plays a crucial role in maintaining a state of balance throughout the body and mind.

In addition to interacting with endogenous ECS receptors, CBD can also influence cell receptors outside of the ECS. This includes binding to TRPV1 receptors, which are receptors that play a role in the perception of heat and pain.

In terms of scalp health, all of these different receptor types exist in the dermal layers of the scalp. Endocannabinoids have even been found in “certain cell populations of hair follicles,” so it stands to reason that CBD could hold potential in terms of influencing scalp health.

Many different issues can affect the scalp, and some are extremely common. Here are just a few of the most widespread scalp problems, and how CBD might be able to help: 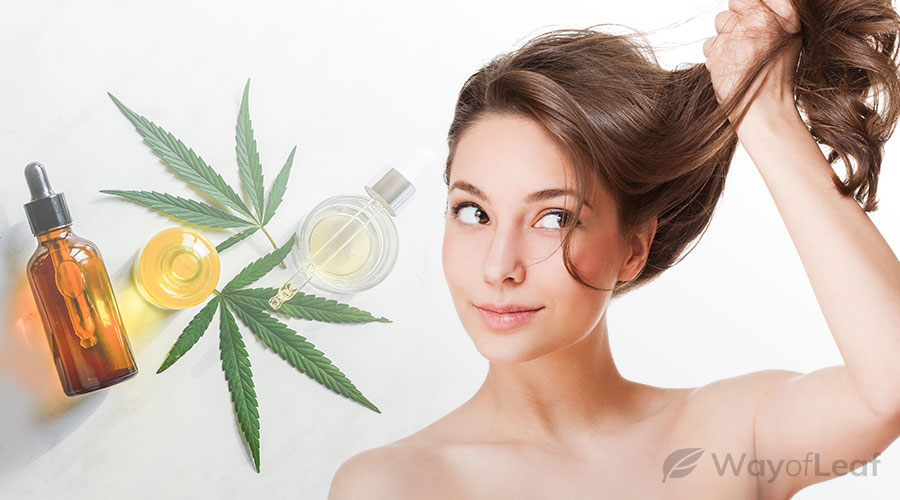 As many as 25% of adults may suffer from an itchy scalp. The problem often occurs alongside other issues such as dandruff, dermatitis, or psoriasis, which we will discuss in detail later.

An itchy scalp can also be the result of nerve damage due to diabetes or herpes zoster infections. However, in some cases, there is no apparent physical cause.

The scalp produces large amounts of an oil called sebum, which helps to protect the skin and hair. It also controls the microbiota of the scalp, which is the population of microorganisms (including bacteria and yeast) that naturally live on the skin.

One particular genus of yeast known as Malassezia has an intimate relationship with sebum. They convert it into free fatty acids, leaving a residue on the scalp. If this residue becomes excessive, it can cause scalp itching and irritation. It also contributes to problems like dandruff.

It is possible that, by interacting with endocannabinoids, endocannabinoid receptors, and/or receptor-independent pathways, CBD could help to relieve itching on the scalp.

In fact, a 2006 study by Ständer and colleagues for the journal Der Hautarzt found that 14/22 patients who applied a topical cannabinoid cream, experienced a reduction in itchy skin. The average decline was 86.4%.

However, the study used the cannabinoid n-palmitoyl ethanolamine (PEA), not CBD. PEA works by directly influencing cannabinoid receptors in the ECS. Although CBD is a different compound, it could have similar effects.

We also know that CBD reduces sebum production. Therefore, it could potentially relieve scalp itching that stems from overly productive sebaceous glands. However, more research is necessary to confirm how effective it is.

Dandruff is another common scalp problem that affects up to 50% of adults. As well as causing itching and irritation, dandruff can be a cosmetic concern due to the flakes that it produces. Like an itchy scalp, dandruff is often related to sebum production and yeast overgrowth.

How CBD Could Help Dandruff

CBD may help dandruff in many of the same ways it could relieve itching. In fact, reducing itching could also limit scratching, which often leads to a flaky scalp.

There is currently no research specifically on CBD oil for dandruff. However, there is some evidence that it helps with the maintenance of healthy skin. Therefore, anyone suffering from this common condition could give CBD-infused products a try.

Yet another condition associated with sebum, yeast, itching, and dandruff is seborrheic dermatitis. In addition to the above symptoms, this skin condition can also cause redness and lesions on the scalp. It is a common problem in babies, where it is known as cradle cap. Seborrheic dermatitis can also affect other sebum-rich areas of the body, such as the face and chest.

How CBD Could Relieve Seborrheic Dermatitis?

The primary cause of seborrheic dermatitis is the overproduction of sebum. A 2014 study by Olah and colleagues for The Journal of Clinical Investigations found that CBD has sebostatic effects, meaning it inhibits the release of sebum.

Most of the research to date has focused on how CBD could help acne. However, in combination with its anti-inflammatory effects, CBD could potentially provide an effective treatment for seborrheic dermatitis too.

Psoriasis is an autoimmune skin condition in which skin cells grow too rapidly, forming thick patches known as plaques. Plaques are often itchy, red, and covered in scales.

One of the most common areas affected by psoriasis is the scalp. In fact, as many as 80% of patients with psoriasis have it on their head.

One primary concern associated with scalp psoriasis is that it can also lead to hair loss. Therefore, in addition to suffering the various discomforts of the disease itself, people with psoriasis often feel self-conscious about their appearance.

How CBD Could Benefit Scalp Psoriasis?

A 2007 study by Wilkinson and Williamson for the Journal of Dermatological Science found that cannabinoids could have beneficial effects on psoriasis. The researchers tested CBD, THC, CBG, and CBN on human keratinocytes (skin cells), and results showed that all of the compounds inhibited cell proliferation in a “concentration-dependent” manner.

Furthermore, CBD appears to dampen the immune response, which is why it is such an effective anti-inflammatory. Therefore, it could have some benefits for autoimmune conditions like psoriasis.

It is normal to lose up to 100 hairs every day, but these hairs usually grow back relatively quickly. However, in some cases, they do not, leading to alopecia (hair loss).

There are many different types of alopecia. Some of the most common forms include:

In some cases, the hair will grow back on its own. In other cases, it will not. Therefore, alopecia can be very distressing for those it affects.

Whether CBD can help with alopecia depends on the underlying cause. For example, there is probably little it can do to help with age-related male-pattern baldness, as this is a natural process that genetics largely control.

However, as we mentioned earlier, endocannabinoids do exist in hair follicles. This suggests that they may play some role in the hair growth cycle.

That said, the exact function of endocannabinoids in hair follicles is not clear. (In fact, one study suggests that the endocannabinoid anandamide may actually reduce hair growth).

Therefore, much more research is necessary before we fully understand whether CBD can help with hair loss.

How to Use CBD Oil for Scalp Health

The most effective way to use CBD oil for scalp health is by applying it directly to the head. This avoids it passing through the digestive system, where many of its active components are lost.

There are many different topical CBD products available. However, few of these are suitable for applying to the scalp. This is why some companies have started making CBD-infused shampoos and other hair-specific products.

The most effective way to use CBD oil for scalp health is by applying it directly to the head.

Applying CBD oil to the scalp may be beneficial for people with one or two small problem areas, but applying it to the whole scalp would rarely be practical. Not only would it leave the hair greasy, but it would also get expensive fast!

With this in mind, individuals can make their own CBD scalp oil and use it as a deep treatment once or twice a week. Here’s a recipe that we love:

Massage the oil into the scalp once or twice weekly as necessary. It is quite greasy, so you may wish to apply it for a couple of hours before washing the hair with a mild shampoo. Test on a small patch of skin first to ensure no irritation occurs.

Although the clinical evidence is limited, it appears that CBD may have several benefits for scalp health. It may help to reduce sebum production, control fungal overgrowth, relieve itching, and more.

Furthermore, CBD topicals have a very low risk of side effects, so there is little danger in giving them a try. However, anyone already using medicated scalp products should check with a pharmacist or physician first.