Medically reviewed by Lynn Marie Morski, MD, Esq.
Written by Georgia Smith, B.Sc
4 min read
0 comments
Read Later
All information on this website is for general informational purposes only and is not intended or implied to be a substitute for professional medical advice, diagnosis or treatment.

The results from the limited amount of available research on cannabis and liver disease are largely contradictory in nature. Studies dating back to the early 2000s seem to suggest a negative impact of cannabis on liver health. However, more contemporary publications observe the potential for cannabis – including CBD – to be used in “the symptom management and treatment of various liver diseases.”

This article discusses these and other publications relating to cannabis and liver health in more detail. Whether you’re a frequent cannabis user concerned about the long-term effects of marijuana on liver health or a patient suffering from liver disease and are considering cannabis as a potential treatment option, read on to find out more.

How Cannabis Interacts with the Liver

The liver is one of the most important organs in the human body. It performs over 500 functions, including detoxification, bile production, and metabolism of chemical compounds — including active compounds found in medication, drugs, and alcohol.

The liver is also vital in various digestive processes and is critical in the production of plasma proteins in the blood. Unhealthy lifestyle factors, including excessive alcohol consumption, can contribute to the degradation of the liver’s structure and function.

The ECS is a complex cell-signaling system thought to play a role in modulating a range of processes and functions. These functions include sleep, mood, appetite, energy, memory, inflammation, and immune response.

ECS components are active in the body, even among individuals who don’t use cannabis.

Like endocannabinoids, phytocannabinoids (including CBD and THC) found in the cannabis plant can influence ECS activity.

According to one review, affecting the CB1 and CB2 receptors of the ECS has varying effects on cirrhosis, a disease characterized by damage and scarring of the liver. Activation of CB1 contributes to scarring, while activation of CB2 counteracts it. And deletion of CB1 improves scarring and fat buildup, while the deletion of CB2 increases fat buildup and inflammation. Of note, these findings were from studies done in vitro or in rodents.

Let’s delve into some additional research to find out more.

The Potential Benefits of Medical Cannabis for Liver Disease

Some research suggests that CBD and THC may benefit fibrosis – the process of scar tissue replacing healthy tissue in the liver. Severe fibrosis of the liver causes cirrhosis.

Authors of a 2018 publication in the academic journal Medicines (the same review mentioned above) observe how the ECS demonstrates “powerful anti-fibrogenic [and] profibrogenic properties … that can be pharmacologically manipulated to potentially treat cirrhosis at the histologic level.” 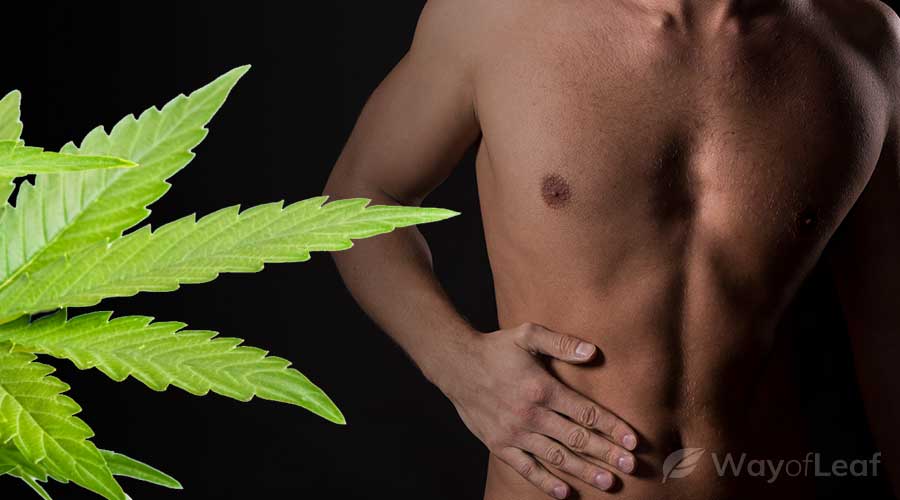 The authors also observed the ability of THC to suppress hepatic myofibroblast cells. These cells are not widely present in healthy livers, but they are abundant in damaged tissue (such as that seen during liver failure). By reducing the proliferation of hepatic myofibroblasts, it’s possible that THC can slow down the progression of serious liver disease.

Here are several other ways in which cannabis could improve symptoms relating to liver disease:

A 2007 study published by Plos One reported that dependent cannabis users have a 52% lower chance of developing obesity-related non-alcoholic fatty liver disease (NAFLD). The study suggests that cannabis use is “associated with reduced prevalence of obesity and diabetes mellitus (DM) in humans…[both of which] are a well-established risk factor for non-alcoholic fatty liver disease (NAFLD).”

A 2018 study published by The National Library of Medicine looked at how cannabis affected liver disease development in alcoholics. Similar to the study referenced above, results indicated that cannabis users had a reduced chance of developing liver disease than non-users.

According to a 2011 study, CBD can improve mental functioning and decrease inflammation among patients with hepatic encephalopathy, a brain-functioning impairment related to cirrhosis.

Related article
Effects of CBD Oil on Your Liver: Is It Bad?

We look at the effects of this…

Despite the perceived benefits of medical cannabis on liver health, there is currently no clinical data or evidence to suggest that medical cannabis can treat – or heal – any form of liver disease.

To completely cure a liver disease would mean to reverse tissue damage, which isn’t yet possible.

Although many studies suggest the beneficial use of medical cannabis for liver disease, the potential benefits have not yet been established in clinical trials. It’s also important to reiterate that some studies have observed the potential for cannabis to worsen liver diseases such as hepatitis.

Lastly, Dr. Hardeep Singh, a gastroenterologist from St. Joseph Hospital in Orange, California, suggested in a statement to Healthline that individuals produce varying responses to the presence of cannabinoids. He suggests these responses can ultimately determine whether an individual experiences positive or negative effects in terms of cannabis use and liver health.

Cannabis appears to produce different effects depending on the specific disease state of an individual. Furthermore, the medical community lacks the appropriate clinical data needed to come to a conclusion regarding the broad-scale effects of marijuana use on liver function.

Always consult with your doctor before using medical cannabis for a liver-related condition.