Written by Editorial Team
3 min read
0 comments
Ginger Ale Strain Overview
Intensely flavorful and massively sedating, this is a strain that will leave you glued to your couch. The Ginger Ale strain is best-suited to evening use and is a popular choice for insomniacs due to its soporific effects. 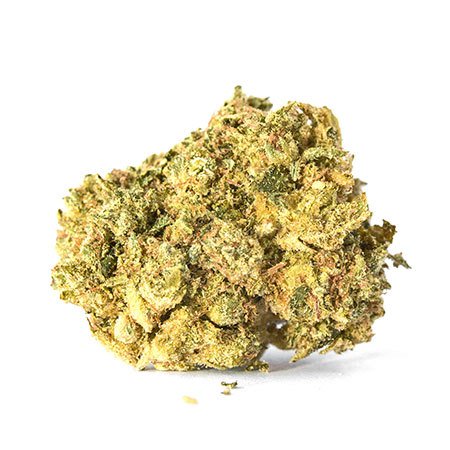 There are untold numbers of soft drinks available these days, all with their own unique flavor. Similarly, there are lots of marijuana flavors out there. Surely there must be one that has precisely the taste that you want?

But how likely is it that you can experience the taste of your favorite soft drink in a marijuana strain? For lovers of ginger ale, that might seem improbable – but think again.

Read on to find out more about the aptly-named Ginger Ale strain.

What Is the Ginger Ale Strain?

The Ginger Ale strain is a cross between Cinderella 88 and Café Girl, two intriguingly rare strains. Ginger Ale is a 50:50 hybrid and an exceptionally potent marijuana strain known for its strong effects.

This strain needs to come with a severe warning; it is not for novice cannabis consumers.

Its THC content ranges between 20-25%, and its indica effects are heavily-sedating. With Ginger Ale, it’s highly likely that you’ll end up glued to your couch for the evening.

However, the good news is that the initial cerebral buzz is uplifting and euphoric before the physical effects take over. Due to the nature of this strain’s effects, it is best suited to evening time use.

Considering this strain’s name, it would make sense to assume that it has a primarily ginger aroma. However, this isn’t the case. Instead of the overt spiciness of ginger, it has a mostly floral, slightly tangy aroma. It is only when you break open the buds that you recognize its ginger smell.

Ginger ale’s spicy, sweet, and vaguely floral flavor makes it one of the world’s most popular soft drinks. So, how does the Ginger Ale strain’s flavor compare to the tasty soft drink?

Well, after breaking open the buds and starting smoking, you really get to experience the full force of its flavor. The prominent flavor is a very distinct sweet, spiciness that tastes like, well, ginger ale!

Ginger Ale’s buds are compact and dense. There is plenty of tidy green and vaguely yellow coloration underneath the bud as well. However, you almost have to dig through the trichomes and pistils to find it.

Ginger Ale seeds are tough to come by, as are clippings for cloning. You will have a hard time finding it in dispensaries. However, If you are lucky enough to know someone who’s growing it, you can use a cutting from their plant.

Ginger Ale’s grow information is hard to come by due to its limited availability. However, its growth difficulty is reportedly moderate and its yield high, without being precisely quantified.

The critical thing is to keep it well trimmed and fed with high-nitrogen feed. Otherwise, you are unlikely to get a high yield at the end.

Ginger Ale plants grow tall; therefore, you will need to top the plant to keep its height under control. This will also help to promote lateral growth and increase bud production.

Ginger Ale’s flowering period is approximately 8-9 weeks indoors and should be ready for outdoor harvesting around late September.

The highest THC level in a Ginger Ale sample reportedly was 25%.

Perhaps, Ginger Ale’s primary health benefit comes from its soporific effects. Many say that this stain is useful for insomnia due to its heavily sedating and drowsiness-inducing effects.

Due to its potent physical effects, some say that Ginger Ale effectively alleviates chronic pain conditions like arthritis. Some also may find pain relief from muscular aches and pains using this strain.

Possible Side Effects of the Ginger Ale Strain

The main adverse reactions associated with the Ginger Ale strain are dry mouth and dry eyes. However, due to its potent THC level, it can cause other side effects as well.

Some have experienced heightened paranoia and anxiety after consuming this strain. Others say that they have felt dizzy or had a headache after using the Ginger Ale strain.

Again, if you are an inexperienced cannabis user, you should avoid this strain. More seasoned cannabis consumers should also be careful with the amount they consume.

The main things to note about the hard to find Ginger Ale strain are its potency and its heavily-sedating effects. You are almost guaranteed to become couch-locked, so be sure to save it for a lazy evening in front of the TV. Also, novices should avoid this strain entirely as its effects are far too overwhelming for an inexperienced cannabis consumer.