Written by Editorial Team
7 min read
0 comments
Read Later
All information on this website is for general informational purposes only and is not intended or implied to be a substitute for professional medical advice, diagnosis or treatment.
Triangle Kush Strain Overview
Triangle Kush is an indica cannabis strain that uplifts, calms and relaxes. Its high THC content level provides a good body high without too much drowsiness and an energetic, cool, let-down. 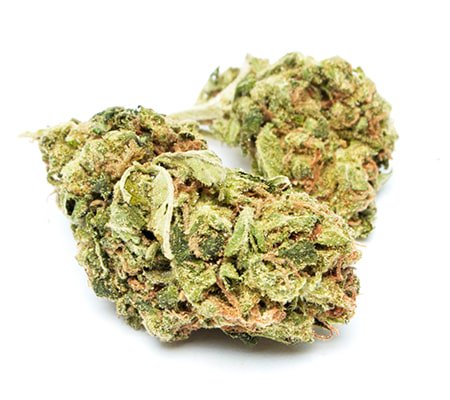 Triangle Kush gets its name from the triangle in which the strain originates: The Emerald Triangle of Florida. The Emerald Triangle is the area between the cities of Jacksonville, Miami, and Tampa, which are perhaps the capitals of cannabis growth in the Southern United States. Besides the Bermuda Triangle, it is probably the most well-known triangle on the planet due to the high-quality bud which often is produced in this region.

The Triangle Kush strain is an 85% indica 15% sativa strain of cannabis – so it’s an indica dominant strain. It also has some pretty potent THC levels, averaging in around 26% THC, so brace yourself for the intense high you will experience from Triangle Kush. The taste is also just as intense as the high – with a sour lemon, diesel, pine, and earth flavor. It will hit your tastebuds pretty hard as the flavor is quite pungent, yet at the same time refreshing.

The Triangle Kush strain has been touted as a great strain for artists as it can help you to feel relaxed and bring about creativity and intense focus. It has also been noted that people become quite talkative after smoking Triangle Kush, so it can be great for social events, debates, and discussions as well. The Triangle Kush strain is a creeper so it will take a longer time for it to kick in, but once it does kick in, the effects can be felt for quite a while.

In this review, will be taking a look at all the ins and outs of Triangle Kush to give you the lowdown on this gem of a strain. Read on for a complete breakdown on Triangle Kush.

What is the Triangle Kush Strain?

Triangle Kush is a primarily indica strain of cannabis, being around 85% indica and 15% sativa. Its origins are a bit ambiguous and it is generally thought that it is a descendant of the OG Kush strain, which is a Florida favorite. Despite being an indica though, it has pretty high THC levels and low CBD content. The Triangle Kush strain of weed usually averages in around 26% THC.

This strain is named after the three cannabis capitals that form the Emerald Triangle: Tampa, Jacksonville, and Miami.

The high you experience is pretty intense and can make you feel quite stoned. It has been known as a great strain for those in the creative field due to its ability to make you feel more creative and much more focused. After the mental high, you will experience a body high that will have you feeling like you are sitting on a cloud. You may also feel a burst of energy and be able to combat things such as fatigue and tiredness.

Enthusiasts also use this strain medically for ailments and conditions such as pain, migraines, nausea, muscle spasms, muscle inflammation, and also glaucoma. In addition to the effects, the flavor of Triangle Kush is quite unforgettable, as it is really pungent and sour. Many describe it as having a citrusy and lemon-like taste, with diesel and wood undertones. It is quite spicy and earthy, and the lemon citrus sourness of the strain makes it quite strong. The strain is also elegant and beautiful – with its deep green buds and dark amber-colored hairs. To top it all off, it has a coating of crystal white trichomes that are gently dusted over the top.

Aroma: At first whiff straight out of the jar, the fragrance of the Triangle Kush marijuana strain may be very sour. You may notice a slight lemon note with floral and earthy undertones. You may also notice something that smells like fuel or diesel, so it can be very pungent at first whiff.

Flavor: If you think that the aroma is quite strong, the flavor of Triangle Kush strain will be even stronger. The earthy and lemony taste will hit your tastebuds quite hard. Many describe it also as being spicy and woody, which makes for an even more interesting combination in flavor.

Appearance: The buds of the Triangle Kush strain are usually deep forest green in color and have dark orange to amber-colored hairs. On top of it all, however, is a light dusting of snow-white trichomes, which make it an incredibly beautiful bud to look at as well.

If you are wishing to grow some of your own Triangle Kush, you may need a bit of experience with growing cannabis, as this is not a typically easy strain that is suitable for beginners. Since it is an indica-dominant strain, however, it can hold up to weather changes and harsher conditions, so that is a plus. If you are going to be growing Triangle Kush indoors, it’s going to require a lot of work and upkeep.

The environment should be pretty warm and rich in carbon dioxide. The temperature should not go above 88 degrees Fahrenheit, despite how warm it should be kept. You also need to clip the plants, because they can grow to be pretty tall as well. It usually takes about 10 to 12 weeks to start seeing flowers on the plant and for buds to form. With all this work, however, it still does not yield very much bud per square meter – only about 10 oz of bud can be expected from each square meter of plant. But many think that it is well worth it considering the nice high and unique flavor of the strain.

If growing outdoors, it may be a little less work and more easy to grow Triangle Kush. As long as you have a dry and hot climate, Triangle Kush should start to blossom by late October. It produces about 10 to 12 oz of bud per plant. So depending on your situation and if you have the proper environment to grow Triangle Kush, you can do it outdoors much more easily. But if you are limited to indoors, a little extra work will be required, but it can still be done. Triangle Kush strain seeds are available from some niche growers or breeders as well as from some online retailers.

The highest THC content from the Triangle Kush cannabis strain has been measured at around 26%.

There is practically no CBD in the Triangle Kush strain, as it usually comes in around 0 to 0.5%  CBD total.

Although the Triangle Kush strain has a very low CBD content, usually at 0 to .5%, the medicinal benefits can still be found. The real medicinal aspect of this strain is found in its mental properties. It is not typically known as a medicinal strain of marijuana and it does not boast a huge array of medical benefits, but it still does not mean that it cannot help people medicinally.

Because it can induce a euphoric effect, the strain has been used by many people for depression. It can also help to boost your mood and relieve stress, which can also help in the depression aspect. It produces a very relaxing body high that can help soothe your muscles and act as a pain reliever as well. Due to its ability to make you sleepy and sedated, it has also been used for conditions such as insomnia. Many people who suffer from a loss of appetite also find that Triangle Kush is a great strain to help them eat again, as it increases the appetite.

So overall, even though it is not a medicinal strain of marijuana, Triangle Kush still has many profound mental effects, as well as physical, that it can help with.

Possible Side Effects of the Triangle Kush Strain

Just as with most strains of cannabis, there comes the risk of some side effects. Luckily, the most common side effects of the Triangle Kush strain are simply dry mouth (or cottonmouth) and dry eyes. These side effects are mild though, and can often be mitigated through drinking water before and during your high with Triangle Kush. Headaches can also occur when smoking this strain, so it’s good to be aware of this.

In addition, Triangle Kush can also potentially cause a bit of paranoia or anxiety due to the high THC levels of 26%. Those who have a low THC tolerance should be wary when smoking Triangle Kush, therefore. If you are new to THC and do not know your tolerance, it is best to start small or to find another strain that is lower in THC until you find out how you will react. But overall, there are not an extremely high amount of side effects associated with this strain and is a pretty safe bet as long as you can handle high amounts of THC.

Originating from such a prestigious and well-known area of the cannabis world, Triangle Kush definitely holds up to that standard. With its relaxing and euphoric high that and can bring about increased creativity and focus, it is a favorite among those working in the creative field such as artists, musicians, and writers. It can also help those in the combat against depression and stress as well due to its euphoric properties associated with the high THC content of this train.

If the relaxing and mood-boosting properties of the Triangle Kush strain were not enough to get you interested, the unique flavor will. With a very pungent and sour lemon, earthy, and pine-like flavor, as well as undertones of diesel and traditional grassy marijuana, Triangle Kush is sure to please your taste buds in a whole new way.

So overall, if you are looking for strain that is perfect for helping to bring about creativity, relaxation, and euphoria as well as help to eliminate minor aches and pains and relax your muscles, Triangle Kush should definitely be on your to-try list. It has such a unique flavor as well, and will surely have you coming back for more.