Written by Editorial Team
5 min read
0 comments
Read Later
All information on this website is for general informational purposes only and is not intended or implied to be a substitute for professional medical advice, diagnosis or treatment.
Kandy Kush OG Strain Overview
Kandy Kush OG packs a potent punch, powered by a strong average THC level of 15-21%, along with a dangerously delicious flavor. The strain is an evenly balanced sativa/indica that was created by combining two California classics; OG Kush and Trainwreck. 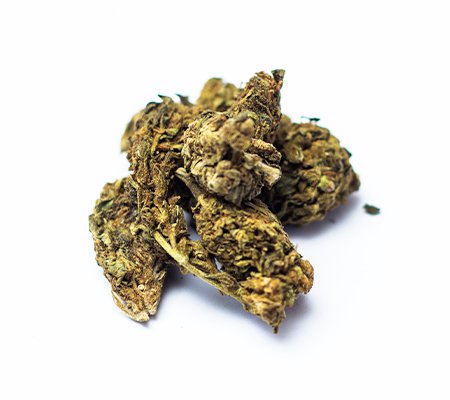 Much like the insanely popular candy crush game that took the world by storm, the Kandy Kush OG strain is sure to get you buzzing. (I mean, anything with the word “kandy” in it must be good, right?)

Once you have tasted this strain’s sweet, candy-like flavor, it’s sure to become one of your all-time favorites whether you’re a rec user or a medical patient.

In fact, Kandy Kush won the very first Western Slope Cannabis Crown, held in Aspen, Colorado, in 2010. It was voted best medical cannabis out of 140 strains. The strain also won third prize in Outdoor Strains at Spannabis Cannabis Champions Cup in 2012. So, it’s one with some serious pedigree and credibility behind it.

Let’s investigate Kandy Kush OG a little deeper, and find out how great it really is.

What Is the Kandy Kush OG Strain?

Kandy Kush is an evenly balanced hybrid strain (50% indica/50% sativa) originally produced by DNA Genetics. It was created by crossing two indica and sativa powerhouses; OG Kush and Trainwreck. According to the breeders, the aim was to combine the OG flavor with the beloved Trainwreck bud structure.

The OG Kush side of the strain brings a tasty, pronounced terpene profile along with therapeutic benefits. Meanwhile, the Trainwreck side brings lemony scents, high commercial yields, and resin production. The sweetness of the strain is courtesy of the OG Kush lineage, hence the name. 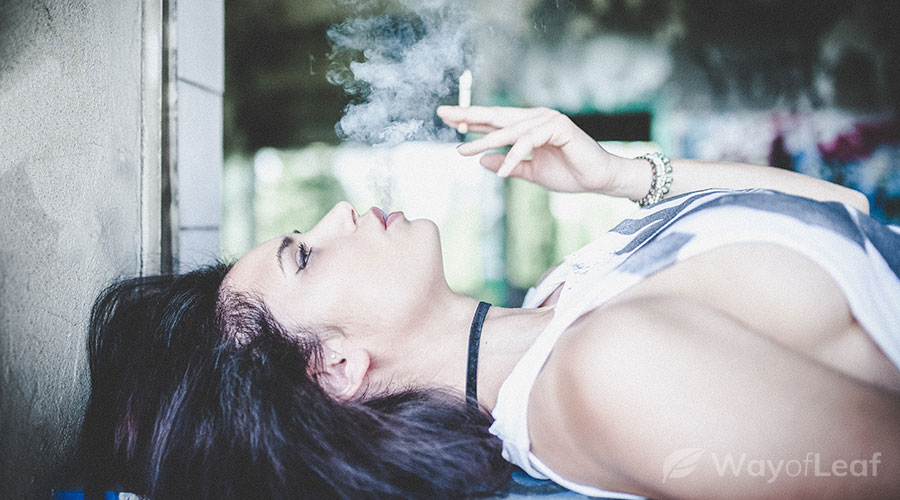 The THC levels average between 15-21%. The high is a creeper, taking several minutes for the full effects to kick in. It begins in the head as cerebral activity rises – uplifting the spirits and bringing negative thoughts to a halt. Soon after, the high moves to the body, relaxing tense muscles and leaning towards a couch-lock stone. This is why it should be used in moderation and/or at the end of the day.

For many users, the sativa effects of the Trainwreck influence in Kandy Kush can overpower the more sedative effects of the OG Kush parent. Generally, the effects are described as euphoric, uplifting, mood-enhancing, and relaxing. The sativa properties result in an initial onset of focus and increased energy levels.

Besides the generally happy mood, some users may also experience a sense of euphoria. So expect to have a blissful smile across your face – and definitely plenty of giggling. Novice users may even fall victim to Kandy Kush’s iconic effects because they are tempted to take a few more puffs just for the taste. But once the sedative-like properties hit the body, you may find yourself motionless and in a peaceful, mindless bliss.

The smell of Kandy Kush OG has been described as a combination of earthy, sweet, and pungent, which makes for an interesting smoke. It’s also characterized by its lemony, sweet, and fruity smell that will remind you of – surprise, surprise – sugar laden candy.

Learn about this delicious str…

Kandy Kush has a sweet and fruity candy-like flavor that, well, does the name well! The taste is pleasant with just the right blend of a sweet berry candy aftertaste and a subtle hint of citrus. Some even describe the flavor as having spicy, pepper-like undertones amidst the sweetness.

The appearance of Kandy Kush can vary dramatically depending on the specific phenotype. The shape can range between being more circular-shaped (like OG Kush) to more oblong-shaped, like Trainwreck. That said, the buds are always dense, which is a characteristic of both the parent strains. Most phenotypes are small, thin plants with large and ridiculously sticky buds.

Kandy Kush can be grown indoors using the Screen of Green (ScrOG) method, with a flowering time between 65 and 75 days. It often produces a good size yield of approximately 140 ounces per square meter. You can also apply the low-stress training (LST) method to help improve the yields.

Due to it being relatively mold-resistant, growing Kandy Kush outdoors and in a cool climate is perfect. In outdoor conditions, it typically produces a yield of about 18 ounces per plant.

Kandy Kush has an average THC level of 18%, but it has been found to reach as high as 21% in some phenotypes.

Also, Kandy Kush is looked at by some users as the king of stress relievers. Although the THC content isn’t remarkably high when compared to some other strains, the calming effects make it a go-to choice for those battling anxiety and daily stress-related problems.

The strain also has pain-relieving properties, which makes it a great option for those suffering from chronic pain – whether it’s due to injury or internal ailments that cause discomfort. Kandy Kush can even be helpful in alleviating more “normal” discomfort, like period pains, thanks to its gentle numbing qualities.

The euphoria-inducing high of Kandy Kush may even work well for bouts of depression and the oft-associated anxiety. Remember that marijuana, in general, can be a useful tool in the fight against neglected ailments like anxiety and depression.

Although depression is considered to be a mental health disorder, it can often have a profound effect on the physical body as well. So while Kandy Kush won’t directly alleviate the physical manifestations of this condition, it may help mitigate them by getting rid of the causes – at least for some time.

Kandy Kush can also be helpful for insomnia and sleep trouble, which is why it’s often recommended as an evening-use strain. It provides a very relaxing smoke, which means it can help put your mind at ease and send you straight off into dreamland with relative ease.

Possible Side Effects of the Kandy Kush OG Strain

As with many other marijuana strains, the side effects of Kandy Kush are minimal, and the side effects it does produce are rarely anything to be concerned about. Headaches, anxiousness, and dizziness are possible, but unlikely.

Dry eyes and dry mouth are what you need to worry about – or at least deal with – but again these are easy to bypass with just a little preparation.

Kandy Kush OG is a great option for both medicinal and recreational marijuana users. It’s a potent strain that can be helpful in relieving stress, anxiety, and pain, and it provides rec users with a brilliant high and a sense of calmness and bliss after just a few puffs.

Kandy Kush has a decent quantity of THC (upwards of 18%), yet still tastes delicious like some of your favorite candy treats.

Just be sure not to over-consume – the sudden head rush and mouth-watering flavor can fool novice users into wanting to take one puff more than they can handle.

This tropical and exotic strain is juicy and uplifting

13
8 min read
Video
Join The Discussion
TOC
Premium
Your subscription has ended
If you love cannabis and want to support our site, join WayofLeaf Premium today and unlock
Best of all, part of your membership fee will go towards supporting the fight to legalize cannabis.
Sign Up for WoL Premium
Not now
I already have an account
×
Log in to Your Premium Account