Written by Editorial Team
5 min read
8 comments
Read Later
All information on this website is for general informational purposes only and is not intended or implied to be a substitute for professional medical advice, diagnosis or treatment.
Rainbow Kush Strain Overview
Rainbow Kush is one of the most colorful cannabis strains on the market today. You’ll feel like you’ve found your ‘pot’ of gold at the end of the rainbow after you’ve experienced this strain’s deeply relaxing effects. 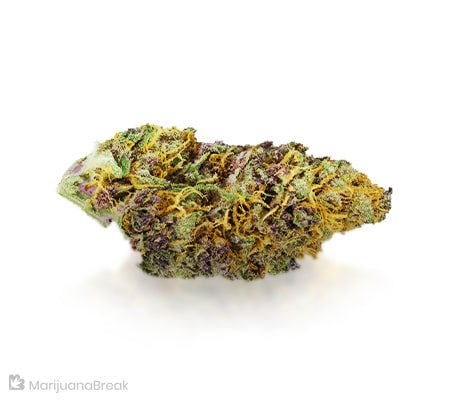 Taste all the colors of this cannabis rainbow…

Surely, a rainbow-colored cannabis strain sounds just too good to be true, right? Apparently not, as Dutch breeders, Amsterdam Marijuana Seeds, have achieved just that with the Rainbow Kush strain.

This strain has continued to grow in popularity in recent years for a variety of reasons. Its combination of picture-perfect shades and its pleasant piney flavor have made this strain a firm fan favorite.

And it’s not just Rainbow Kush’s appearance and flavors that makes it so popular, it’s also down to its purported medicinal high.

What Is Rainbow Kush?

Rainbow Kush is a heavily indica-dominant strain with an 85:15 indica to sativa ratio. This hybrid is often confused with the very similarly named Rainbow strain. Rainbow Kush is a cross between the legendary indica Hindu Kush, with Master Kush and Montel’s Pride. 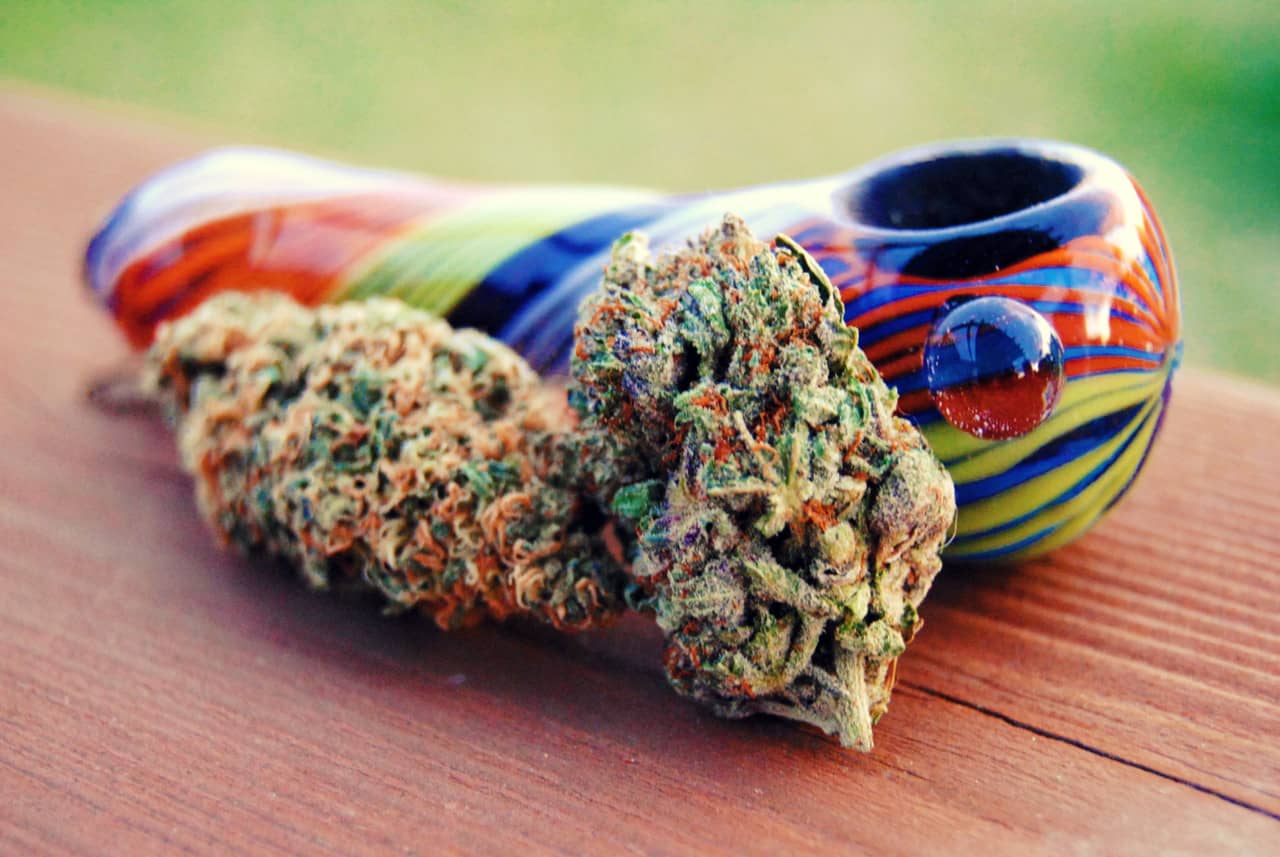 A Rainbow Kush plant is sticky to the touch and packed full of high-inducing THC. This strain is moderately potent, with an average THC level of approximately 18%. After consuming this strain, you might feel like you’ve discovered the ‘pot’ of gold at the end of the ‘rainbow’.

Although not available at all dispensaries throughout North America, some pot shops have been carrying Rainbow Kush. This strain has also grown in demand to become a regular at many different Amsterdam coffee shops.

As already mentioned, the Rainbow Kush strain is beautiful and stunningly colorful. However, some pictures on the internet don’t accurately represent what this strain looks like in real life. Lots of photos of this strain have been photoshopped, but nevertheless, it is still a stunning strain.

Rainbow Kush is ideal for those who enjoy consuming cannabis but want to be able to function throughout their day. Unlike some indica-dominant hybrids, Rainbow Kush should not place you into a weed coma. As long as you don’t overindulge, that is!

What Rainbow Kush may do, however, is help to mellow you out, and possibly make you a little more sociable. Some consumers of this strain say that it may even help to increase your focus or make you feel more creative too.

To begin with, though, Rainbow Kush’s sativa genetics are more prominent and induce a cerebral, uplifting, and euphoric high. All in all, Rainbow Kush is a calming mood-booster. So, you can expect happy vibes followed by deep relaxation after consuming this strain.

Mirroring its full spectrum of beautiful colors, the Rainbow Kush strain offers a wide array of fragrant aromas. It is renowned for its strong piney aroma with hints of fruity sweetness and spicy notes. You can even detect a little bit of skunk in this fragrant strain.

Rainbow Kush is quite sticky to the touch, with plenty of glimmering crystals coating its magnificent, rainbow-colored buds. While in real life, a Rainbow Kush plant may not exactly resemble some of the photos that you have seen online, it is still a stunningly beautiful plant.

A Rainbow Kush plant has distinctive shades of fiery reds and vibrant oranges, pretty pinks, and bright yellows. It also has some distinctive cool-toned blues, greens, purples, and even hints of white.

Rainbow Kush is undoubtedly one of the most colorful cannabis types available in the world. With Rainbow Kush, the entire spectrum of rainbow pigments appears as the plant nears the end of its flowering stage.

This makes watching Rainbow Kush grow an almost magical experience. You get to see this plant transform from dull shades of “cannabis green,” to a magnificent display of sheer vibrancy.

As you will see from the next section, we think that Rainbow Kush plant growers will enjoy their growing experience with this strain.

A Rainbow Kush plant’s grow difficulty is rated as easy to moderate. The good news is that it can be grown indoors or outdoors. Experienced Rainbow Kush growers recommend utilizing the Sea of Green method for best results.

Rainbow Kush needs plenty of care and nutrients to grow steadily, but in the end, if done correctly, the beautiful, colorful buds will be more than worth the effort. The best types of nutrient fertilizers to utilize with this marijuana include bat guano, feather meal, soft rock phosphate, natural potash, steamed bone meal, and sea kelp. Other options, of course, work as well, but these seem to do a lot for this specific strain type.

Space is an important consideration with a Rainbow Kush plant, as it can grow up to 150cm in height indoors. Outdoors, it can stretch almost a foot taller, and it can reach up to 180cm in height.

The highest THC level recorded in a Rainbow Kush sample is believed to have been approximately 20%. With this strain, you can expect a THC range of between 16-20%.

Rainbow Kush is not renowned for having a high CBD level. Most Rainbow Kush strains will have a CBD content of less than 1%. The highest recorded CBD content in this strain is believed to have been no higher than 1%.

The Rainbow Kush strain is becoming an increasingly popular strain among medicinal cannabis consumers as it has several purported health benefits. Rainbow Kush may be useful for alleviating a whole host of painful conditions, including lower back pain, arthritis, and muscular pain. Some Rainbow Kush consumers say that it has moderate antiemetic properties too. As a consequence, this strain may be useful if you are suffering from nausea or lack of appetite.

As already mentioned, the Rainbow Kush strain has a moderate THC level. Therefore, most experienced cannabis consumers will not have to worry about becoming overly high with this strain. On the contrary, this strain’s THC content may offer temporary relief to sufferers of mood disorders like depression and anxiety.

Possible Side Effects of Rainbow Kush

The most common side effects associated with the Rainbow Kush strain are cottonmouth and dry eyes. Cottonmouth is easily manageable, with just a little extra preparation and planning. You can easily counteract cottonmouth by drinking plenty of water before, during, and after you consume this strain.

Also, staying hydrated will help to avoid becoming dehydrated from consuming Rainbow Kush. This should reduce the chance of developing a headache or experiencing any next-day grogginess.

By purchasing moisturizing eye drops before your consumption of this marijuana strain, you can also avoid experiencing dry eyes. Eye drops should arguably be a cannabis consumer’s staple product as many types of weed can lead to dry eyes.

This strain does have some less common, but more significant side effects, as well. Some Rainbow Kush consumers have reported feeling slightly dizzy and more paranoid after consuming this strain.

Dosing is vital with this strain, and consumers should be careful not to overindulge with Rainbow Kush. Novice smokers should consider avoiding this strain entirely in lieu of other milder and less potent strains.

Rainbow Kush is arguably better suited to the medicinal rather than the recreational smoker due to its purported health benefits. While not being exceptionally high in CBD, Rainbow Kush does have quite potent indica effects.

Some medicinal consumers of this strain say that it has helped them with several health conditions. Some of these include nausea, lack of appetite, chronic pain, general anxiety, depression, and stress.

7
4 min read
Join The Discussion
TOC
Premium
Your subscription has ended
If you love cannabis and want to support our site, join WayofLeaf Premium today and unlock
Best of all, part of your membership fee will go towards supporting the fight to legalize cannabis.
Sign Up for WoL Premium
Not now
I already have an account
×
Log in to Your Premium Account