Written by Editorial Team
4 min read
0 comments
Read Later
All information on this website is for general informational purposes only and is not intended or implied to be a substitute for professional medical advice, diagnosis or treatment.
Golden Ticket Strain Overview
You'll be as happy as a kid in a candy factory if you find the Golden Ticket strain at your dispensary. This gold-plated hybrid provides uplifting, euphoric effects coupled with deep body relaxation. Its medicinal uses include addressing chronic stress and mood disorders. 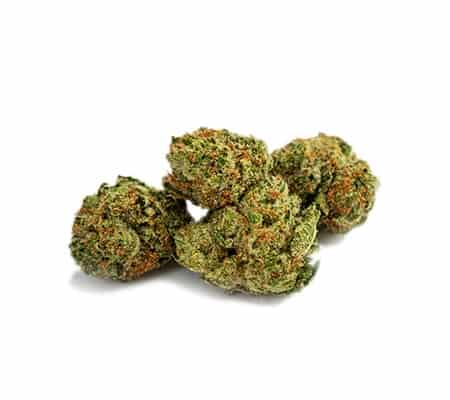 A young boy, Charlie Bucket, finds one of the tickets. Along with his Grandpa Joe, he enters Willy Wonka’s factory, and his exciting adventure begins. In the charming yet surreal tale, Charlie ultimately proves his morality, and Willy Wonka rewards him by giving him ownership of the factory.

In Canada, Canopy Growth Corporation, once known as Tweed Marijuana, had a golden ticket draw of their own. The winners got to tour their factory!

While the Golden Ticket strain won’t make all your dreams come true, it offers many benefits. Read on to find out more.

What is the Golden Ticket Strain?

The Golden Ticket strain, a.k.a., Mr. Dank, is a perfectly-balanced hybrid with 50/50 sativa/indica genetics. It was created by Archive Seed Bank, who combined the terpene-heavy Golden Goat with a hard-hitting strain called Face Off OG. Please note that there is a second version of Golden Ticket. It was created by TGA Seeds and is a variant of Chernobyl marijuana. This review refers to the Archive Seed Bank version.

The Golden Ticket strain is a classic creeper strain. The slow onset of its effects has caught out many novice cannabis consumers and, as a result, caused them to over-consume. Consequently, some have experienced this strain’s side effects. We’ll discuss this in more detail later in the review.

Once Golden Ticket’s effects kick in, most users experience a euphoric and uplifting high. Some users also say that this strain’s cerebral effects cause them to think more creatively and abstractly. Therefore, this strain may provide artistic types with a little inspiration in their creative endeavours.

However, as time passes, the Golden Ticket strain’s physical effects come more to the fore. Users say that their muscle begins to relax, and they feel calm and mellow. Fortunately, this strain does not cause heavy sedation or couch lock.

Golden Ticket’s fragrance is unquestionably one of the best things about this strain. It has a tangy and sweet aroma akin to fresh citrus fruits, such as limes and lemons. These sweet, citrusy smells are offset by a dank earthiness, which is enhanced once combusted. Breaking open the nugs reveals a slight ammonia-like odor.

The Golden Ticket strain’s aroma gives a good indication of how it tastes. When inhaling, the lemon and lime flavors are most prominent, but you can also detect subtler skunky undertones. On the exhale, the earthy and citrus aftertaste lingers long on the palate and leaves you wanting more.

A Golden Ticket plant has medium-sized flowers with dense buds and thick nugs. Coiled around the flowers are thin, pale-green leaves with a noticeable yellow tint. The plant also has a generous coating of vibrant orange pistils and a layer of resinous trichomes.

This balanced hybrid truly brings out the very best traits of indicas and sativas. Once you have Golden Ticket seeds, you have the option to grow indoors or outdoors.

It is a fairly tall plant, so if you elect to grow it inside, we recommend topping it at least once to control the height. Although Golden Ticket grows tall, it is also sturdier than you might expect. It handles cold temperatures and high levels of relative humidity (RH) well. Its thick branches and stalks enable it to withstand strong winds and inclement conditions when grown outside.

Although it is a robust plant, many growers opt to cultivate Golden Ticket indoors for added protection against pests. Indoor growing also has the advantage of allowing you to retain control of humidity, temperature, and lighting. It responds well to growing techniques such as the Screen of Green (SCROG) and the Sea of Green (SOG) methods. Golden Ticket also grows well using a hydroponic system. However, experienced growers say that it tastes better when grown in soil.

Indoor growers can expect a return of between 12-14 ounces per square meter. Outdoors the Golden Ticket strain yields at least 14 ounces per plant. It is typically ready for harvesting by mid-to-late October. The indoor flowering period is between 8-10 weeks.

At present, you will find Golden Ticket seeds in ‘regular’ form, which means approximately half will produce male plants.

There is an array of pre-germination techniques you can use to increase the chances of a female plant growing. Low-stress training (LST) techniques can prevent plants from becoming hermaphrodites. No matter how hard you try, however, there will be male plants in your cannabis garden. Learn how to identify them early and separate them from the females as soon as possible to prevent cross-pollination.

Golden Ticket’s THC range can vary quite significantly. It can be as low as 16% but as high as 26%.

Some users say that this strain has analgesic properties that can alleviate conditions like chronic pain, cramps, and muscle spasms. You may also find the Golden Ticket strain helpful for boosting your appetite.

As it is such a potent strain, users must exercise caution when using it. Overconsumption may cause side effects such as paranoia or anxiety, or dizziness. However, users who consume this strain in moderation will likely only experience cottonmouth or dry eyes.

The Golden Ticket strain is a good option for new growers, but we don’t recommend it to new marijuana users. Some cuts have a very high THC level, and the slow onset of its effects could cause novices to overconsume.

How high will it take you? There's only one way to find out...

4
4 min read
Video
Join The Discussion
TOC
Premium
Your subscription has ended
If you love cannabis and want to support our site, join WayofLeaf Premium today and unlock
Best of all, part of your membership fee will go towards supporting the fight to legalize cannabis.
Sign Up for WoL Premium
Not now
I already have an account
×
Log in to Your Premium Account