Breeders create hundreds of new hybrid cannabis strains every year. They cross breed existing plants to breed weed with a distinct flavor and aroma profile. The effects are different too. At this stage, we assume that virtually every taste and scent is covered.

However, not every hybrid is a ‘success.’ Some never sell well commercially because they don’t have a pleasant taste or smell. Others simply don’t provide the kind of experience users seek.

What breeders understand is that the public has very different tastes. As such, they attempt to cater to as many branches of society as possible. There are sweet, savory, funky, woody, skunky, and earthy strains. Even cannabis such as Cat Piss, which has a genuinely dreadful aroma, has fans!

In theory, there is a market for practically any new marijuana strain. However, competition is extremely fierce. This means some strains never make it to the public’s attention. Others, like those on this list, are strange enough to warrant a closer look and taste.

How Does Cannabis Get Its Taste?

Scientists at the University of British Columbia (UBC) outlined what’s responsible for weed’s flavor. They discovered approximately 30 molecules, called terpenes synthesis genes. Better known as terpenes, these compounds are chiefly responsible for the distinct taste and smell of weed.

The specific terpenes found in marijuana are similar to the molecules in grapevines that give wine its flavor. The UBC researchers discovered that beta-caryophyllene is the ‘main’ terpene in cannabis. Other prominent ‘terps’ include myrcene, pinene, and limonene. Each terpene holds a mystery of its own.

For instance, strains with an earthy, dank flavor, like Purple Kush, are high in myrcene. Strains that offer a citrus flavor contain significant amounts of limonene.

Jorg Bohlmann worked on the study. He claimed that the information could help breeders decide which genes they should focus on for specific flavors. Ultimately, they could develop clearly defined cannabis varieties that are easy to reproduce. This is what happens in the wine industry, which depends on varieties such as pinot grigio and cabernet sauvignon.

There are probably over 200 terpenes in the marijuana plant. However, you will only find a fraction of them in the products on the market. Aside from the ones we have named, linalool and humulene are also accessible and abundant.

What’s fascinating is the suggestion that terpenes have therapeutic benefits of their own. We are so focused on cannabinoids, such as CBD and THC, that we are in danger of becoming blind to other things. The truth is, the cannabis plant is incredibly complex with hundreds of compounds. Cannabinoids, terpenes, and flavonoids, could all play a role in how the herb impacts the body and mind.

In any case, let’s check out five of the most unusual tasting marijuana strains around.

It isn’t often where you get a cannabis strain that tastes like a breath mint. However, this is the case with the fascinating Snowcap offering. It is a balanced hybrid on paper, with a potent THC content of 21-24%. There is up to 4% CBD, which helps take a slight edge off the intoxicating high. It is likely a cross of Haze mixed with Humboldt Snow, and probably originated in California. 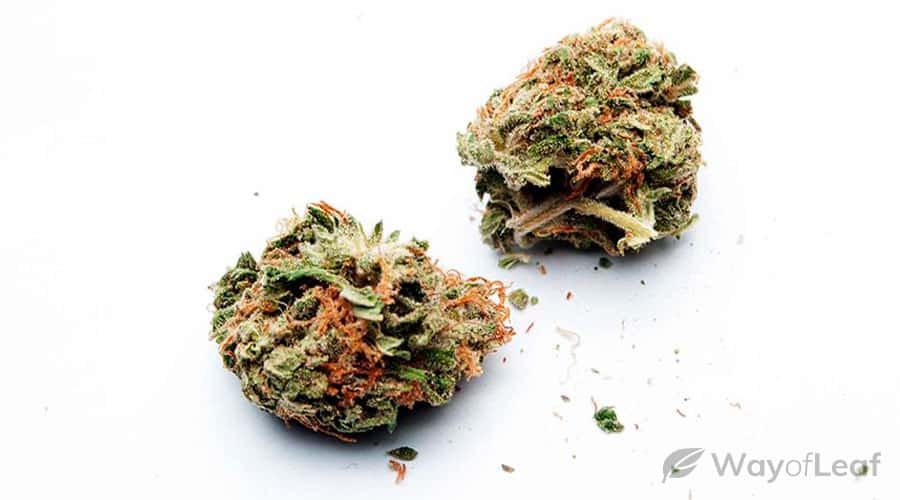 You’re in for a treat when you get a whiff of Snowcap. It has a scent akin to a basket of fresh citrus fruit. You’ll also notice a pleasant menthol aroma that lingers for far longer than you expect. Also, when you light up, you may get a faint smell of lemon and pine for several minutes after finishing your session. The sweet pine notes are immediately noticeable during inhalation. Aside from the lemon taste, you also get that potent menthol taste that sticks to the tongue.

Despite the relatively high CBD content, Snowcap is not a strain to fool around with. The cerebral buzz is a potent one, though it tends to make users burst out laughing more than anything else. It is common to feel elated and filled with joy. Some users suggest the sensation is similar to being cuddled in a cozy blanket. Snowcap is a fantastic strain for anyone looking to enjoy life. The euphoria you feel doesn’t hinder activity, and could, in fact, help improve productivity.

Most breeders do a great job of naming strains to give you an indication of what to expect. Therefore, many users approach Grandpa’s Breath with trepidation! In reality, the musty aroma of this strain isn’t quite as awful as you may expect! It is an indica-dominant strain that’s a cross of OG Kush and Granddaddy Purple. An Oregon-based breeder called Dungeon Vault Genetics created it. The strain has a moderately high THC content of 15-20% with minimal CBD. Indeed, there is more CBG at 1%! 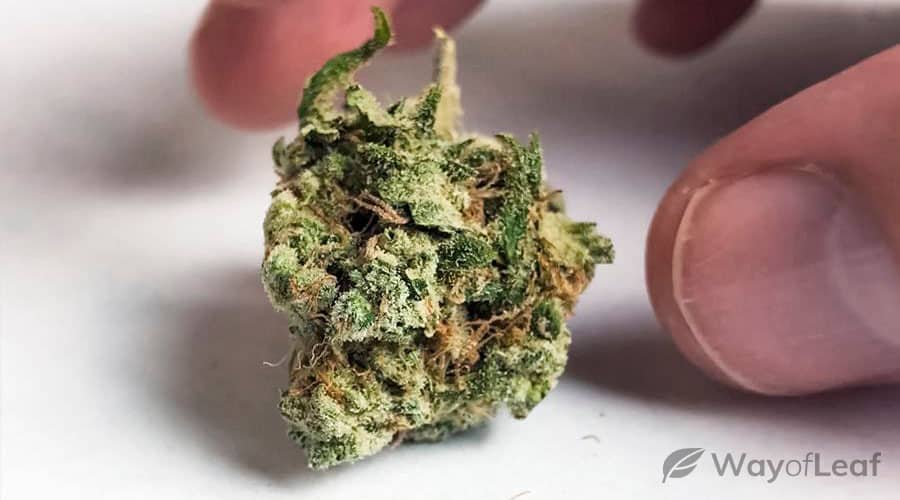 The initial scent is an earthy funky one and is reminiscent of damp foliage. Some users claim they also get the faintest hints of diesel. Break up the buds, and you get an odor that’s similar to incense, a common feature of weed with Kush lineage. It’s clear that Grandpa’s Breath is loaded with terpenes given its pungent aroma. Many users also suggest it has a strange taste that you either love or loathe. On the plus side, the skunky and sweet sensation is a pleasantly smooth smoke.

It may take a while for the high to take hold. After a few minutes, however, you will feel constricted around the temples and lower part of the forehead. Those who use Grandpa’s Breath suggest it is an excellent social strain that helps you become more talkative. About an hour after using this strain, you may experience the physical high that threatens to take over. While you feel energized initially, some users suggest they experience couchlock after a larger dose. Perhaps it is best to keep your use to a few tokes if you plan to go out!

If you are a casual user with a moderate tolerance, you may find Sweet Tooth suitable. It is a relatively old strain and won the High Times Cannabis Cup award for best indica in 2001. In reality, this strain is only moderately indica dominant in genetic terms, though its effects clearly lean to that side. Sweet Tooth is a cross of Nepalese, Hawaiian, and Afghani, with a THC content of 16-19% and just 0.2% CBD. 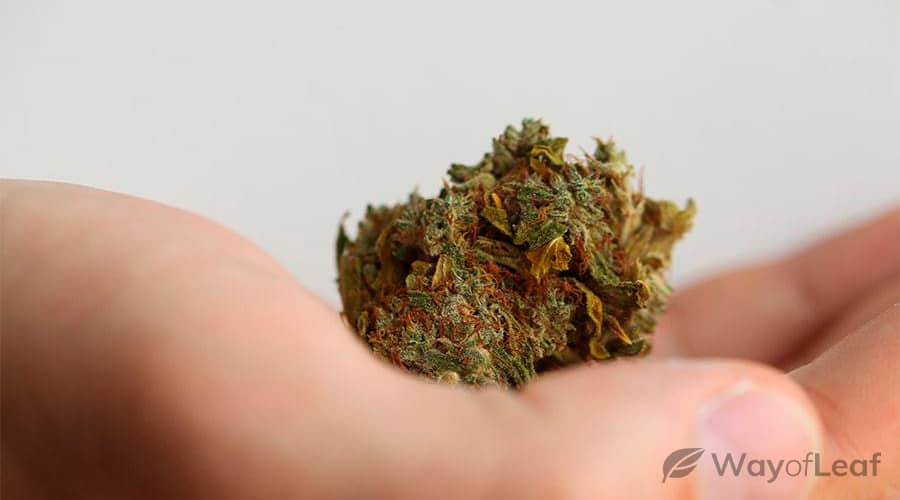 While some users suggest Sweet Tooth is aptly-named, not everyone agrees. You certainly notice the sweet candy scent that may remind you of tree fruit. Once you light up, the fragrant flower scent lingers well after the bud leaves the room. There is no question that the strain offers a taste so sweet that it may hurt your teeth! However, some users believe Sweet Tooth tastes similar to a slice of carpet, especially on the exhale! Despite the name, you may get a smoky, woody taste which is extremely unexpected.

The majority of users love the effects! You will likely feel extraordinarily joyful and triumphant for an extended period. Sweet Tooth’s cerebral effects are almost massage-like in the way you feel invigorated. Users often try this strain to help alleviate feelings of stress and anxiety. It is an excellent option after a long, stressful day where you intend to finish on a high, pun intended!

This is yet another hit from the award-winning breeder, TGA Subcool Seeds. Sadly, the legendary founder, Dave Bowman, passed away in 2020. Plushberry is another example of the great man’s talent and is a cross of Space Queen and Black Cherry Soda. It is a balanced hybrid that contains 15-25% THC, and no more than 0.5% CBD. Please note that there are two phenotypes. One has a lower yield but a better flavor and higher potency. It is also a much shorter plant.

When you break the Plushberry nugs, you don’t get much of a scent. After you light it, you may get an earthy and sweet smell with citrus notes. Some users suggest that this strain offers a mildly sweet and fruity taste. There are also hints of citrus and a spicy taste upon the exhale. However, an excellent description of Plushberry is that its flavor is akin to a fictional berry that tastes incredibly clean. It is one of those strains that you need to sample to understand truly.

In terms of effects, a lot depends on the phenotype you use. While Plushberry is designed as a balanced hybrid, some batches lean indica, others sativa. In general, users prefer this as a recreational strain due to the cerebral high that doesn’t cause couch-lock. Assuming you have a balanced version, you can expect the indica side to make its way to the body. The mental high helps you feel happy and uplifted. We’ve also heard rumors that Plushberry makes people feel aroused!

This strain makes the list primarily because it doesn’t taste as you might expect, thankfully! However, the initial scent may make you feel ill and run for the hills! However, its flavor is a lot better and is almost palatable. Dog’s Shit is a cross of Cambodian, Hippie Trail Afghani, Colombian Gold, and Purple Zacatecas. This unusual combination is slightly sativa dominant with a THC content of 15-20%, and low CBD levels. 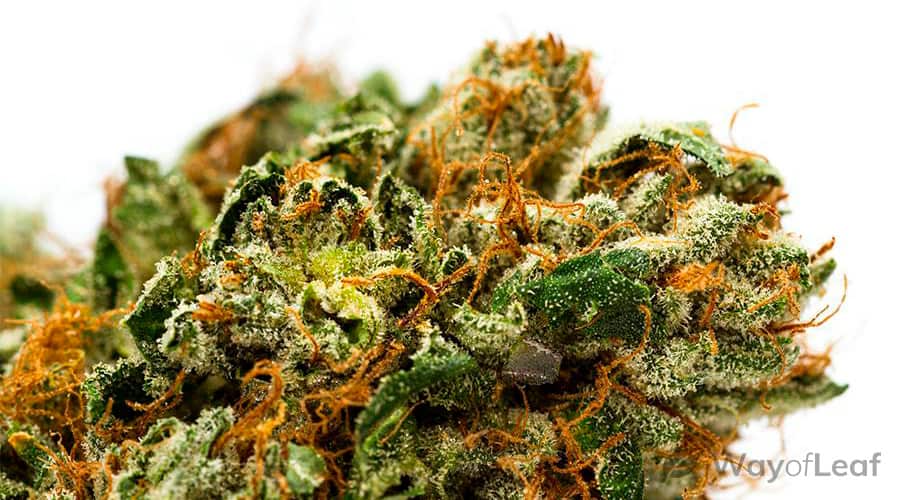 The strain’s name should give you an idea of what to expect from its aroma. There’s no getting around it; Dog Shit smells absolutely appalling. It is utterly foul and genuinely assaults your olfactory senses, similarly to real canine poo. If you can get past the terrible ‘fragrance,’ the flavors will surprise you. We’re assuming no one reading this has actually tasted real dog fecal matter! The primary flavors consist of berries with hints of citrus. You may also get a spicy and damp soil taste on the exhale.

If you brave the stench, you will find that Dog Shit offers an extremely potent and euphoric high. Hopefully, you get so stoned that you can no longer smell it! Users report feeling energetic and happy after a few tokes. You may even experience a greater level of productivity. It is a clear-headed high that enables you to focus on your daily tasks. Dog Shit also helps loosen those tired muscles.

Ultimately, one person’s treasure is another individual’s junk. You may have tried one, or all, of these marijuana strains and have very different thoughts. For some, ‘weird’ tasting cannabis is absolutely beautiful. For others, it is a haunting experience they have no desire to repeat. Bear in mind that Dog Shit has plenty of fans!

There are now thousands of hybrids out there, so we would expect them to cover every flavor and scent profile under the sun. What is the strangest cannabis strain you have ever tried? Let us know in the comments section!