It is no exaggeration to say that moldy cannabis is potentially deadly. A report published in The Sacramento Bee in February 2017 highlighted the seriousness of the issue. The report stated that Doctors from UC Davis found potentially lethal bacteria and mold on samples from an astounding 20 dispensaries and weed growers in Northern California.

Although it is not likely to be fatal for healthy individuals, it is potentially life-threatening for users with weakened immune systems. People with chronic conditions, such as patients with AIDS or leukemia, could develop deadly lung infections from using moldy marijuana. Reportedly at least two people have died from using weed containing mold.

Even if you are otherwise healthy, moldy marijuana could still cause you to become seriously ill. Therefore, you must understand how to identify mold on your weed. Worryingly, a significant number of novice users have no idea how to differentiate between mold and the cannabinoid-rich trichomes. This guide will clarify the difference between the two to help keep your lungs free of harmful bacteria.

What’s the Problem with Mold on Cannabis?

The main issue is that moldy marijuana and high-quality weed look similar! If you’ve only ever used mids cannabis, you probably won’t have this problem. However, premium-grade bud is laden with glistening milky white trichomes that give your marijuana its unmistakable kick.

The trouble is, moldy weed also looks white at first glance. Even a powdery mildew infection causes leaves and buds to become covered in white specks. If you are a novice, it can be tough to make the connection. 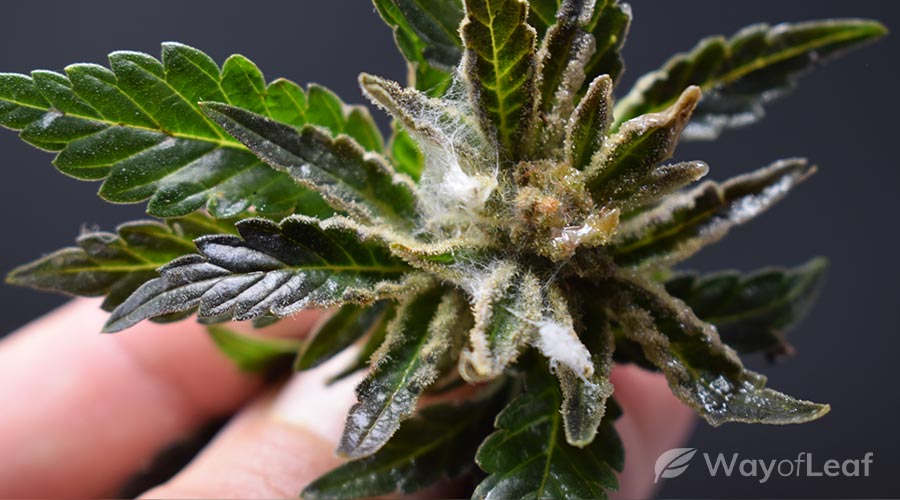 Even though many of cannabis’ chemical compounds are natural fungicides, the dense structure of certain strains makes them prone to infection. Kush strains, in particular, are particularly susceptible to mold and mildew. Therefore, any hybrid containing Kush will also become more vulnerable to developing mold. Common pathogens in weed include:

Overall, there are almost ninety species of fungi that attack your marijuana plants. Mold spores are also irritatingly resilient. They can survive the heat of an oven when you ‘decarb’ your weed. They can even withstand the heat of the flames used to light up a joint or bowl. When you inhale moldy weed, the spores go straight to your lungs.

Certain molds release mycotoxins, some of which are known carcinogens. For example, the Aspergillus pathogen releases Aflatoxin and Ochratoxin. Chronic exposure to these toxins can result in health problems such as vomiting, nausea, coughing, inflammation, asthma, and lung irritation.

How to Differentiate Mold from Trichomes Using Your Five Senses

Moldy and high-grade weed can both develop a coating of white dots. However, you can spot the difference when you look a little closer. We recommend purchasing a magnifying glass to be 100% sure. When you see the bud up close, you can spot trichomes because they are crystal or milky white with mushroom-like heads.

Even though trichomes cover the buds, they stand out like a beacon when seen up close.

In contrast, moldy weed will be furry and look ‘old.’ The mold on weed looks like the mold you find on fruit and vegetables that have gone off. Under bright light, and with a magnifying glass, you can spot a hair-like fuzz that is white, brown, green, gray, or black. If your weed is ‘dusty’ looking, it is probably mildew. Another way to describe mold is that it resembles spider webs or white cotton candy.

Weed’s terpenes are what gives it the distinct aroma. Marijuana strains have a variety of different fragrances, including spice, pepper, citrus, pine, or fruit. Research the strain you are purchasing to see if it has the ‘right’ smell. As long as your sense of smell is reasonable, you should have no problem identifying moldy weed.

However, if you are a novice, it isn’t easy to distinguish between weed’s earthy aroma and the musty smell of mold. If the weed smells like damp clothes, then it’s likely gone bad. You may sometimes notice an excessively sweet scent, coupled with a musty and dank aroma. This smell is a sign that your marijuana contains too much moisture.

In high-quality weed, you will find it easy to pull the nugs apart. If you trust the source and know that it is good quality marijuana, remember how it feels for future reference. If the weed feels crumbly and has compressed nugs, it is low-grade cannabis.

Bizarrely, you can even use your ears to determine the quality of marijuana. When buds are correctly dried and cured, they make a crisp ‘snapping’ sound when you pull them apart. It is a sign of low moisture content, which is precisely what you want in cannabis.

If the buds are hard to pull apart or don’t make much noise when doing so, they likely contain a high moisture content. This is indicative of poorly dried weed. This also increases the risk of mold growth.

Hopefully, you will be able to determine moldy weed long before taking a ‘taste test.’ If you get this far, it should be easy to tell the difference between high-quality bud and Mexican brick weed.

Unless you’re smoking Strawberry Cough, which is known for making users cough, you have bad weed in your hands.

Cannabis has a shelf life of many months as long as it is dried and cured correctly. Ideally, it should be hung upside down to dry for several days. Then it should be stored in airtight glass containers when the moisture level is low enough. When you get it right and store it correctly, your weed should last for at least six months, if not longer.

However, when marijuana isn’t dried correctly or thoroughly enough, mold can form. Learn how to spot it because moldy weed can be deadly if you have a weak immune system.

Make sure you research marijuana standards in your region. Unfortunately, without uniform testing standards, there is an enormous disparity between the quality of weed testing in different areas. This can even be the case within the same state.

Finally, make sure you only purchase marijuana from dispensaries and brands known to quality test their plants for signs of pathogens and molds. Otherwise, you could be playing Russian Roulette with your health.

How to grow this high-yielding strain

All you need to know to grow this zingy citrus strain

How to avoid having your marijuana crop ruined by pests

The 15 Best Highest Yielding Strains for Your Cannabis Garden

The most generous strains around

Increase your yield with PROVEN strategies!

How to Grow Bubba Kush Marijuana

The comprehensive guide to growing