Humans have used cannabis for thousands of years for its fibers, as a food, and for its medicinal properties. However, it is only within the past few decades that we have really begun to understand the chemical makeup of this unique plant.

Research from the 1970s revealed the presence of many different molecules known as cannabinoids. These include the famously psychoactive THC, among many other compounds.

We now know that as well as cannabinoids, cannabis contains many other beneficial substances including polyunsaturated fatty acids, proteins, and terpenes. However, it is cannabinoids that have really grabbed the attention of scientists and the general public alike.

The two most thoroughly researched cannabinoids are THC and CBD. As we know, THC provides the high we typically associate with marijuana, and most people have heard of CBD and its wealth of potential health benefits. But how about the lesser-known cannabinoid CBDA?

CBDA stands for cannabidiolic acid, and as the name suggests, this molecule is closely related to CBD. In fact, scientists consider CBDA the parent molecule of CBD as it is converted to CBD through the process of decarboxylation.

CBDA is what is known as a carboxylic acid, meaning that its structure contains a carboxyl group comprising one carbon, one hydrogen, and two oxygen atoms, commonly expressed as COOH. When you expose this molecule to high temperatures, this group breaks up to form carbon dioxide and hydrogen. What you are left with is CBD, or cannabidiol, to call it by its proper name.

Although to some extent this reaction happens naturally over time, the process is extremely slow. However, when you smoke cannabis, heat it in a vaporizer, or bake it in the oven, you speed up the process greatly.

If you have ever cooked with cannabis, you will know how crucial the decarboxylation process is. It activates the THC and CBD contained in the cannabis and dramatically enhances its effects.

What Is the Difference Between CBD and CBDA? 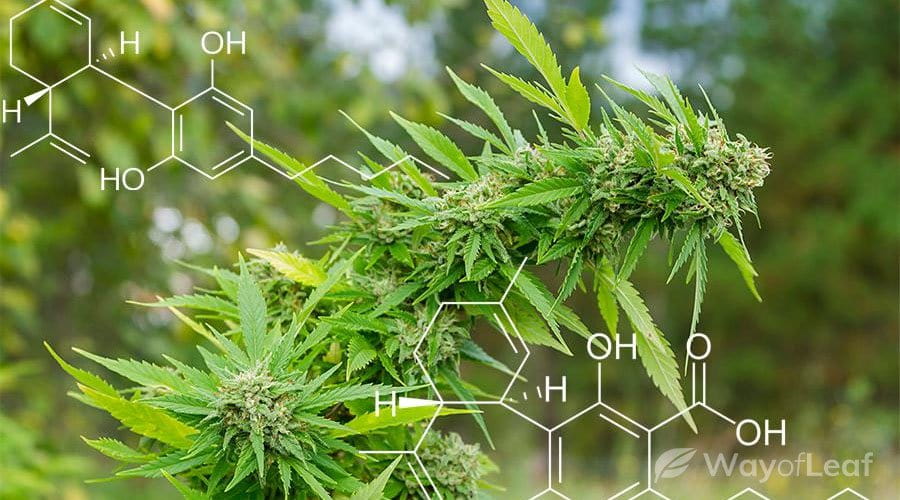 The chemical structures of CBD and CBDA are incredibly similar. The only difference is that CBDA contains the extra COOH group which decarboxylation removes.

Most people believe that CBD is more biologically active than CBDA, and it is undoubtedly more popular when it comes to health products and supplements. However, CBDA is by no means completely inert. The main difference here is that while there are countless research papers about CBD and its benefits, scientific studies on CBDA are still lacking.

So is CBDA really less effective than CBD, or is it just misunderstood? Let’s review the available research on CBDA and assess its possible benefits for our health.

Scientists have not published much research on CBDA to date, especially when compared to its relatives CBD and THC. However, according to the few studies that exist on the effects of CBDA, it shows remarkable promise in the treatment of several conditions.

One of the conditions for which CBDA is offering hope is cancer, specifically breast cancer. Studies by Takeda et al. found that CBDA has the potential to suppress breast cancer cells and inhibit them from spreading throughout the body, a process known as metastasis.

The researchers found that exposing cancer cells to CBDA for just 48 hours downregulated the expression of an enzyme called cyclooxygenase-2 (COX-2). This enzyme is part of the inflammatory process and may play a role in as many as 40% of cases of invasive breast cancer. In addition, CBDA appeared to upregulate a gene called SHARP1 (also known as BHLHE41), which has the action of inhibiting breast cancer metastasis.

Since experts estimate metastasis to be responsible for up to 90% of the deaths related to breast cancer, this finding could prove vital in improving the prognosis for patients diagnosed with this life-threatening condition.

Since CBDA appears to inhibit COX-2, it has anti-inflammatory properties, much like the better-known cannabinoid CBD. Many conventional anti-inflammatory drugs work by inhibiting COX-2, and doctors commonly prescribe them in the treatment of painful conditions such as arthritis.

Although, at present, no studies have been carried out specifically on CBDA for joint pain or arthritis, we can hypothesize that it should offer some relief.

CBDA for Nausea and Vomiting

It appears that these potent effects are a result of CBDA enhancing the activation of 5-HT1A receptors. These receptors are designed to bind with the neurotransmitter serotonin and are prevalent in the digestive system.

More research is definitely necessary to establish the effects of CBDA on nausea and vomiting in humans. However, if proven, this treatment could offer relief to patients suffering from the side effects of chemotherapy as well as nausea related to other conditions.

There is little evidence currently available to support this use of CBDA, but some have suggested that this compound could be useful in the treatment of stress and anxiety. One company has even taken out a patent on CBDA and other cannabinoids as a therapy when combined with antipsychotic medication.

The good news is that CBDA is legal in many places around the world if it comes from hemp with less than 0.3% THC rather than other cannabis varieties.

One caveat is that due to the lack of research, CBDA is classified as a food supplement rather than a medicine. As such, it is not strictly regulated. If you decide to try a product containing CBDA, make sure you buy it from a reputable source, preferably one which uses third-party lab testing. That way you will know that you are getting a high-quality product, and exactly how much CBDA should be in each dose.

How to Get CBDA

CBDA is only found in raw cannabis, as once it is processed or smoked, it loses its COOH group and becomes CBD. CBDA is decarboxylated at just 110°C/230°F, so it will become CBD even at relatively low temperatures.

The good news is that you can find CBDA in the stems and leaves of cannabis as well as the flowers. If you are a grower, you could put your leftover stems and leaves to good use rather than throwing them on your compost heap. Why not try using them to create tasty 420 meals or, if you feel really adventurous, making your very own cannabis tincture?

While the idea of munching on raw cannabis leaves may not be that appealing, you can try adding them to juice or smoothies, mixing into a salad, or sprinkling onto dishes as a healthy and unusual garnish. You can also find CBDA in some brands of CBD oil or tinctures which are made from raw, unprocessed hemp.

If you want to make your own CBDA tincture at home or try incorporating raw marijuana into your diet, you will need to choose a cannabis strain that has a high CBD content.

Any marijuana strain that is high in CBD will be high in CBDA right up until you heat it, whether that be in a joint, a vape, or by cooking into edibles.

Some of the most famous CBD-rich strains include:

Although CBDA is not as famous as CBD, it may still have a number of beneficial effects on our health and wellbeing. We are just beginning to understand the potential of CBDA, especially for conditions such as breast cancer, nausea, and vomiting. It is also possible that this underrated compound has many other benefits just waiting for us to discover them.

If you want to explore the effects of CBDA on your own health, remember that it is only in raw cannabis you will destroy it by smoking or baking. One of the best ways to get CBDA is by adding marijuana to green smoothies or throwing a few leaves into your juicer along with a selection of fruit. So next time you’re looking for a new way to consume your cannabis, why not give these ideas a try?

3
3 min read
Smoking Weed with Asthma… Should You be Doing it?

Combating this serious condition with marijuana

How to get that high without the high