It is both fascinating and gratifying to witness the level of support for marijuana legalization increasing in the United States. For decades, the general public was vehemently anti-cannabis. After the Marihuana Tax Act of 1937 outlawed weed, the vast majority of Americans were happy with the situation.

In 1969, the Pew Research Center found that only 12% of Americans were in favor of legalizing cannabis. There was a bump in support in the next decade. By 1979, the percentage supporting legal marijuana had increased to 30%. But the Reagan Administration, and its failed War on Drugs, helped demonize Mary Jane once again. In 1989, only 16% of Americans wanted legalized cannabis.

This percentage doubled by 2008, but suddenly, there was a massive uptick. In a December 2019 poll, Pew found that 67% of Americans now believed it was time to end cannabis prohibition. Perhaps it is because millions of people have tried it due to legalization in dozens of states.

Users know how the THC in marijuana can help them relax. Then there are also at least two million MMJ cardholders who believe weed helps them manage specific medical symptoms.

In general, we tend to take cannabis and hemp seriously. However, in this light-hearted article, we check out five fun facts about THC, the main intoxicating compound in marijuana.

1 – There Is Evidence That THC Could Make You Smarter

This is a severe blow to those who believe cannabis makes you dumber. Indeed, the infamous ‘Dunedin Study,’ which claimed the herb lowered IQ, was effectively debunked a few years ago. No one is suggesting that marijuana increases a person’s intellectual capacity. However, there is evidence that it could give you a short-term burst of mental stimulation, at least.

A pilot study by Gruber et al., published in Frontiers in Pharmacology in October 2016, involved 24 participants. All of them had MMJ cards for one of chronic pain, depression, and anxiety. After three months of marijuana use, the volunteers completed two tests. One is called the Stroop Color-Word Test. 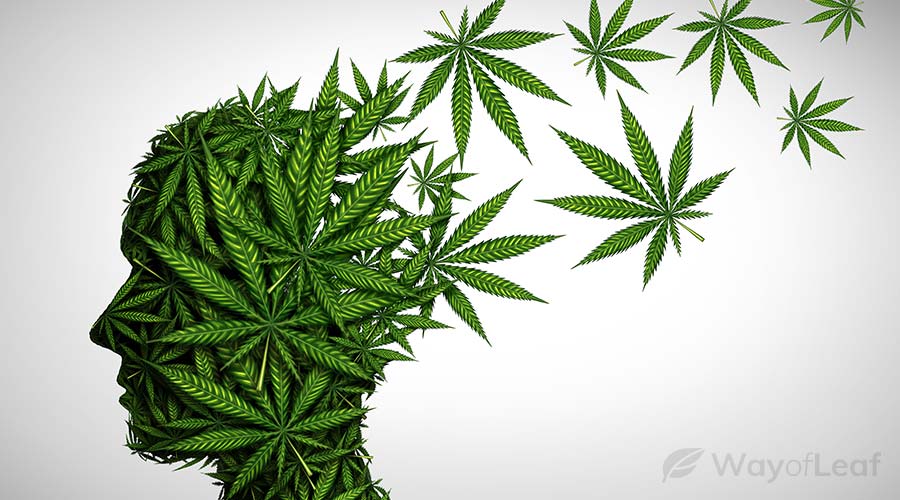 It assesses your thinking ability by measuring how long it takes to name the color of a printed word that doesn’t match the written word. For example, black, red, yellow, and green. You can see that green is written in the color blue.

The second test involved connecting numbered dots. The researchers then compared test scores to the volunteer’s original baseline. The study found that the 11 patients who completed the three months finished their tasks faster. They also didn’t make any more errors than they did previously. Finally, the patients reported improvements in various symptoms, including better sleep.

THC is also a potential neuroprotectant. This means it keeps the brain protected from inflammation and other harmful things. Scientists believe that the cannabinoid could cause neurogenesis; the growth of new brain cells. In contrast, legal drugs such as alcohol, and illicit substances such as cocaine, suppress neurogenesis.

2 – You Can’t Technically Die from a Marijuana Overdose

Despite its strong anti-cannabis stance, even the DEA had to admit that you can’t overdose on marijuana. In 2017, it wrote that “No deaths from overdose of marijuana have been reported.” This is on top of the 1988 ruling by Judge Francis Young. He was in favor of taking the herb off Schedule I because of its low harm profile.

Judge Young said you would need to consume approximately 1500 pounds of cannabis in 15 minutes to induce a lethal response. You would need to smoke over 1,000 large joints per minute for this to happen!

In 2014, research found that you would need to orally ingest 0.5 grams of pure THC per kilogram to potentially overdose. Therefore, a 70-kilogram individual (154 pounds) would have to consume 35 grams of a 100% THC extract. One scientist suggested this was an amount that far exceeded what most people consume in their entire lifetime.

However, before you go wild on cannabis, a word of warning. Excessive usage could cause adverse effects that lead to tragic consequences. One young student ate an entire THC cookie. He began acting strangely and, ultimately, fell to his death from a hotel balcony. Whenever or however you use weed, do so responsibly.

This is very much a rumor because we know so little about the country. Dennis Rodman aside, it is dangerous for American nationals to travel to North Korea. There is a high risk of arrest and long-term detention. The Democratic Republic of North Korea (DRPK) was founded in September 1948 with Kim II-sung as its first leader. He led with an iron fist for over 45 years, and his son, Kim Jong-Il, succeeded him. His son, Kim Jong-Un, in turn, became the new ruler in 2011.

His relationship with Donald Trump is best described as ‘peculiar.’ The duo veer from the brink of war to cuddly friendship in the blink of an eye it seems. The nation has an estimated population of around 25 million, and a life expectancy that’s significantly lower than ‘first world’ nations.

By all accounts, the standard of living is relatively low, and most of the population is poor. They exist to serve their state, and the oppressive regime has no issue severely punishing those who step out of line.

One would assume that North Korea has a similarly draconian stance on cannabis. However, this is potentially not the case.

In 2013, Vice News claimed that North Koreans smoked ip dambae, a cheap tobacco substitute (Victory Gin anyone?). It looks a lot like cannabis but isn’t related. What’s more interesting is the country’s hemp program. North Korea embarked on a drive to grow hemp in the 1960s during a severe economic crisis. Unfortunately for the country’s residents, the measures were poorly implemented and led to a famine in the 1990s. However, even today, DPRK ranks #3 on the list of the world’s biggest hemp producers, at least for now.

It is difficult to say whether North Korea tolerates marijuana or not due to the lack of foreign visitors. One publication suggested that North Koreans grow cannabis at home, or at least harvest wild weed. A journalist suggested that marijuana is classified as a dangerous drug like heroin. Yet there are also reports of tourists smoking either hemp or cannabis. Although this is a fun rumor, we don’t recommend testing out the theory!

4 – Tupac Shakur’s Ashes Were Smoked in a Joint

Tupac Amaru Shakur, better known by his stage name, 2Pac, is considered as one of the most influential rappers of all time. Incidentally, his birth name was Lesane Parish Crooks. Tupac enjoyed remarkable success in a career that was tragically cut short. Aside from creating several albums, he also earned critical acclaim for his roles in a handful of movies.

However, his was a life filled with controversy and occasional violent incidents. After being shot in 1994, Tupac was continually looking over his shoulder. However, on the night of September 7, 1996, he was murdered in Las Vegas. This generational talent was dead at the age of just 25.

He had requested for his ashes to get smoked in a joint within the lyrics to one of his songs, ‘Black Jesus.’ No one knows for sure whether or not Tupac was serious. As it happens, members of Outlawz, the group founded by the legendary rapper, took him seriously.

In an interview, EDI Mean and Young Noble confirmed that they smoked Tupac’s ashes at a memorial event on a beach. They held a private event for him, which included group members, and Tupac’s mother and family. According to at least one doctor, the act was no more dangerous than other things people smoke regularly. As it happens, the group mixed the ashes with the California Kush strain.

Those who hate cannabis but adore many past presidents are often enraged at the suggestion these men used the herb. It seems likely that Thomas Jefferson, George Washington, John Adams, and James Madison used hemp at the very least. However, one letter from Washington stated that he “began to separate the male from female plants rather too late.” It is easy to imply that our first president was looking for female plants and their THC content.

As for Thomas Jefferson, we should remember that he worked as an ambassador to France during the age of hashish. There seems little doubt that James Monroe used THC as he openly used hashish. Many of this nation’s leaders fought as soldiers in a war before becoming president. Andrew Jackson, Zachary Taylor, and Franklin Pierce, all fit into this category. 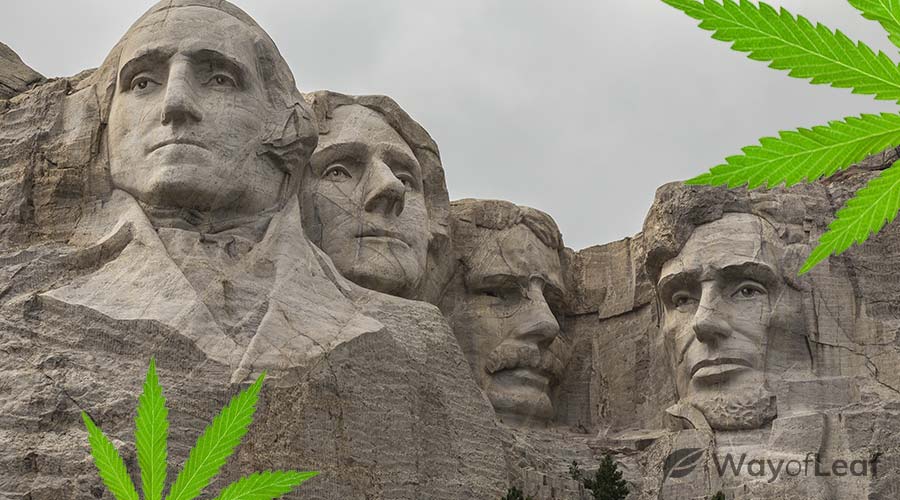 There is evidence that all three used cannabis during wars. Pierce fought in the Mexican-American War. When writing home, he said that cannabis smoking was about the only good thing about the conflict!

In one of JFK’s biographies, the author claimed the president smoked three joints while in the White House in 1962. It seems highly likely that Kennedy was a regular user to deal with his back pain. Bill Clinton famously said he didn’t inhale when experimenting with weed. However, according to Christopher Hitchens, who attended Oxford University at the same time as Clinton, Bill enjoyed his THC in edibles form.

In a taped conversation, George W. Bush all but admitted using cannabis. He had no knowledge that he was being recorded. Then again, he also admitted using cocaine. Finally, Barack Obama admitted using marijuana. He said: “When I was a kid, I inhaled. That was the point.”

This article was all about the more lighthearted side of cannabis. Incidentally, we also have fun facts about weed and sex if you are interested!

Ultimately, marijuana is something we should enjoy rather than endure.

Millions of people around the world now believe it can help them manage the symptoms of scores of medical conditions. Countless others enjoy using it recreationally, especially at the end of yet another stressful day. No matter how you use weed, make sure you do it sensibly. After all, you only need a little to enjoy the experience a lot!