UTI, short for Urinary Tract Infection, is an infection in any part of your urinary system. While most infections involve the lower urinary tract, the bladder, and the urethra, a urinary tract infection can appear in several places, including your kidneys, ureter, urethra, and bladder. UTIs are relatively common in women, but men may also suffer from Urinary Infections.

A Urinary Tract Infection happens when bacteria get into the urinary tract and start multiplying. As a result, there is swelling, pain, and redness in the urinary tract. The majority of UTIs remain in the bladder, and if they are not treated quickly, the bacteria could travel to the kidneys and cause a severe infection called pyelonephritis. This infection of the kidney can cause back pain and fever.

What people don’t realize is just how many of us suffer from a UTI at some point in our lives. A study by Al-Badr and Al-Shaikh, published in the Sultan Qaboos University Medical Journal, reviewed recurrent UTI management in women. In the review, the researchers stated that “UTIs are one of the most frequent clinical bacterial infections in women, accounting for nearly 25% of all infections.”

Incredibly, the researchers went on to say that 50-60% of women will develop UTIs during their lifetime! The review stated that women are eight times more likely to develop a UTI than men, and frequent sexual intercourse was one of the biggest risk factors. One of the primary reasons for this discrepancy is because the urethra in females is shorter than in males, so bacteria find it easier to access the bladder.

The Mayo Clinic makes things simpler by dividing UTIs into three categories according to the part of the urinary tract that is affected:

According to the National Kidney Foundation, Urinary Tract Infections are responsible for almost 10 million doctor’s visits each year. It is obvious then that this is a major medical issue, and despite advances in medicine, the rate of UTIs seems to be increasing rather than decreasing. There are those who believe that marijuana could help, so let’s take a look to see if the science supports this theory.

First, let’s look at the causes of UTIs, followed by the type of medical treatments currently available.

One of the major causes of Urinary Tract Infections is lack of hygiene. It’s as simple as that. From when we are children, we are taught to wipe from front to back after using the bathroom, and there is a good reason for that. As the urethra is located extremely close to the anus, it is susceptible to infection from bacteria that are found there.

Sexual intercourse may lead to cystitis, a relatively common lower urinary tract infection that affects the bladder. Although cystitis is not normally a serious condition, it is extremely uncomfortable and can result in complications if not dealt with. However, you don’t need to be sexually active to develop this condition. All women are at risk due to the short distance between the urethra and the anus, and from the urethral opening to the bladder.

An infection of the urethra, also known as urethritis, occurs when gastrointestinal tract bacteria spread to the urethra from the anus. As the female urethra is located near the vagina, sexually transmitted infections such as gonorrhea, herpes, and chlamydia, can also result in urethritis.

In extreme cases, a UTI could result in a life-threatening infection called sepsis. There is a bigger risk of this problem occurring if the infection moves from the urinary tract to the kidneys. 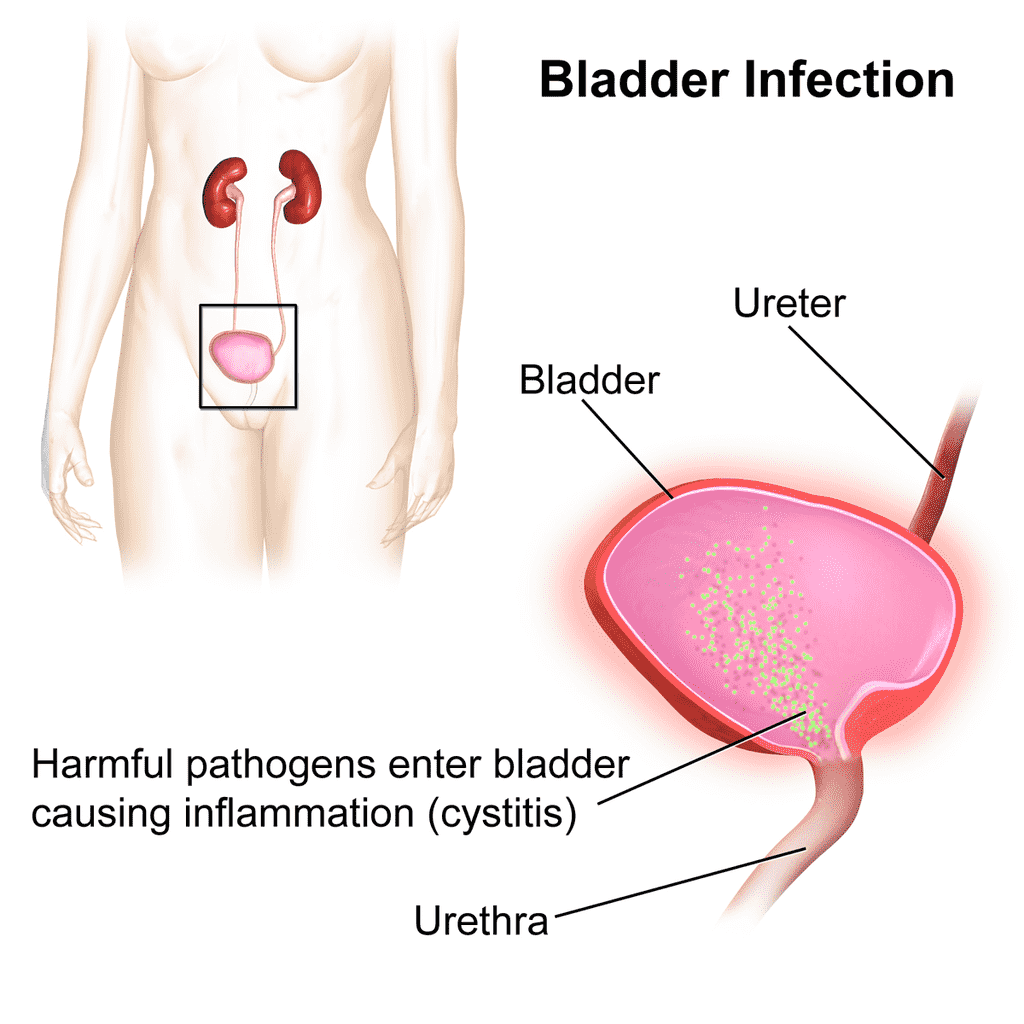 Aside from female anatomy and regular sexual activity, other risk factors include:

Urinary Tract Infections can be extremely discomforting. The following symptoms are common:

If the infection spreads to your kidneys and becomes worse, you may experience the following symptoms:

If you believe you have a UTI, pay a visit to your physician ASAP. During the appointment, your doctor will test a sample of your urine for blood cells and bacteria in what is known as a urinalysis. This sample tells the doctor what bacteria are present. To begin with, you will probably be given a prescription for antibiotics.

Also, your doctor will advise you to drink lots of water to help flush the infection out of your system. Some people also drink cranberry juice, soda, ginger tea, or even parsley water.

If they fail to clear up the problem, you will probably be referred to a specialist called a urologist. This urinary tract expert will order tests such as an ultrasound exam, a cystoscopic exam, urodynamics, and an intravenous pyelogram.

Antibiotics are the typical first course of action. If you get 3+ UTIs per year, your doctor may ask you to remain on antibiotics for at least six months. It may also be necessary to take an antibiotic after sex, or for a couple of days when the symptoms of a UTI occur. Commonly used antibiotics include:

Although you may be unable to 100% prevent a UTI from occurring, following these steps can help reduce the risk:

There hasn’t been a huge amount of research performed on marijuana’s impact on UTIs. The prohibition of the herb makes it almost impossible for American scientists to properly research cannabis on the whole.

However, a few findings have generated interest. For example, Boudes and De Ridder found that the CB1 (cannabinoid 1) receptor plays a role in a healthy bladder. The report, published in BJU International in 2013, discovered that our bladder walls are lined with CB receptors which the cannabinoids in marijuana and hemp can act upon. 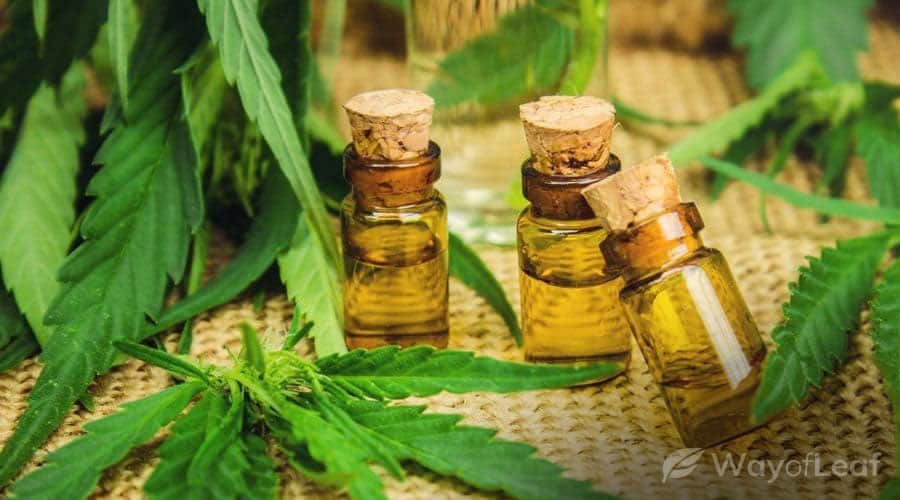 Developing a greater understanding of how the cannabinoids in weed impact our endocannabinoid system (ECS) is the key that could unlock all manner of information on how marijuana could help alleviate medical symptoms. The ECS was discovered in the 1990s and could be evidence that marijuana was made for mankind!

These endocannabinoids work with the ECS, which has been classified as “the only endogenous system of chemical signals that is involved in everything.” The ECS plays a role in a variety of functions including memory, learning, immune and inflammatory response, digestion, pain response, fertility, and more.

What’s especially interesting is the apparent link between endocannabinoids and the concept of homeostasis, which means maintaining a sense of physiological balance in the body. It is possible that endocannabinoids seek to address imbalances caused by injury or disease.

A study by Tyagi et al., published in the Indian Journal of Urology in 2010, looked at the functional role of cannabinoid receptors in the urinary bladder. It concluded that “the growth-inhibiting action of cannabinoids acting on these receptors expressed on transformed cells might be useful for the management of malignancy in the bladder.”

A more recent study, by Bjorling and Wang, published in Frontiers in Systems Neuroscience in 2018, looked at the potential of endocannabinoids when controlling bladder pain. The research involved mice, and it was discovered that when the mice received cannabis, their CB2 receptors were activated. As a result, their level of swelling and bladder weight was reduced.

Is Marijuana an Effective UTI Remedy

Several studies have found that CB1 and CB2 receptors are present in the human bladder. There is also evidence that expression of the CB2 receptor in rodents is increased when they have chronic and acute cystitis. It seems as if the ECS could play a significant role in modulating the severity of bladder inflammation and pain.

Unfortunately, specific research on marijuana’s effect on UTIs is limited. In the United States, weed is a Schedule 1 drug with ‘no medical value.’ Also, would-be researchers looking to use marijuana for any study must jump through an array of hoops. They also receive weed from the University of Mississippi, which bears no relation to what you will find in a dispensary.

At present, most relevant research relates to the effects of cannabis on the bladder. A 2013 study by the American College of Obstetricians and Gynecologists found that administering cannabis extracts in THC improved urinary incontinence by up to 25%!

Alas, we will be forced to wait for further research into the ECS first before researchers have the opportunity to look at how weed can help people with UTIs. If you are interested in using cannabis to help treat the symptoms of UTI, here are a few strains worth considering:

10
4 min read
Join The Discussion
More comments
TOC
Premium
Your subscription has ended
If you love cannabis and want to support our site, join WayofLeaf Premium today and unlock
Best of all, part of your membership fee will go towards supporting the fight to legalize cannabis.
Sign Up for WoL Premium
Not now
I already have an account
×
Log in to Your Premium Account