As a result, tens of millions of American adults now have easy access to the plant. At the same time, marijuana is getting stronger as breeders successfully experiment with new hybrids. It is normal for a strain to contain more than 25% THC, the psychoactive compound that causes you to get ‘high.’

Even though more states are making cannabis available, it is common for first-time users to lack basic knowledge of the plant. This is one of the reasons why legendary activists such as Dennis Peron were pro-medicinal marijuana but against recreational use. The combination of shoddy education about weed, along with increased availability and markedly stronger cannabis, means overconsumption is possible.

Colorado was the second state to legalize marijuana recreationally in 2012. Amendment 64 went into effect in January 2014. Soon, physicians claimed they saw a sharp rise in overconsumption cases. It became increasingly common to see 3-4 overconsumption cases per week. Hardly an epidemic, but still a noteworthy trend.

One of the biggest reasons for a spike in such cases is the more potent cannabis that’s now available. While there may have been 20%+ THC marijuana available in the 1970s, it was next to impossible to find. Today, in states where marijuana is legal, 20% is close to the average! It should go without saying that such potent strains will have a significant effect on a new user.

According to physicians, the vast majority of overconsumption cases involve edibles. Remember, most incidents involve first-time users. When such an individual uses an edible, they are irritated by the lack of immediate effects. It seems that many of them don’t realize that edibles can take up to two hours to provide the desired results.

They eat an edible, feel no noticeable effect after a few minutes, and decide to eat some more. At this stage, they are into ‘overconsumption’ territory. When the weed takes hold, it completely overpowers their senses.

Will I Die from Overconsumption of Marijuana?

‘Overconsumption’ is not the same as an ‘overdose,’ in the sense that your life is not in immediate danger. All chemical substances are potentially deadly if taken in a high enough dose, and marijuana is no different.

The Food and Drug Administration (FDA) requires all approved medicines to have an established toxicity level (also known as an LD50). This measurement is the amount of any given drug it would take to kill 50% of test subjects.

In general, the LD50 measurement test is carried out on female lab rats. For example, if 200 rats were given 2,000mg of Paracetamol and 100+ of them died, we could say that Paracetamol’s LD50 is 2,000mg. It is theoretically possible to overdose on marijuana. There are claims that people have died from “cannabis poisoning,” but you would have to consume far more cannabis than is realistically possible.

How Much Cannabis Is Potentially Fatal?

In 1988, Judge Francis Young famously ruled that marijuana was far safer than many of the foods we consume in “strict medical terms.” For instance, did you know that eating ten raw potatoes could elicit a toxic response? He cited research that stated marijuana’s LD50 was approximately 1:20,000 to 1:40,000. 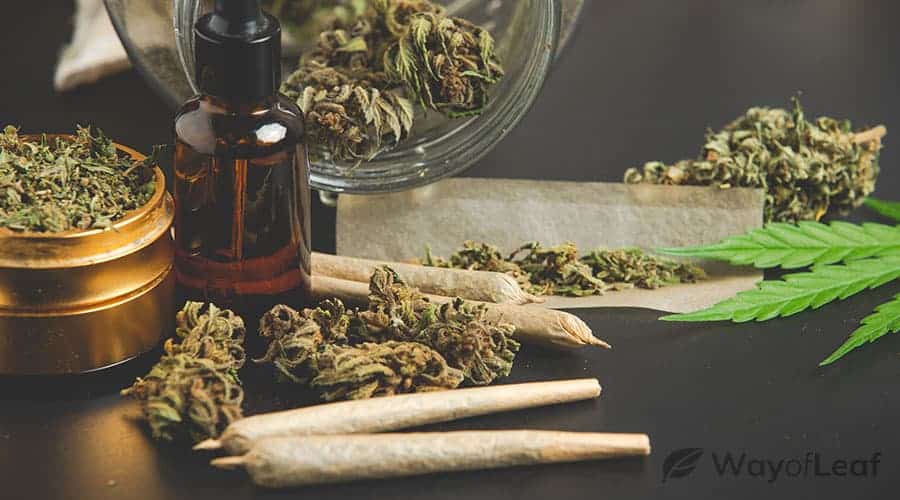 In other words, an average-sized man would have to consume at least 20,000 marijuana cigarettes in 15 minutes to induce a lethal response.

DID YOU KNOW? An average-sized human would have to consume  ~20,000 marijuana cigarettes in 15 minutes to induce a potentially lethal response.

A 2014 study by Hartung et al., published in Forensic Science International, reported that the LD50 of marijuana in humans was 30 mg/kg. This means a 150-pound man would need to consume two grams (2,000 mg) of pure THC to be in danger of overdosing.

In most states, you won’t find edibles with more than 100mg of THC. In theory, you could place yourself in danger if you eat 20 such bars. In practice, however, we hope no one is foolish enough to eat so much THC chocolate. Nonetheless, even a quarter of one 100 mg bar could be enough to cause specific negative side effects.

Everyone reacts to THC differently, and overconsumption can lead to tragedy. In 2014, Levy Thumba, a student at Northwest College in Wyoming, visited Denver. He ate an entire lemon and poppy seed cookie that contained 65mg of THC.

That night, he woke up several times in an incoherent state. Eventually, he began smashing the furniture, lamps, and TV in his hotel room. After running from the room, he tumbled over the railing on an elevated hallway and fell to his death.

What Happens When You Over-Consume Marijuana?

Symptoms of marijuana “overdose” vary according to each user and depend on numerous factors including:

One of the most common situations is for a user to be overwhelmed by the physical and mental effects of marijuana. A lack of experience means they panic when their body and mind act ‘unusually,’ as was possibly the case with Levy Thumba. As a result, symptoms of panic set in such as labored breathing, vomiting, and nausea.

Other common side effects include anxiety and paranoia. In rare cases, when a patient has gone way over the top with consumption, they can become psychotic.

How Do Hospitals Treat Patients with a Cannabis Overdose?

Hospital treatment depends on the type of symptoms and their severity. For example, a patient with vomiting and nausea may require IV fluids for hydration and anti-nausea medications. For agitated patients, a sedation medication such as a benzodiazepine is sometimes necessary.

However, in many cases, physicians realize that the best option is to calm the patient and give them time to ‘come down’ from their high. One doctor spoke about a situation where a man was eating in a fast-food restaurant and called 911 after smoking weed. He said he believed he was about to choke.

Once he arrived at the ER, doctors found that he was suffering from nothing more than anxiety and cottonmouth. The attending physician even told the man to finish eating his burger! After allowing the patient time to calm down, the doctor sent him home.

It is important not to confuse the term ‘overconsumption’ with the term ‘overdose.’ Although it is technically possible to overdose, it is not something that has reliably been confirmed in recorded history. There are some claims that people have died from marijuana poisoning, but there are no official cases of a cannabis overdose – ever.

There are no official cases of a cannabis overdose — ever.

Even so, it would help if you avoided going wild with potent cannabis. If you exceed your tolerance level, you may suffer from rather unpleasant side effects. These can include things like anxiety, paranoia, vomiting, and extreme nausea. There is even a chance of a tragic accident occurring because you were unable to control your thoughts and subsequent actions.

If you are not used to consuming marijuana, be careful! This is especially the case with edibles where it is all too easy to overconsume THC. After a while, the ‘high’ can become too much for you to bear. Before you know it, you’re clutching your Whitecastle sliders in an ER, wondering how the hell you got there. Please, don’t let that happen to you. Use marijuana sensibly!