Perfect for every pocket!

According to recent data from Statista, the average price of high-quality weed is $319.47 per ounce in the United States. ‘Mids’ marijuana costs around $266 per ounce on average. Go to Mississippi for the cheapest medium-grade herb; it costs around $170 per ounce. 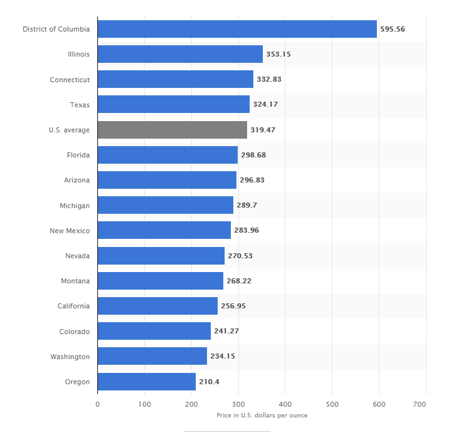 As you can see, the prices are incredibly reasonable in most states where recreational marijuana is legal. Residents of Oregon, in particular, are living it up by paying just $210 per ounce! Remember, this is HIGH-quality marijuana we are talking about! One would expect the lower prices in states where one can freely purchase the herb.

However, in Illinois, the latest recreationally legal state, the price is currently extremely high at $353 an ounce. Much of this is due to the lack of dispensaries. Travel to D.C., and you get gouged! At almost $600 an ounce, you are better served taking a road trip for cheaper pot, although you run the risk of arrest for transporting cannabis across state lines!

In general, however, living in a state where marijuana is legal increases your chances of finding low-cost weed that still hits the mark in terms of quality.

Unfortunately, if you live in a state where there is no legal recreational market or functioning medical marijuana laws, you’ll have to try out the black market. Not only are prices much higher, but you’re also committing a state and federal offense, which could lead to serious jail time!

Your best bet for cheap legal marijuana is a medical cannabis dispensary where prices tend to be lower than anywhere else. It pays to shop around because if you don’t, you could end up paying $30 a gram when another dispensary is offering similar quality weed for just $8 a gram!

Naturally, buying in bulk reduces the price, and if you live in a state such as Colorado, you’re allowed to grow your own! Despite California’s reputation for marijuana, it is the state to avoid. Cities such as San Francisco, L.A., and San Diego have among the most expensive cannabis in America.

To find high-quality, low-priced weed, it is crucial to understand the factors that drive the pricing in the first place.

As is the case with alcohol, taxes transform marijuana from a low-priced item into an expensive one. As every single state has its tax level, it is essential to do your research and find out the worst culprits. For example, you’re hit with a 37% retail tax in Washington State, while the rate is approximately 17% in Oregon. 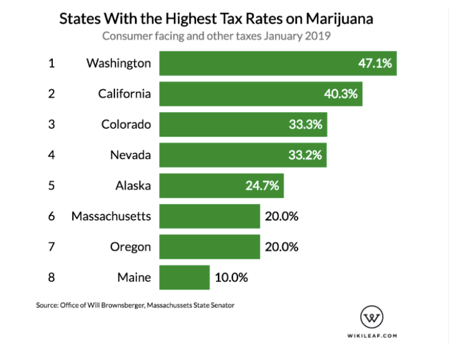 Sadly, these taxes are the tip of the iceberg. Most states have additional fees that bring up the price. In Alaska, for example, growers must pay an extra $50 per ounce they grow. While California ‘only’ has a sales tax of 15%, its litany of extras means the overall rate is only slightly below that of Washington state, where the total tax is almost 50%!

While taxation also has an impact on this factor, the main issue in location is supply and demand. As there is a significant level of demand in places like San Francisco and Los Angeles, prices will be higher than in areas of lower demand. However, if you’re a savvy bargain hunter, you might find a few stores with an enormous supply of weed and not enough customers, which is the case in many locations in Oregon.

It is also a fact that the number of places that sell marijuana in any given area is a significant factor in pricing. If a large city only has a handful of stores, prices will rise.

Although it is possible to find high-quality marijuana at reasonable prices, you can’t expect to find top-end weed for bargain bucket prices. Strains containing high levels of THC and CBD won’t be cheap, nor will marijuana known for its fantastic smell or aesthetics.

On the flip side, spending your hard-earned cash on low-grade weed is not an option whether you’re using it for medicinal or recreational purposes. Remember the old saying: “Buy cheap, pay twice.” Don’t waste money on rubbish; shop around and save more to get the best possible marijuana experience.

Other factors that impact price include political issues, red tape, and even environmental issues such as wildfires and droughts. Some growers lost an entire season’s crop in California’s recent fires.

In any case, let’s look at five excellent marijuana strains that won’t break the bank. We will provide the (approximate) average price per gram for each strain along with the cheapest locations. 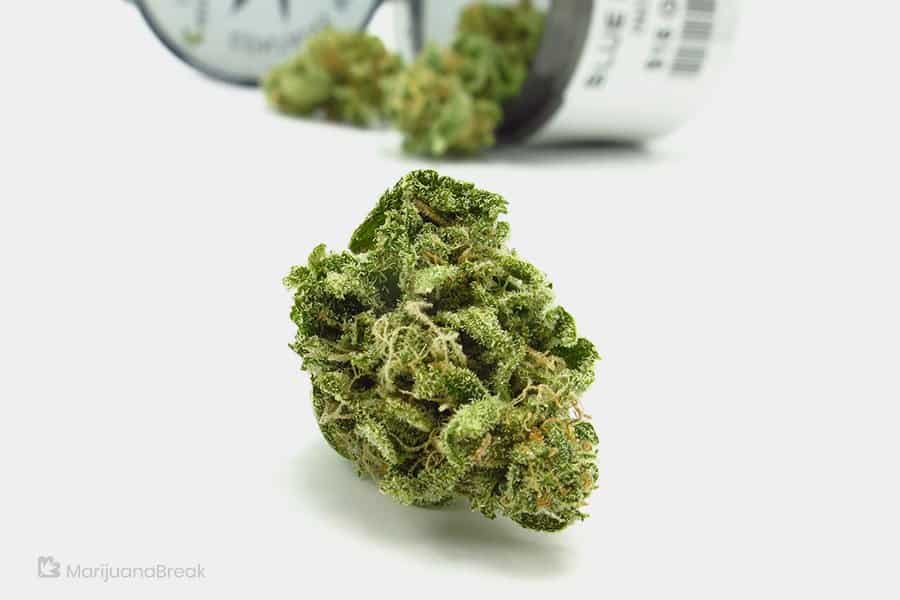 1 – Blue Magoo – The Marijuana Strain with the Memorable Name

The average price for this strain is little over $10, but you can get it for a few bucks in Eugene, Oregon. Blue Magoo is a hybrid strain that contains a hefty 16% THC. It is a cross between a Blueberry strain created by DJ Short and a William Wonder phenotype called F2.

Users of Blue Magoo find that it offers a sedative effect coupled with a cerebral high. While it is ostensibly a hybrid, this strain is considered to be more on the indica side, which is why it is such a surprise that it hits you so quickly. Despite the sedative effects, Blue Magoo provides light mental stimulation before finally helping you drift off to sleep. 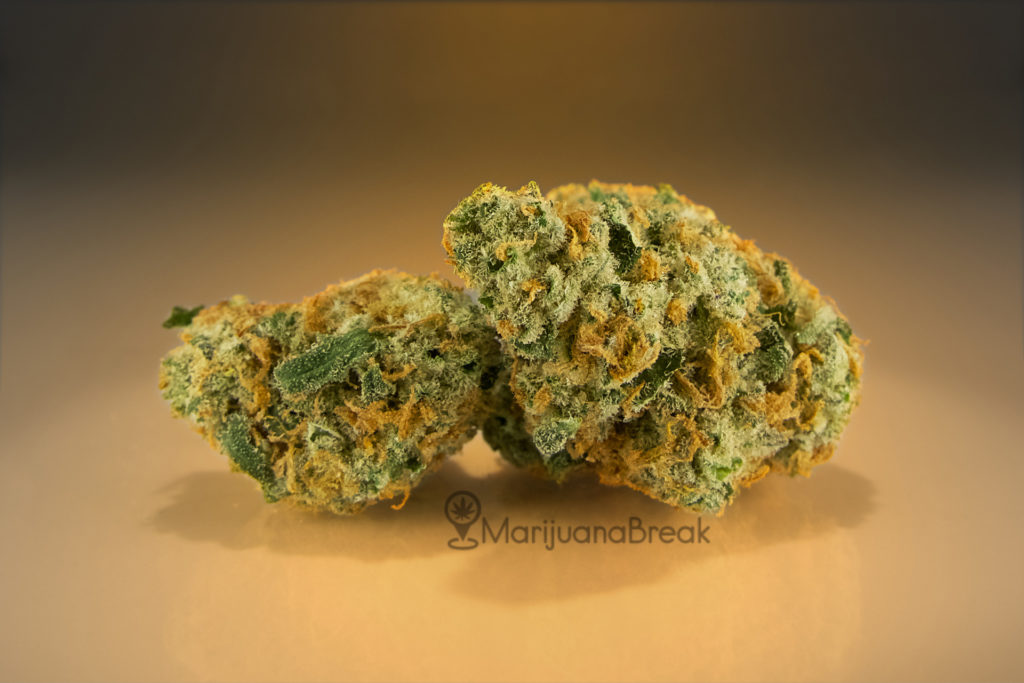 At an average price of under $8 per gram, it is hard to go wrong with Northern Lights. You can purchase it for just $4 a gram in Eugene, Oregon, which is one of the best places in America to buy high-quality weed at knockdown prices. This strain is a cross of a Thai Sativa with an Afghani Indica.

Northern Lights also happens to be one of the most famous strains ever as smokers love the high THC content (21%) of this indica. As it is so potent, it only takes a couple of hits to start feeling the effects. It all begins with a euphoric and relaxed sensation, and it is the ideal strain to treat insomnia and depression. 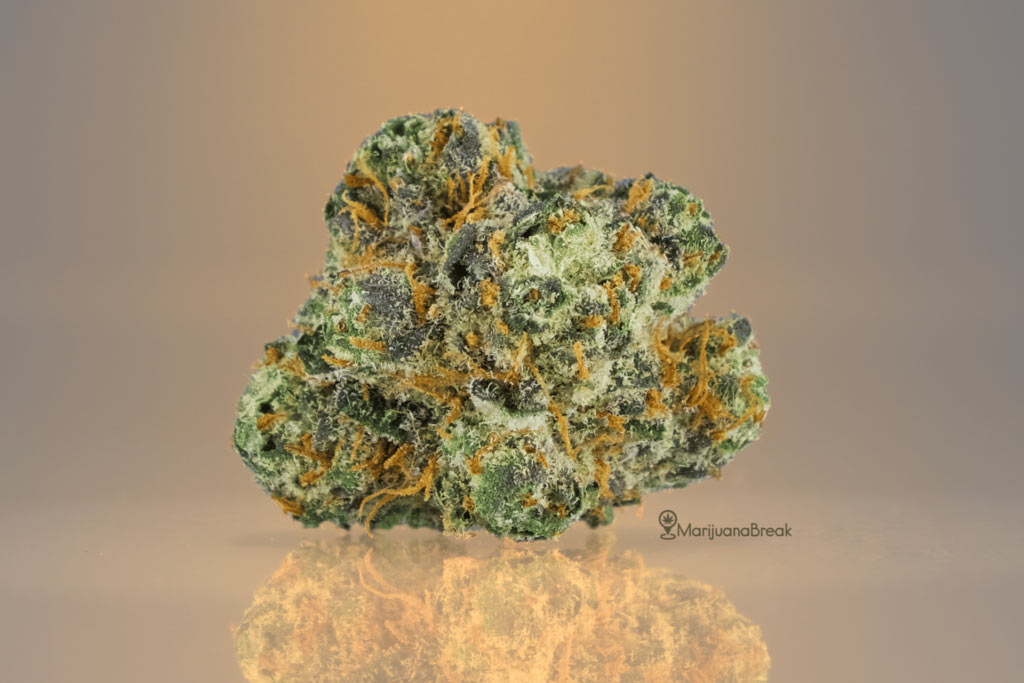 Bubba Kush costs an average of around $10 a gram, but you can get it for $7 in Portland, Oregon. This heavily indica strain is extremely high in THC (up to 27%), and since it is 100% indica, you can expect the couch to be your best friend soon after smoking it! Created in 1996, Bubba Kush is a cross of an Afghani or Northern Lights, and OG Kush.

One thing you’ll notice about Bubba Kush is the distinctive sweet taste you enjoy when smoking it. It hits you pretty quickly after that and you should feel completely relaxed. It is not a strain for daytime use, but if you need a good night’s sleep, Bubba Kush is the answer.

4 – Pennywise – The Cannabis Strain That Fits the Bill

Much as its name implies, if you plan to be wise with your pennies then you may want to consider purchasing the cannabis strain Pennywise. This option has an incredibly high CBD content and is definitely a hard impact indica. The genetic makeup of Pennywise is unique, containing a 1:1 CBD to THC build, meaning that it is suitable for a number of different cannabis consumers for a variety of ailments.

You’ll notice the intriguing combination of coffee and pepper notes, followed by a flavor that is full of bubblegum and lemon. The high from Pennywise is rather euphoric, while still keeping the mind clear and open. 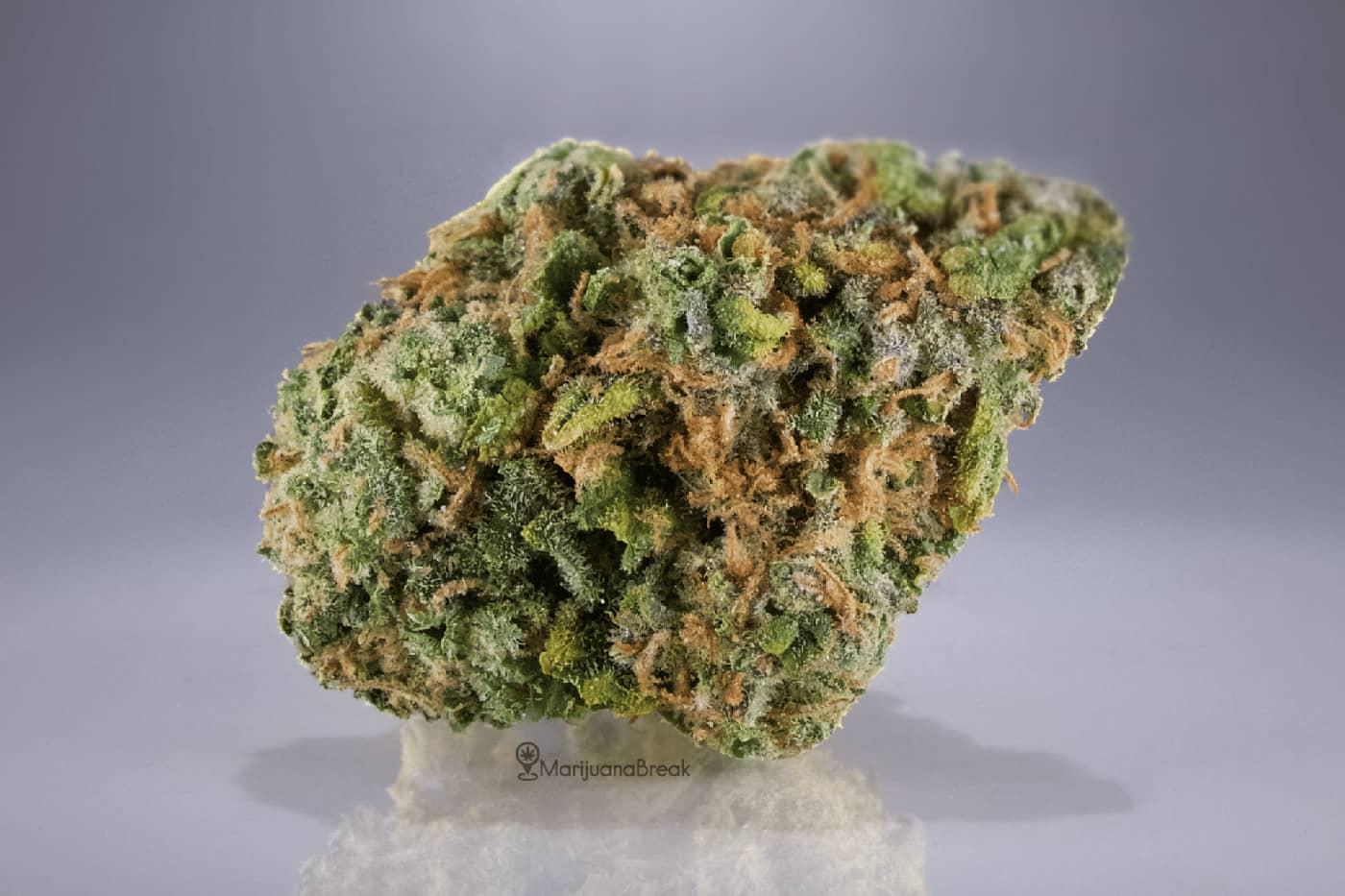 If you were ever in Amsterdam in the 1990s, you probably smoked White Widow as it was a coffee shop favorite. Its popularity hasn’t diminished in the decades since, which is why it’s a surprise to find it available for $10-12 a gram on average. Again, you will find it for as little as $4 or $5 a gram in Eugene. White Widow is a cross of a South Indian indica with a South American sativa.

It is a sativa-dominant hybrid (60%) that contains up to 25% THC along with small amounts of CBD and CBN. If you’re looking for a marijuana strain to help you unwind and relax, White Widow is a perfect choice. Just be wary if you’re a newbie because the sweet sugary smoke produced by this strain could lead to fits of coughing in those unused to the experience.

With the growth of the industry, it is no longer a case of ‘good weed is hard to find.’ You can find dozens of exceptional strains for $10-15 a gram, and best of all, there are so many strains on offer that you can find ones to suit your specific needs.

8
6 min read
Join the discussion
TOC
Premium
Your subscription has ended
If you love cannabis and want to support our site, join WayofLeaf Premium today and unlock
Best of all, part of your membership fee will go towards supporting the fight to legalize cannabis.
Sign Up for WoL Premium
Not now
I already have an account
×
Log in to Your Premium Account