Prostate cancer is the second most prevalent form of cancer among American men, behind only skin cancer. According to the American Cancer Society, there are almost 250,000 new cases a year. Approximately 14% of men will fall victim to the condition during their lifetime.

Additionally, after lung cancer, prostate cancer is the second most fatal cancer among American men. Approximately 2.6% of those who suffer from the condition will die from it. In the U.S., an estimated 34,000 people die from the disease annually. Among men with local or regional prostate cancer, however, the outlook is more positive. 98% are still alive after ten years, while 96% are still alive after 15 years.

While there are many treatments for the condition, research suggests that CBD might kill prostate cancer cells. Though clinical trials do not yet verify this, it is a fascinating area of research.

This article will discuss CBD for prostate cancer and the relevant scientific research that exists on the matter. We’ll dive into available studies and attempt to find out whether CBD is a potential option for people living with prostate cancer. First, though, let’s discuss the condition itself.

What Is Prostate Cancer?

DID YOU KNOW? Men aged 50+ are at the greatest risk for prostate cancer. In most cases, victims will not notice symptoms until the cancer’s later stages.

Although doctors can treat prostate cancer if it remains localized, the condition is often deadly if it spreads through the body. While doctors are not 100% sure what causes prostate cancer, most agree that diet is a factor. Eating large amounts of fat from red meat may contribute. 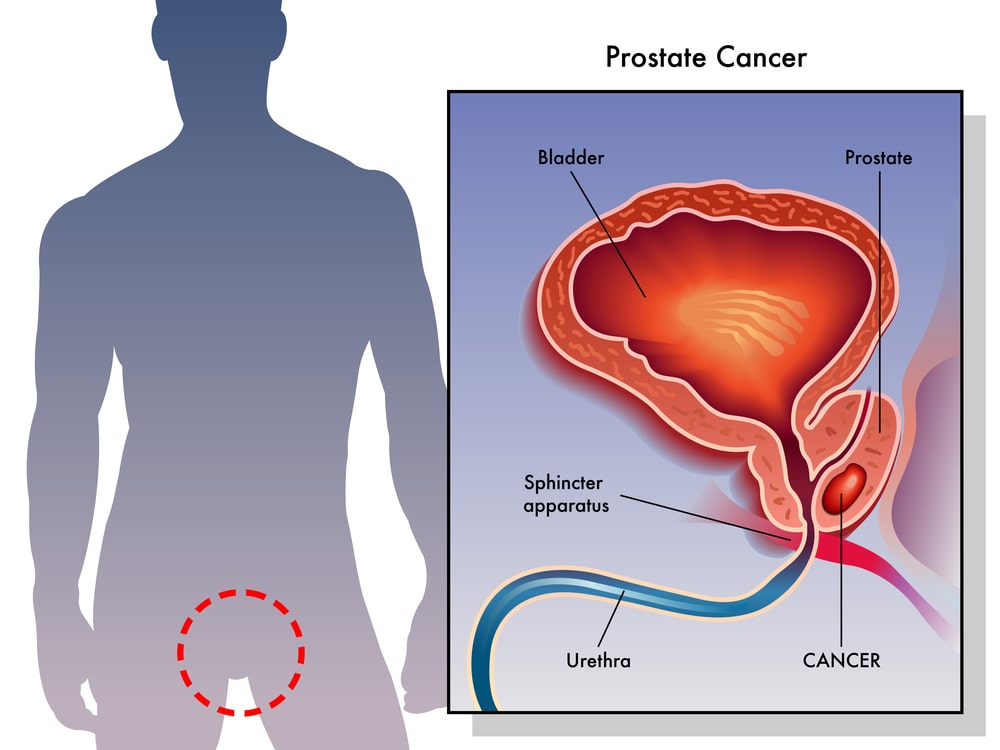 It is known that meat cooked at high temperatures can produce cancer-causing substances. This may include substances that galvanize prostate cancer. Doctors also believe that high levels of testosterone increase prostate cancer risk, as does lack of exercise.

Cannabis has been championed as a means of easing the effects of chemotherapy for some time. However, new research suggests that it may also be capable of slowing – or altogether decreasing – the progression of cancerous cells.

In 2006, one of the first studies of its kind looked at the impact of THC on nine patients with glioblastoma multiforme – a type of brain tumor. The average life expectancy of these patients was 24 weeks. The study determined that THC inhibited the proliferation of tumor cells in vitro and decreased the prevalence of tumor cells in two patients when observed with immunostaining techniques. 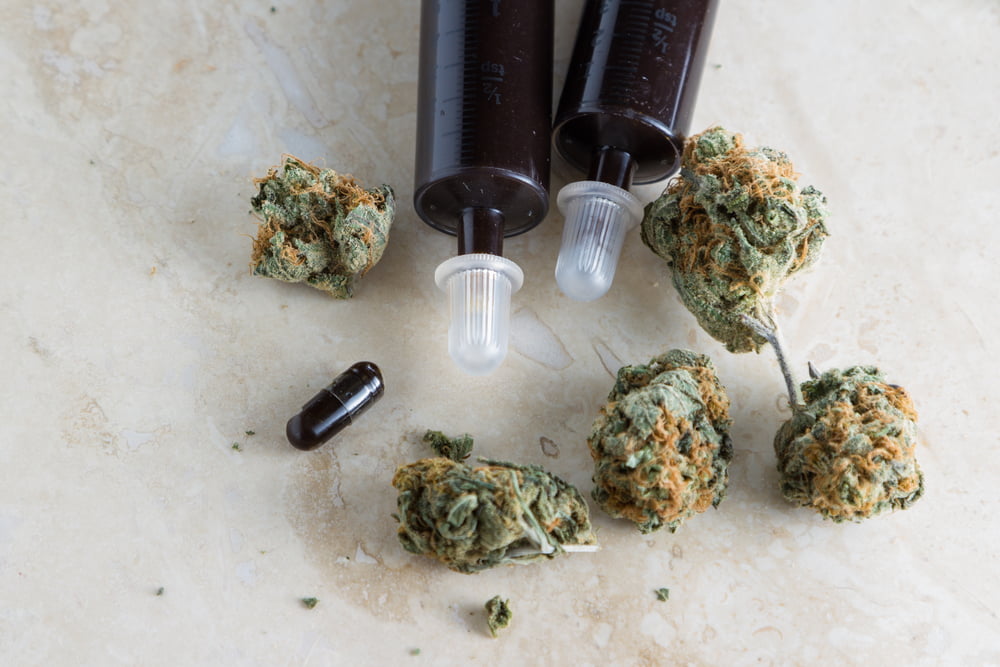 Regarding cannabis and prostate cancer, positive results on animal models have led researchers to claim that preclinical evidence is sufficient to warrant clinical trials of cannabinoid medicines as anti-cancer treatments.

In the cited study, experts observe that prostate cancer cells have increased expression for cannabinoid receptors. In other words, it appears that cancerous prostate cells may be prone to the influence of pro-apoptotic activity in cannabinoids like CBD.

It is our conclusion that it would be of interest to conduct clinical trials involving medicinal cannabis or other cannabinoid agonists … in men with bone metastatic prostate cancer.

Little is known regarding the specific physiological effects of cannabinoids on cancerous prostate cells. However, we know that cannabinoid activity in humans results from molecular interaction with the endocannabinoid system or ECS. The excessive number of receptors found on prostate cancer cells suggests that there is potentially a correlation between cancer cell proliferation and the presence of endocannabinoids.

Endocannabinoid deficiency is a condition wherein the body does not produce enough cannabinoids. Yet, the relationship of this condition with the development and progression of prostate cancer is, as of yet, unknown.

The Anti-Androgenic Effects of Cannabinoids

Androgens are male sex hormones (including testosterone) that cause the growth of prostate cells. One notable treatment for this form of cancer is known as ‘androgen deprivation therapy.’ As the name suggests, it deprives the body of androgens to slow the growth of cancerous cells.

At least one study suggests that cannabis possesses anti-androgenic properties. Anti-androgenic activity may impact the ability to grow muscle. The possible correlation between this unique cannabinoid property and prostate cancer progression is intriguing.

While there are no current clinical studies on the use of CBD oil for prostate cancer, general research in the field is highly intriguing.

CBD: A Supplementary Natural Defense Against the Progression of Prostate Cancer Cells?

While marijuana also contains the intoxicating compound THC, CBD is entirely non-intoxicating. This means it poses no risk of causing a high. As for the specific use of CBD for prostate cancer, it is important to note there is minimal clinical data on the matter.

According to the NIH PubChem database, however, CBD possesses “anti-proliferative, anti-angiogenic and pro-apoptotic activity.” We know that the anti-proliferative effects of anandamide, an endocannabinoid in humans, work to prohibit metastatic prostate cancer cells. Based on this simple correlation, it is no stretch to surmise that CBD and its similar physiologic properties may produce similar effects.

Of course, the advancement of research is necessary to discuss CBD as a prostate cancer treatment realistically. While it is a fascinating area of research, much more information is required.

The ‘Best CBD Oil’ for Prostate Cancer? A Word of Warning

No company should claim to sell the ‘best CBD oil for prostate cancer.’ We’re not aware of any manufacturers making this claim. Nonetheless, it is always wise to use discretion when choosing any CBD product. Discrepancies in quality are common among various CBD products, so take the time to do plenty of research. Find a good, reputable brand that has quality customer reviews.

Also, we remind readers that CBD oil is not a treatment or a cure for prostate cancer. While research on the topic is largely positive, there is no clinical evidence that CBD works to slow or stop the spread of cancerous cells in the prostate.

While limited, research on medical cannabis, CBD, and prostate cancer is positive. Researchers know, for example, that CBD possesses anti-proliferative and pro-apoptotic properties. These properties may work to slow or stop the spread of cancerous cells in the prostate.

Again, however, do not misinterpret initial research as clinical evidence. Much more clinical information is needed before doctors can consider CBD oil for prostate cancer a reliable treatment. As always, speak with a doctor before implementing CBD into a daily routine.

The anti-proliferative properties of CBD may have significance in terms of inhibiting the growth of prostate cancer cells.

The complete guide to marijuan…

Best and Most Effective CBD Oils for Sciatica [2022 Update]

4
7 min read
Video
Join The Discussion
TOC
Premium
Your subscription has ended
If you love cannabis and want to support our site, join WayofLeaf Premium today and unlock
Best of all, part of your membership fee will go towards supporting the fight to legalize cannabis.
Sign Up for WoL Premium
Not now
I already have an account
×
Log in to Your Premium Account