According to the Glaucoma Research Foundation, an estimated three million Americans suffer from the eye condition and half of them are unaware of their issue. It is the leading cause of blindness in the United States and 10% of people with the condition experience vision loss – even when they get the proper treatment.

In the U.S. alone, glaucoma accounts for up to 12% of all cases of blindness.

It is especially prevalent amongst African-Americans, who are up to eight times more likely to become blind from glaucoma than Caucasians. Despite all of the above, a 2002 Prevent Blindness America Survey uncovered a shocking fact: 30% of people had never heard of glaucoma!

Moreover, 50% of those surveyed had heard of the condition but were unsure of what it was. Let’s try to shed some light on this condition and see whether or not CBD oil for glaucoma may be a long-term treatment option.

Also known as the ‘silent thief of sight’, glaucoma is an eye disease that results in elevations in fluid pressure in the eye. If you fail to treat it in time, it can cause loss of vision and even permanent blindness.

In primary glaucoma, the cause is largely unknown. In secondary glaucoma, however, the condition has a known cause, such as diabetes, inflammation, cataract, or a tumor.

Risk factors of glaucoma include:

Also, did you know that there are several types of glaucoma?

This type of glaucoma affects up to 95% of people with the condition. Initially, there are no symptoms and it occurs because the drainage canals of the eyes get clogged over time, leading to increased pressure buildup. The intraocular pressure – or IOP, as it’s called – increases because the right amount of fluid cannot properly drain out of the eye.

If you have open-angle glaucoma, the drainage canal entrances are working properly,  but there will be a clog deep inside the canals. The condition develops slowly and you may not experience any loss of vision for years. If you can catch it early, medication can help treat the condition.

Also called narrow-angle or acute glaucoma, this condition is relatively rare and involves intraocular pressure that rises rapidly and without warning. The drainage canals become blocked because the iris is not as wide as it is in a healthy eye. The iris’ outer edge bunches up over the canals when the pupil enlarges too fast or too much (such as when you suddenly enter a dark room from a bright outside area).

Other Types of Glaucoma

The two glaucoma types we have mentioned above comprise the vast majority of cases. There are however some rare forms of the condition, which include:

What Are the Most Common Glaucoma Treatments?

Several forms of glaucoma treatment involve surgery in an attempt to fix the issue. When it comes to open-angle glaucoma, eye drops are the most commonly prescribed option.

There are various types of medicated eye drops that are specifically formulated to treat glaucoma, including:

These medications tend to work in different ways. For example, beta-blockers like Timolol work by decreasing the production of fluid that leads to increased IOP. Prostaglandin analogs, such as Xalatan and Travatan, increase the outflow of fluid from the eye, though these medications come with an array of side effects. For instance, those taking beta-blockers may experience the following:

CBD for Glaucoma: Can It Work? 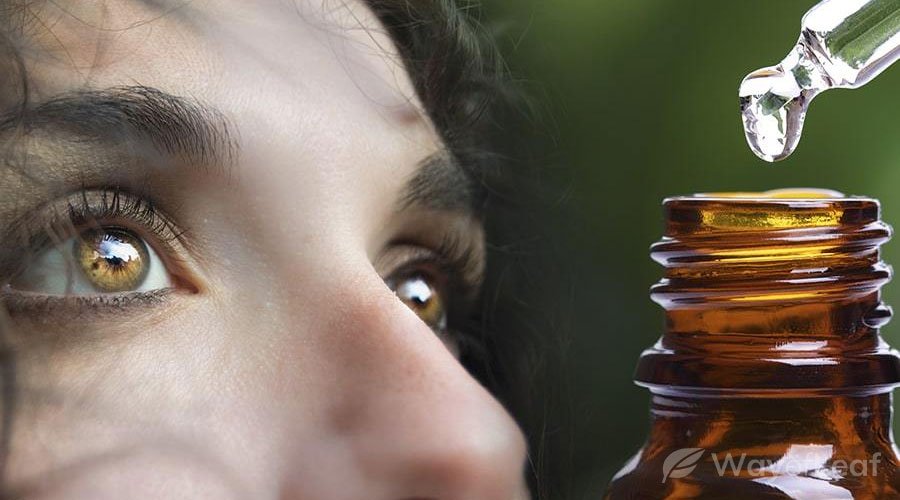 Please note that at the time of writing, there is no permanent cure for glaucoma. Nor have there been any large-scale clinical trials reporting on the specific effects of CBD for glaucoma.

However, a large number of studies have shown cannabis as a whole – even those strains high in THC –  to be a viable and highly effective treatment. A 1971 study by Hepler and Frank, for example, discovered that cannabis lowered intraocular pressure (IOP) by up to 30%.

The problem with using cannabis, though, is that you have to consume it every few hours because the effects don’t last very long.

In other words, you have to be high for most of the day. While this might seem like a pleasant way to live for some, it is not practical for most people. Also, while cannabis has a low addiction rate, using it six or more times a day would greatly increase the risk of developing a dependence on the plant.

This is where CBD comes in. Cannabidiol is one of marijuana’s non-intoxicating cannabinoids, and some research has suggested that it is just as useful as THC and other psychoactive compounds for the treatment of glaucoma.

The endocannabinoid system (ECS) was only discovered in 1992, but research since then has uncovered some pretty exciting things. In fact, the ECS has been called ‘the future of medicine’ by some experts.

Glaucoma and the Endocannabinoid System

The ECS is one of the human body’s most important physiological systems. It has an impact on almost every aspect of health, including pain modulation, immune response, and inflammation. Regarding glaucoma, cannabinoid receptors are involved in the ocular tissues which regulate IOP.

Researchers are hoping to create medications from cannabinoids such as CBD that can target these ocular tissues in an effort to reduce IOP and eventually protect retinal cells from the permanent damage that leads to blindness.

Incredibly, there has been evidence for over four decades that CBD could help treat glaucoma. The study, published in the International Journal of Pharmacology and Biopharmacology in 1979, analyzed the effects of CBD on 16 patients with open-angle glaucoma.

After taking CBD, the patients experienced a reduction in blood pressure and an increase in heart rate. Ultimately, this resulted in a decrease in IOP behind the eyes – the direct cause of glaucoma. Moreover, it was observed that the effects of CBD lasted longer in patients with hypertension.

The issue now with existing cannabis-based glaucoma treatment is bioavailability.

Although topical application via eyedrops works best, it still means that only 5% of an administered dose reaches the target.

This is why some people have resorted to vaping CBD (a potent means of administration for glaucoma) or taking it as an oil to ensure that more of the active compound is actually put to use.

It is important to note, though, not to use too much CBD oil as a 2006 study by Tomida et al. found that CBD doses of above 40 mg can actually increase IOP in the eye. In the majority of instances, glaucoma sufferers have found that doses between 10-20 mg have been effective. (Though please note that this is NOT a recommended dosage or valid medical treatment option).

Final Thoughts on CBD for Glaucoma

Moreover, the vaso-relaxant properties of CBD could increase ocular blood flow and its anti-inflammatory properties have the potential to provide relief not just for glaucoma, but also for other inflammatory eye conditions as well.

One of the biggest problems with existing glaucoma medications (such as those listed above) is the litany of side effects. In most instances, this is far less of an issue when using cannabis. While the THC in marijuana results in a psychoactive ‘high’, CBD is non-intoxicating. Therefore, you can use it regularly, safe in the knowledge that it won’t impact your judgment and side effects are minimal.