There are a great many different mental and behavioral disorders that exist, affecting millions of people. Though they range in severity and intensity, there is one that is likely to be the most prevalent in childhood: ADHD.

ADHD, or Attention-Deficit/Hyperactivity Disorder, is a complex disorder. It has been misclassified and overdiagnosed in the last decade. Sufferers deal with all kinds of horrendous symptoms and effects, leaving them unable to function appropriately or comfortably in society.

However, hope is not entirely lost. In recent years, scientists have theorized that we could be using CBD oil to treat ADHD. So what does the science say when it comes to CBD and ADHD?

First of All: What Is ADHD?

ADHD is a behavioral disorder that makes it difficult for the sufferer to concentrate. Typical symptoms include chronic inattentiveness, hyperactivity, and an increase in impulsive actions.

This makes it so that someone with ADHD is not only incapable of paying sufficient attention or remaining present in the moment. They also cannot stop themselves from acting out on their impulses. These can range from sporadic movements and twitches to needing to immediately express their desire for physical activity in the most severe cases.

As might be imagined, the expression of this disorder is most readily apparent in schools. When a child has ADHD, they are incapable of paying attention in class or remaining in their seats. However, it doesn’t just stop there. They might be incapable of eating correctly, falling asleep, or remembering things they are told.

The condition itself is not fully understood neurologically. However, most scientists agree that ADHD is typically caused by a lack of sufficient release of dopamine within the brain.

A big problem is that some people believe ADHD is a made-up condition used to explain away bad behavior. This happens because of the considerable frequency of misdiagnosis in recent years, due to the lack of sufficient classification criteria for the condition.

This means that many doctors and psychologists were diagnosing people with ADHD when they were just badly behaved or were struggling with something in their personal lives.

So, what are we doing to address it? What kinds of treatment options are available for people living with ADHD?

What Are We Doing Currently to Treat ADHD?

Currently, experts treat ADHD with a mix of both medications and cognitive behavioral therapy. By combining drugs that seek to alter brain function with psychoanalytic techniques, doctors hope to retrain the brain.

Ritalin and Adderall are two of the most common treatments for ADHD. Both deal with the outward symptoms of the condition and try and make day to day life more bearable. The way the drugs work is by regulating the release of dopamine, as well as the rate at which the brain releases norepinephrine.

One of the positive effects of these drugs is that they also improve cognitive abilities to help people living with ADHD to focus. This means that users experience a much larger memory capacity, as well as a compulsive desire to be working on or completing something.

This might sound wonderful, but remember that these drugs are changing brain functions and overloading parts of the brain to try and compensate for insufficiencies in other areas.

These drugs become frequently misused, due to being massively overprescribed. This has led to a severe addiction epidemic that results in thousands of people hooked on pills that alter their mental state unnecessarily. Many people use them as a study aid or concentration tool, so much so that Adderall is infamously a popular street drug in competitive universities.

If only there were some other, better way. Could we be using natural CBD oil to try and treat ADHD instead?

How Does CBD Oil Work with ADHD?

The idea of using CBD oil to alleviate the symptoms of  ADHD is still a somewhat contested subject in the USA and around the world.

Though there are plenty of people that use CBD oil to treat all manner of different conditions these days, there are still plenty that fear CBD oil due to it coming from cannabis, a long-forbidden plant in the US. 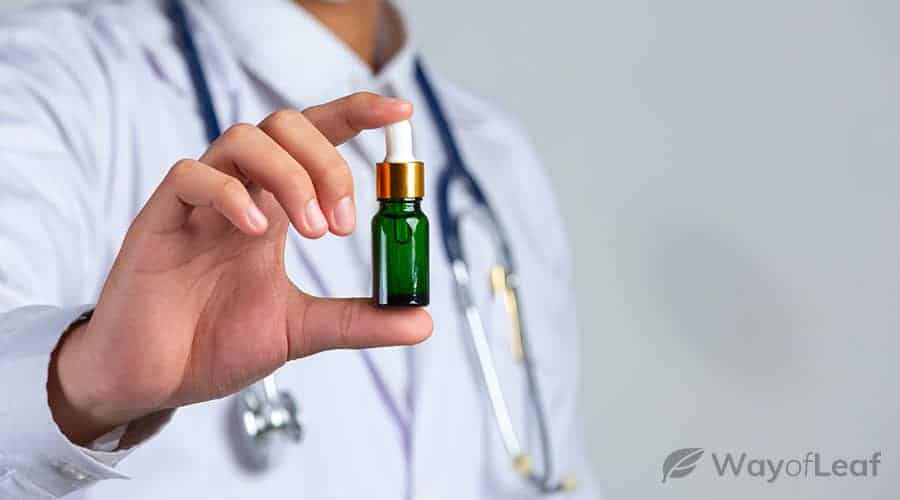 However, this is slowly changing, with more people (and scientists) gradually realizing CBD’s potential uses.

People often view cannabis users as being inherently lazy and don’t associate cannabis use with having the ability to focus. Considering this reputation, it makes sense that people might hesitate to prescribe cannabis to those struggling with ADHD.

CBD and ADHD: The Research

Certain studies, like this one by the University of Washington for the Alcohol & Drug Abuse Institute, state that marijuana is potentially dangerous for people with ADHD. It increases the intensity of ADHD symptoms, as well as increasing the chance of developing cannabis misuse disorders.

Although THC and CBD are two phytocannabinoids found in the cannabis plant, they are entirely separate compounds with very different effects. The main difference between the two compounds is that THC induces a mind-altering high, and CBD does not.

Current scientific studies into the potential for using CBD oil to treat ADHD are few and far between, sadly.

CBD Oil’s Collaborative Effects – What Else Can It Do?

However, there is one more important thing that many people skip over when considering the benefits of CBD in treating the symptoms associated with ADHD; its general effects on the body. CBD is well known for being able to heighten mood and generally help with symptoms like anxiety and depression. It is also incredibly effective at treating addiction.

In their seminal study, Gonzalez Cuevas et al. evaluated the anti-relapse potential of a transdermal CBD preparation in animal models in relation to drug-seeking behavior, anxiety, and impulsivity.

Another significant finding from Gonzalez Cuevas et al.’s study, was that despite plasma and brain CBD levels only being detectable for three days, reinstatement remained attenuated for five months after the treatment had been terminated.

One study by Barchel and colleagues showed that CBD can significantly improve hyperactivity symptoms in children with Autism Spectrum Disorder. However, to date, there is no evidence from randomized control studies that supports cannabis or CBD as an effective treatment for ADHD.

A randomized-controlled trial carried out by Cooper et al. did, however, find a nominally significant improvement in symptoms of hyperactivity and impulsivity in 30 adults who received a cannabinoid-based medication (1:1 THC:CBD).

Final Thoughts on CBD for ADHD

ADHD is one of those conditions that is commonly misunderstood. Many people underestimate how devastating it can be due to its seemingly pervasive nature in today’s society. Even worse, doctors prescribe sufferers far too many drugs to try and deal with it; drugs that are not only potentially harmful but that can be extremely addictive.

Currently, research on CBD oil and its effects on ADHD is still in its infancy. However, scientists across the globe are beginning to look at it and take it seriously.

Various studies point towards the idea that CBD can help treat ADHD not directly, but through association. It can help deal with the symptoms by promoting healthy brain activity, as well as through improved dopamine release.

Until the point that greater scientific consensus is reached, we at least know one thing. CBD oil seems capable of improving the lives of those with ADHD; even if it is only enough to make their symptoms more bearable.

5 Best and Most Effective CBD Oils for Sciatica [2021 Update]

The 2021 guide to protecting your skin