The number of Americans smoking tobacco cigarettes is falling rapidly. According to CDC data, the rate of adults who smoked cigarettes declined from 20.9% in 2005 to 15.5% in 2016, and this percentage reached an all-time low of 13.7% in 2018.

This doesn’t mean that quitting is getting easier. Still, for the millions of Americans planning to stop smoking cigarettes, studies suggest that CBD may reduce nicotine cravings and help with other side effects of quitting smoking.

This article looks closely at the practicality and potential of using CBD to help quit smoking. First, though, let’s discuss why cigarettes are so addictive in the first place.

Why Are Tobacco Cigarettes So Addictive?

For consumers to understand how CBD might work, they need to look at the potential reasons behind tobacco addiction.

Conventional wisdom states that the effects of nicotine cause addiction to cigarettes.

Most experts classify drug addiction as a disease that causes an individual to seek out something compulsively. Addiction can also be chemical, with the body developing a dependence on the drug to function normally. 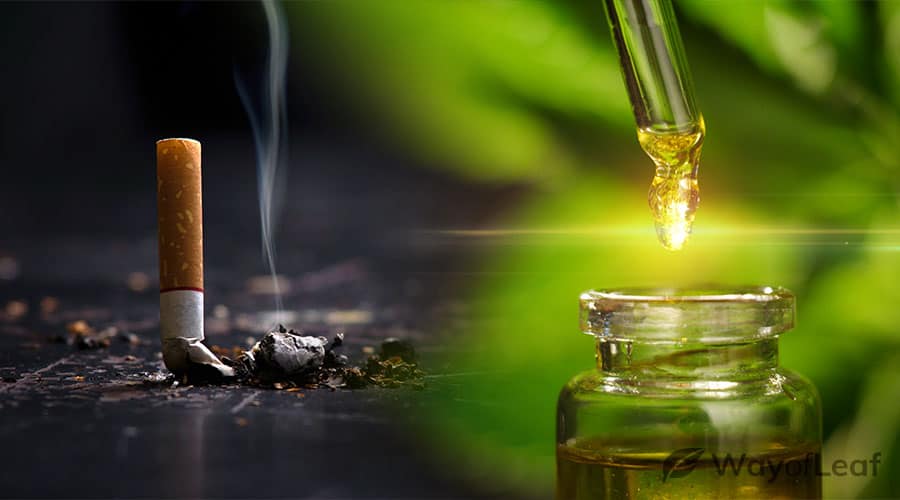 Despite a significant proportion of cigarette smokers attempting to quit, many are often unsuccessful. This suggests there may be other reasons people smoke than the addictive qualities of nicotine. One theory suggests that tobacco addiction is a habit established over a long period.

Experts feel that habits, aka learned behaviors, become ingrained in humans both psychologically and physically, making it very difficult to disengage from them.

Is Vaping CBD a Viable Alternative to Tobacco Cigarettes?

Some experts argue that replacing the compulsion to smoke is the solution rather than trying to quit tobacco altogether. For this reason, many choose to replace smoking cigarettes with vaping e-cigarettes, as the latter is thought to be a less harmful alternative.

That said, vaping is not without its risks, and there was a rise in a condition known as e-cigarette or vaping product use-associated lung injury (EVALI) in 2019. 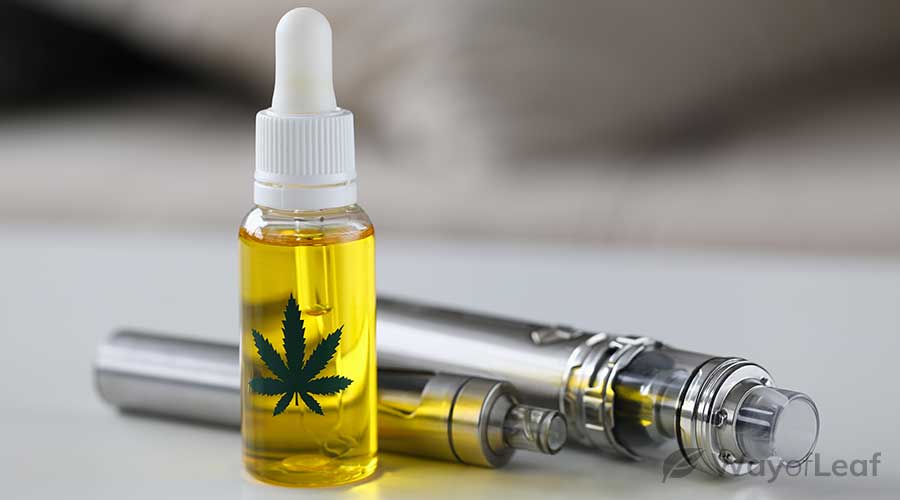 When people smoke cigarettes, they are inhaling carcinogenic substances released from combustion. The simplified idea is that people expose themselves to fewer cancer-causing agents when vaping than when smoking cigarettes (even if little is currently known regarding the long-term effects of vape use).

However, in many cases, vaping still exposes the body to nicotine. So, making the change does not impact the body’s chemical addiction. In some cases, vaping may even increase the amount of nicotine a person consumes (since the process is easier and performed more frequently than smoking).

However, there is a possibility that CBD could prove beneficial for people looking to quit smoking tobacco cigarettes. Let’s see what science has to say about it.

A study by Morgan et al., published in the journal Addictive Behavior in 2013, looked at whether CBD could reduce cigarette consumption in tobacco users. It was a double-blind pilot study that involved 24 subjects, all of whom smoked at least ten tobacco cigarettes a day.

Half of the group were given an inhaler with CBD, while the other half got an inhaler with a placebo. The treatment lasted for one week. All subjects recorded their tobacco cravings and anxiety daily. As part of the study, researchers conducted a follow-up interview 21 days later.

After the initial treatment week, the CBD group smoked 40% fewer cigarettes than before. In comparison, the placebo group showed no difference. While both groups recorded decreased cravings and anxiety during the treatment week, they returned to their initial conditions after 21 days.

The authors concluded that CBD could effectively reduce tobacco cigarette consumption but acknowledged that more extensive studies with longer follow-ups were necessary.

In 2020, a company called The Cannabis Radar conducted a survey featuring 700 volunteers looking to quit tobacco smoking. The participants were asked to inhale CBD oil via an inhaler each time they felt an urge to smoke. Ultimately, 42% of the volunteers reported that they abstained from tobacco cigarette smoking for a month when using CBD. However, one-third of the group couldn’t quit smoking for a week even while using CBD.

Ultimately, this was only a survey rather than a clinical trial. While it yielded interesting results, it can’t be relied upon as evidence that CBD helps people quit tobacco cigarette smoking.

An interesting study looked at the impact of attentional bias, a phenomenon wherein a person becomes strongly focused on specific stimuli while ignoring others. For example, if individuals who smoke tobacco cigarettes regularly watch a show featuring smoking, they are more likely to crave a cigarette.

The study in question, published in the journal Addiction in May 2018, discovered that CBD could reduce attentional bias to tobacco imagery. In the study, 30 volunteers (who were smokers) received instructions to stop smoking for 12 hours. They also took either 800mg of CBD orally or a placebo.

Then they were shown tobacco-related items such as smoking-related scenes and neutral images. The volunteers who consumed CBD didn’t significantly reduce cravings, but they did find cigarette smoking cues to be less appealing.

The study built on a 2010 publication in Neuropsychopharmacology that made similar conclusions regarding the impact of CBD on high-THC cannabis use. In this study, researchers observed the “range of potential therapeutic uses of CBD,” suggesting its ability to “acutely modulate the reinforcing properties of drugs.”

The nicotine in cigarettes is incredibly addictive, and it releases dopamine in the same brain regions as other addictive drugs. Moreover, when you inhale cigarette smoke, the dopamine hits the brain in around 7 seconds, according to Duke University Medical Center research.

Those who try to quit smoking find that withdrawal symptoms present a substantial barrier.

CBD interacts with our endocannabinoid system (ECS). The ECS controls various essential functions, including stress response, sleep cycles, and pain perception. CBD is also an inhibitor of FAAH, an enzyme that breaks down the natural endocannabinoids in our bodies. These endocannabinoids bind to cannabinoid receptors in the brain, CB1, which influence sleep, mood, reward, and pain regions.

When you use CBD oil while trying to quit cigarettes, it could ensure you maintain a high enough level of cannabinoids to mitigate the severity of the withdrawal symptoms.

Benefits of Using CBD Instead of Cigarettes

Certainly, it is incorrect to assume that CBD is a cure-all for quitting cigarettes since research is fairly limited. However, CBD has a few possible benefits compared to tobacco smoking.

You don’t necessarily have to stick to vaping. There are many options, including CBD gummies, oils, chocolate, drinks, honey, and more! Of course, cigarette smokers are drawn to vaping or smoking hemp flower due to the process of inhalation, but you have other choices.

Although vaping is far from 100% safe, it is still likely better for the lungs than tobacco cigarette smoking. Again, you can completely protect your lungs by choosing CBD oils or gummies instead.

One study has found that PG, a popular thinning agent in CBD vape liquids, produces formaldehyde when heated to around 448 degrees Fahrenheit. Therefore, you should either vape at a low temperature or find a vape liquid that doesn’t use PG or PEG 400, which is also harmful.

What About Using CBD Cigarettes to Stop Smoking?

Smoking CBD flower mimics the action of cigarette smoking more closely than any other form of consumption. Smoked CBD flower also boasts a higher bioavailability than other CBD products and takes effect quicker. According to a study published in Chemistry & Biodiversity in 2017, smoking offers fast and efficient drug delivery from the lungs to the brain.

Ultimately, you could feel the effects of smoked CBD flower in a matter of seconds. In contrast, CBD oil can take 15-20 minutes to kick in, whereas edibles may not affect for up to two hours.

However, there are a few things to worry about. Combusting plant material leads to the formation of polyaromatic hydrocarbons, which are also released regardless of whether you light CBD flower or tobacco leaf.

There are also concerns over whether combusted hemp or marijuana could release carcinogens. On the plus side, a study published in Harm Reduction Journal in 2005 found that cannabis and tobacco smoke are NOT equally carcinogenic. The researchers concluded that there was no causal link between smoking marijuana and cancer.

Does this mean that smoking CBD is a harmless habit? No! Excessive usage can still result in respiratory issues such as COPD or bronchitis. Over time, you might find that alternative forms of CBD consumption are better for your lungs.

How to Use CBD to Quit Smoking

With CBD, you have the option to begin by smoking hemp flower if you feel the need to inhale smoke. Vaping is a realistic alternative, but you might want to wean yourself off eventually. Some users mix CBD vape juice with an e-liquid containing nicotine, reducing the strength of nicotine over time.

Ultimately, you can transfer to CBD gummies, oils, or other products that don’t involve inhalation of the substance. However, please note that vaping or smoking CBD offers a higher rate of bioavailability than consuming CBD orally (via gummies) or sublingually (via oils or tinctures).

Here are a few things to consider when buying CBD:

Can I Use CBD Gummies to Quit Smoking?

Absolutely! The CBD in the gummies can help you feel relaxed and perhaps reduce the anxiety felt during the withdrawal phase. You might also find that CBD gummies reduce your nicotine cravings.

While you can also buy CBD chocolate, gummies are far more popular due to their relatively low cost. They are easy to use, offer discretion, and taste delicious. Here are a few of the top brands selling CBD gummies:

As mentioned, research is still in its infancy. Indeed, the studies cited in this article are the primary materials available at this time. If people are addicted to cigarette smoking and have tried everything else, CBD could be an option worth investigating.

There is no shortage of options available for those wondering where to start using CBD vape products to help quit smoking.

Things like CBD-rich hemp flower (used in a dry herb vape) may be a good option, as well as products like CBD vape pens and e-liquids. If you’ve found a CBD product that worked well in helping you to quit smoking, be sure to share your experience in the comments section below.

The Complete Guide on Using CBD Oil for Eczema

How CBD could help

7
3 min read
Video
Join The Discussion
TOC
Premium
Your subscription has ended
If you love cannabis and want to support our site, join WayofLeaf Premium today and unlock
Best of all, part of your membership fee will go towards supporting the fight to legalize cannabis.
Sign Up for WoL Premium
Not now
I already have an account
×
Log in to Your Premium Account