For some reason, the nearly universal consensus to the question ‘is vaping safe‘ is that it’s far preferred over actually smoking. In fact, a three year old study out of the International Journal of Environmental Research and Public Health says that up to 88% of frequent “vapers” feel they’re not doing as much harm to their body as they do when they inhale cigarette (or weed) smoke.

How safe are vape pens? It’s a question worth asking, even if experts are still debating on the answer…

But how true is this? It seems reasonable enough to assume that vaping would be safer than smoking (since we’re essentially just talking about inhaling steam), but once we dig a little deeper, it’s easy (and indeed even a little scary) to see that this is not quite the case.

In this article, we’ll talk about some of the common myths and misconceptions that are lying by in that (seemingly innocent) little cannabis oil cartridge of yours. While it’s certainly a revelation to be able to sit at a bus stop or in a crowded restaurant and take a discreet hit of high-potency weed oil, it’s probably worthwhile to learn a little bit about what you’re actually inhaling, rather than maintaining the assumption that what you’re doing is totally harmless.

[Is vaping safe… really? Keep on reading to find out…!]

As it turns out, it’s not actually the process of vaporizing oil and inhaling the subsequent steam that’s potentially dangerous. Rather, the dangerous part of vaping seems to come from what you’re actually inhaling.

You see, in order to turn high-potency cannabis oil into a liquid that’s actually “vapable,” the liquid has to meet certain criteria.

For one, it has to be of a proper viscosity. 100% natural cannabis oil is a pretty thick, gooey, sticky mess. In order to get it to the point where it can be vaped efficiently, it has to be “thinned” into a more liquidy substance. To do this, manufacturers will typically add a thinning agent that dilutes the marijuana oil down into a nice, fluid substance that responds perfectly to vape pen heating coils.

The only problem with this is the fact that thinning agents are nasty, potentially toxic stuff. Polyethylene and propylene glycol, for example, (which has traditionally been the “agent of choice” for thinning out straight cannabis oil), is known to break down into carcinogenic polymers (such as ethylene oxide) when heated to certain temperatures. Other potentially harmful thinning agent byproducts include carbonyls such as formaldehyde, which is a group 1 carcinogen according to the International Agency for Research on Cancer.

Another massive problem manufacturers face in terms of vape pen safety is deciding whether or not to treat their weed crops with pesticides.

Like any plant, marijuana is susceptible to such hazards as mold, mildew, disease, and, for lack of a better term, plant-eating bugs. In order to avoid these detriments, the vast majority of farmers will have to resort to harsh chemicals in order to keep their crops growing unharmed and unobstructed. The problem is, these chemicals more often than not end up making their way into the final cannabis product – whether that be vape oils, oral tinctures, edibles, or straight flower.

Is vaping safe… or isn’t it?

An easy solution might be to simply buy pure organic, non-pesticide treated product, but this is easier said than done. Being that the vast majority of the cannabis industry is still unregulated, manufacturers pretty much have free reign to do whatever they want when it comes to producing and marketing their products.

Even in supposedly “tightly regulated” states like Washington and Oregon, independent investigations have shown that the majority of cannabis products reaching retail consumers contain some degree of dangerous pesticides.

In short (and in a bit of a roundabout answer to the question ‘is vaping safe‘), it is incredibly difficult to know what’s actually in your cannabis product – regardless of manufacturer claims, fancy looking labels, or even state-mandated regulations.

Vape Pen Safety: It All Comes Down to How They’re Made

In addition to the conundrum of pesticides and thinning agents, the actual manufacturing process itself of cannabis oil (including CBD vape oils and high-potency THC oils), presents a wealth of problems in its own right.

In order to turn raw cannabis flower into a vapable liquid, the plant’s active cannabinoids (namely CBD and THC) have to be extracted. For a while, the almost universal way to do this was to stuff the flower into an air-sealed pipe and run butane (essentially lighter fluid) over it. Via chemical reaction, this extracts the THC to near perfection, leaving the manufacturer with a gooey mess of super high potency cannabis oil.

To turn raw cannabis flower into a vapable liquid, the plant’s active cannabinoids have to be extracted.

However, the problem with this is that – even after multiple “cleaning” steps – dangerous residues of the lighter fluid are oftentimes leftover in the end product. Fortunately, it seems that more and more manufacturers are now switching over to CO2 extraction methods, which seem to be a much safer alternative to butane or hexane.

That said, there is still a large percentage of unsafe marijuana vape pens on the market today that have undergone extraction with harsh chemicals.

Be sure to always read the labels on the product(s) you’re purchasing, and if possible, try and get in touch with the manufacturer to ask them about their specific extraction and oil production methods.

And lastly, another aspect to consider in terms of the safety of cannabis vape pens is something called “concentrated cuticle wax.” Some health experts believe that vapable cannabis oils contain dissolved portions of the plant’s waxy outer layer, which can potentially build up as granules in the lungs upon inhalation of the vapor. This isn’t a problem when weed is smoked traditionally, as smoking burns away the waxy lipid layer. However, vaping doesn’t do this.

A lot of companies have started to remove the wax cuticle prior to extraction of the oil (a process called winterization), but this presents another problem altogether in that the end product oil becomes too viscous. When an oil is too viscous to be vaped, remember, it needs to be treated with a thinning agent. However, then you just end up back at square one in terms of potential health hazards.

The bottom line with all of this is that there’s just simply no real data as of yet on the safety of marijuana vape pens.

Just like cigarettes, it will likely be decades before we fully begin to understand some of the long term effects that vaping has on our bodies. While a lot of these aforementioned chemicals (such as propylene glycol) are common in household products and deemed relatively safe by the FDA, they simply haven’t been studied in terms of direct human inhalation. To put it bluntly, scientists don’t yet know what kind(s) of health concerns they may cause, or be causing. 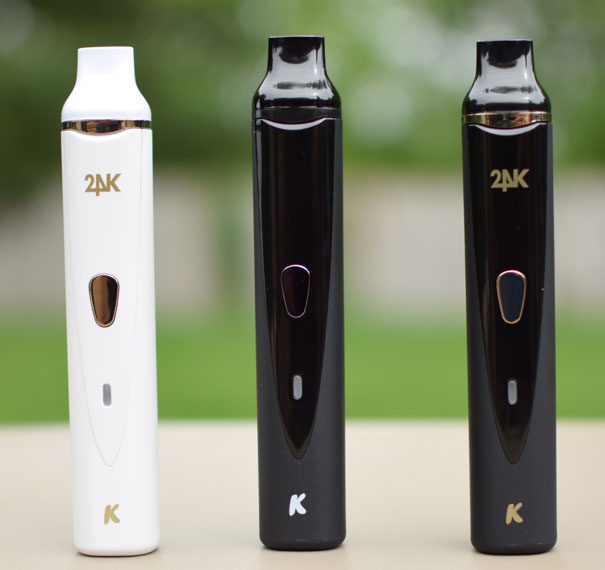 At the end of the day, then, when it comes to the question of whether or not vaping is safe (or whether it’s at least safer than smoking), you’ll find that some studies say yes, and others say no. Until some definitive clinical light starts to be shed on the topic, you as a user will simply have to do your own research and make a responsible judgment call for yourself.

If it’s a decision that’s keeping you awake at night, though, keep in mind that a lot of people have been switching over to oral CBD tinctures instead of vapable oils. These provide all the same high-potency cannabinoids that vape oils do, without any need for inhalation.

The 15 Best and Most Reliable Vapes on the Market

All vapes reviewed in one comprehensive guide

Atmos: A Comprehensive Guide to All Vapes (Review, Price, Comparison)

Top Product Overview Evoxe Labs has created five vape pens for customers, but only the Balance option is pure CBD. The other four options include the Deep, Engage, Stealth, and Balance + - all of which contain trace amount of THC. The Balance vape pen contains 125 mg of CBD, with no THC at all. […]