If you have researched CBD online, you’ll almost certainly have seen it described as ‘non-psychoactive.’ Many people use the term without understanding what it means. Similarly, you will read that THC, the cannabinoid in marijuana that causes an intoxicating high, is psychoactive.

However, the notion that CBD isn’t psychoactive is based on outdated science. The fact it helps define the cannabinoid as distinct from THC is another reason. In this article, we outline the truth behind whether CBD is psychoactive.

The Science of CBD – A Quick Primer

THC’s ability to mimic anandamide is why it provides intoxication. Anandamide, known as the ‘bliss’ molecule, binds to the CB1 receptors in the brain, which is associated with a mood boost. THC binds more tightly to CB1 receptors than the bliss molecule. As a result, it prevents the release of other neurotransmitters, leading to a feeling of euphoria.

CBD’s effect on the CB receptors is significantly milder. It loosely binds with CB1, which ultimately blocks the receptor. CBD is a modulator capable of increasing or decreasing a receptor’s capacity for transmitting signals. Its effects are often likened to a dimmer switch. Researchers believe that CBD’s ability to modulate brain activity is why it helps with symptoms of epilepsy, such as seizures.

CBD could also modulate some of the body’s other receptors. Examples include serotonin, which impacts mood, and opioid receptors, which offer relief from pain. CBD can also reduce the intoxicating effects of THC.

What Does ‘Psychoactive’ Mean & Why Do People Think CBD Is Non-Psychoactive?

A psychoactive chemical acts primarily on the central nervous system and also alters brain function. This leads to a short-term change in mood, behavior, perception, or consciousness.

CBD doesn’t cause intoxication like THC. Moreover, using it won’t lead to clear signs of cognitive changes, nor will you suffer withdrawal symptoms once you stop using it. Even scientific researchers refer to CBD as ‘non-psychoactive.’ This study published in BioMed Research International in 2018 is one example.

However, it is a misnomer. CBD crosses the blood-brain barrier and has a direct effect on the central nervous system. It also causes changes in mood and perception. There is evidence from the countless CBD users who claim they feel calm and relaxed after taking it. A huge percentage of people use the cannabinoid to help relieve pain.

The term ‘intoxication’ usually refers to a state where a person has lost control of their faculties or behavior. In general, it describes the effects of drugs like alcohol, cocaine, and cannabis. CBD doesn’t result in any such loss of control, so saying it is non-intoxicating is technically more accurate.

A psychotropic substance is also something that impacts a person’s mental state, perception of the world, and sense of reality. While CBD could help someone feel less anxious, it doesn’t alter reality. Marijuana potentially does, as do drugs such as psilocybin, LSD, and other hallucinogens.

The term ‘psychoactive’ seems to carry negative connotations, which is why CBD sellers are keen to steer clear. They are only too happy to go along with the myth that cannabidiol isn’t psychoactive.

The idea that CBD is non-psychoactive comes from a reliance on old science. Even today, researchers are still learning more about how CBD impacts human physiology. We know that CBD operates through over 60 different molecular pathways. 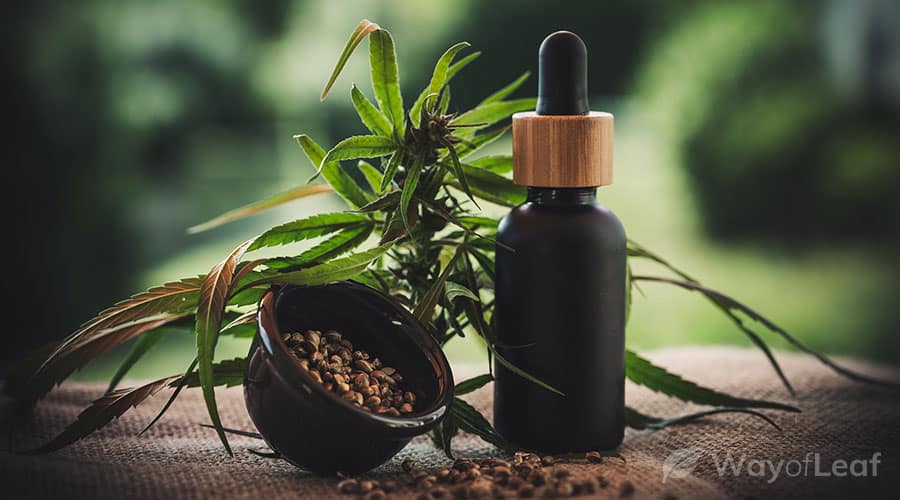 We’re also aware that CBD acts through a variety of receptor-independent channels. The cannabinoid binds to a series of receptors in the brain, including:

CBD doesn’t directly stimulate the CB1, and CB2 receptors like THC does. THC fits into a specific binding site in the CB1 receptor. The ‘lock and key’ description is apt for this process. THC is the molecular key that fits perfectly into the CB1 receptor’s lock.

Researchers discovered the CB1 receptor in 1988. Ever since, researchers see it as a ‘given’ that CBD has little binding affinity for this receptor. However, recent research suggests that CBD does interact with the CB1 receptor. Moreover, it does so in a fashion that makes it therapeutically relevant.

A study published in the British Journal of Pharmacology in 2015 made a fascinating discovery. The researchers found that CBD is a negative allosteric modulator of the CB1 receptor. CBD doesn’t bind directly to the CB1 receptor like THC. However, it interacts allosterically and alters the receptor’s shape in a manner that weakens the CB1 receptors’ ability to bind with THC.

All of the above means that CBD reduces the effects of THC. It is why you probably won’t feel intoxicated after using cannabis with a high CBD content.

There are thousands of studies on CBD now available to read. Researchers have discovered that CBD has antidepressant, antipsychotic, and anxiolytic effects. Therefore, if the cannabinoid can relieve symptoms of anxiety, psychosis, or depression, it does affect the brain and central nervous system.

As a consequence, it is a myth to suggest that CBD is non-psychoactive.

Final Answer to the Question: “Is CBD Non-Psychoactive?”

We can conclusively say that CBD IS psychoactive. A psychoactive substance affects the brain and acts on the central nervous system. It results in a temporary effect on behavior, mood, perception, and consciousness.

An abundance of research clearly illustrates CBD’s moderating effects on depression, anxiety, psychosis, seizures, and pain. While it doesn’t provide an intoxicating or psychotropic effect like THC and other drugs, it is psychoactive. Therefore, it is more accurate to say that CBD is non-intoxicating than non-psychoactive. You could also say it is not psychoactive in the same way as THC.

The British Journal of Pharmacology study is several years old, but the claim that CBD is non-psychoactive remains. It is still mentioned in the medical community! Now that hemp is federally legal, a clear distinction has been drawn between it and marijuana.

Those in the CBD industry will likely try to ensure the same distance appears between its product and THC. Continuing to assert that CBD is non-psychoactive is potentially a useful marketing tool. However, it is also misleading.

The benefits of hemp seed oil

Do I Need a Medical Marijuana Card to Buy CBD Oil?

CBD Nanotechnology: Is It a Real Thing?

How well does the latest CBD trend really work?

10 Unique Ways to Cover the Taste of CBD Oil

18
3 min read
Join The Discussion
TOC
Premium
Your subscription has ended
If you love cannabis and want to support our site, join WayofLeaf Premium today and unlock
Best of all, part of your membership fee will go towards supporting the fight to legalize cannabis.
Sign Up for WoL Premium
Not now
I already have an account
×
Log in to Your Premium Account