The last few years have seen CBD overtake other forms of natural supplements, with it quickly becoming many people’s number one choice. This has resulted in a rise in the quantity of research into CBD and its potential health benefits.

It is generally accepted that cannabidiol is good for the immune system and it is frequently recommended as a natural daily supplement. However, there is still a lot of uncertainty about its ability to help with some of the 21st century’s most problematic health conditions, such as Alzheimer’s disease.

CBD can change how we treat several conditions, including Alzheimer’s disease.

Research into the effects of CBD on Alzheimer’s disease is still ongoing, but it is thought that the cannabinoid could alter the way we manage the condition in the future.

Before we delve into exactly how CBD could help those with Alzheimer’s disease, let’s outline the condition.

What Is Alzheimer’s Disease?

People often confuse Alzheimer’s disease and dementia, using the terms somewhat interchangeably. Dementia is an umbrella term that refers to several different memory-related conditions. It can be caused by a range of factors resulting in a decline in a person’s cognitive function to the point that it affects their ability to carry out normal daily tasks.

The Alzheimer’s Society describes dementia as “A set of symptoms that includes memory loss and difficulties with thinking, problem-solving, or language.” This can occur for several reasons, including damage to the brain due to a lack of oxygen, like when someone has a heart attack. Or it could be the result of a disease such as Alzheimer’s.

In short: dementia is a broader term that refers to cognitive decline, while Alzheimer’s is just one possible cause of dementia.

The brain is a complex system containing billions of nerve cells that connect and communicate with each other. In a brain with Alzheimer’s disease, there is a build-up of proteins known as beta-amyloid and the formation of tangles from a protein called tau. This likely slows down the communication between nerve cells.

When protein builds up in the brain, it forms clusters, also known as plaques and tangles, likely resulting in nerve cells not receiving important chemicals and eventually dying. Chemicals within the brain that allow for signals to pass between nerve cells are drastically reduced in Alzheimer’s patients. This reduces the brain’s ability to function to its full potential.

Alzheimer’s disease is progressive, meaning the effects develop over time due to more cells becoming damaged and dying. Eventually, so many cells are lost that every element of patients’ daily lives is affected. This includes their motor skills, language, ability to process memories, and personality.

Scientists still don’t fully understand the exact cause of Alzheimer’s disease, making it difficult to identify those most at risk and offer preventative treatment. The majority of cases occur in those over the age of 65, although a significant number of people younger than this have some form of early-onset dementia.

Unfortunately, despite extensive research, there isn’t too much that somebody can do to reduce the risk of developing Alzheimer’s disease. Some things the Alzheimer’s Society does recommend that may be beneficial include:

The early signs of Alzheimer’s disease include memory lapses and difficulty learning new information. This is because the hippocampus usually is the first area of the brain that the disease affects.

The hippocampus area of the brain has the largest number of naturally occurring cannabinoids. This fact has led to several studies looking into whether CBD can positively impact the hippocampus and, as a result, Alzheimer’s disease.

Let’s take a closer look at whether CBD has the potential to halt the effect of Alzheimer’s disease.

How Is CBD Thought to Affect Alzheimer’s Disease?

As discussed in various studies, such as this seminal study published in the Journal of Future Medicinal Chemistry in 2010, CBD is known for its anti-inflammatory and antioxidant properties. This basic premise has led to a great deal of research worldwide to discover exactly how CBD works within the brain of someone who has Alzheimer’s disease.

One in vitro study on rat cells, published in the Journal of Neurochemistry in 2004, involved treating the cells with CBD before exposing them to beta-amyloid. The study demonstrated that CBD could have protective effects on the cells. 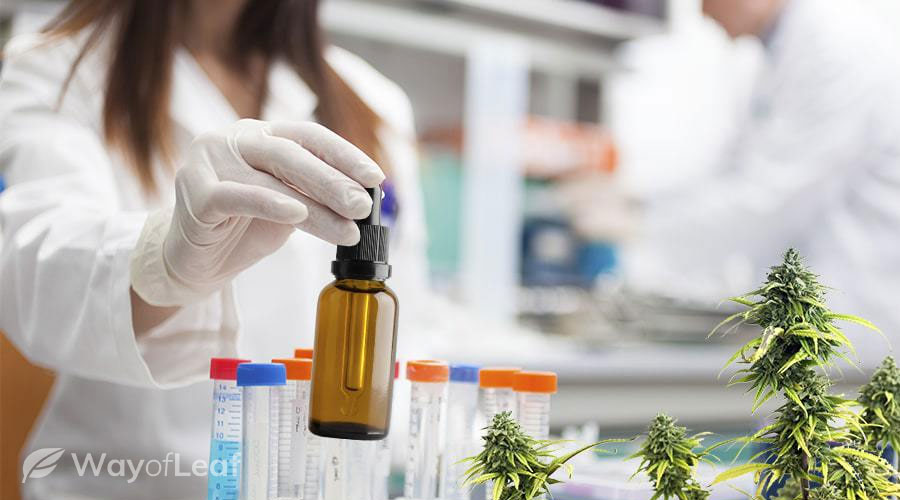 In 2017, a review of studies by Georgia Watt and Tim Karl for the Journal of Frontiers in Pharmacology found that some research supports the idea that CBD can promote the growth of brain cells. When CBD was given in Alzheimer’s disease rodent models, it was able to slow down the decline of memory and cognitive function.

A review of studies published in the Journal of Pharmacopuncture in 2019 looked into the effects of THC and CBD on Alzheimer’s. The researchers suggested that CBD could prove helpful in the treatment and prevention of the condition.

They wrote that CBD components could help suppress certain symptoms, including memory loss and behavior disorders. However, the available evidence suggests that combining CBD and THC is more effective than using THC or CBD alone.

A study published in the Journal of Alzheimer’s Disease in 2021 found that high doses of CBD helped improve cognition and reduce the accumulation of beta-amyloid plaque in an experimental model. 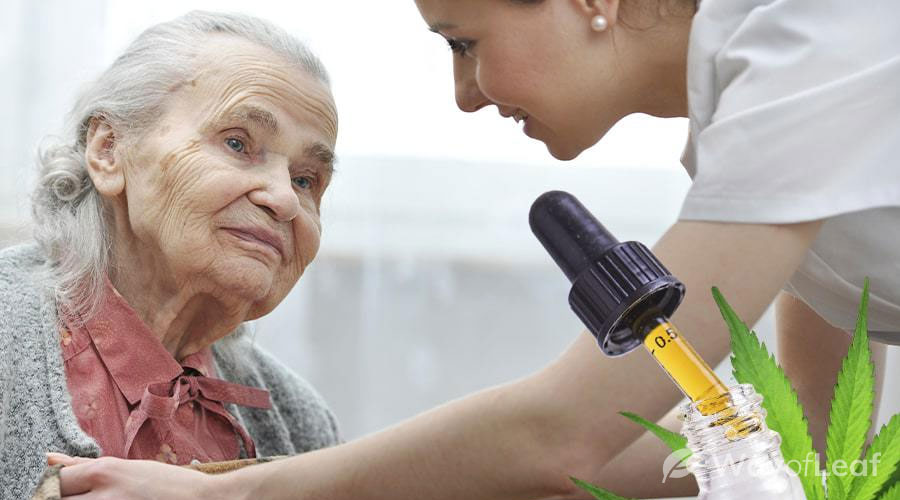 Furthermore, CBD helped increase levels of IL-33 sevenfold and TREM2 tenfold. Both proteins are important as they help the brain’s immune cells consume dead cells and debris, such as the beta-amyloid plaque that builds up in the brains of Alzheimer’s patients. In the brains of people living with Alzheimer’s, the levels of both IL-33 and TREM2 are reduced.

The researchers say that the next steps involve determining the optimal doses to give patients. They also want to discover the impact of giving CBD earlier in the Alzheimer’s disease cycle.

People sometimes use CBD to help with anxiety and stress. These are two conditions commonly seen in Alzheimer’s patients, which are thought to result from the growing lack of understanding and connection with the patients’ surroundings.

While this has no direct impact on how Alzheimer’s disease progresses over time, trying to ease these symptoms can make life feel that little bit easier for a person who has Alzheimer’s-related anxiety.

How Does CBD Compare to Other Medications?

There are many different treatments for a person who has Alzheimer’s disease. While none of them will reverse or completely stop symptoms from progressing, they can slow down the effects of the disease.

However, medication can target specific symptoms of Alzheimer’s disease to make life feel slightly more manageable. This is similar to how someone might take a painkiller to make the effects of a headache feel bearable.

Doctors recommend three main medications for patients in the early to mid-stages of Alzheimer’s disease: donepezil, rivastigmine, and galantamine.

All three of these drugs have slightly different effects and suit different people, but they generally boost chemical messengers in the brain. This results in improved concentration and motivation, as well as aiding the body in processing memories. These drugs can also be useful for patients who suffer from Alzheimer’s-related anxiety.

However, the big question is whether or not CBD can be used to slow down the progression of Alzheimer’s disease in the same way that prescription medication can.

Researchers around the world are continuously working on trying to answer this question. They hope that CBD might provide an answer to what is a growing health concern.

What Type of CBD Oil to Get for Alzheimer’s?

There is no specific type of CBD product that is most suitable for Alzheimer’s patients. The growth of the cannabidiol market means there is a wide range of choices. Popular products include:

Those caring for Alzheimer’s patients might find it easier to administer it in CBD gummy form. However, it is also possible to add CBD oil drops to a patient’s food or drink. One of the advantages of CBD gummies is that the dosage of the cannabinoid is easy to measure. High-quality CBD brands that sell gummies include:

The relative lack of research into CBD oil for Alzheimer’s means it is impossible to provide accurate dosing information. However, we can look at relevant research and investigate the doses used by researchers.

For example, a study published in Medical Cannabis and Cannabinoids in 2019 looked into the effect of an orally consumed medication containing CBD and THC on patients with dementia.

In it, ten patients with dementia consumed the following daily quantities of CBD and THC on average:

The highest daily dosage consumed was 26mg CBD and 13mg THC. Half the patients stopped taking other psychotropic medications or ceased using them altogether during the study. The researchers noted that the patients exhibited fewer behavioral problems and improved rigidity scores. Furthermore, there was no withholding of medication due to side effects.

Does CBD Oil for Alzheimer’s Carry Any Side Effects?

In general, adverse effects associated with CBD are mild. A study published in Cannabis and Cannabinoid Research in 2017 noted side effects including:

There is also the possibility of drug interactions with drug-metabolizing enzymes such as those within the cytochrome P450 family. CBD is metabolized through the CYP3A4 enzyme. Drugs such as ritonavir and itraconazole inhibit this enzyme.

However, research has shown that for most people, CBD will cause minimal or no adverse effects, even at doses of up to 1,500mg a day.

There is still a huge amount of research required into Alzheimer’s disease and its causes. Researchers must also investigate how CBD could help slow progression and alleviate symptoms.

What research has shown, however, is that there are very few reasons to avoid taking CBD, even if just as a supplement. However, anyone looking to use CBD while on other medications should check with a physician to ensure there won’t be negative interactions.

35
7 min read
Video
Join The Discussion
TOC
Premium
Your subscription has ended
If you love cannabis and want to support our site, join WayofLeaf Premium today and unlock
Best of all, part of your membership fee will go towards supporting the fight to legalize cannabis.
Sign Up for WoL Premium
Not now
I already have an account
×
Log in to Your Premium Account