Medically reviewed by Dr. Mike Bohl
Written by Natalie Saunders, B.A., LicAc
6 min read
0 comments
Read Later
All information on this website is for general informational purposes only and is not intended or implied to be a substitute for professional medical advice, diagnosis or treatment.

Obsessive-compulsive disorder, or OCD, is a common mental health condition. Figures from the National Institute of Mental Health suggest that it affects 1.2% of the adult population in the United States.

This anxiety comes hand in hand with uncontrollable thoughts (obsessions) and behaviors (compulsions). These symptoms can significantly impact the sufferer’s life, making it hard to work and maintain healthy relationships.

With limited treatment options, many OCD patients have turned to medical marijuana for relief. But does cannabis help OCD or make it worse? Let’s take a look at the facts.

Most people have experienced obsessive thoughts or compulsive behavior at some point in their lives. For example, going on vacation and panicking about whether they left the gas on, or double-checking that the door is locked, even though they know it is.

However, for people with OCD, these problems can reach a whole new level. Obsessive thoughts and compulsive behaviors become entirely uncontrollable. When this happens, they can begin to take over the person’s life, even though they derive no pleasure from them.

Obsessive thoughts and compulsive behaviors can begin to take over the person’s life, even though they derive no pleasure from them.

Some people experience OCD so severely that their symptoms get in the way of everyday activities. Working or studying becomes more difficult, and interpersonal relationships can be strained.

Of note, obsessive-compulsive disorder is different from obsessive-compulsive personality disorder (OCPD). Oftentimes, people casually use the term OCD when what they are really referring to is OCPD. OCPD is characterized by an excessive need to be a perfectionist and remain neat and organized. This article is specifically about OCD, not OCPD.

The key symptoms of OCD are obsessive thoughts and compulsive behavior. Some common themes that affect people with OCD include:

These thoughts lead to corresponding behavior, such as:

In addition to these critical symptoms of OCD, sufferers are sometimes affected by mood disorders such as anxiety or depression.

Experts believe that OCD arises from a combination of genetic and environmental factors. It appears that the brains of patients with OCD may be structured differently from the brains of people without OCD. These differences include abnormal activity in the frontal cortex and subcortical structures.

Doctors usually recommend a combination of medication and psychotherapy to treat OCD. Some of the most common medications are a class of antidepressants known as selective serotonin reuptake inhibitors (SSRIs).

Like all medicines, SSRIs can cause several side effects. These include:

Thus, many patients may want to avoid taking medication like SSRIs in favor of more natural alternatives like cannabis. But is cannabis a viable option?

There is a growing body of evidence that suggests cannabis could help to relieve anxiety disorders. However, in some cases, cannabis may actually make anxiety worse. But how about OCD?

Cannabis contains numerous active compounds, including THC and CBD. THC is the compound which we associate with getting high. It also has some therapeutic benefits, including relieving pain, relaxing the muscles, and stimulating the appetite.

On the other hand, CBD does not have intoxicating effects but may be useful for various medical conditions. It is a potent anti-inflammatory and also has antioxidant and neuroprotective properties.

THC and CBD exert their effects by interacting with the body’s endocannabinoid system (ECS). This system is responsible for regulating many different physiological and psychological functions. It has a close relationship with several neurotransmitters, including serotonin and dopamine. Therefore, by altering ECS activity, cannabis can dramatically influence our mood and emotions.

It could, therefore, potentially be helpful for some people with OCD. However, the situation is not straightforward.

THC or CBD for OCD?

As already mentioned, THC and CBD have different effects on the body. This is highly significant when it comes to managing OCD with cannabis.

In low doses, THC can have a positive impact on symptoms such as anxiety and depression. However, in higher doses, it has the opposite effect. In some people, it can even trigger episodes of panic and paranoia.

This is a problem when it comes to using cannabis for OCD and anxiety. Nowadays, cannabis breeders seem set on creating strains that pack in as much THC as possible to maximize their potency. Unfortunately, doing this also increases the risk of side effects significantly. 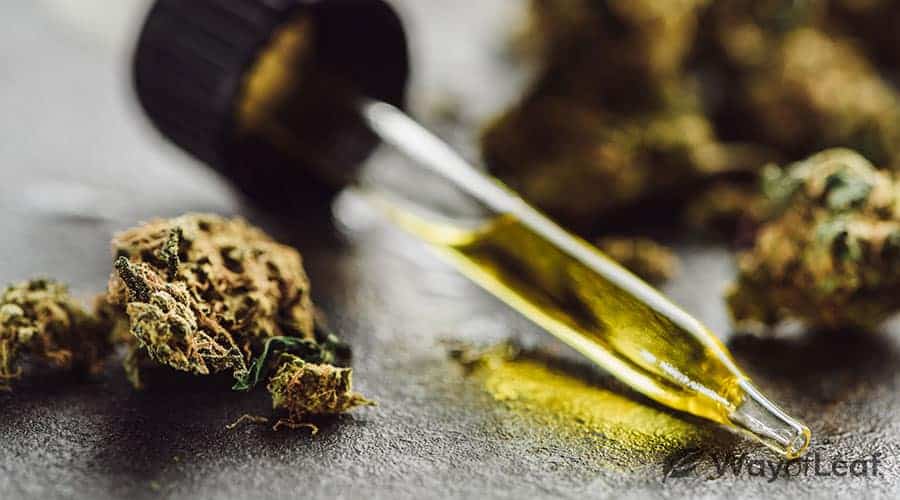 Therefore, people who are prone to feelings of anxiety would be wise to steer clear of these potent, high-THC strains. They may be better off considering CBD instead.

CBD lacks the psychedelic effects of THC. It does not lead to a high and should not increase anxious thoughts and feelings. In fact, there is evidence that CBD counteracts the effects of THC to some extent. It reduces the risk of THC’s side effects and should make for a mellower high.

It is possible to find cannabis strains that have a high CBD content and minimal THC. These high-CBD strains include:

These strains might provide a good compromise for anyone wanting to benefit from cannabis’ anti-anxiety effects without risking overdoing it and making things worse.

Another possibility is CBD oil. This oil is generally extracted from industrial hemp and has a low THC content of 0.3% or less. There are hundreds of CBD oil brands on the market today as people become more aware of its potential benefits.

There is also mounting evidence that CBD is useful for anxiety, possibly more so than traditional cannabis.

Although there are several studies on cannabis and anxiety, there is little research specifically on OCD.

One study on OCD and cannabis appeared in Addictive Behaviors in 2017. It looked at 430 young adult cannabis users who took an online survey assessing various measures of OCD. They also answered questions about their cannabis use, misuse, and motives for using.

The results showed that those who had increased cannabis misuse also had more severe OCD. Specifically, the field of ‘obsessing’ was related to OCD severity. This remained true even after accounting for factors like stress, anxiety, and depression. The authors concluded that patients with OCD symptoms should avoid cannabis due to the risk of developing a cannabis use disorder.

The effects of CBD on the mice were less dramatic than those of the SSRI paroxetine or the benzodiazepine diazepam. However, the results were sustained even after seven days of continuous CBD administration. Diazepam, on the other hand, did not provide such long-lasting benefits.

Another more recent study aimed to assess the effects of cannabis containing different levels of THC and CBD on 14 patients with OCD. Twelve patients completed the study. Researchers found the THC and CBD had little impact on OCD symptoms. They also found that THC and CBD didn’t reduce anxiety as much as placebo.

As of now, there is not enough evidence to suggest that cannabis can manage OCD. In fact, some research shows that cannabis does not have an effect on OCD symptoms.

For those suffering from anxiety, CBD may be effective. THC, on the other hand, may have variable effects on anxiety.

For those suffering from anxiety, CBD may be effective. THC, on the other hand, may have variable effects on anxiety.

If you suffer from OCD, or any other condition, consult your physician before using any form of cannabis. They will discuss whether it is suitable for you and whether it interacts with any medications you are taking. They will also help you to find a safe and effective dosage if they do deem it appropriate.

If you have used cannabis for OCD, we would love to hear from you. Let us know about your experience in the comments below.