Medically reviewed by Dr. Sibin Stephen
Written by Georgia Smith, B.Sc
6 min read
0 comments
Video
Read Later
All information on this website is for general informational purposes only and is not intended or implied to be a substitute for professional medical advice, diagnosis or treatment.

According to the Anxiety and Depression Association of America (ADAA), anxiety disorders affect up to 40 million American adults. Although treatments exist for these disorders, just 37% of people receive any form of remedy. Common anxiety disorders include:

Doctors often prescribe medications such as SSRIs and benzodiazepines. Although clinical trials have demonstrated positive results from these pharmacological interventions, some individuals would rather avoid using prescription medications, especially when some of these medications may have undesirable side effects.

In recent years, cannabis has been cited as a potential treatment for anxiety disorders. Although most people associate any benefits with cannabinoids such as THC and CBD, terpenes have also shown potential.

So, can terpenes be useful for anxiety?

Terpenes: What Are They?

To understand terpenes, let’s take a look at an example. A marijuana strain such as Mango Kush is renowned for its delightful tropical scent. The compounds responsible for this flavor are terpenes. These aromatic organic compounds can enhance the high and may have various medical benefits.

Additionally, terpenes are present in all plant life and some insects. Many scientists theorize that plants evolved terpenes to keep herbivores away while also attracting predators that feast on common plant pests.

Hundreds of terpenes exist, each having unique effects on the human body and mind.

One of the most commonly cited scientific papers for terpenes’ medical benefits was by Ethan Russo. It was published in the British Journal of Pharmacology in August 2011 and found that terpenes and cannabinoids work together to modulate and boost one another’s effects in the endocannabinoid system (ECS).

The ‘entourage effect’ refers to the theory that compounds found in cannabis work better together than in isolation.

Hundreds of terpenes exist, each having unique effects on the human body and mind. For instance, some believe myrcene can increase the effects of THC, resulting in anti-inflammatory and analgesic (pain relief) effects, as well as sleep induction. According to Russo’s paper, the difference between a sedated high and an energetic one is mainly due to the strain’s terpenes, rather than whether it is an indica or a sativa.

We can’t narrow down the answer to the title question to one single terpene. There are well over a hundred terpenes in the average marijuana strain, so it is effectively impossible to determine the single best one for anxiety, or any medical condition for that matter. The truth is, we have barely scratched the surface in terms of terpene research. 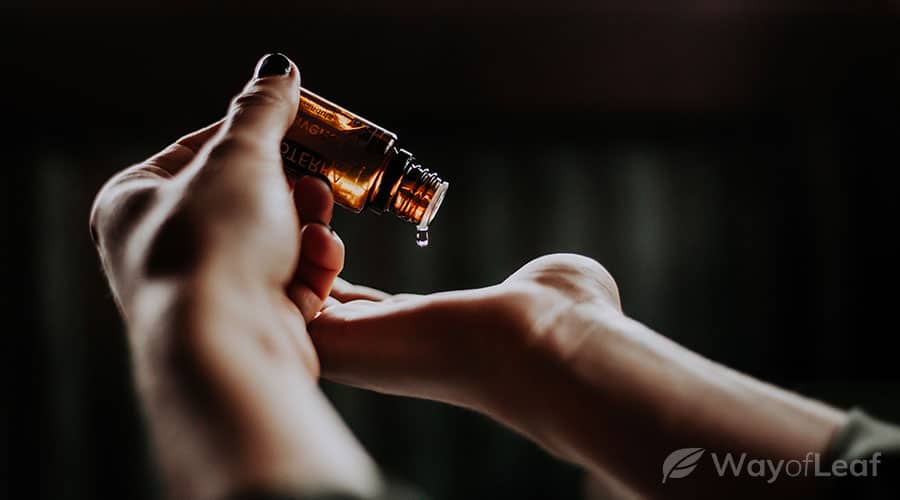 What we do know is that essential oils have been a major part of holistic medicine for millennia. This fact is significant because terpenes typically comprise up to 80% of an essential oil’s content.

Another important note is that when smoked, the terpenes and cannabinoids in marijuana are often destroyed through the high-heats of combustion. Vaping weed is more likely to provide the effect users are looking for.

In any case, here is a shortlist of terpenes with the potential to help anxiety.

Myrcene: This monoterpene is called beta-myrcene and is the most abundant terpene in cannabis. In liquid form, it is yellow and oily. Some believe that myrcene provides sedative and anti-inflammatory effects.

Limonene: This terpene is common in citrus fruits, which means it may be abundant in any strain with an orange or lemon scent. It is the second most common terpene in cannabis; research suggests that it may help relieve anxiety and depression, fight bacterial infections, and address ulcers.

Beta-Caryophyllene This terpene is known for its black pepper scent and serves as a CB2 receptor agonist. A 2014 study by Bahi et al., published in the Physiology & Behavior journal, found that beta-caryophyllene reduced the anxiety levels in rodents forced to go through maze puzzles. It is a terpene that works particularly well with CBD and is present in hops, black pepper, and rosemary essential oils.

Linalool: Linalool is a popular addition to perfume due to its floral scent. It’s a compound found in many plants such as lavender, jasmine, and basil. A study by Linck et al., published in the July 2010 edition of Phytomedicine, found that linalool decreased aggressive behavior in mice.

Alpha-Pinene: Many find this compound in pine trees and other coniferous plants. It is believed to help reduce inflammation, kill bacteria, increase cognitive function, and reduce anxiety. Although, like all terpenes, research is still on-going.

What Terpenes Are Bad for Anxiety?

Terpenes can provide significant therapeutic benefits, but can they actually increase anxiety? The truth is, we simply don’t have enough data to answer the question directly.

One 2018 study, published in Frontiers of Neuroscience, investigated the link between anxiety and particular terpenes. Using a survey, they asked participants to choose the most and least effective strains for improving their anxiety.

After this, researchers grouped each strain into three categories based on their terpene profile. Interestingly, kush strains ranked as the most effective three out of four times.

Variations in metabolism, tolerance, history of mental illness, and medication can have an impact on the effect.

Researchers then took a closer look at the least-effective strains to see if there was a correlation in terpene content. From the results, they noted that some terpenes, like guaiol, appeared regularly in the least favored strains. 15% of respondents also experienced an increase in anxiety.

Unfortunately, this study is far from conclusive. Researchers noted limitations based on participants’ self-reporting and because they didn’t consider external influences on anxiety.

In reality, users can respond very differently to the same strain. Often variations in metabolism, tolerance, history of mental illness, and medication can have an impact on the effect.

Because of this, it’s challenging to determine what, if any, terpenes are bad for anxiety.

Which Marijuana Strains Should I Choose for Anxiety?

Now that we know some of the best terpenes for anxiety, it becomes far easier to determine the right cannabis strains. 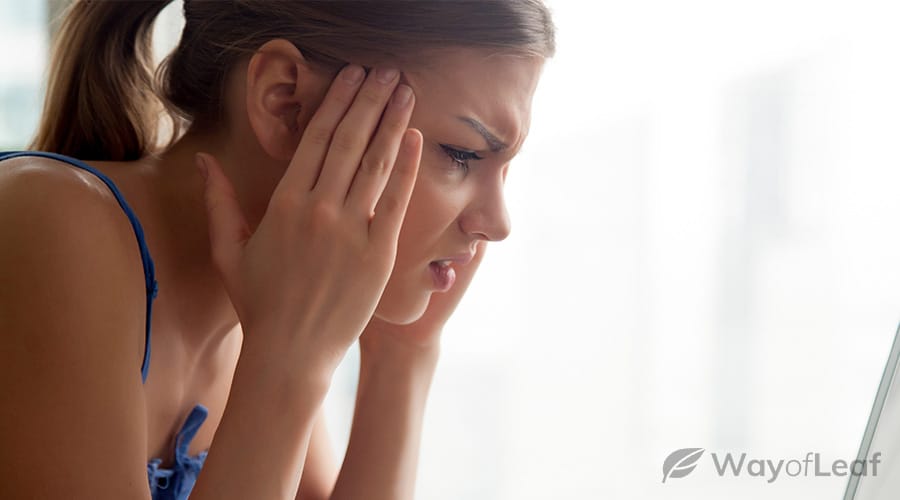 However, it’s important to know that these strains are simply recommendations; there is no clinical data that suggests that they can cure or treat any specific anxiety disorders. 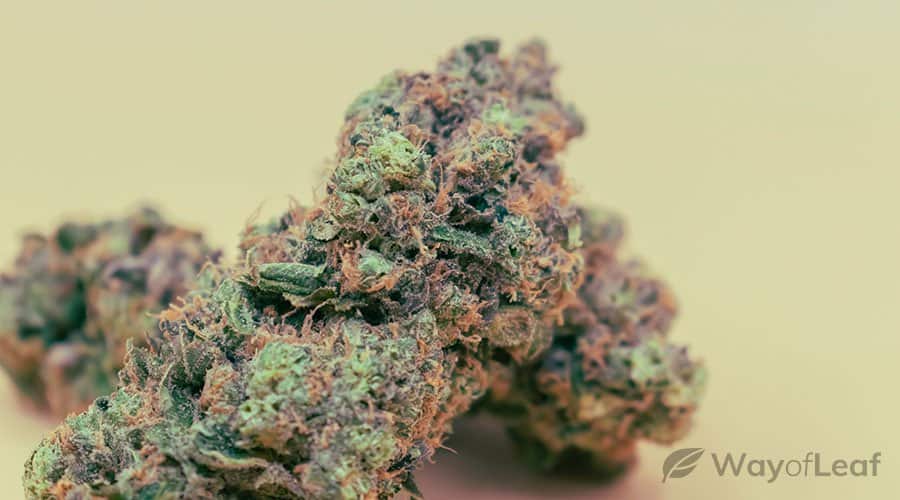 Harlequin is widely regarded as one of the best medicinal marijuana strains on the planet. It typically has a CBD:THC ratio of 5:2 and contains a significant amount of myrcene, along with some beta-caryophyllene and alpha-pinene. 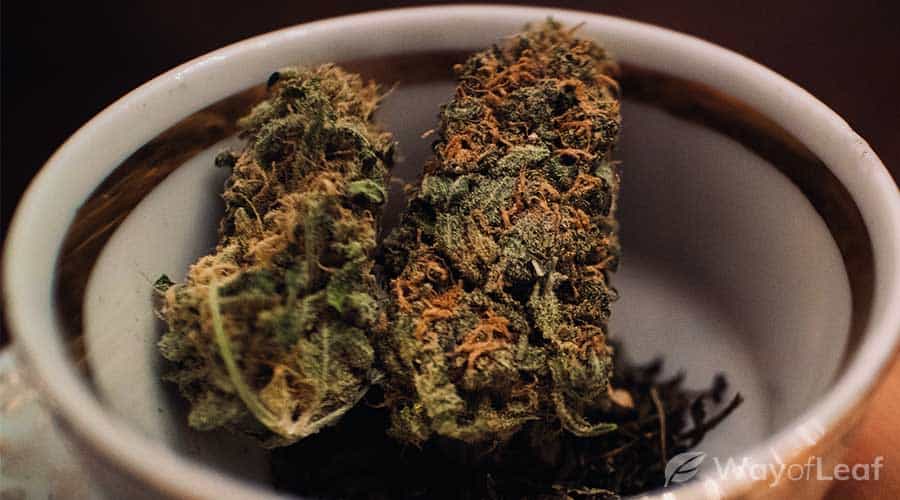 This is another high-CBD strain, which means users can relax without a powerful psychoactive high. Cannatonic is rich in myrcene and also contains linalool, limonene, beta-caryophyllene, and alpha-pinene. 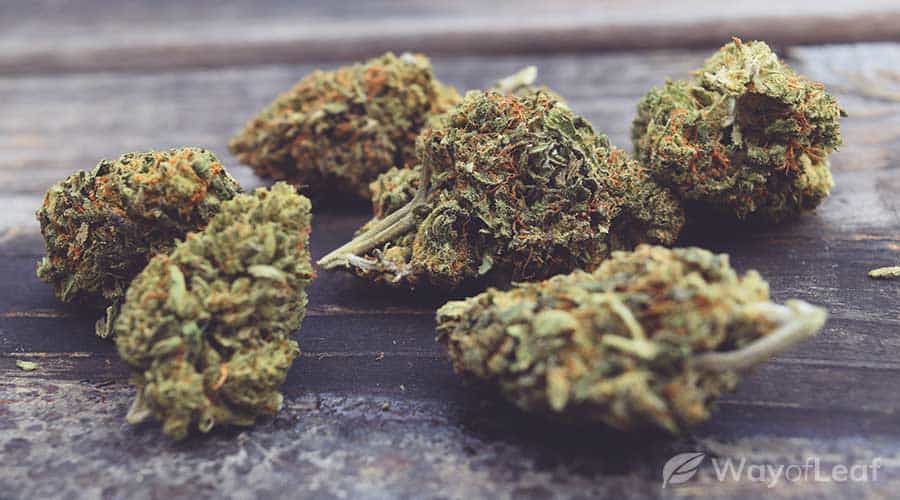 This is a delicious strain that smells as good as it tastes. It is loaded with beta-caryophyllene and myrcene and contains humulene with a little bit of limonene. Users say that this strain relaxes them and gives them a craving for a slice of blueberry cheesecake! 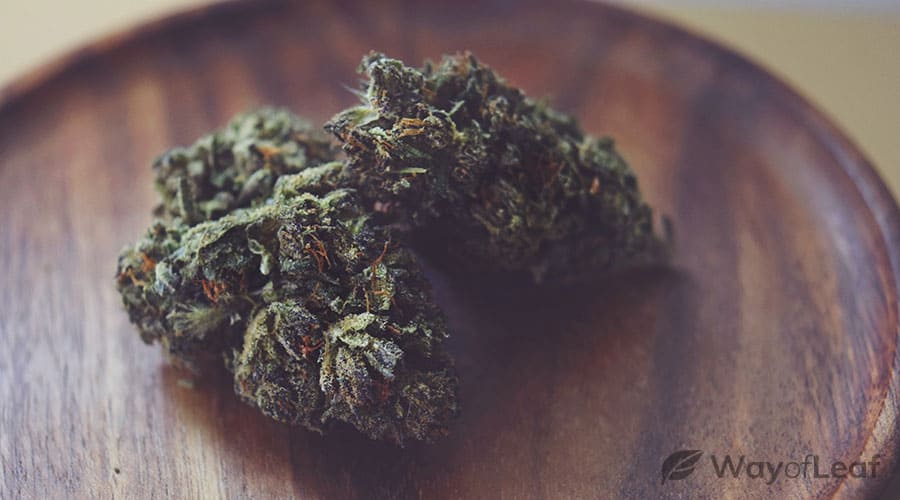 This is yet another popular high-CBD strain that is ideal for those who need a stress buster. Some users also claim that Remedy is an effective analgesic due to its anti-inflammatory properties. It is filled with myrcene, alpha-pinene, and beta-caryophyllene. 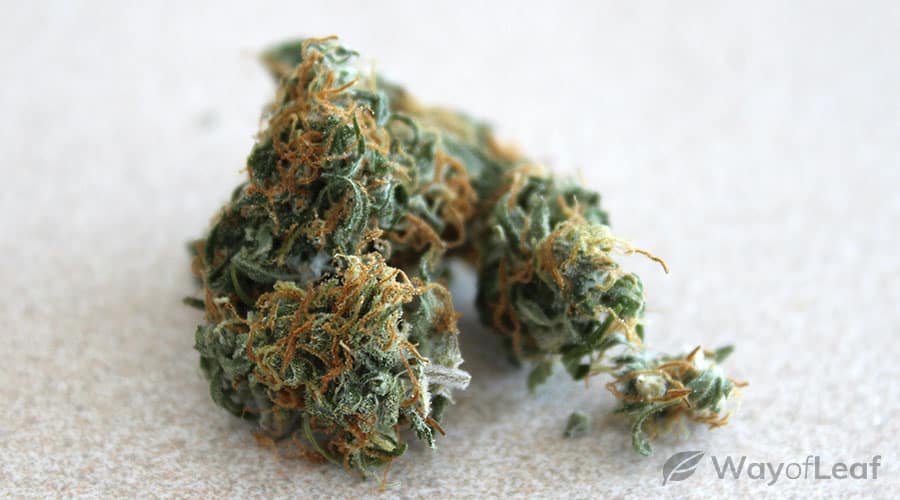 Unlike other strains on this list, Bubba Kush allows users to get high because it has a THC content of 22%. Users tend to experience an uplighting high that melts stresses away. It includes large amounts of myrcene, beta-caryophyllene, and limonene, along with linalool, alpha-pinene, and a host of other terpenes. 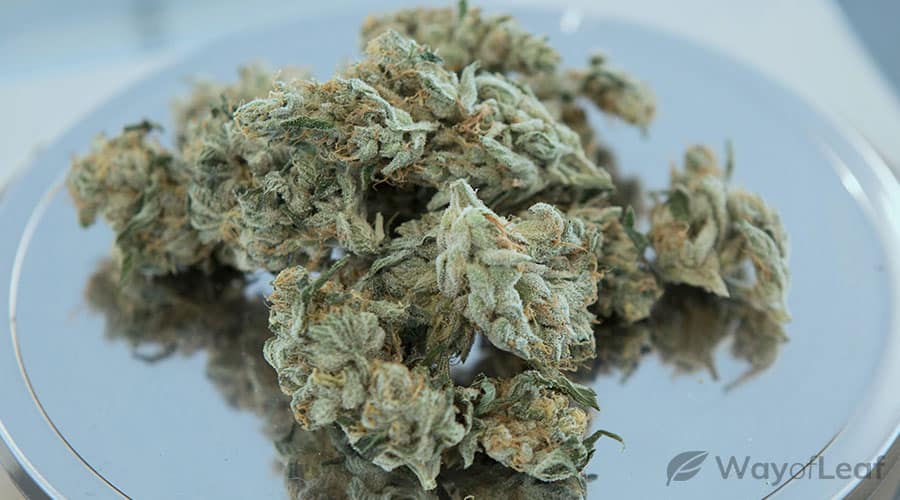 White Widow is a popular marijuana strain bred in the Netherlands by Green House Seeds. It was brought to the United States from the Amsterdam coffee shops, and it is a strain known for causing euphoria and eliminating stressful thoughts. It contains large amounts of myrcene, beta-caryophyllene, limonene, and alpha-pinene.

Aside from smoking strains, there are other ways to reap the potential benefits of terpenes. Some of the most popular methods are:

Vaping, in particular, has proved a favorite with users. As mentioned before, terpenes are easily damaged at temperatures above 300 degrees Fahrenheit (148.9 degrees Celsius). Using a vape device allows users to regulate temperature, ensuring that all the terpenes survive.

The market is full of CBD products that are rich in terpenes and contain minimal THC.

Additionally, some people may be curious about using terpenes for anxiety but don’t want to experience any intoxicating effects. Luckily, the market is full of CBD products that are rich in terpenes and contain minimal THC.

For a broad blend of terpenes, full-spectrum CBD oils are ideal. However, terpene-specific oils are also available for those wanting one particular flavor or effect. Just make sure to check the product details in the description.

What Terpenes Are Good for Anxiety? Final Thoughts

Hopefully, those wanting to reduce anxiety can find relief from one of the marijuana strains mentioned above. Although we have mentioned only five terpenes above, many more may help users relax and de-stress.

Essential oils have long been linked with relaxation, with various clinical trials illustrating positive results. However, to what extent they can help with anxiety and stress remains largely unknown.

Additionally, it’s essential to understand that each individual’s body chemistry can vary. What works for one user may not necessarily work for the next individual. As scientific knowledge delves deeper into its properties, hopefully, one day, we will fully understand what terpenes are good for anxiety.

Stresses and Anxiety
Table of Contents