Written by John Killerlane, B.A., HDip
7 min read
2 comments
Read Later
All information on this website is for general informational purposes only and is not intended or implied to be a substitute for professional medical advice, diagnosis or treatment.

Concussions are a lot more common in the United States than most people realize. According to the Centers for Disease Control, well over 1 million Americans suffer from a diagnosed event each year.

Millions more suffer from undiagnosed events. Tens of thousands of these patients are children aged 5 to 18. Studies have shown that early-age concussions can lead to an increased dependence on drugs and alcohol later in life.

What Is a Concussion?

To understand how marijuana helps the brain recovery process after concussion, we first have to understand what a concussion is. Then, we need to identify what its immediate and long-term effects are.

According to the National Institute on Drug Abuse, a concussion takes place when the brain “bumps” the skull after a significant impact to the head.

Symptoms of a concussion include:

DID YOU KNOW: The majority of concussion-related hospital visits are the result of sports injuries or car accidents?

Every concussion – even mild ones – are classified as a traumatic brain injury or TBI. Whenever the brain gets injured, it releases compounds called glutamates. This results in the build-up of calcium over time, as well as neurological cell degeneration. The antioxidative properties of cannabis may be able to help prevent this cell degeneration and its long-term effects.

When speaking of TBI, it’s important to understand that a spectrum exists relating to the severity of brain-related injuries. Most TBI cases (up to 80%) fall under the mild spectrum, which includes concussions (often referred to as ‘mild TBI’).

The Dangers of Concussions

The real danger of concussions lies in what’s known as ‘concussion plus’; this is aside from the temporary headaches and nausea that it produces.

This term, coined by Dr. Gillian Hotz, describes the long-term impact of concussion, as well as its debilitating (and sometimes even fatal) effects.

Calcium buildup and damage to brain cells can result in a variety of long-term psychological conditions. These include early-onset dementia and chronic traumatic encephalopathy (CTE) – both of which can be deadly.

The prevalence of long-term concussion side effects among former NFL players has been well-documented in recent years. The TBI-related deaths of Pittsburgh Steelers Lineman Ralph Wenzel and Philadelphia Eagles fullback Kevin Turner highlight the dangers associated with suffering a traumatic brain injury.

But is there anything doctors can do to prevent the long-term impacts of concussions, or to reduce the prevalence of related onset conditions like dementia or CTE?

Concussions: How Are They Typically Treated? 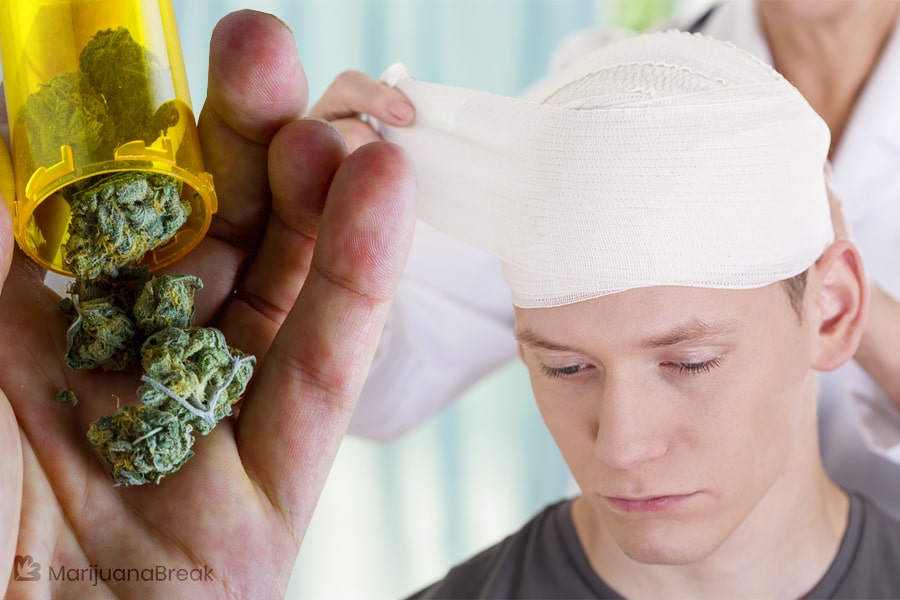 The biomechanical impact that takes place when the brain comes into contact with the skull produces headaches, dizziness, and nausea. These symptoms typically persist for 8-12 days. The only real “treatment” is rest, as well as the administration of mild OTC analgesics like Tylenol and ibuprofen.

However, repeat concussions over an extended period can result in very serious long-term conditions.

In a 2015 study, researchers from Boston University observed that 96% of former NFL players showed early symptoms of CTE.

The scary thing about CTE is the fact that it is a progressive brain disease. This means that it inherently gets worse over time with no known treatment. Some of CTE’s long-term symptoms include depression, aggressive behavior, memory loss, impaired judgment, loss of motor function, suicidal thoughts, and dementia.

Adequate treatment of concussion is something that clinical researchers have been taking very seriously in recent years. The active chemical compounds within marijuana may be a viable option in terms of limiting long-term brain cell deterioration.

Marijuana for Concussion: What You Need to Know 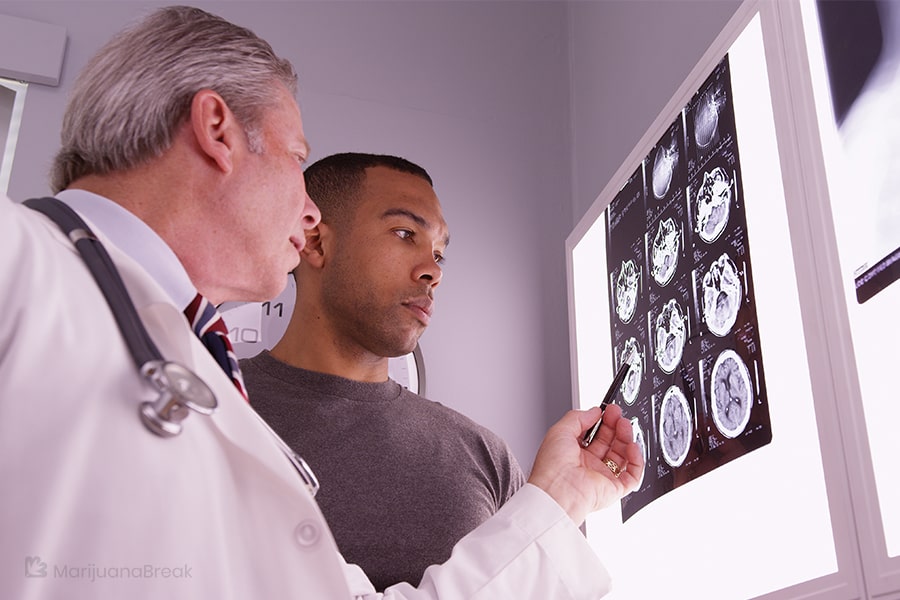 If you are considering consuming cannabis with a concussion, then it is extremely important that you consult your medical professional beforehand. We are not medical professionals. The information contained in this article is for educational purposes only.

Cannabidiol (CBD) and tetrahydrocannabinol (THC) are two of the most studies phytocannabinoids. The use of these cannabinoids in the treatment for TBI and concussion is the subject of ongoing research. So far, it appears that these cannabinoids may be able to help alleviate some of the symptoms of a TBI and post-concussion syndrome.

Some ways that they can do so is by providing an anti-inflammatory response, helping to reduce pain, mitigating hypotension in the brain, as well as helping to control seizures. The use of CBD for concussion is being taken very seriously by some of the top doctors, psychiatrists, and neurological researchers in the world.

In 2016, researchers from the University of Miami were awarded a $16 million grant to try and develop a patented “cannabis pill” that individuals could take after suffering a concussion (or other forms of TBI).

The goal of the 5-year clinical investigation (which is currently ongoing and led by University of Miami’s Dr. Michael Hoffer), is to create a CBD-based medicine that would “disrupt the series of chemical reactions that follow a concussion and lead to brain-cell death.”

Understanding CBD and Its Relationship to Concussions

CBD – short for cannabidiol – is a natural cannabis extract that unlike THC, does not get users high. For obvious reasons, it is being regarded as the preferred compound of choice in many instances of therapeutic marijuana use.

The five-year-long study involves a multidisciplinary team who will examine the effects of combining CBD with an NMDA antagonist (anesthetic) in the treatment of TBI and concussion. The hope is that the combination of CBD and the NMDA antagonist will be successful in reducing post-injury related symptoms.

The findings from the pre-clinical pre-study were recently released, and the results so far have been very encouraging. The researchers found that the combination therapy resulted in improved cognitive functions in animals when compared with animals which received only CBD or the NMDA antagonist. Further encouragement was drawn from the fact that neither the combination therapy nor the individual components produced any adverse reactions.

Helen M. Bramlett, a professor of neurological surgery, and a member of the multidisciplinary team involved in the research says:

“These findings, which represent the initial results from our TBI study using this novel combination therapy, merit further investigation in other pre-clinical models of brain injury, including concussion.

Robert Reid, the CEO of Scythian Biosciences, which is the company funding the research, says that he is “encouraged by the initial findings of the study. We are just beginning to tap the potential healing power of medicinal cannabis and (are) exploring its growing number of benefits.”

The second phase of the study will involve a small human pilot study. It will likely involve the administering of the compounds in pill form to a control group as well as to two groups of TBI patients. One suffering from an acute TBI, and the other with a chronic TBI.

The researchers will use nine different outcome fields to determine the efficacy of the treatment. These are: cognitive, behavioral, psychosocial, sleep, pain, sensorimotor, cardiovascular, inflammatory biomarkers, and neuroimaging studies.

Upon completion of the study, the data from the nine outcome fields will be analyzed. Additionally, any safety concerns will also be addressed. If the treatment is deemed safe and effective, then the third phase of research will begin.

This will involve a full-scale clinical trial with FDA oversight over a three-year period. Furthermore, by the end of the clinical trial, researchers will better know whether or not the compound is an effective treatment for TBI and concussion.

Results of the clinical investigation will not be out for several years. However, early signs have indeed been promising, with Dr. Hoffer claiming that “if we can stabilize those [brain cells at risk], we can prevent the dominos [of onset CTE] from falling.”

“What that pill would do is stabilize the brain, so that when you get a head injury, there may only be a few brain cells that are injured to the point of no return.”

In one 2017 study, Schurman and Lichtman determined that endocannabinoids represent “important areas of basic research and potential therapeutic interest to treating TBI [including concussion].”

The researchers also noted that “phytocannabinoids represent an understudied yet promising group of compounds given the neuroprotective results obtained from other types of CNS injury.”

Shurman and Lichtman believe that “CBD as well as other phytocannabinoids which do not bind cannabinoid receptors, represent promising molecules to treat TBI.”

Another study, entitled, “Effect of Marijuana use on outcomes in traumatic brain injury” was published in 2014 in The American Surgeon. Interestingly, the researchers based at the Harbor-UCLA Medical Center in California found that “a positive THC screen is associated with decreased mortality in adult patients sustaining (a) TBI.”

The researchers also say that while cannabis won’t save the life of someone suffering a catastrophic injury; it “does seem to protect the brain in people who have lived through a TBI.”

Final Thoughts on Marijuana for Concussion

It is clear, as Gillian A. Hotz, Ph.D., professor of neurological surgery, puts it, that “there needs to be more systematic research in this field in order to study the neuroprotective properties of CBD, and to improve treatment for those sustaining mild-to-moderate TBI (traumatic brain injury) and concussion.”

Holtz and colleagues are carrying out research in relation to the effectiveness of treatment for TBI and concussions. This involves a combination of CBD and an NMDA antagonist, is a particularly significant and important area of current research. For now, though, the jury is still out on that one. So far, the initial preclinical findings have been very encouraging.

Again, as already mentioned, if you have suffered a concussion or TBI, and are considering consuming cannabis, it is important to speak with your medical professional before doing so.