Written by Editorial Team
6 min read
2 comments
Read Later
All information on this website is for general informational purposes only and is not intended or implied to be a substitute for professional medical advice, diagnosis or treatment.

Bipolar disorder is a chemical imbalance in the brain. It can cause wild, unpredictable mood changes and sudden, rapid shifts in behavior, often over the most minute of details.

Typically, individuals will experience the complete human emotive spectrum. This includes the low depressive episodes and the euphoric, manic highs. These incidents happen in very short periods, often within the same day or even the same hour.

Doctors and researchers attribute many of the symptoms of bipolar disorder to irregularities in the presence of neurotransmitters like dopamine, norepinephrine, and serotonin. However, they are not sure what exactly triggers the condition. They also don’t know why some people are prone to it, and others are not.

Cannabis is potentially helpful for bipolar disorder and has assisted thousands of individuals. It could provide aid in terms of acute treatment for onset episodes and long-term preventative care.

In this article, we talk about marijuana for bipolar disorder. We look at some intriguing research, and clinical data, which suggests using weed has merit if you have bipolar disorder. However, the condition is not curable at present, so don’t expect cannabis to do anything more than potentially provide some relief.

What Is Bipolar Disorder, and Who Is Most at Risk?

Bipolar disorder is more prevalent than many people realize. It affects up to 5.7 million adult Americans alone and up to 46 million worldwide. Experts believe that twice as many live with the condition without ever receiving a diagnosis. 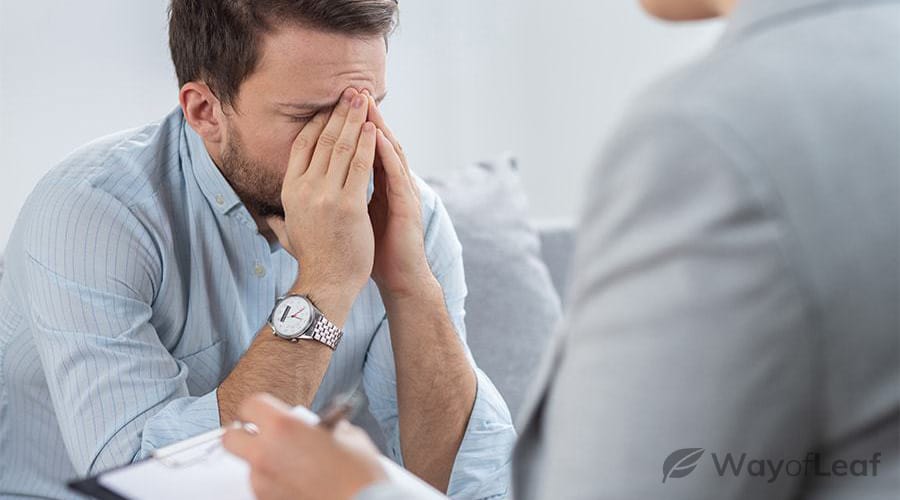 The occurrence of three main symptoms registers bipolar. All of them can occur suddenly, and seemingly without cause in the individual. The three signs are mania, hypomania, and depression.

Many holistically-minded doctors will do all they can to treat bipolar patients with lifestyle changes. Things like dietary alterations increased exercise, and alcohol abstinence are attempted. Only then will these physicians place patients on prescription medications.

Medical doctors are more likely to prescribe potent pharmaceutical drugs for treatment than osteopathic physicians. While generally useful in the short-term, these medications are incredibly habit-forming. They also present an array of serious side effects, some of which include manic depression and suicidal thoughts.

Lithobid, for example, is a lithium-based drug that belongs to a class of chemical mood stabilizers. It is frequently prescribed for chronic sufferers of bipolar disorder but is associated with an array of side effects. Users often cite their concerns over using lithium. After all, an effective and toxic dose isn’t all that different! An individual with bipolar disorder is at risk of doubling up a dose after missing one.

Likewise, Symbyax is another relatively common bipolar medication. It is a combination of two types of drugs: olanzapine (which is an antipsychotic) and fluoxetine (a selective serotonin reuptake inhibitor, or SSRI). Common side effects of Symbyax include:

Benzodiazepines like Xanax, Valium, and Klonopin are also used for bipolar disorder. This is despite well-documented adverse effects such as:

It is little wonder that many are now turning to marijuana for bipolar disorder.

Marijuana for Bipolar Disorder Treatment: Will it Work For You?

Among the primary draws for marijuana are fewer side effects and lower risk of addiction compared to pharmaceutical drugs. This is the case, regardless of why you use medicinal cannabis.

For many individuals, marijuana is far more affordable and less cost-prohibitive than prescription medication. This is especially the case for those who do not have health insurance. Prescription drugs can cost hundreds, if not thousands, of dollars per month.

Numerous bipolar patients have taken to social media forums such as Reddit to discuss the benefits of MMJ. Many of them claim that cannabis offers more relief from their symptoms with fewer side effects than lithium. It seems as if indica-dominant hybrids are more commonly used when in need of rest. Meanwhile, individuals seeking an energy boost often try sativa-dominant strains.

However, not everyone who uses marijuana for bipolar disorder experiences positive results. For some, it seems to exacerbate their psychotic episodes.

Therefore, it is probably a good idea to avoid high-THC strains, at least if you are concerned about triggering psychotic episodes. Depending on where you live, bipolar disorder is potentially a qualifying medical condition. Make sure you speak to your physician before considering cannabis use for any medical issue.

What Does the Research Say Regarding Cannabis and Bipolar Disorder?

Marijuana is by far the most prevalent drug used by people living with bipolar disorder. Up to 70% of patients used cannabis, but 30% developed comorbidity of abuse or dependence on the drug. Nonetheless, bipolar patients continue to use it because they feel as if marijuana ‘slows down’ their racing mind. Also, it has potential anxiety-relieving effects.

A study by Sagar et al., published in PLOS One in June 2016, examined cannabis use amongst bipolar patients. The pilot study investigated the impact of the disorder and weed on cognitive function and mood. Researchers found that individuals with the condition don’t experience significant mental impairment compared to patients who didn’t use cannabis.

Another study published in PLOS One, this time by Tyler et al. in March 2015, also found positivity from using MMJ with bipolar disorder. The team found that cannabis use in some bipolar patients improved mood and led to a more positive outlook. Alas, researchers found that the subjects were more likely to use MMJ when they were already in a good mood.

Unfortunately, there is plenty of research that suggests possible harm when using MMJ for bipolar. A study by Gibbs et al., published in the Journal of Affective Disorders in January 2015, had bad news. It reviewed a group of studies and found that using MMJ with bipolar could increase the severity of manic symptoms.

A study by Leite et al., published in Neural Plasticity, in 2015, also provided a dire warning. The researchers found that marijuana use could increase suicide risk in bipolar patients. Research is limited, though what is available may make people with bipolar think twice about using cannabis.

How to Use Marijuana for Bipolar Disorder

Identifying marijuana for bipolar disorder as a viable treatment option is one thing. Buying it and knowing how to use it is another thing altogether. If you live in a state where weed is legal, you could get your MMJ card online. In 11 states plus D.C., you can go to a recreational dispensary.

However, if you live in a non-legal state, you may need to buy CBD hemp oil online. The less than ideal alternative is to use the black market. We don’t advise this for many reasons.

Here are several of the most common ways to use marijuana for bipolar disorder, once you legally acquire it.

This is the simplest, most common, and most time-proven way to consume weed. Some say it is the most effective.

If you are really against smoking weed, CBD oil is a viable option. It has become prevalent in recent years among people of all ages.  Individuals use it for a variety of medical issues, including bipolar disorder.

CBD oil is non-intoxicating, which means it produces no high whatsoever. It is a naturally-occurring compound in the plant-like THC. However, it does not directly bind to receptors in the brain and, therefore, does not alter your mental acuity. CBD oil from industrial hemp is now legal in many American states.

Are you concerned about the obvious respiratory effects of smoking? Perhaps you have lung issues that may prevent you from toking on a joint. If so, you have the option of vaporizing marijuana for bipolar disorder.

Vaping lets you inhale weed at significantly lower temperatures than smoking. The lack of combustion means it does not give off nearly the same amount of harmful and potentially dangerous toxins. Finding affordable starter vape pen kits is also extremely easy online.

Last but not least is perhaps the tastiest way to use marijuana for bipolar disorder — edibles. You can get edibles with either THC or CBD cannabis strains, depending on whether or not you want to feel ‘high.’

Some say that edibles are much more potent than virtually any other form of marijuana consumption. Therefore, we recommend starting with something milder like an oil or tincture. When consuming an edible, take a small amount and wait for up to two hours before using more.

Remember, marijuana is not a ‘cure’ for bipolar disorder. Indeed, there is no cure for either BP-I or BP-II. They are very complex conditions, and doctors and researchers continue to look for answers.

It is important to realize that cannabis won’t work for everyone’s specific bipolar condition. However, it has undoubtedly helped thousands of suffering patients.

However, it has also led to increased bouts of paranoia and psychotic episodes in many others. There is even an enhanced risk of suicidal thoughts and actions, according to some studies.

Discuss possible marijuana use with a licensed medical professional. If you use weed, go low and start slow!