In 2018, the CDC published a report that showcased a concerning rise in vaping amongst adolescents and young people – primarily due to increased use of nicotine-containing e-cigarettes.

It is a scary notion in and of itself, but the prospect of increased vape use among young people is even more concerning, considering how little we know about vaping and its effects on the lungs.

While we have decades worth of research on tobacco-smoking-related illness, we have virtually no data on what vaping does to the lungs over the long term.

Is Vaping Weed Bad for Your Lungs?

If you’re asking yourself the question ‘are vapes bad for your lungs,’ consider the news story of an Erie, Pennsylvania, teenager that was admitted to the hospital back in 2019 with severe respiratory illness from heavy vape use.

After scans, doctors observed that a “hardened oil” had solidified throughout the teenager’s lungs, which they noted resembled those of a “60-year old who smokes forty cigarettes per day.”

Many incidents worldwide have made experts question whether vaping should carry health warnings.

This case is just one instance of many worldwide that have made experts question whether vaping should carry health warnings in the same way as tobacco cigarettes.

Indeed, several state and even some federal government agencies have already imposed restrictions on vaping. In September 2019, New York became the first state to ban flavored e-cigarettes on the grounds of potential lung injury associated with vaping.

Does Vaping Crystallize Your Lungs?

Based on the above-cited national news story and other similar stories that have surfaced in recent years, many unsubstantiated claims have been fabricated recently. These include the widespread (albeit invalid) idea that vaping fills your lungs with water and/or crystallizes lung tissue.

While vaping is certainly not without its risks, individuals must distinguish between valid scientific data and the alarming rise of false information in places like online forums and discussions.

Does Vapor Condense in Your Lungs?

This is another question that has been popping up more and more recently in online searches. Again, doctors and scientists know very little regarding the anecdotal suggestion that inhaled vapor can condense in the lungs.

The word condense means to change in physical state from a gas to a liquid, so “condensing in the lungs” would suggest that, after inhalation, a vape cloud transforms from a gaseous state to a liquid one, thereby saturating respiratory tissue with fluid and producing a condition known as “wet lung.”

Again, however, unlike popcorn lung from vaping weed (which does have scientific merit as outlined later in the article), little to no research exists on the prospect of condensation occurring in the lungs from inhaled vapor.

The following section highlights what we know – based on scientific research – about the effects vaping can have on lung tissue and general respiratory health.

Is Vaping Bad for Your Lungs? This Is What Science Is Saying

A 2019 study in the academic journal Respirology found that vapor from e-cigarettes can damage bronchial epithelial cells that line the respiratory airways. These cells are crucial for healthy lung functioning, and researchers noted that e-cig devices should be “treated with caution by users, especially those who are non-smokers.”

They also noted the potential for e-cigarette vapor to interfere with the immune system via disruption of white blood cells that digest and store foreign debris.

Guess which one causes more da…

Another study, published in the Journal of the American College of Cardiology, found that e-cigarette products can damage cells that line the blood vessels, resulting in an increased risk of heart disease.

A separate 2018 study published in the American Journal of Preventive Medicine also notes an association between daily e-cigarette use and increased risk of myocardial infarction (heart attack).

Lastly, a 2020 study published in the American Journal of Preventive Medicine observed potential relationships between e-cigarette use and lung health and found that vaping is indeed an “independent risk factor for respiratory disease.” The study also noted that simultaneous use of e-cigs and tobacco cigarettes is “riskier than using either product alone.”

What About Popcorn Lung?

We have known for nearly two decades that there is an association between diacetyl – a chemical commonly used in flavored e-cigarettes – and the development of a respiratory disease called bronchiolitis obliterans, a.k.a, popcorn lung. This condition involves irreplaceable damage to tiny air sacs in the lungs called alveoli.

Research suggests that diacetyl is present in as much as 75% of flavored e-cigarette products. Of course, this is cause for concern considering the known association between diacetyl inhalation and the development of bronchiolitis obliterans and “other severe respiratory diseases.”

Why Do People Prefer Vaping?

With all of the above information in mind, it begs the question of why people continue to think that vaping is inherently safe – or at the very least, safer than smoking.

One of the main attractions of vaping is its perceived ability to help people quit smoking. Vaping can indeed help individuals kick their cigarette habit, as evidenced by a study published in the Cochrane Library, which highlighted the effectiveness of nicotine e-cigarettes for smoking cessation. 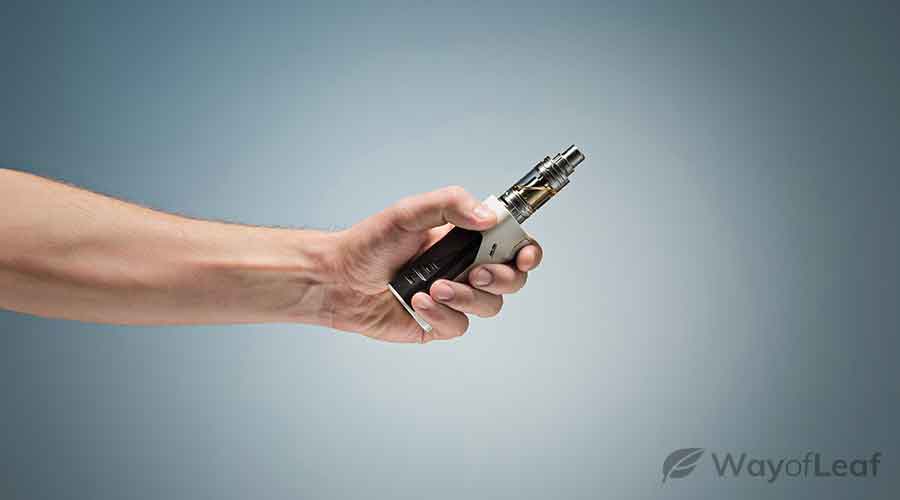 Vaping is also clean (i.e., it doesn’t leave a lingering odor on clothes and furniture) and provides a much smoother inhale than smoke from combusted tobacco.

E-cigarettes and other vape devices are also available in literally thousands of unique flavors, which is one of the main reasons they have had such an appeal among young users.

These are just a few of the biggest draws to vaping, but again, the underlying question is to what extent e-cigarettes and other vape devices affect lung function and overall health.

What About Cannabis? Is Vaping Marijuana Dangerous?

Marijuana vape oils may also pose a risk in terms of lung health and the development of respiratory illness. Like e-cigarettes and other nicotine-containing products, however, it is likely specific chemicals in commercial products that pose the greatest risk.

Diacetyl is common in many flavored cannabis vape products, as is propylene glycol, a thinning agent known to degrade into formaldehyde when heated to temperatures above 200 degrees Fahrenheit.

There has also recently been a focus on an ingredient called vitamin E acetate, another chemical commonly found in vape products.

In 2020, the Centers for Disease Control published a document highlighting the increased prevalence of vaping-associated lung injury (EVALI). They suggested that a “strong link” exists between respiratory illness/injury and the inhalation of vitamin E acetate.

Individual states have since launched investigations based on this concerning information. In New York, for example, health officials found high levels of vitamin E acetate in almost every cannabis vaping product they tested. They also noted a range of symptoms caused by vaping-related illness, including respiratory complications such as cough, shortness of breath, and chest pain.

Is There a Solution to the Vaping Problem?

Based partly on the above-cited information from the New York Department of Health, the FDA urges Americans not to use vape products that contain THC.

However, much more research is needed to determine whether vaping has adverse effects on the lungs. There are obvious distinctions, for example, between pure cannabis extracts and the thousands of flavored commercial vaping products out there on the market – many of which contain a variety of dangerous chemicals.

Final Thoughts on Vaping & What It May Do to the Lungs

An essential recommendation for vaping is to avoid products that contain any of the chemicals mentioned above. Also, avoid illicit vape concentrates and vape oils from the black market, as there is no way of knowing what these products contain.

It is likely not the inherent act of vaping that is dangerous to an individual’s lung health but rather the assortment of chemicals contained in commercial vape products. For example, vaporizing cannabis in the form of pure flower will not expose the lungs to formaldehyde from propylene glycol, nor will it increase the risk of EVALI from vitamin E acetate inhalation.

For those that do wish to continue vaping, be sure to choose your products wisely. Avoid illegal sellers of cannabis oil, and if you’re buying a product from a dispensary, be sure to ask for a lab report so you know what is in the product you’re going to be inhaling.