Cannabis has been used medicinally for several thousand years. There are accounts of the Scythians, Chinese, Japanese, and Persians using cannabis for various purposes. These ancient peoples knew that marijuana provided them with a unique experience. However, they had no idea what THC, the primary psychoactive compound in weed, was. Nor did they know how much THC their hashish contained.

Pharmacological experiments with individual cannabinoids were first performed in the 1940s and 1950s. CBN was the first marijuana plant cannabinoid to be isolated. Scientists first achieved CBN’s chemical synthesis in 1940. Although THC was first extracted from weed in 1942, researchers did not synthesize the compound until 1965 in Raphael Mechoulam’s laboratory.

As a result, it wasn’t possible to determine THC levels of marijuana until the 1960s.

How Strong Was Weed in the ‘Golden Age’?

You have probably heard about the ‘golden age’ of marijuana smoking when free love was the mantra. In the 1960s and 1970s, hippies got stoned and listened to music from The Doors, Led Zeppelin, and Jimi Hendrix.

Regardless of the tales you hear, there is no question that marijuana was less potent back then. One of the main reasons was the quality of weed available. Today, marijuana is legal for medicinal purposes in 35 states and counting. As a result, breeders are free to experiment, and the fierce competition means only the best will do.

Back in the 1970s, you could get an ounce of cannabis for about $20. However, half of the bag contained seeds and stems. As the drug was illegal everywhere, most of it came from other countries, such as Colombia. Dealers knew the demand was greater than the supply, so they could provide less than perfect herb.

Since 1972, the Potency Monitoring Program has tested the THC of marijuana samples provided by law enforcement. The size and scope of the samples varied enormously, so it is hard to take the average reading as Gospel. The samples typically contained no more than 3-4% THC, and the sample size was tiny. For reference, researchers analyzed no more than 18 seizures a year in the 1970s; today, they average more than 1,000.

Then there is the small matter of degradation. In many cases, the samples were analyzed several months or longer after harvest. They were not subject to the strict storage requirements we see today. As a result, the weed’s THC had likely degraded into CBN. If that is the case, the THC percentages quoted from the 1970s are almost certainly far weaker than the reality. 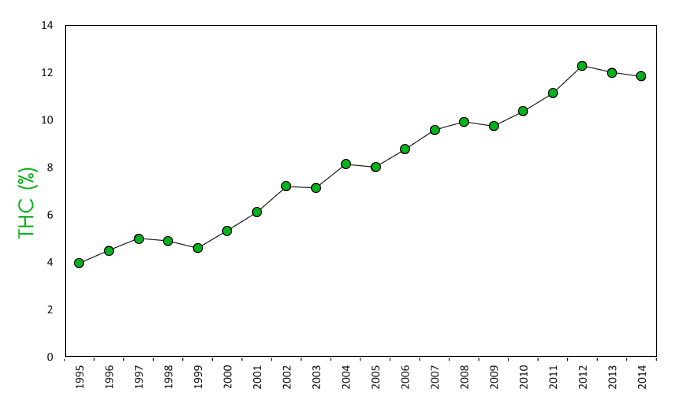 One other issue was that the main method of testing involved gas chromatography, which is not ideal for the quantitation of cannabinoids. This form of testing heats up the weed before analysis, which changes the chemical profile. As a result, the THC molecule breaks down, and you receive an inaccurate reading. Today, liquid chromatography is used and offers far more accurate readings.

However, it is a fact that weed was less potent than today. The so-called ‘brick’ weed contained little in the way of sinsemilla (feminized flower), which gives us the strong marijuana we adore.

There was a steep drop in the strength of marijuana in the 1980s. Does this mean that weed became even weaker? In reality, testing was based on samples taken from weak domestic crops rather than illegal imports.

In 1984, the National Institute on Drug Abuse wrote a paper admitting that the age of samples varied from several weeks to a few years! Moreover, researchers made no effort to take into account THC loss from improper storage over the years.

Because of inferior testing, it’s difficult to judge how potent marijuana was in the 1980s.

Imported cannabis became less prevalent during the 1980s because of the growth of hydroponically grown weed. This ‘fresher’ marijuana could have been a lot stronger than is believed, but inferior testing ensures we will never know.

A study by ElSohly et al., published in Biological Psychiatry in April 2016, looked at changes in cannabis potency from 1995 to 2014. In all, almost 39,000 samples were analyzed. The team found that marijuana had an average potency of 4% THC in 1995. Once again, it is tough to take this figure at face value, but there is no question that weed was still weaker.

Cannabis finally hit the big time in 1996 when California became the first state to legalize the substance for medicinal use in the modern era. As other states joined the party, it was inevitable that marijuana would become increasingly potent in the 21st century, and that’s precisely what has happened.

The ElSohly study found a noticeable increase in the amount of sinsemilla found in the cannabis they tested in the early 2000s. By 2014, the average THC content had risen to 12%.

The reduction in CBD was also extremely noticeable. In 2001, the average CBD content was 0.28%; it fell to 0.15% in 2014. Therefore, the THC:CBD ratio went from 14:1 to 80:1 within 20 years. This has major repercussions when it comes to analyzing the potency of marijuana. With less CBD, the THC is likely to have an even greater effect. 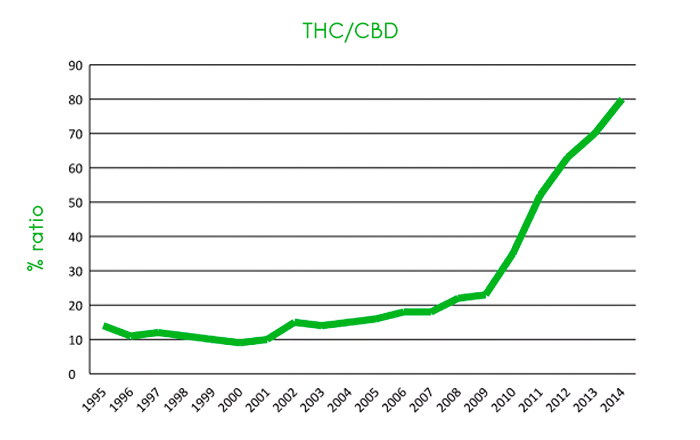 Apparently, the average THC in Colorado weed is 18.7%! Expert Jonathan Page from the University of British Columbia says he doesn’t pay much attention to strains with an apparent THC of over 28%. In his opinion, these results are either faulty or based on the fact that breeders add extra cannabinoids to the strain to make it stronger.

It is easy to say ‘yes,’ but that might not be strictly true. Remember, weed was illegal and hard to get back in the 1960s and 70s. What arrived from overseas was mainly stems and stalks, with little of the bud that contains the THC. Today’s weed is easier to come by and is entirely bud because consumers won’t stand for anything less. 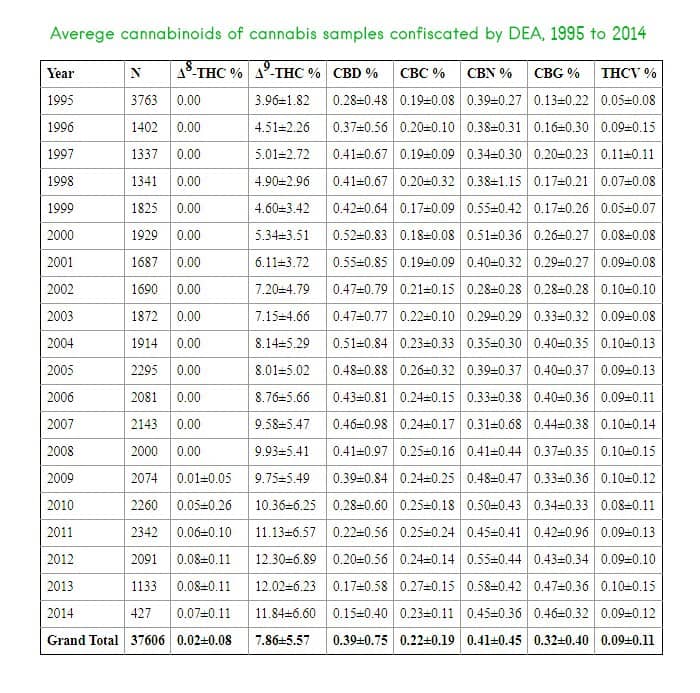 It could merely be a case of Americans not having access to the ‘good stuff.’ It is also illogical to suggest that weed has magically become stronger. It has grown for tens of thousands of years, and classic strains from the Hindu Kush Mountains are still highly sought after.

According to Page, he knows a hippie who traveled to Pakistan in the early 1970s to find strong weed. The seeds he bought back then are the source of the cannabis he still grows today. It is far more likely that the apparent change in THC levels is purely down to an increase in quality and availability.

Of course, breeders are eagerly trying to develop the most potent strains in the world. They have managed to create some knockout weed with sky-high THC levels. Yet even this process wouldn’t explain a sudden ‘increase’ in potency. They are simply mixing two or more existing strains. Perhaps Page’s point about manipulating strains by adding more THC is valid.

In 2017, High Times magazine wrote about Godfather OG, a strain with an incredible 34% THC. Just 20 years previously, weed had an average of 4% THC. Regardless of whether weed is more potent now, there is no question that the average American has more access to stronger marijuana than ever before.

If You’re Fascinated By Cannabis, Find a Career Involving It

3
6 min read
Join the discussion
TOC
Premium
Your subscription has ended
If you love cannabis and want to support our site, join WayofLeaf Premium today and unlock
Best of all, part of your membership fee will go towards supporting the fight to legalize cannabis.
Sign Up for WoL Premium
Not now
I already have an account
×
Log in to Your Premium Account