Cannabis has recently emerged as a topic of intense scrutiny and debate. It has been catapulted into mainstream consciousness and framed in myriad ways. Consequently, there has been a flurry of questions regarding cannabis’ safety and efficacy.

Studies are forthcoming on how cannabis operates within the body and the effects it can produce. Researchers have actively engaged in the analysis and description of both positive and adverse reactions.

One main area of concern is how cannabis could affect the endocrine system. The endocrine system plays a critical role in how the human body functions. It is responsible for regulating a variety of physiological processes, including sleep, growth, sexual maturation, and mood.

What Is the Endocrine System?

The endocrine system is a complex network of glands that work to produce chemicals in the body. These chemicals, known as hormones, activate a series of reactions. Many of these reactions are responsible for essential, life-giving activities.

For example, hormones oversee the digestive and reproductive systems, regulate sleeping patterns, and control the production of immune cells. Hormones vary by function and impact different parts of the brain in distinct ways. There are several types of glands:

Glands and Their Hormones 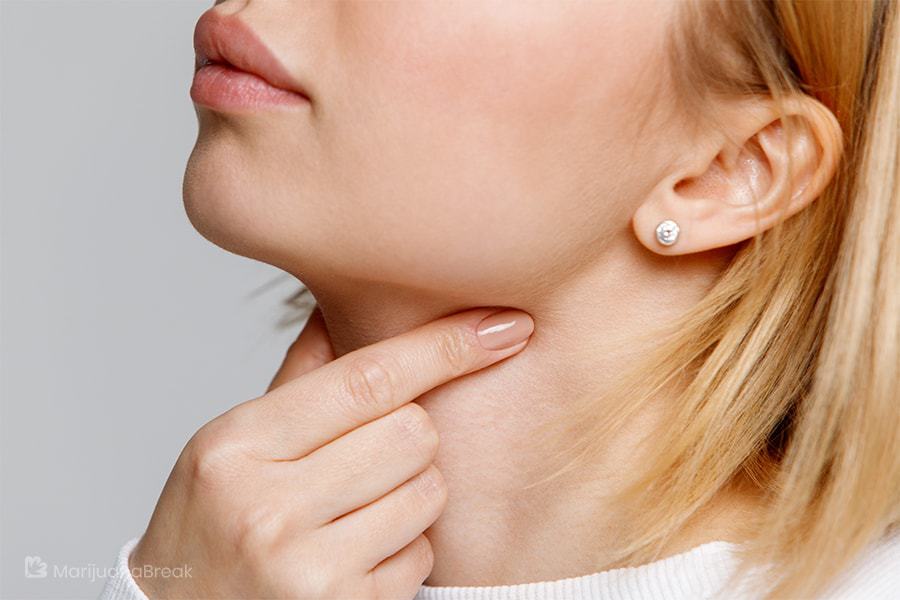 Adrenal glands lie on top of the kidneys. These small glands secrete epinephrine. Epinephrine is also known as adrenaline. Adrenaline is designated as the ‘fight or flight’ chemical. It can affect the heart rate, dilate the pupils, and induce sweating.

The adrenals are also the site where corticosteroids, mineralocorticoids, and androgens are created and secreted. These chemicals regulate blood pressure and mineral levels, such as salt and potassium.  Androgens are typically defined as male hormones, as they boost levels of testosterone and androstenedione. However, the adrenal glands in women secrete these hormones as well, only in smaller increments.

The thyroid is a butterfly-shaped gland that sits at the front of the neck and wraps around the larynx. It secretes three different hormones: Triiodothyronine or T3, Tetraiodothyronine or T4, and calcitonin. Iodine makes up the foundation of both the T3 and T4 chemicals.

The pituitary gland is small and pea-sized. It can be found in the brain, nestled between the hypothalamus and the pineal gland, behind the bridge of the nose. The pituitary is considered the “master gland” of the body. This is due to its influence on a variety of reactions and activities within the body.

The pituitary gland ensures the secretion of the hormones that regulate other hormone-producing glands. It also releases a series of other hormones that directly impact several critical body systems. Prolactin, for example, regulates the production of breast milk in women.

Growth hormone (GH) affects the liver and fatty tissues, as well as the bones. Other hormones that the pituitary produces are:

The pineal gland is the site where melatonin is manufactured and disseminated. Melatonin is a chemical that manages sleep patterns. Melatonin may also aid in the building of new bone.

The parathyroids are located in the neck near the thyroid glands. They produce a parathyroid hormone that controls the amount of calcium that circulates in the blood. Calcium plays a vital role in building bones and the clotting of blood.

Cannabis and Its Effects on the Endocrine System

Cannabis is derived from naturally occurring plants from the Cannabaceae family. It contains hundreds of compounds. These compounds include cannabinoids (such as THC and CBD), flavonoids, and terpenes.

THC and CBD make up the major chemicals in cannabis. THC, or tetrahydrocannabinol, can affect the body in significant ways. It works with the CB1 and CB2 receptors. These receptors are located across the body.

Receptors function efficiently as chemical doorways to the brain and other systems. Receptors are activated by the presence of messenger chemicals called neurotransmitters.

Neurotransmitters give the brain critical signals that it can interpret and translate, leading to responses that range from a rise in temperature to an elevation in compounds that stimulate mood.

When THC is introduced into the body, it binds to the CB1 and CB2 receptors. Many of these receptors are present in the endocrine glands. They are also crucial in the operation of the endocannabinoid system or ECS.

The ECS secretes cannabinoids, or chemicals quite similar to those in cannabis. As THC binds to critical receptors within the endocannabinoid system, it can influence the secretion of growth hormone (GH). It may also modify levels of thyroid-stimulating hormone (TSH) and other chemicals throughout the body.

CB1 receptors are also present in the ovaries and testes. As these are endocrine glands, when THC binds to CB1 receptors, it can affect how embryos travel within the fallopian tubes, and it can interrupt or inhibit signaling to the placenta.

In males, cannabinoids such as THC may affect gonadotropins such as LH and FSH. THC may also dramatically impact testosterone production in the cells of the testicles. It may also affect the release of prolactin and adrenal cortical steroids in men.

There is some concern that cannabinoids may harm the quality of sperm and sperm count. It is unclear whether there is a direct link between cannabinoids and sperm.

There may be an underlying mechanism whereby cannabinoids can impact sperm production and secretion. Further research is necessary to determine the role cannabinoids may play in the reproductive systems in men.

CB2 receptor expression may be especially useful in detecting the presence of cancer cells. A recent study on mice found that an abundance of CB2 receptors may occur when cancer was present.

Cannabinoids may also have a significant antitumor effect. Activated CB2 receptors may aid in the mitigation of anaplastic thyroid cancers.

Other Effects of Cannabis on the Endocrine System

Cannabinoids may amplify the effect of CB1 and CB2 receptors and may assist in the regression of diseases such as Graves’ disease. Although the precise mechanisms are unknown, the presence of cannabinoids has a positive reaction in the production of cytokines. Cytokines are a group of chemicals in the body, such as interferon and interleukin, which influence immune cell responses.

CBD may lead to an increase in the cytokine interleukin 10 (IL-10). Interleukin 10 functions mainly as an anti-inflammatory agent. It also works with the body to decrease autoimmune diseases and the introduction of pathogens into the body.

Final Thoughts on Marijuana and the Endocrine System

Humans have used whole-plant cannabis for the mitigation of symptoms for thousands of years. Recently, it has become the subject of study by researchers and experts. Due to this new and emerging scrutiny, there may be potential in cannabis use for a variety of diseases.

As research progresses into the various components of cannabis, we learn more about what it contains and how some compounds can be isolated and manipulated. As laws and attitudes continue to transform and morph, experts can become more knowledgeable about cannabis and the endocrine system.