Kief is a potent cannabis product that is only now growing in popularity. Some users believe kief is entirely different from marijuana. However, it is already in your possession when you have cannabis!

The next time you have some quality flower in your hands, perform a close examination (use a magnifying glass, if you have one) of the tiny hairs that look like crystals. These trichomes are the biggest producers of cannabinoids, including THC. Trichomes have evolved evolutionarily to keep herbivorous predators away. When an animal has a nibble of a weed plant, it becomes disoriented as the high kicks in. While they wander away to listen to the greatest hits of The Doors, the cannabis plant stays safe.

Kief is essentially dried trichomes that have fallen off of marijuana flower. As far as potency, is kief stronger than regular marijuana? Keep reading to find out.

Experienced cannabis users often suggest that kief is the original high-THC concentrate product. While the strongest cannabis flower usually has around 25-30% THC, this is still significantly less potent than kief. In fact, kief can contain anywhere from 50-80% THC, sometimes even more. For example some experts can collect 99% sift, which is made almost entirely from the heads of trichomes.

Kief is so potent because it is essentially nothing but pure, THC-containing trichomes. Trichomes are the most potent part of the marijuana flower, and contain the highest cannabinoid levels. Isolating trichomes provides a potent, intense high, which is why many MMJ patients with issues such as insomnia and chronic pain prefer kief. Kief also offers a fast-acting high.

How to Collect Kief

There are several ways to separate kief from cannabis, but a three-piece grinder chamber is arguably the best. Slowly grind your buds and allow them to fall through the grinder’s screen. They will collect in a small chamber at the bottom of the grinder, and voila – there’s your kief. You can use a two-chamber grinder, but the trichomes are more likely to stick to the outside of the chamber than collect at the bottom of it. 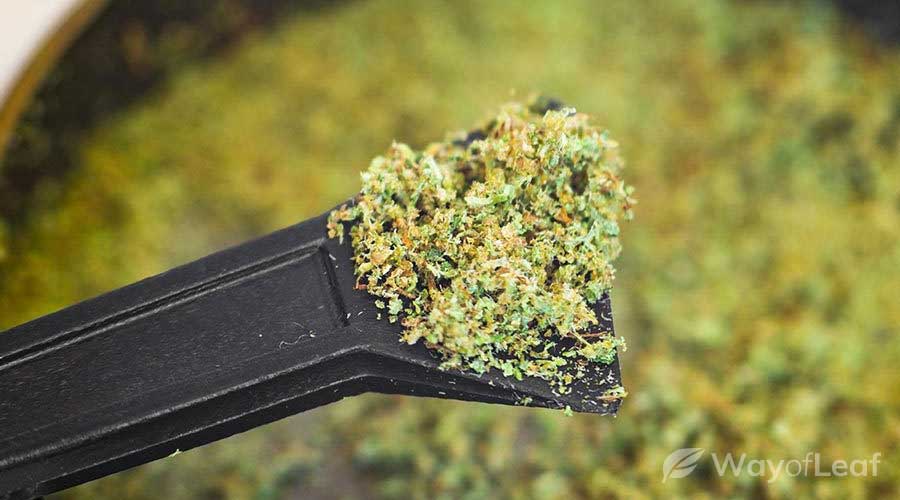 Using a three-chamber grinder is the most common method of kief collection, but the most effective in terms of potency involves dry-sifting with multiple layered screens. There are a variety of screens on the market that are made specifically for dry sifting, but if you’re looking for the most effective, you’ll want to find a screen that has up to 270 Lines per Inch (LPI). Also, when layering your screens during dry sifting, make sure you order them in a way that has the largest screen first and the smallest screen (more LPI) last.

Related article
Dry Sieve Marijuana: What is it?

And why you need to try making…

The Colors of Kief

There are several shades of kief. Generally speaking, the lighter the color, the purer (and more potent) the kief is. Kief that is dark green usually isn’t very strong, as there is still plenty of non-trichome plant matter in it. When kief is extracted professionally, it has an almost opaque, off-white color, indicating nothing but pure trichomes.

Here are six great ideas on how to use kief for maximum effect:

This involves adding a little bit of kief to your ground weed. The additional trichomes will stick to the leaves, making your joint far stronger. You can also dampen the outside of the joint with wax, then roll the top third in kief to create a ‘twax’ joint.

The majority of marijuana users like to ‘crown’ their bowl with kief to give their smoking session an extra edge. You can burn a quarter of the bowl at a time to benefit from several hits. In case you were wondering, the process is known as ‘cornering your hits.’

Extracting kief is one of the first steps towards making hash. Remember, hash is nothing more than heated kief crushed into a soft, green ball. When you apply heat and pressure to kief, you rupture the resin glands and alter their composition. The taste, color, and effects also change. If you want a darker hash, apply more pressure.

Moonrocks are joints that are coated in marijuana oil and rolled in kief. They’re easy to make, if you have the right materials. First, heat your oil and coat the buds with it. Then, add kief over the buds while they are still warm. Wait until they harden, and sprinkle them into a bowl or use your hands to break them up. (Check out our article on moonrocks to learn more).

5 – Spice up your Cannabutter

Kief is a great way to add some extra ‘kick’ to your cannabutter edibles. First, decarboxylate your kief in an oven to activate the THC. Then, melt you cannabutter in a saucepan over medium heat. Add the kief slowly and stir into the butter (it should take up to 15 minutes to fully dissolve). Once you are finished, you can store the kief butter in an airtight freezer container for up to six months.

Related article
How to Make Cannabis Butter, aka Cannabutter? [Recipe]

6 – Create Your Own ‘Bulletproof’ Coffee

There is a recipe for ‘bulletproof’ coffee doing the rounds on the internet. It involves coffee, Brain Octane Oil, and ghee or grass-fed butter. Proponents say it gives them the energy they need to get through the morning. Opponents say it is nothing but a marketing gimmick and that the brew contains empty calories.

With kief, you can make another version of “bullet proof” coffee. After decarbing your kief, add it to a cup of coffee while it is exceedingly hot. The heat is potentially enough to activate the THC and suspend it in the liquid. This will produce a caffeine-inspired, very unique high.

Kief is potent, and as you can see, extracting it from cannabis isn’t all that difficult. You may have to invest a few dollars to get the right equipment, but once you’ve experienced a proper kief high, you’ll realize that it was worth the extra money.

One last thing we want to point out is that kief burns very quickly. As a result, we recommend spacing it over the outer lining of your bowl to ensure it burns longer between hits. Otherwise, you’ll end up wasting it, which would be a terrible shame.

Also, since kief is so potent, a little is enough to do an awful lot. It is more than double – often triple or even quadruple – the strength of flower, so use sparingly!

Finally, it’s worth mentioning that some marijuana strains are better than others for producing kief. We recommend trying Chemdawg, Hash Plant, and White Widow. All three contain significant amounts of resin, which will result in loads of kief if you’re patient and have the right equipment to collect it properly.

4
5 min read
Join the discussion
TOC
Premium
Your subscription has ended
If you love cannabis and want to support our site, join WayofLeaf Premium today and unlock
Best of all, part of your membership fee will go towards supporting the fight to legalize cannabis.
Sign Up for WoL Premium
Not now
I already have an account
×
Log in to Your Premium Account