The days of only being able to use cannabis by smoking a joint or eating a brownie are long gone. Today, it is possible to vaporize, drink, or even absorb the substance transdermally. You can even rub it into the skin in the form of a cream.

However, cannabis edibles’ popularity has endured – though there are now of course many more options available other than the famed brownies. In this article, we outline all you need to know about different types of cannabis edibles.

What Is a Cannabis Edible?

It is a food or drink item that contains THC and other compounds, usually from marijuana flower, oil, or concentrates. Unlike smoking or vaping, edibles don’t negatively impact the respiratory system. They are ideal for MMJ patients with lung or breathing issues.

Edibles are also popular amongst individuals recovering from chemotherapy. If they use the right strain, it could provide a much-needed appetite boost. Consumption is as easy as eating or drinking the THC-infused product. There is now an impressive range of cannabis edible products, including:

Some brands have even created products such as THC coconut butter, cannabutter, olive oil, and flour!

How Long Does It Take for a Cannabis Edible to Kick In?

Newcomers to marijuana edibles should proceed with caution. It is a very different experience from smoking or vaping, which tend to show effects within minutes. In general, edibles take between 30 and 60 minutes to affect. However, for some users, it can take as long as 120 minutes. In reality, there is no way to tell until you try an edible.

Once you consume an edible, it is absorbed through the gut, and the liver metabolizes the compounds. The remaining THC and metabolites circulate through your heart and eventually reach the brain.

Factors that impact the onset time of marijuana edibles include:

A common mistake when using an edible is to become impatient and take a second dose soon after the first. This process could lead to several side effects, which we outline later on. If you are a first-time edibles user, wait up to 24 hours after consumption before trying another dose.

Although edibles take longer to effect than other forms of consumption, they are also potentially more potent. This is despite their relatively low bioavailability (absorption rate).

A study published in Pain Research & Management in 2005 looked at the pharmacokinetics of cannabinoids. The researchers found that orally consumed THC has a bioavailability rate of between 4% and 12%. However, they also noted that the absorption rate of THC is highly variable. 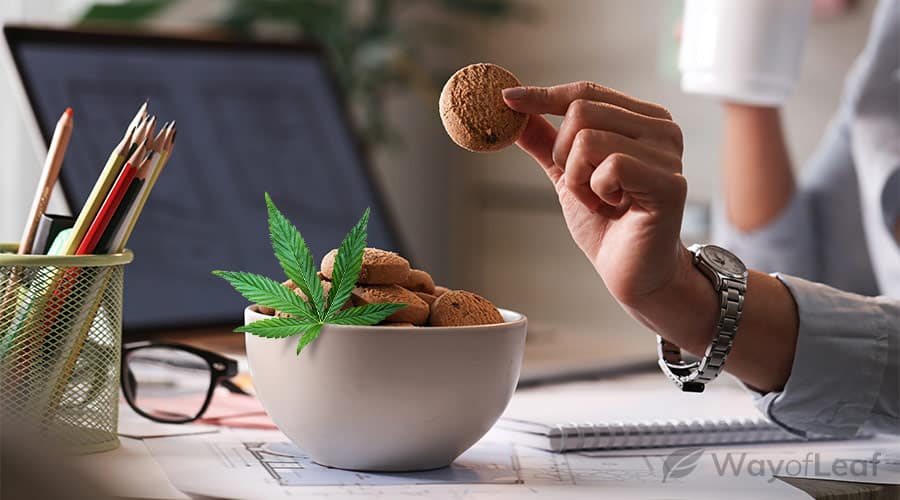 Combining cannabis edibles with fats may boost THC’s absorption rate. This is why brands use ‘carrier’ oils such as MCT when selling CBD and THC oil.

The potency of edibles is also measured differently compared to cannabis flower or concentrates. While the latter options include THC percentages, edibles often outline total THC content in terms of milligrams. Most states that permit MMJ or recreational cannabis sales, however, have limits on how potent edibles can be. In Colorado, for example, adults aged 21+ can buy a maximum of an ounce of cannabis flower or edibles with up to 800mg of THC in total.

Many people choose to cut or divide their edibles into smaller pieces. For instance, a chocolate bar with 100mg of THC might have ten sections. Each one has 10mg of THC. As long as the product comes with third-party lab reports, you know precisely how much of the cannabinoid you’re consuming.

As for dosage, a beginner should remain in the 1-5mg range and wait until the following day to evaluate the effects. If these effects are minimal, increase by a maximum of 2.5mg. An intermediate user could use 5-15mg, while an experienced cannabis user might have 20mg per dose.

How Long Does the Cannabis Edible High Last?

The THC in a marijuana edible is metabolized in the liver into a compound called 11-hydroxy-THC. This compound is significantly more potent than THC, which is why edibles can have a more substantial effect than cannabis flower. 11-hydroxy-THC has a longer half-life than THC, and typically produces a sedative effect.

The duration of an edibles high depends on several different factors, including the potency and dose of the product. The same factors that impact onset time also affect the length and intensity of the high. Typically, the ‘peak’ effect occurs around three hours after use. The intoxicating high is at its strongest at this point.

The high can last up to eight hours in some people, though this can vary enormously. A study published in Drug and Alcohol Dependence journal in 2017 found some interesting data. It explored Twitter accounts of people who used cannabis edibles to learn more about their effects. One noteworthy finding was that the duration of the high is unpredictable.

One myth surrounding edibles is that they are ‘safer’ than smoked or vaporized marijuana. While eating cannabis may be better for the lungs, there are some problems associated with the practice.

The ease of use is, in itself, potentially dangerous. It is much easier to over-consume a cannabis edible than it is to smoke too much marijuana flower. Remember, it is possible to purchase up to 800mg worth of edibles in Colorado, for example. That is the equivalent of up to an ounce of incredibly high-potency flower.

Even the most experienced smoker would struggle to get through a full ounce in a day. In contrast, you could theoretically eat an entire 800mg of edibles in one sitting. Remember, the 11-hydroxy-THC compound is more potent than THC, which leads to intense, possibly dangerous side effects.

Although there are no confirmed cases of deaths explicitly from a cannabis edibles overdose, the possible side effects are severe, and can include:

The intensity of the high could prove overwhelming and terrifying. It may also lead to devastating outcomes. In 2014, Levy Thumba made the mistake of eating an entire cannabis cookie containing 65mg of THC. He lost control of his faculties and ultimately died after falling from a hotel balcony in Denver.

A study published in CMAJ in 2020 found that young people and older adults were the two most at-risk groups when it comes to overconsumption of cannabis edibles.

Another study, published in the Annals of Internal Medicine in 2019, looked at the possible harms caused by edibles. It reviewed the number of people who went to emergency rooms in a large urban hospital in Colorado. Researchers found that between 2012 and 2016, there was a 200% increase in cannabis-related ER admissions.

During this period, edibles comprised less than 1% of cannabis sales by THC content. Furthermore, only 3.6% of marijuana users say they consumed edibles. However, edibles were involved in approximately 11% of cannabis-related ER visits. There were three deaths associated with marijuana in Colorado during this period. All of them were related to edibles.

The delayed onset of the high is one of the main factors. However, the added potency of the experience also plays a role.

As the name suggests, marijuana edibles are a form of the plant that a person can eat or drink. Once orally consumed, the compounds make their way through the digestive system and are metabolized by the liver. At this point, the THC becomes a stronger compound called 11-THC-hydroxy.

Edibles are a quick, easy, and delicious way to use marijuana. It can take up to two hours to feel the intoxication in some cases. However, the high is more robust and often lasts longer than other forms of THC consumption.

While cannabis edibles are popular amongst MMJ patients, in particular, they are not without risk. It is easy to consume too much THC via an edible, and side effects can range from mild to very severe. When using edibles, it is essential to use a small amount at first and wait a long time for the effects. If edibles are consumed responsibly, they are a potentially convenient and useful way to use cannabis.

Related article
Edibles vs. Smoking Cannabis Explored: Which Is Healthier?