Every seasoned smoker you meet will have a handful of favorite strains, whether it’s the classic OG Kush for a euphoric high or Blue Dream for its sweet berry flavor.

But one thing everyone seems to be able to agree on is how terrible reggie weed is.

Regarded as the black sheep of the family, this strain will not keep you coming back for more, but how did it land such a bad reputation? Let’s have a look at its characteristics compared to a typical top-shelf strain as well as a Reggie weed definition.

Reggie weed is a low-grade C strain – although some consider it a B+ or mid-grade weed – usually with a sativa-dominant heritage. It’s typically considered a beginner’s strain as its effects are very mild, with THC levels around 15% to 18%.

How Well Does Reggie Weed Grow?

Do you know the phrase you reap what you sow? Never has it been truer. Very little affection goes into the cultivation of this strain. Reggie weed is typically grown outside, and while this isn’t necessarily a bad thing, it can make growing a lot more difficult.

When growing indoors you can regulate moisture levels, sunlight and temperature to create a high-quality variation. Often, growers will give little attention to developing the plant and simply leave it alone until it produces a decent amount of leaves, which is often not many.

Another problem with this strain is that the female variety is fertilized, which means it typically produces more seeds than leaves. It then uses its valuable energy on the seeds instead of the leaves, which reduces the quality of the strain.

Now appearance isn’t everything but in the strain world, it can be a great indication of the weed quality. Many describe it as having an unusual dull, dark green or brown color. Often, it’s dotted with many seeds but lacks much of the appealing crystallization you hope to see. 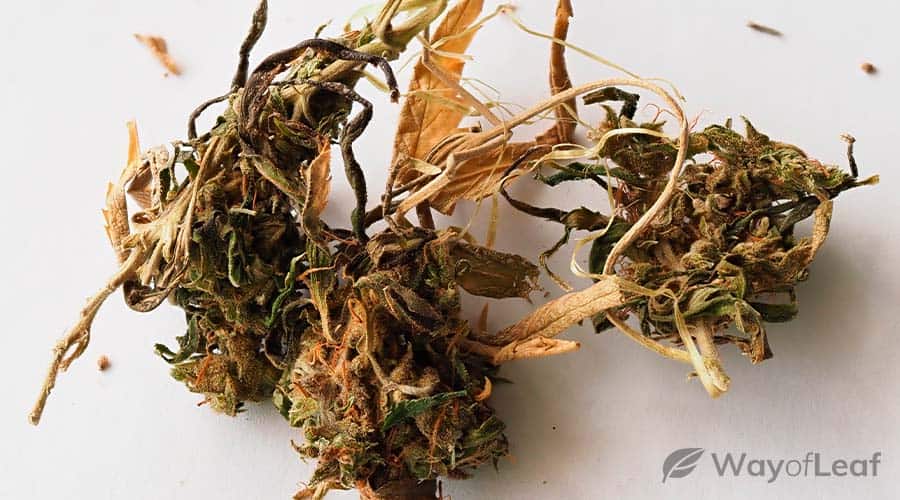 Normally, with high-quality strains like Candy Kush, there will be a mass of trichomes. These are the attractive crystals or frost that form on the buds. These trichomes are also the source of all the cannabinoids and terpenes in your cannabis, so with little visible, you can expect a very mellow high. High-quality strains should have quite an appealing bright green color unless they have been genetically modified.

Smell can be a huge factor when determining what strain is right for you, some people prefer hard-hitting smells like Platinum Bubba Kush. This strain has a very floral and spicy scent, which many people love. Not all high-quality strains will have a great smell but typically if they lack in scent, they make up for in either taste or effect. Unfortunately, this cannot be said for Reggie weed, it’s not what attracts potential buyers. The strain is often described as having a mild skunky or dry hay smell. While it’s not terrible, there’s nothing alluring about it either.

What Texture Does Reggie Weed Have?

Luckily, one thing we can depend on is its beautifully sticky texture… Not. Reggie is very dry and dusty to handle and feels a lot like grass clippings. The leaves will often flake from the nugget, leaving a very airy and disappointing bundle of weed. High-quality strains will, again, all have a slightly different texture.

A strain which has a similar texture to Reggie is Fat Banana, but unlike Reggie’s very limp appearance, Fat Banana has a very pleasant, fluffy build.

Strains on the opposite side of the spectrum are like Candy Kush. Candy Kush retains more moisture than a lot of other strains. It has a sticky texture that will often leave resin on your fingers. Compared to Reggie, it is also very dense, which is most obvious when you attempt to squeeze in between your fingers.

Reggie weed doesn’t have a particularly memorable taste. It’s often described as bland with occasional hints of herb or grass – not the most inspiring of flavors. That is unless you accidentally smoke some of the seeds. This can produce not only a bitter taste but an awful smell, which has been described like burnt plastic. Perhaps not full of flavor for the right reasons!

This is disappointing considering the amazing variation of taste in other strains. One of these is the Tangie strain, a citrus wonderland. Opening a bag of this will make you feel instantly summary, with a strong taste of apricot and mango too. If you prefer an earthy taste, another high-quality strain is Dutch Treat. Its flavor is rooted in rich pine, with pleasant herbs such as sage and a sharp lemon twist to round it out. So many strains have increasingly amazing and complex flavors that really outshine the dull experience of Reggie.

What Effects Will You Experience?

Reggie produces a relatively quick but mild high. Because of its low THC levels, it doesn’t have the power to create a strong psychoactive reaction. Some smokers have trouble feeling any kind of high at all. The strain, as said above, is also very dry – this can often cause a lot of coughing when smoked and a very unpleasant dry mouth. Certain high-quality strains have been cultivated to deliver amazing highs such as Godfather OG. This is a strain guaranteed to knock your socks off, as it once had a THC level of 34.04%, breaking the world record for the highest THC content.

If it’s not built for psychoactive properties then it must be made for medicinal use, right? Unfortunately, even its CBD levels can’t save it. As a strain, it’s not well looked after or developed enough to be used as an effective treatment for many ailments. That’s not to say it won’t help at all, but they are many more strains such as Harlequin which will produce a much better effect.

When Is Reggie Weed a Good Idea?

Okay, let’s give Reggie weed a break. While it’s not popular among avid cannabis smokers, it can be a decent strain for those beginning their cannabis journey.

Many describe Reggie as one of the first strains they ever tried, probably because it’s a lot more approachable than other types of cannabis.

It can ease you into smoking without you having to try the more intimidating and powerful strains like Purple Kush. At least it’s a strain you can only move up from.

It’s also a very accessible strain, so if you are desperate to get your hands on it quickly, it’s entirely possible to so. Whereas some strains can be very niche or are simply more difficult to grow. Another reason you might choose to use Reggie is that it’s incredibly cheap, which probably isn’t surprising given its quality. Basically, if you are a cannabis newbie and you want a cheap, accessible strain, Reggie isn’t all that bad.

It’s no wonder strain connoisseurs are increasingly frustrated with Reggie; it lacks any imagination or excitement, whether that be in the high, taste, or smell. There are plenty of other varieties that can give you a great high or medicinal aid.

Many more states are legalizing cannabis – will this lead to a higher production of top-quality strains, so does this mean the end of Reggie? Yes and no. From what we can see so far, creativity in cannabis strains will continue increasing. But for now, it looks like there will always be a place for low-quality varieties like Reggie.