The small building located at 900 N College Ave, Fort Collins, doesn’t stand out in the Colorado landscape from the outside. However, within it lies an outstanding dispensary known as the Infinite Wellness Center. It offers cannabis to recreational and MMJ users alike and is regarded as one of the finest businesses of its kind in the region.

The Infinite Wellness Center markets itself as a one-stop-shop for all thing’s cannabis. The company’s goal is to sell top-notch products from the nation’s best brands. As it operates in Colorado, it has access to some phenomenal marijuana.

For years, the Infinite Wellness Center enjoyed a stellar reputation for quality products and excellent customer service. Therefore, it was no surprise when LivWell Enlightened Health purchased it in February 2019. At the time, it was the 15th dispensary that belonged to the LivWell brand in Colorado. At present, LivWell now has 19 dispensaries in the state.

There may have been concerns over the takeover, that perhaps it would dilute the quality of an excellent dispensary. Fortunately, this hasn’t happened.

The Infinite Wellness Center still provides the same comfortable, professional, relaxing, and non-judgmental experience for every customer, every time.

It continues to live up to its promise of retaining an atmosphere, level of professionalism, and a variety of products that are the hallmark of all great dispensaries.

This dispensary has acquired a reputation for excellence, so let’s look at its best aspects: 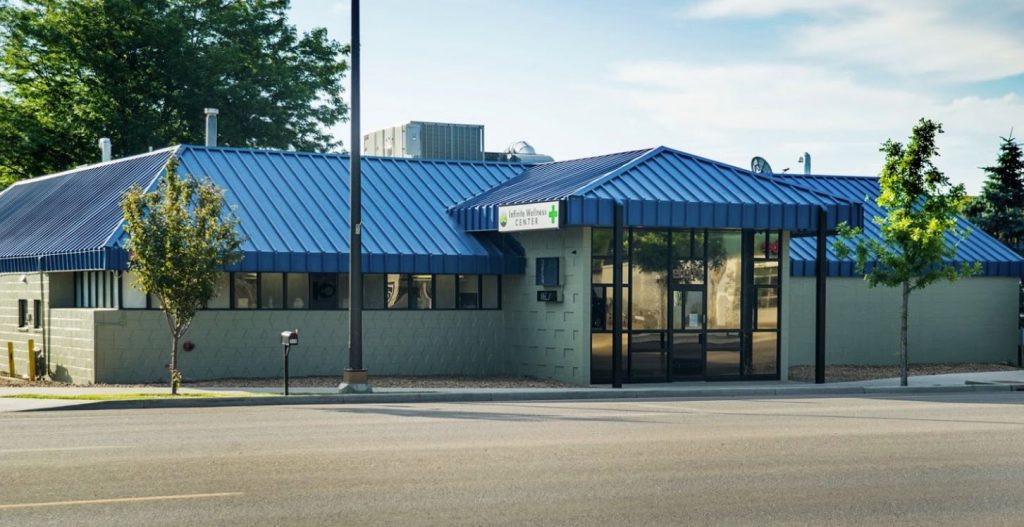 One downside is that the Infinite Wellness Center used to accept credit cards. However, since the takeover, it only permits debit cards. Some customers say it rounds purchases up to the nearest $5 and provides change like an ATM.

At the time of writing, the Infinite Wellness Center in Fort Collins offers over 300 products. LivWell has offerings from top brands, including:

That said, you have to click on each brand to see if the dispensary currently has it in-store in the specific LivWell location. For example, the website says it has Cheeba Chews, but when you click on the logo, the page tells you that products from the brand are not available in Fort Collins.

If you are a member, you can get an eighth of flower pre-weigh for just $15 and an ounce pre-weigh for $99.99 as a recreational or medicinal user. There are also gold and platinum pricing options that work out cheaper for MMJ customers.

There is also the option to order online and collect the product at the dispensary later. This is ideal if you know exactly what you intend to purchase.

LivWell is a family-owned cannabis company that was established in 2009. Currently, the company has 19 dispensaries in Colorado alone, along with hundreds of employees. With hard work and careful tending, they’ve grown from operating in a single location to becoming one of the country’s leading cannabis companies.

LivWell knows how potent marijuana is, and they want to use that power for good. They strive to protect their patients’ right to high-quality medicine. The company seeks to encourage education and responsible use.

LivWell is committed to helping cannabis to shed its highly unjustifiable stigma and gain the credit it feels the plant deserves.

That said, LivWell is no stranger to controversy. In 2015, it was one of ten businesses that had its cannabis plants confiscated by the Denver Department of Environmental Health.  This was due to concerns over whether the plants were treated with pesticides.

At the time, a pair of cannabis users sued LivWell and sought a class action lawsuit. However, the case was dismissed in February 2016 because the plaintiffs failed to show that they had sustained injuries in a legal sense. The company released a statement saying that the lawsuit was designed to smear its name.

If you go online, there are still cannabis users that don’t trust LivWell. However, the fact that the brand has expanded and flourished in the last few years suggests that its name wasn’t severely damaged.

So, What Is LivWell’s Location in Fort Collins Like?

Located just off Highway 287, the dispensary is only a few minutes away from the I-25 freeway. It is also within sight of the Cache la Poudre River that runs through the town.

The Infinite Wellness Center is surrounded by several notable landmarks, including well-known breweries and a pair of gorgeous parks. Also, Colorado State University is nearby.

The dispensary is a full-service marijuana store that carries a vast array of products. The selection is ideal for cannabis connoisseurs and marijuana newbies. In most cases, customers receive adequate one-to-one time discussing possible purchases with a budtender.

Some of the most popular marijuana strains available at present include:

Keen to avoid the scrutiny of the past, LivWell does its utmost to ensure its cannabis isn’t free from pesticides, insecticides, and other unwanted chemicals.

LivWell stocks one of the largest cannabis selections in Colorado. They boast several of the top marijuana brands and sell products for extremely reasonable prices. Previously known as the Infinite Wellness Center, the LivWell Center in Fort Collins has a strong focus on customer service. It is fully committed to providing patients with great products and service at an affordable price.

LivWell continues to grow and thrive, and we doubt it will be long before it buys yet another Colorado dispensary.

LivWell Enlightened Health is one of the fastest growing recreational and medical marijuana dispensaries in the United States. They have grown exponentially over the past ten years, and don’t show any signs of slowing down. They are located all throughout Colorado – where their first dispensary was opened – and now in Oregon as well. […]

For over 20 years, this amazing dispensary has been providing its clients with top level service and products that simply attract clients to come back for more and more. Located in NE Portland, just east of I-205, CannaSource is the perfect dispensary for locals and travelers. You can also get to it with ease from […]

A high-quality and incredibly professional dispensary that was established in 2011, Lightshade has been gaining a lot of attention in the Denver area. From its outstanding customer service, to top grade product that is grown by Lightshade themselves in their very own state-of-the-art cannabis cultivation facilities, it’s no wonder that locals are falling in love […]

LivWell on Broadway goes beyond the classic dispensary experience. Become a part of the legal weed revolution with a shop that in directly involved in every step of the cannabis process. From cultivation and harvest, to providing the best quality product at the most competitive prices, LivWell wants you to be well and enjoy some […]