There is no academic or clinical evidence suggesting that CBD oil – or any CBD product – causes nightmares or bad dreams. With that being said, if you go online and search some forums on the topic, it’s quite easy to find plenty of anecdotal reports that claim the opposite.

In this article, we discuss whether or not the CBD oil (or any other CBD product) you’re taking may be resulting in weird dreams while you’re asleep.

The Myth of “Non-Psychoactive” CBD Oil

Before we talk about CBD oil, nightmares, bad dreams, and so on, let’s discuss the myth of CBD oil being non-psychoactive.

From a medical perspective, the word ‘psychoactive’ is quite broad in its scope; it essentially refers to any substance (prescription drugs or otherwise) that alters the function of the brain.

We know through research that CBD impacts things like stress, anxiety, PTSD, and so on, so in this sense, it is a psychoactive compound.

The confusion lies in the fact that CBD does not produce a high. Many resources (including some that are quite reputable) refer to CBD as a non-psychoactive compound since it does not produce the psychedelic effects of a high. The proper verbiage to use, however, is non-intoxicating.

This doesn’t have much to do with CBD causing nightmares or bad dreams, but we figured now was a good time to point out this relevant bit of information.

CBD & Nightmares/Bad Dreams: Is There Any Evidence?

Again, we reiterate the fact that there is no evidence linking the use of CBD to bad dreams – or any erratic dreaming episodes, for that matter. In fact, several research studies point to the fact that CBD may be beneficial in terms of achieving healthy, quality sleep.

One randomized study, for instance, concluded with a report suggesting that CBD “…[does] not alter normal sleep architecture.” The placebo-controlled, double-blind study – which was designed to gauge the effects of a 300mg CBD dose on sleep-wake cycles in human test subjects – concluded that CBD “did not seem to interfere with the sleep cycle of healthy volunteers.” 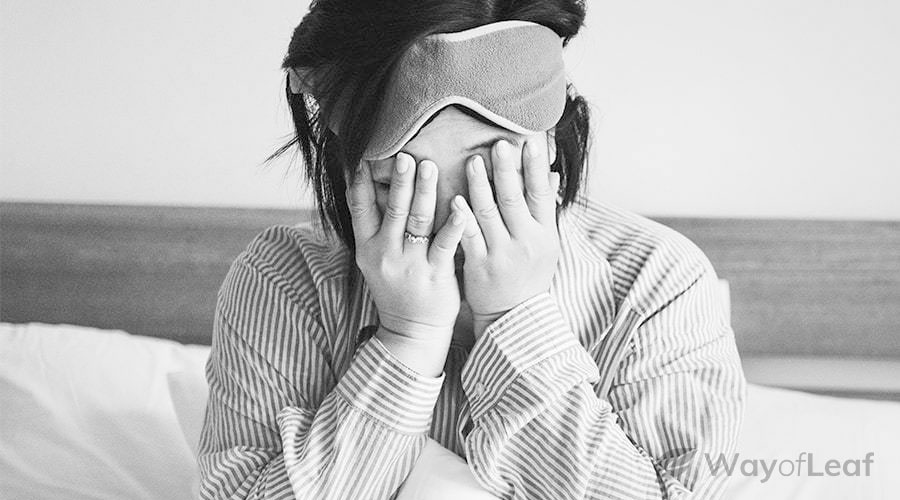 A separate study, published in Neuropharmacology in 2012, suggests that CBD actually “reduces physiological REM sleep in normal rats.” This is relevant since most dreaming episodes occur during the REM (rapid eye movement) stage of sleep. However, the study also noted that, aside from the anxiolytic (anxiety-reducing) effects of CBD, the effects of the compound on “anxiety-induced sleep disturbances remain unclear.”

Finally, in a more recent 2019 publication that was developed to observe CBD’s specific effects on sleep and anxiety, researchers found that nearly 70% of patients experienced an improvement in sleep over the first month of the study. CBD was “well-tolerated” in 95.8% of the patients, and the study made no mention of nightmares, bad dreams, or enhanced dreaming episodes.

So Why Do Some People Say CBD Oil Gives Them Nightmares or Bad Dreams?

Anecdotal evidence – i.e., non-scientific accounts of people’s personal experiences – generally holds little merit within the clinical, medical, and scientific communities. Those who think they may be able to benefit from CBD should not let anecdotal reports of nightmares (such as those found in popular online forums) influence their intentions of using CBD.

Is it possible that some people have experienced bad dreams or nightmares after taking CBD oil? Absolutely. Is there any evidence suggesting it was the CBD that caused these nightmares? No.

As with all things, it is suggested to use CBD moderately at first, and if needed, work up gradually in terms of daily milligram consumption. And of course, always try and speak with a doctor whenever possible about implementing CBD into your daily routine.

If you have taken CBD and experienced bad dreams, it could prove beneficial to try and take CBD earlier in the day rather than right before going to bed.

Furthermore, for individuals that hold a medical cannabis card or have access to legal recreational cannabis dispensaries, it may be worthwhile to try a small dose of a higher THC product, such as an oral 1:1 THC: CBD spray. THC is known to increase the amount of time spent in deep sleep, which is a stage of sleep typically void of any dreaming episodes.

Normal sleep is broken up into REM sleep and three distinct stages of non-REM sleep. The first stage of non-REM sleep (Stage 1) typically lasts just several minutes and occurs when an individual begins to shift from wakefulness to actual sleep. Brain waves begin to slow here, the heart rate lowers, and muscles start to relax.

Stage 2 sleep involves even more dramatic relaxation of the muscles, as well as continued lowered heart rate and decreased body temperature. Deep sleep, or Stage 3 sleep, is crucial when it comes to cellular repair processes. This is when the body and the brain are at their most relaxed. When individuals enter into a deep sleep, they don’t typically dream because cerebral activity is largely halted.

REM, or rapid eye movement sleep, on the other hand, is the stage of sleep where most dreaming episodes take place. In a physiological sense, REM sleep (which typically occurs about an hour and a half after someone falls asleep) involves several peculiar – albeit entirely normal – processes.

The eyes shift quickly behind the eyelids from side to side, breathing becomes erratic, and heart rate and blood pressure levels rise considerably compared to non-REM sleep stages. Again, based on the above-cited research, CBD does not appear to directly affect any specific stage of the sleep-wake cycle.

All in all, there is little concern (and zero scientific evidence) that CBD oil causes nightmares or bad dreams. While there are plenty of reports of individuals experiencing weird dreams after taking CBD, there is nothing to support the notion that CBD specifically causes the problems.

That being said, always remember to use CBD responsibly, and try and do plenty of research before making any purchases to find the safest, highest quality, most reliable CBD products you can afford.

CBD for Lyme Disease [Does It Play a Role?]

Could CBD offer some respite?

7
5 min read
Join the discussion
TOC
Premium
Your subscription has ended
If you love cannabis and want to support our site, join WayofLeaf Premium today and unlock
Best of all, part of your membership fee will go towards supporting the fight to legalize cannabis.
Sign Up for WoL Premium
Not now
I already have an account
×
Log in to Your Premium Account