A study published in the Journal of Dermatological Science in 2007 revealed something interesting regarding CBD’s effect on skin conditions. Cannabinoids like CBD can inhibit keratinocyte proliferation, a central contributing factor to chronic skin conditions like psoriasis.

Clinical investigations thus far are limited. Also, there are no adopted protocols for using CBD for psoriasis. However, some individuals are already using cannabis-infused topicals to reduce symptomatic flare-ups. Many of these users have experienced positive results.

In this article, we take an in-depth look at psoriasis and how it affects the skin. We also analyze the functions of CBD and other cannabinoids, investigating how they may work to inhibit the hyperactive skin proliferation that leads to psoriatic flare-ups.

Psoriasis – What Is It, What Causes It, and Who’s at Risk?

Psoriasis is a non-communicable (non-contagious) disease of the immune system wherein T-cells attack healthy skin cells at an abnormal rate. Instead of the normal 28-30 days, new cells are produced every 2-4 days.

This results in a buildup of dead skin tissue due to the epidermis’ inability to shed old skin cells faster than the production of new cells. Though genetics play an important role in the onset of psoriasis, the exact autoantigen that triggers the T-cell attack on healthy tissue remains unknown.

What’s certain is that, depending on the severity of the condition, the physiological pathways of psoriasis can cause an array of other medical conditions. This can include psoriatic arthritis, which affects 10-30% of patients and can permanently disfigure joints.

Severe localized pain due to inflammation of the epidermal blood vessels is another issue. Additionally, individuals with psoriasis are 50% more likely to suffer clinical depression than average. 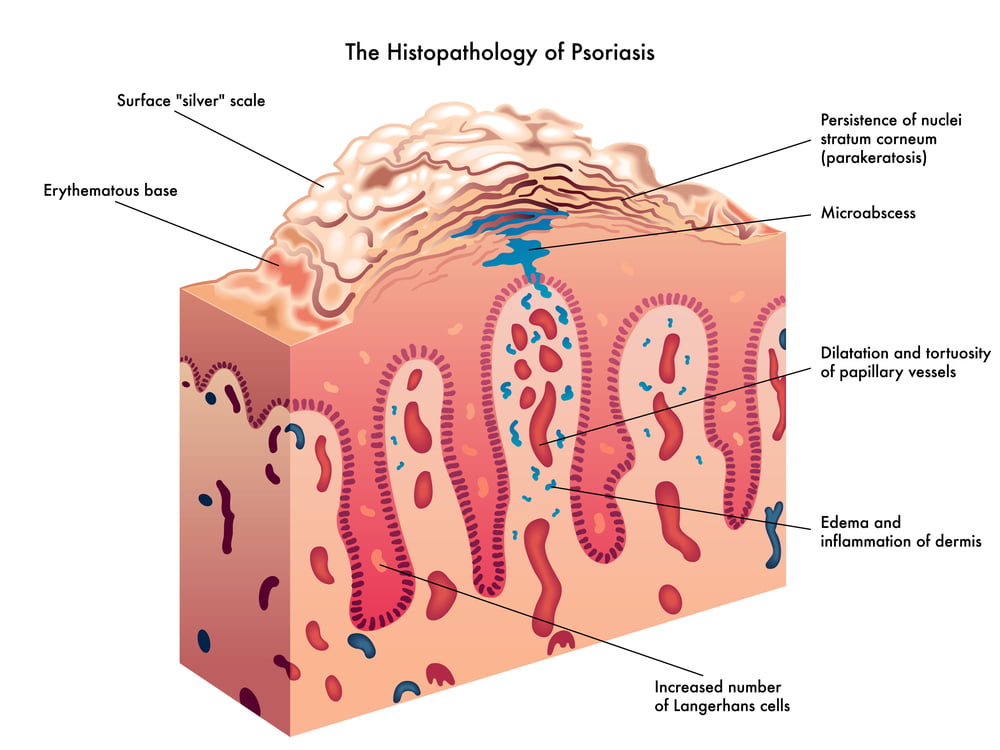 The role of genetics in the onset of psoriasis is well-known. For instance, a study published in the Psoriasis Forum in 2010 revealed that the risk of psoriatic arthritis was almost 50 times higher among first-degree relatives of people with the condition than the general population.

Certain environmental factors could also increase the onset and severity of psoriasis, including obesity, smoking, cold weather, and stress.

Topical creams are generally the first-choice recommendation in cases of mild psoriasis. These include products like corticosteroids, retinoids, and vitamin D replicators. While moderately effective, they are typically designed to alleviate sporadic flare-ups and localized symptoms of itching, burning, and general skin irritation.

DID YOU KNOW: Factors such as stress, obesity, smoking, and even cold weather can lead to psoriasis flare-ups?

Lastly, prescription medications are the only form of conventional treatment designed to target psoriasis’s underlying physiological pathways. However, the success rate of such drugs is often underwhelming.

Some of the most routinely prescribed medications include drugs like:

These medications are extremely cost-prohibitive. They could also increase the risk of infections and instances of kidney problems and high blood pressure.

Likewise, biologics such as Humira (and other drugs that alter the immune system) are particularly dangerous. They work by decreasing immune activity, thereby exposing the patient to potentially life-threatening infections.

Conventional psoriasis drugs like Humira boast a long list of severe side effects. So, could CBD be the all-natural solution that millions of sufferers are looking for?

Is CBD for Psoriasis a Viable Alternative to Standard Treatments?

From a clinical perspective, psoriasis remains one of the trickier non-communicable autoimmune disorders to try and define. This is partly due to the number of ways it can manifest itself in the individual and that no known autoantigen triggers it.

However, research has pointed to several different key factors regarding the disease’s onset, manifestation, and subsequent medical complications:

CBD topicals for psoriasis have emerged as potentially viable alternatives to conventional treatment options. This is largely based on their anti-inflammatory properties, role as autoimmune regulators, and influence on whole-body homeostasis.

A CBD topical for psoriasis likely isn’t first on your physician’s list of treatment options. However, it is proving worthy of serious consideration for individuals living with psoriasis.

Research on CBD for psoriasis remains limited. Despite this, the results of several studies are promising, and we analyze a few below.

CBD for Psoriasis: What Does the Research Say?

As CBD has anti-inflammatory effects and is considered an immune modulator, it makes sense that it could help with an autoimmune and inflammation-inducing disease like psoriasis.

A study published in Medical Hypotheses in 2017 showed the role of cannabinoids (CBD) in suppressing both inflammatory cytokines and angiogenic growth factors (two of the key constituents involved in the symptomatic onset of psoriasis) within epithelial layers.

The endocannabinoid system (ECS) is an innate network of cannabinoids and cannabinoid receptors inside the human body.

According to the National Organization for the Reform of Marijuana Laws (NORML), the ECS is perhaps “the most important physiologic system involved in establishing and maintaining human health” due to its role as a regulator of homeostasis. Homeostasis is an active process the body undertakes in response to harmful stimuli.

Intriguingly enough, publications have also pointed to a functional ECS within the skin layers responsible for psoriasis. A study published in Trends in Pharmacological Sciences in 2019 revealed the main function of the cannabinoid receptors within skin layers was to “control the proper and well-balanced proliferation, differentiation, [and] immune competence and/or tolerance of skin cells.”

The above is far from the only evidence of the potential benefits of CBD for psoriasis.

The Medical Hypothesis study also noted CBD’s inhibitory effects on the proliferation of “epidermal keratinocyte differentiation” – in other words, the inhibition of uncontrolled skin cell reproduction.

A study published in Skin Appendage Disorders in 2020 analyzed the effect of CBD shampoo on scalp inflammation among patients with psoriasis. The researchers discovered that the shampoo helped reduce the severity of burning and itching in patients with seborrheic dermatitis or scalp psoriasis.

Research has shown CBD’s potential to influence the underlying causes of psoriasis — as well as the symptoms.

Overall, research to date has effectively showcased CBD’s potential to influence, manipulate, and ultimately correct the underlying conditions of psoriasis, the onslaught of symptoms, and side effects brought on by its characteristic pathways.

Finally, given the increased risk of clinical depression among psoriasis patients, the positive effect cannabinoids can have on mood is worth noting.

CBD Oil for Psoriasis: Before and After

While scientific research is ongoing, there is plenty of anecdotal evidence suggesting CBD helps reduce the effects of psoriasis. We have read countless testimonials from people who couldn’t believe the effect CBD had on their skin condition.

The most compelling evidence is arguably images showing what a CBD user’s skin looked like before and after using it. In many cases, psoriasis patients had the condition for several years and found that conventional options did little or nothing. Some claimed that the condition covered 15-20% of their bodies, forcing them to wear make-up to cover the visible patches before CBD changed everything.

In general, even long-term psoriasis patients claim the cannabinoid offers noticeable results within a month. However, please note that no CBD company is allowed to say its product is suitable for treating psoriasis. Such claims are against the law and usually come from brands of dubious quality.

Also, remember that CBD oil will likely have a different effect on you than someone else. Just because it helped reduce the effects of psoriasis in someone you know doesn’t mean it will impact you the same way. Although there are no specific ‘best’ CBD oil brands for helping with psoriasis, we now outline five of the best sellers in the industry.

While the benefits of CBD are manifold according to users, psoriasis patients are best served to focus on CBD topicals. Once you buy a product, rub a small amount on your skin to ensure no adverse reactions. Then, apply liberally to the area(s) affected by psoriasis. Here are five CBD topical products worth considering:

Remember, none of the above products are specifically designed to combat psoriasis. However, you might find that the soothing effect provides you with a worthwhile feeling of relief.

Final Thoughts on CBD for Psoriasis

Scientific data suggests that CBD’s positive effects on psoriasis are worth further investigation. For many people with the condition, it is already a viable alternative to prescription drugs.

CBD works to suppress both the inflammation-inducing agents and the skin cell proliferation pathways consistent with the disease. Moreover, it acts as a more than capable therapeutic factor in managing onset symptoms, specifically pain and depression.

However, CBD topicals may be a more viable option over oils as they are applied directly onto the skin and impact targeted areas.

Despite the existing research to date, there is still a huge amount we need to learn about CBD for psoriasis and other conditions. Therefore, make sure you conduct research and perhaps speak with a medical professional before using it to help with your skin condition.

For those who want to browse premium CBD topicals without any hassle, look at our top-rated topical products below. 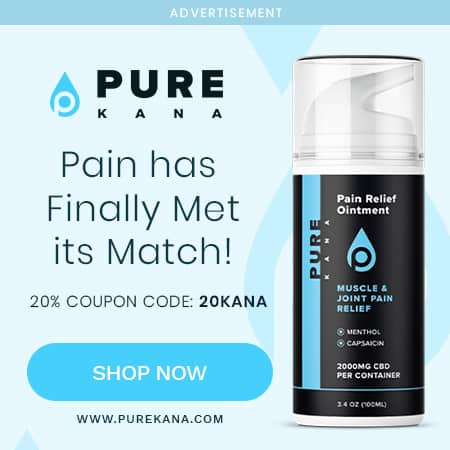