Medically reviewed by Lynn Marie Morski, MD, Esq.
Written by Natalie Saunders, B.A., LicAc
6 min read
0 comments
Read Later
All information on this website is for general informational purposes only and is not intended or implied to be a substitute for professional medical advice, diagnosis or treatment.

Cannabis is the most widely used recreational drug in the USA. In recent years, it has also received a lot of publicity for its possible medical applications. Clinical studies have shown that cannabis may relieve the symptoms of a variety of conditions. These include chronic pain, depression, and more.

It is now legal for medicinal use in a majority of states plus D.C. Furthermore, several states and D.C. allow recreational use. Therefore, cannabis has become more mainstream.

Marijuana doesn’t carry the same risk of overdose as opioids. However, it is not always entirely free from adverse effects. Sadly, the rise of the plant coincided with a sharp increase in patients suffering from cannabinoid hyperemesis syndrome (CHS).

But what is CHS, and what are the causes?

What Is Cannabis Hyperemesis Syndrome?

CHS causes recurrent episodes of severe nausea and vomiting. These episodes may last for several days. Patients with CHS can end up hospitalized, vomiting up to five times an hour without relief. These people are often severely dehydrated. However, laboratory tests and other investigations show no physical reason for the symptoms.

Nausea and vomiting usually subside after 24–48 hours, but may last for as long as 7–10 days. After this, there is a symptom-free period of days, weeks, or even months. During this time, the person can eat and function normally. However, unless they stop using marijuana altogether, there is a high risk of the symptoms returning sooner or later.

It can take many years of chronic cannabis use for the symptoms of CHS to appear. After such a long time getting consistently high, there are potential changes to the way cannabis influences the brain.

The exact reason why some people suffer from CHS is unclear. The condition is especially puzzling since one of the common medicinal uses of marijuana is to treat nausea and vomiting. How can something we use to relieve a symptom cause that same symptom? It seems the answer may lie in the endocannabinoid system (ECS).

The endocannabinoid system is found in all animals and consists of CB1 and CB2 receptors. These receptors interact with chemicals produced by our bodies. They also react to the compounds found in cannabis.

Researchers believe that CB1 receptors are responsible for cannabis’ ability to both relieve and cause nausea.

Three of the compounds in cannabis, tetrahydrocannabinol (THC), cannabigerol (CBG), and cannabidiol (CBD) may play a role in this mechanism of CHS. It appears that THC reacts with CB1 receptors in a way that reduces nausea. Meanwhile, CBG has the opposite effect. CBD could relieve nausea in low doses, but may also induce it if one consumes too much.

CHS is much more common in males than in females. There may also be a genetic factor at play. This possible factor explains why only a small proportion of long-term marijuana users develop the syndrome.

In the prodromal phase, patients may experience abdominal discomfort and frequent nausea, especially in the early morning. They may feel like they want to throw up, but not do so. This phase can last for months or even years before progressing to hyperemesis. 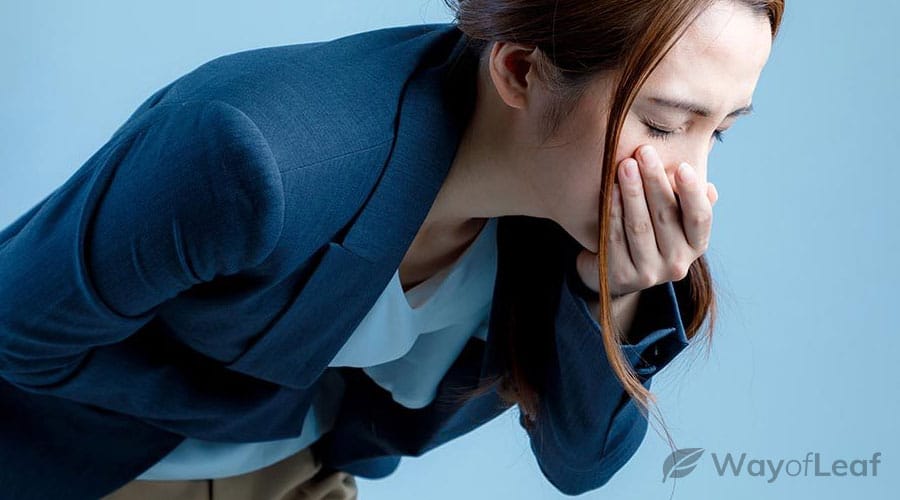 Once the hyperemesis phase begins, CHS sufferers will feel constantly nauseous and vomit several times an hour. This phase is often wholly debilitating and also leads to severe dehydration and weight loss. Hyperemesis is the stage where patients could end up hospitalized, where they receive intravenous (IV) fluids and close monitoring. The hyperemesis phase of CHS usually lasts a couple of days. However, it can go on for a week or longer.

Finally, the recovery phase begins. The patient is gradually able to start eating regularly and can regain any lost weight. The recovery period can last for days, weeks, or months before the cycle repeats itself.

Unfortunately, the only way toward a complete recovery from CHS is to stop using marijuana entirely. Many people find this extremely difficult. Some CHS sufferers even try increasing their cannabis intake, having heard that it can relieve nausea. However, in these cases, it will likely only make the problem worse.

If an individual does decide to quit cannabis, it can take 7–10 days for the symptoms of CHS to go away completely. They will need both patience and willpower to succeed.

For anyone suffering from CHS who is unwilling or unable to stop using cannabis, there are a few solutions that may offer short-term relief. However, once it starts, CHS is likely to continue recurring until cannabis is stopped altogether.

The most commonly prescribed medications for nausea and vomiting are antiemetics. These include several different classes of drugs designed to relieve these particular symptoms. They are administered by mouth or via an IV drip if the patient is unable to keep anything down. However, in CHS, these medications appear to have little to no effect and are therefore of limited benefit.

In CHS, antiemetic medications appear to have little to no effect and are therefore of limited benefit.

Other drugs, such as benzodiazepines (lorazepam, diazepam, etc.), could reduce abdominal pain during the hyperemesis phase. Patients should only use them as a short-term solution due to the high risk of dependence. They should avoid opioid painkillers entirely for the same reason.

A common practice amongst people with CHS is bathing or showering in extremely hot water during the hyperemesis phase. Doing this temporarily alleviates the symptoms. Some sufferers report staying in the shower for prolonged periods, desperately seeking some relief.

Scientists believe that the simple act of putting hot water on the skin stimulates transient receptor potential vanilloid (TRPV1) receptors. These receptors play a role in the transmission of pain signals and controlling movement in the digestive tract. Long-term exposure to cannabinoids may block these receptors. The result is symptoms of abdominal pain, nausea, and vomiting seen in CHS. High temperatures can reverse this effect, and many CHS sufferers quickly learn that taking a hot shower helps.

Anyone wishing to try hot water bathing to reduce CHS symptoms should take care not to scald themselves. It is essential to check the temperature of the water before getting in and avoid prolonged exposure to very hot water.

An alternative to hot water bathing, which works similarly, is capsaicin cream. Capsaicin is a chemical found in chili peppers, which makes them hot. This compound is extracted and made into a concentrated cream that is rubbed onto the skin to relieve pain.

Physicians often prescribe it for conditions such as arthritis. However, a recent case study by Moon et al. from 2018 suggests it is potentially useful in reducing the symptoms of CHS. In this study, the researchers applied capsaicin 0.075% cream to a 15x25cm area of skin on the lower abdominal area every four hours. After four doses, the patient reported a complete resolution of his abdominal pain and nausea.

Capsaicin cream causes a warming or burning sensation on the skin and could relieve the symptoms of CHS.

Capsaicin cream causes a warming or burning sensation on the skin. This is one of the reasons why it could relieve the symptoms of CHS. However, in some people, this cream can cause a rash. We advise individuals to test it out on a small patch of skin first to see how they react. Wash the hands thoroughly after applying the cream and avoid contact with the eyes, nose, mouth, or genitals.  Do not use capsaicin on damaged or broken skin.

People with CHS may vomit several times a day, leading to severe dehydration. This situation is potentially dangerous, and they should make every effort to keep some fluids down. Rehydration salts mixed with water or sports drinks containing electrolytes are best. Taking small, regular sips reduces the chance of them coming straight back up.

Anyone unable to hold any food or water down should visit their local hospital. Medical staff will give them IV fluids and possibly other medication to relieve their symptoms.

CHS only affects a small proportion of cannabis users. However, it is a debilitating condition, causing significant interruptions to daily life and lost workdays. It is a cyclical syndrome. This means there are long symptom-free periods, alternating with severe nausea and vomiting, which can last for several days.

The only way to reverse the syndrome is by stopping marijuana use. For many sufferers, however, this is a difficult decision to make.

Cannabis laws are now relaxed in many states, and the use of marijuana is as popular as ever. As such, it looks like CHS is not likely to disappear any time soon. Therefore, every regular smoker must become familiar with its symptoms.