Vaping seems to be all the rage lately. Whether it’s for nicotine or cannabis, vaping has become an incredibly popular alternative to old school smoking techniques, but what is it about vaping that so strongly attracts such a large percentage of the green loving population? Let’s have a look at some of the pros and cons of vaping as opposed to the more traditional method of simply smoking your weed.

First of all, if you are totally new to the subject, you might be wondering, what is vaping? Well, vaping simply is an alternative method of consuming cannabis. It involves heating cannabis, either in dried herb or in an oil form, to temperatures below its combustion point. This heating method produces a vapor which you then inhale.

There are tons of vape pens, cartridges, and accessories out there which enable you to vape cannabis. Vape pens are basically an evolution of the cigarette-style vape pens that smokers use as an alternative to smoking cigarettes.

Here Are the top Pros and Cons of Vaping Marijuana so you can decide what method of consuming your cannabis is best for you.

Two of the main reasons why vaping has become so popular over the last few years are it is a convenient and discreet way to consume cannabis. A disposable vape pen, for example, comes with a prefilled cartridge containing cannabis oil. Some are draw-activated, which means they only work when you inhale on them, while others have a button which you press which heats the atomizer (heating element) inside the vape pen.

How convenient is that? It takes away the hassle of having to source some weed and then having to sit down and roll a spliff. Another pro is that it is a much more discreet way to consume your cannabis, particularly when you are on the go. You can discreetly store a vape pen in an inside pocket or in a bag or handbag. And as you are vaping the contents rather than combusting them, you are not producing smoke, which allows you to be less conspicuous, too.

One of the most obvious advantages vaping has over traditional methods of consuming cannabis is that it doesn’t involve burning weed, so, therefore, no smoke is produced. The harmful effects of inhaling smoke produced from any source, particularly from tobacco or marijuana for that matter, is well known. That is because smoking weed exposes you to dangerous and carcinogenic compounds, which have a detrimental effect on your respiratory health.

Apart from being harmful to your health, the smoke from marijuana is very strong and tends to linger on your clothes as well as wherever you smoked it too. With vaping, this obviously doesn’t happen. So, as well as avoiding the potential health risks of smoking, you are also removing the unpleasant smell that marijuana smoke leaves behind.

With Vaping, You Experience Stronger Flavors

Naturally, when you combust or burn cannabis, it will have a detrimental effect on its taste. In some cases, smoking creates thick and harsh smoke, which overpowers the flavor of the particular strain you are smoking. When you vape, however, you are simply heating the cannabis, and crucially, not burning it. Therefore, vaping allows you to taste all of the flavorsome terpenes in their full and deliciously delectable glory. One thing to be aware of, though, is that the strength of the flavor tends to decrease significantly as you near the end of your vaping session.

Control Over Temperature and More Bang for Your Buck

Most high-quality vape pens come with adjustable heating settings, which allows you to find the temperature which produces the best results that suit your own personal taste. Being able to adjust the settings of your vape pen also allows you to have greater control over the level of cannabinoids you extract each time, too.

In terms of getting more bang for your buck, after you have vaped dried bud, this already-vaped-bud (ABV) can be used again to make tea or edibles. Some people keep this ABV as an “emergency” smoke or vape.

One of the main drawbacks to vaping, particularly at the start, is that there is a pretty steep learning curve. You have to put the time in to do your research and source a top-quality vape pen or vaporizer. From there, you also have to learn how to use your vaping device so that you can get the best vaping experience from it.

Another con is the initial cost when setting out on your vaping adventure. You have to purchase a vaporizer or a vape pen, and if it is a refillable one, you will also have the additional cost of buying cannabis e-juice canisters for it. Even a good, relatively inexpensive vaporizer will cost you more than $100, so the cost is a significant drawback when it comes to vaping. Also, most vaporizers don’t function as well if the bud isn’t ground down into a fine powder form, so you will probably have to fork out for a grinder too.

Having to Charge the Battery Regularly

You will need to keep your vaping device clean to ensure that you always get the best vaping experience possible from it. You may not have to clean it every time, but you will definitely need to clean it regularly.

The Effects are Arguably Not as Potent

Vaping has been described as being a “cleaner high,” but some would argue that the overall effects are weaker when you vape as opposed to smoking, for example.

Last, but definitely not least, there is some concern out there that vaping may not be as healthy an option as is widely believed. One major issue with the cannabis concentrate oil used in vaping cartridges is the chemicals used during extraction and the thinning process. Raw cannabis oil in its natural state is much too thick and viscous to be suitable for consuming. In order to transform it into a runnier and more liquid form, thinning agents need to be used.

Two of the most commonly used thinning agents are propylene glycol, and polyethylene glycol, both of which potentially can be broken down into carcinogenic compounds like formaldehyde and acetaldehyde, which can happen when they are sublimated in high-temp vape pen cartridges.

A 2010 study, published in the International Journal of Environmental Research and Public Health, found that propylene glycol, even when inhaled in low concentrations, could potentially cause asthma, allergic reactions, as well as other respiratory problems.

The emerging consensus is that the temperature of a vape pen’s heating coil is one of the most important, if not the most important, factors in avoiding the potentially harmful risk of thinning agents being broken down into carcinogenic compounds like formaldehyde during the sublimation process.

The cheaper vape pens out there on the market tend to contain coils which sublimate cannabis oil at a much higher temperature than necessary, which increases the health risks for the consumer. It is highly recommended that you source a high-quality vaping device from a reputable manufacturer rather than simply going for the cheapest one.

Another potential health risk associated with vape pens, particularly the inexpensive ones, is the one posed by the inhalation of cuticle wax contained in cannabis oil. Most flowering cannabis plants, including hemp, have an oily, fatty outer layer of lipid, known as cuticle wax, covering their surface. When smoking cannabis, cuticle wax is combusted and burned away, and it is believed that this mitigates against any potential respiratory health risk. The problem is that this doesn’t happen when vaping at lower temperatures. 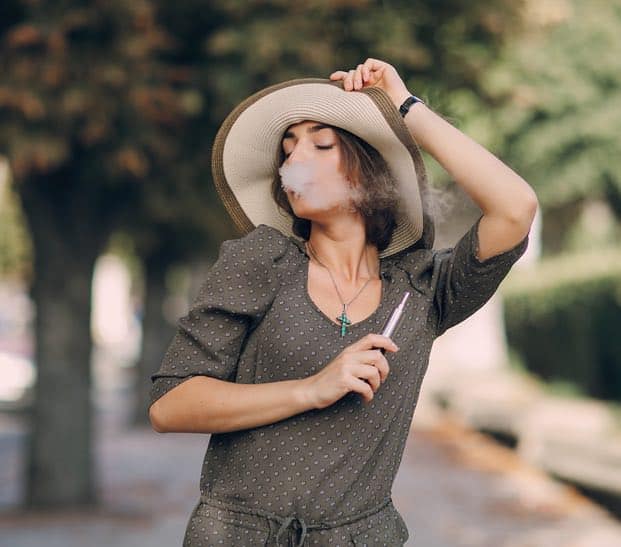 So, what are the potential health risks, if any, to inhaling cannabis oil containing cuticle wax? Well, the jury is still out on that one because there haven’t been any empirical studies conducted so far in relation to this. However, experts at the cannabis analysis laboratory, Steep Hill Labs, speculated in an interview with Rolling Stone magazine in October 2017 that vaping cannabis oil containing cuticle wax could lead to the formation of solidified granulomas in the lungs over time.

What consumers can do if they have any concerns about this is opt for CBD oil, which has undergone a process known as “winterization.” During the winterization process, a solvent and cold temperatures are used to remove the cuticle wax, lipids and other oil compounds from the cannabis plant.

Discover our top 5 picks for d…

Final Thoughts on the Pros and Cons of Vaping Cannabis

As you can see, when it comes to vaping, there are plenty of pros and cons to it. Some of the arguments in favor of vaping are that it is a more convenient and discreet way of consuming cannabis. Also, the fact that you are heating rather than burning your weed, you get to experience stronger flavors as well as avoiding the harmful effects of inhaling marijuana smoke.

There are, however, some drawbacks to vaping. The initial cost of purchasing your vaping device can be quite high and also the learning curve to familiarize yourself with the equipment, and vaping generally, is quite steep. There are also some concerns about the safety of vaping, too, particularly around the use of toxic substances as thinning agents to transform raw cannabis oil into a more liquid form which is suitable for vaping.

You will have to weigh up all of the pros and cons before deciding whether vaping is for you or not.

5
6 min read
Join the discussion
TOC
Premium
Your subscription has ended
If you love cannabis and want to support our site, join WayofLeaf Premium today and unlock
Best of all, part of your membership fee will go towards supporting the fight to legalize cannabis.
Sign Up for WoL Premium
No thanks, I can't afford it
I already have an account
×
Login in to your premium account