Breastfeeding is incredibly valuable – that much should go without saying. Not only does it form an important maternal connection between child and mother, but breast milk contains essential nutritional defenses that a child needs to develop and grow.

But with an increasing number of pregnant women using cannabis, the question is being asked: is it ok to use medical marijuana while breastfeeding?

Read on to find out…

Understanding the Advantages of Breastfeeding

Most people know breastfeeding as the process of nursing babies with milk from a mother’s breast. However, it’s a little more complex than that.

After a woman gives birth, levels of estrogen and progesterone begin to drop, but prolactin levels rise. These changes in hormonal output signal an increase in breast milk production. Most new mothers will produce breast milk in the first week or so, without needing any prompt – this stage is known as lactogenesis II.

But this isn’t sustainable for the body.

After a week or so, breast milk is developed based on a supply and demand process. High levels of prolactin and oxytocin are continually made based on specific pituitary gland activity. Prolactin encourages the breast glands to produce milk, while oxytocin allows the alveoli to release fluid from the milk ducts.

In terms of timescale, breastfeeding typically begins from birth to whenever the mother chooses to stop the supply and demand chain. However, complications can reduce breastfeeding time – or they can halt it altogether.

As far as whether or not breastfeeding is advantageous, most health organizations (including WHO and UNICEF) suggest that it is. But why is this?

Why Do Women Choose to Breastfeed?

Women’s bodies are biologically designed for breastfeeding. This is no “evolutionary accident.” The act of breastfeeding possesses significant emotional and biological implications, which are important for both mother and baby.

Positives of breastfeeding for babies include:

Positives of breastfeeding for mothers include:

Despite the many positives associated with breastfeeding, some women may still encounter obstacles. These could include:

Experiencing breastfeeding challenges doesn’t reflect a mother’s competency. In fact, many of these issues are typical, especially for new mothers. However, some of these problems are considered ‘choices’, and medical marijuana is one of them.

So, why would any mother choose to use medical marijuana while breastfeeding?

The most common reason a woman would consider using medical marijuana while breastfeeding is a pre-existing condition.

Marijuana has a complex chemical structure which is made up of hundreds of cannabinoids. These cannabinoids all interact with something called the endocannabinoid system. This system exists within the body and influences things like metabolism, immune function, memory, and many more biological functions. 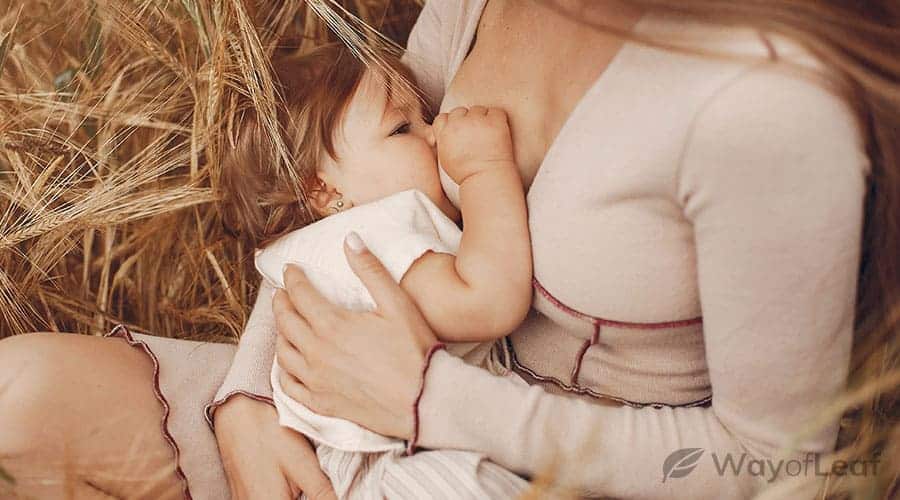 The relationship between marijuana and the endocannabinoid system has led many states to legalize the compound in particular instances. Some of the most common qualifying conditions for marijuana use are:

DID YOU KNOW? Many professionals advocate not using marijuana while breastfeeding.

Women who use medical marijuana for any one of these conditions may find it a daunting task stopping medication because of pregnancy.

But while medical marijuana may have been a sensible choice of medication pre-pregnancy, this may not be the case during or after. In fact, professionals strongly advocate not using marijuana while breastfeeding. Here are some of the reasons why.

The Risks of Using Medical Cannabis While Breastfeeding

When it comes to postnatal marijuana-use, the biggest concern centers around THC (tetrahydrocannabinol) and its metabolites. Certain metabolites, such as THC-COOH, circulate through the bloodstream and are stored in body fat. Since breast milk contains high volumes of saturated and unsaturated fat, THC finds its way into this fluid.

So, how does this impact nursing?

Breast milk is a life-giving fluid; it contains all the essential nutrients that newborns need. And it’s proven almost impossible to replicate in any man-made baby formula. But there is still much to learn about prenatal exposure to THC, primarily through lactation.

If a condition becomes unmanageable without medical marijuana use, it’s recommended to visit your GP or doctor to discuss possible alternatives that may be safer.

8
7 min read
Join The Discussion
TOC
Premium
Your subscription has ended
If you love cannabis and want to support our site, join WayofLeaf Premium today and unlock
Best of all, part of your membership fee will go towards supporting the fight to legalize cannabis.
Sign Up for WoL Premium
Not now
I already have an account
×
Log in to Your Premium Account