At present, marijuana is legal for adult use in 11 states plus Washington, D.C. There are also MMJ programs in 22 other states. One of the benefits of the growing popularity of cannabis is the increase in product choice. You no longer have to smoke cannabis. You can use marijuana creams, edibles, drinks, and vape juice.

This is a timely intervention because of the risks attached to smoking cannabis. One can make a case that smoking pot is less harmful than using tobacco in the same fashion. However, it doesn’t negate the fact that the smoking process itself is dangerous.

When you combust cannabis, it releases harmful chemicals and carcinogens. While this may fall short of the extraordinary damage caused by tobacco cigarettes, it is still likely to cause serious adverse effects.

Moreover, it isn’t just the smoker who can suffer ill-health. In this article, we focus on the possible effects of secondhand marijuana smoke. It seems as if ‘innocent bystanders’ are not safe from the deleterious effects of smoking.

Here is a list of possible issues caused by secondhand marijuana smoke:

If the marijuana is contaminated with chemicals such as insecticides, or mold, these could also damage the lungs of those exposed to secondhand smoke.

What Are the Health Risks of Second Hand Cannabis Smoke?

Like with tobacco, smoking cannabis causes irritation and inflammation in your throat, airways, and lungs. This increases your risk of developing a chronic cough, bronchitis, and other respiratory diseases. Cannabis smokers tend to draw deeper and hold the smoke in for longer. As a result, marijuana could deposit up to four times as much tar in your lungs as regular cigarettes.

For many people, these risks are outweighed by the potential benefits, though. It’s a matter of personal choice. But how about the people around you?

Are you putting the health of your friends and family in danger when you smoke around them? Unfortunately, research suggests this is potentially the case.

Smoke is created when cannabis (or anything) is combusted at a high temperature. This process causes its compounds to break down and become released in the air. As well as containing THC, the intoxicating component of the plant, marijuana smoke contains many other chemicals too. Some of these are potentially harmful to human health, and include:

The most abundant chemical produced, by far, is ammonia. Combusting cannabis produces several times the ammonia of cigarette smoke. That goes for secondhand ‘sidestream’ smoke too, which is a problem for anybody sitting close by. None of this considers the effect it has on you!

It is difficult to believe that marijuana smoke is worse for your health than tobacco. However, one study suggests that it is, at least in terms of heart health. Researchers exposed rats to the smoke from a joint containing 4.5% THC, a ‘placebo’ joint without THC, and a Marlboro Red cigarette.

The findings showed that after just one minute of exposure, marijuana caused the rats’ blood vessels to dilate. This effect was observed even in rats exposed to THC-free cannabis. 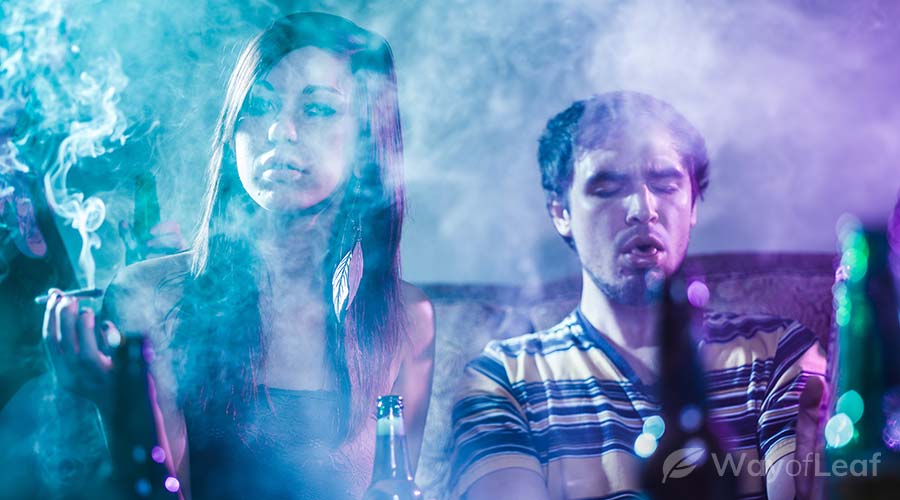 Both the joints and the cigarette also led to impaired flow-mediated dilation (FMD). This is a measure often used to assess patients at risk of cardiovascular disease. The effects of the cigarette wore off after just 30 minutes. In contrast, the effects of marijuana lasted much longer, only wearing off 90 minutes after exposure.

More studies are essential to confirm whether these effects are translatable to humans. Unfortunately, from what we know at present, secondhand marijuana smoke is potentially even more dangerous than tobacco.

The Health Risks of Secondhand Cannabis Smoke for Children

The dangers of passive smoking are of particular concern to parents whose children still live at home. Secondhand smoke increases a child’s risk of asthma and respiratory and ear infections. It could also raise the risk of sudden infant death syndrome (SIDS) in babies.

Although parents are smoking less tobacco now than they were a few years ago, cannabis use among parents has increased. One survey carried out between 2002 and 2015 found that cigarette smoking fell from 27.6% to 20.2% during this period. However, marijuana smoking rose from 11% to 17.4% in parents who also smoked tobacco, and from 2.4% to 4% in those who did not.

Another study of children hospitalized with bronchitis found that those with parents who smoked cannabis tested positive for THC-COOH in their urine. THC-COOH is a metabolite of THC which can stay in one’s system for much longer than THC itself. THC exposure in children is particularly worrying, as the compound is known to affect brain development in young people.

Parents who smoke marijuana or tobacco are advised to protect their children by taking the following precautions:

Can You Get High from Secondhand Cannabis Smoke?

Many people wonder whether it is possible to get high from secondhand marijuana smoke. Research suggests that you could, although the effects are unlikely to be potent.

A study, conducted at John Hopkins University, took six smokers and six non-smokers and put them in a sealed room together. The smokers received ten joints and were allowed to smoke them at will for an hour. The effects on the non-smokers were then measured for 34 hours after the session.

After this session, the non-smokers also experienced slight increases in heart rate, mild to moderate sedation, and impaired cognitive function. There was one report of feeling sick, one of anxiety, and one of a racing heart.

The third session was conducted using the 11.3% THC strain. However, this time, the room was ventilated at a similar level to a home air conditioning system (around 11 air changes per hour). None of the non-smokers experienced any intoxicating effects during this session, and THC-COOH levels fell back to insignificant levels.

These results suggest that secondhand cannabis smoke can get you high, but a well-ventilated space minimizes the risk.

That said, even if a ‘contact high’ is uncommon or even unlikely, there are other side effects associated with secondhand cannabis smoke. These include:

Vaping has exploded in popularity in recent years and is widely believed to be healthier than smoking weed in the traditional way. When you vape, your bud is exposed to temperatures which are high enough to release the beneficial compounds such as cannabinoids and terpenes.

Vaping avoids the combustion process, so it produces fewer harmful chemicals in theory.

However, in practice, it is far from being a guaranteed, safer method of using cannabis. A review by the Americans For Nonsmoker’s Rights (ANR) in August 2018 wasn’t great news for vaping.

It suggested that vaping, and other methods such as dabbing, are little better than puffing on a joint when it comes to secondhand smoke. These modern techniques can also produce particles that are harmful to human health, and result in hazardous levels of pollution when practiced indoors. Maybe not as healthy as we first thought!

The recent vaping epidemic also places a black mark on the practice. Admittedly, those who were sick or died from a vaping-related illness used black market THC. These products contained ingredients such as vitamin E acetate, which are seemingly deadly when heated. Vapers must also beware thinning agents such as PEG 400, which produce formaldehyde at certain temperatures.

We want to believe that smoking cannabis is a healthier option than tobacco. Sadly, however, this isn’t necessarily the case. There are certainly some medicinal benefits from using MMJ. Also, nobody can argue that it provides a relaxing buzz. Alas, there are plenty of risks to consider, too.

We’re not here to judge, but secondhand smoke is not just a problem for the smoker. It can also damage the health of people around them. Our advice is to show consideration for others. Smoke outdoors or in a well-ventilated area, and consider other methods of consumption indoors, especially if kids are involved.

4
3 min read
Join the discussion
TOC
Premium
Your subscription has ended
If you love cannabis and want to support our site, join WayofLeaf Premium today and unlock
Best of all, part of your membership fee will go towards supporting the fight to legalize cannabis.
Sign Up for WoL Premium
Not now
I already have an account
×
Log in to Your Premium Account