Today we’ll discuss what heirloom cannabis strains are and whether they are worth hunting down in your local dispensary.

What Are Heirloom Weed Strains?

There is some variation in how botanists define heirloom plants. Generally speaking, they are cultivars that have remained unchanged for at least 50 years. The seeds of heirloom strains are passed down through generations of gardeners, and both the offspring and parent plants display very similar features.

The seeds of heirloom strains are passed down through generations of gardeners.

Heirloom cannabis strains are ‘open-pollinated,’ meaning that they are pollinated naturally. Pollination could be due to the wind, birds, or insects, and in some cases, even by human hands. However, heirloom weed differs from ‘landrace’ cannabis strains. Landraces are marijuana plants that grow in the wild with no interference from humans.

For obvious reasons, there aren’t as many heirloom weed strains as there are heirloom tomatoes or pears, for example. If you want to try heirloom marijuana, you could have a real task on your hands.

So, is it worth the extra hassle to try and find one of these traditional varieties of weed? Or should you stick with what you know? Let’s take a closer look.

What’s the Difference Between Heirloom Weed and Landrace Strains?

Landrace strains occur naturally in a specific region (for example, the mountains of Afghanistan or the tropical forests of Thailand). Heirloom weed comes from seeds that were taken away from these regions and grown elsewhere.

During the 1960s and 70s, many stoners embarked on a journey through the Middle East and Asia. The route is now affectionately known as the ‘Hippie Trail.’ These pot pioneers saw marijuana growing in its natural habitat and sampled some indigenous landrace strains. Of course, they would also have had the opportunity to bring back some of their precious seeds. 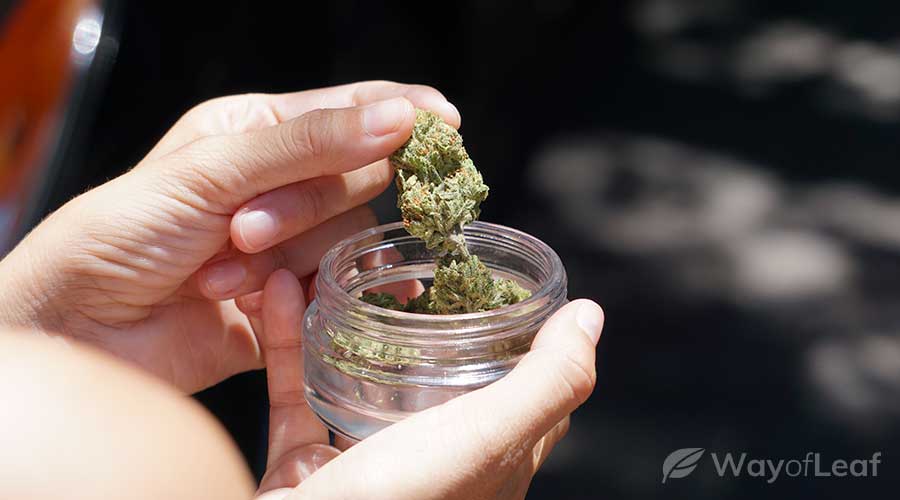 During the early days, landrace cannabis strains were pretty much the only available option. However, that did not remain the case for long. Obviously, once you grow a seed away from its natural home, it is technically no longer a landrace. And it was not long before breeders began experimenting by cross-pollinating these strains to create new and exciting varieties.

Cannabis breeders developed most heirloom weed strains in the states of Hawaii and California. They found that Hawaii’s tropical climate and fertile soil was ideal for growing strains originating from Thailand and India.

Meanwhile, Northern California, with its slightly cooler climate, provided the perfect conditions for other landrace strains. More specifically, landraces originating from the high altitudes of the Hindu Kush mountain range.

And so, in these two states, the very first marijuana hybrids were born. These are what we now know as heirloom weed strains. It is rare to find heirloom strains for sale today, and even rarer to find pure landraces. However, all of the weed we now know and love originated from these few varieties.

Most of the cannabis strains that are available today are hybrids. These hybrids have been bred over and over again to produce specific qualities. Whether it be astronomical THC levels, hefty yields, fast flowering times, or increased resistance to pests and mold; all of these qualities have come about as a result of selective breeding.

There are hundreds of different strains available today. However, there are three primary ‘families’ of marijuana with which every pot lover is likely to be familiar. These are the Kush, Haze, and Skunk, families. These classic strains have passed their genetics on to many modern-day hybrids.

Kush strains are probably one of the closest things you will find to a landrace strain today. These plants are direct descendants of the Hindu Kush strain, native to the Afghani/Pakistani border. This strain was imported during the 1970s and quickly soared in popularity due to its relaxing, sedative effects. There are plenty to choose from, including:

At the other end of the spectrum, Haze strains are famous for their uplifting, energizing effects. These strains also originate from the 1970s. Breeders combined the genetics of landrace strains such as Acapulco Gold and Colombian Gold with Thai and Indian sativas. The original Haze, sometimes known as Neville’s Haze, has also given birth to many well-respected strains. Some of these include:

Skunk strains have a combination of indica and sativa genetics, although the ever-popular Skunk #1 is slightly indica-dominant at 65%. These varieties, best-known for their pungent aroma, also originated in the 1970s. The first skunk strain resulted from crossing Acapulco Gold and Colombian Gold with an Afghani landrace. Some notable modern-day strains with Skunk genetics include:

The Benefits of Heirloom Weed Strains

Now that there are so many different hybrid strains available, heirloom weed is often overlooked in favor of these exciting new creations. However, there could be certain advantages to growing and using these more classic strains.

One problem with cross-breeding marijuana is that the results can be unpredictable. For example, you might cross an indica-dominant female with a sativa-dominant male in the hope that you would get a perfectly balanced 50/50 offspring. Unfortunately, what’s far more likely is that you would get some offspring with indica-like qualities and others with sativa-like qualities.

This situation can be prevented somewhat by backcrossing offspring with your desired properties with one of its parent strains. However, it can take several generations of backcrossing and a lot of patience to stabilize a new strain fully.

Heirloom weed strains have genetics that are closer to landrace varieties and are therefore far more stable. As we previously mentioned, heirloom seeds produce offspring that are usually very similar to their parents. As a result, the results are more predictable.

Heirloom Weed May Have Higher Cannabinoid Content Than Other Hybrids

Another potential benefit of heirloom cannabis is that it may be better than many hybrids in terms of quality and cannabinoid content. People who cultivate other heirloom fruit and vegetables swear that their produce tastes better than intensively farmed, genetically-modified crops. They may be even more nutritious too.

Similarly, some believe that landrace and heirloom weed strains contain more beneficial compounds than strains repeatedly bred over several generations. While it is hard to either prove or disprove this theory, there is some logic behind it. For example, many new strains are bred specifically to have an insanely high level of THC. While this is great if all you want is to get completely high, it does come at a price.

There is a finite amount of space in each cannabinoid-laden trichome. The more THC you try to cram in, the less there will be of everything else. This potentially means reduced levels of CBD and other cannabinoids, as well as beneficial compounds like terpenes. It could mean missing out on some of the most useful aspects of the herb for medicinal users.

We recognize that it is human nature to want to try new things and have as much variety as possible. However, by creating so many hybrids, we could be sacrificing part of what made marijuana great in the first place!

These days, brand new cannabis strains are springing up all the time. Unfortunately, it is becoming more and more challenging to find weed that is just the way nature intended. Although there is no denying the appeal of these new creations, there is also something to be said for keeping it simple.

It is becoming more and more challenging to find weed that is just the way nature intended.

Heirloom weed strains may not have funny names or THC levels that are guaranteed to send you into a tailspin. Nonetheless, there is no denying that these classic cultivars have a certain charm of their own.

When you smoke an heirloom cannabis strain, you are smoking a little bit of history. And these days, that is a novelty in itself. So, if you have the chance to try one of these classic buds, be sure to snap it up. You may find that you are pleasantly surprised!