While we know the harmful effects of smoking tobacco, the consequences of long-term cannabis use aren’t as well studied. The biggest impediment to wide-scale cannabis research is the drug’s current legal status at the federal level. Cannabis is classified as a Schedule 1 drug under the Controlled Substances Act. Therefore, it is federally illegal. At the time of writing, it is legal for medical use in 33 states plus D.C.

Only the removal of cannabis as a Schedule 1 agent and its legalization at the federal level can change matters. This development would undoubtedly pave the way for in-depth research and further study. This would hopefully lead to researchers finding answers to the myriad of marijuana questions.

In this article, we look at whether or not mixing cannabis with nicotine is terrible for your health. Before we proceed, there are a couple of crucial points to bear in mind. Firstly, smoke inhalation, regardless of the source, hurts cardiovascular function.

The extent of the respiratory harm it causes is dependent on many factors. These include the source of the smoke, how much of it you inhale, and how long you inhale it for.

Secondly, both cannabis and tobacco smoke contain carcinogens. According to Underner et al. in their 2014 review, Cannabis Smoking and Lung Cancer:

Is Mixing Tobacco with Weed Bad for You?

We have known about the link between tobacco smoke inhalation and lung cancer (as well as other forms of cancer) for several decades. If smoking tobacco is harmful to your respiratory health, smoking it combined with weed is also a bad idea.

A study by Wang et al. suggests that the same is true of second-hand marijuana smoke. The team’s research was published in the Journal of the American Heart Association in July 2016. Ultimately, it found that a minute of second-hand weed smoke exposure significantly impairs vascular endothelial function.

Indeed, it impaired the femoral artery flow-mediated dilation in rats to a “comparable extent as impairment from equal concentrations of tobacco.” Overall, cannabis smoke exposure was worse because the cardiovascular function impairment lasted longer.

In the 2014 study, Underner et al. state that “the specific impact of smoking cannabis is difficult to assess precisely and to distinguish from the effect of tobacco” in terms of its impact on our respiratory health. This is because people usually mix cannabis with tobacco when they smoke.

However, the study states emphatically that the combined use of cannabis mixed with tobacco has “severe pulmonary consequences.” The researchers draw on findings from cellular, tissue, animal, and human studies. This data shows “that marijuana is a risk factor for lung cancer.” According to Underner et al., “cannabis exposure doubles the risk of developing lung cancer.”

Joshi et al. conducted a review of studies in 2014. It was published in Current Opinion in Pulmonary Medicine. The researchers looked at the impact marijuana smoke has on the respiratory system. In their review, Joshi and colleagues highlighted some of the findings from other studies into the subject:

According to Joshi and colleagues, “the immuno-histopathologic and epidemiologic evidence” of marijuana users suggests a “biological plausibility” that marijuana smoking is a risk factor for the development of lung cancer. However, the reviews state that there is no conclusive link between marijuana smoking and cancer development.

Martinasek et al. reviewed studies on the respiratory effects of marijuana. The research was published in Respiratory Care in November 2016. They reviewed 48 articles in total. Overall, the team found that there is a risk of lung cancer from inhaled marijuana. There is also an association between inhalational marijuana and spontaneous pneumothorax, bullous emphysema, or COPD.

Your Brain on Drugs (Tobacco & Marijuana)

For a long time, researchers didn’t include tobacco users in participant pools for marijuana studies. They realized their mistake and finally took the plunge. As it transpires, there is a significant difference in the brains of people who use weed and tobacco, and those who use cannabis only.

A study by Fibley et al. published in Behavioral Brain Research in October 2015 looked at the issue. The scientists reported an association between smaller hippocampal brain volume and the use of cannabis. The smaller the hippocampus, the weaker the memory. Those who use weed and tobacco show an inverse relationship. Those with smaller hippocampal regions had a better memory!

Fibley pointed out that 70% of marijuana users also smoke tobacco. She also stated that most studies don’t account for tobacco use. Therefore, the effects of weed on the brain might not generalize to the majority of the cannabis-using population.

The Link Between Nicotine & Marijuana in Our Signaling Systems

Psychoactive substances such as opioids, cannabis, and tobacco share a link in our network of stimulus and reward. The hippocampus is the operational headquarters. There are cannabinoid receptors (CB1 and CB2) in the brain and body. Along with nicotinic and opioid receptors, they form part of the endocannabinoid system (ECS).

There is a significant density of these receptors in the amygdala and hippocampus. Both regions have an association with reward and addiction. The activators (or agonists) of this trio of receptors are crucial regarding the physiological and psychoactive effects they provide.

We’re aware that nicotine acts on the opioid and possibly the CB receptors. Subchronic exposure to nicotine increases the prevalence of CB1 receptors in the hippocampus. It also causes a decrease in striatal CB1 receptors. Any substance that blocks the CB1 receptors help animals and humans to stop craving drugs like morphine and nicotine.

As a result, CB1 receptor agonists could result in a nicotine craving increase. It explains why many people crave a cigarette after smoking weed. It also describes the high percentage of cannabis users who also use tobacco.

All of the above is useful information. However, it doesn’t help us gain a full understanding of the various processes that happen in the brain in response to the use of psychoactive drugs. It seems as if interactions between THC and nicotine are mainly dose-dependent. We need more studies that focus on people who use marijuana and tobacco regularly.

Mitigating Against the Harmful Effects of Mixing Weed with Tobacco 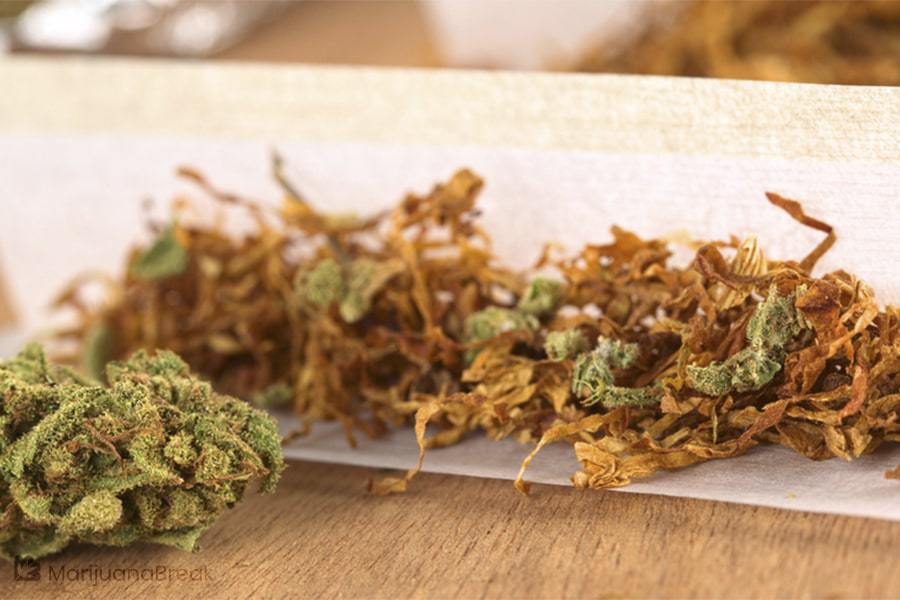 Cardiovascular function impairment from smoking cannabis or cannabis mixed with tobacco is a result of smoke inhalation. It is not due to the phytocannabinoids (e.g., THC, CBD, etc.) contained in marijuana.

Also, there are alternatives to tobacco that you can mix with your weed when smoking it. Real Leaf is one option. It is nicotine-free, and advocates say it is a cleaner and purer smoke. Other natural alternatives include sage, as well as mint and eucalyptus leaves.

Thankfully, there are more ways to consume cannabis apart from smoking it. Vaping has become increasingly popular over the last number of years, but it too has question marks over its safety.

There are concerns relating to the way that companies extract cannabis concentrates. Some extraction methods involve using solvents such as butane to remove the cannabis oil from the raw plant material.

There are fears that residual amounts of these solvents remain in the concentrate after the purging process. Supercritical CO2 extractions are probably the cleanest way of extracting cannabis oil from raw cannabis plant material.

For more information about vaping, check out this article on our site: The Pros and Cons of Vaping Marijuana

Edibles are another way of consuming cannabis. As the burgeoning cannabis industry continues to grow, there are more products for cannabis lovers to try.

When you look at the research, some of the findings are concerning. However, there still isn’t wide-scale literature on the long-term effects of smoking marijuana. For this, we can blame the herb’s Schedule 1 status under the Controlled Substances Act.

Also, as researchers acknowledge, it is hard to disentangle the respiratory harm caused by marijuana from damage caused by tobacco. People often mix it with tobacco when they smoke.

To have definitive answers, we need large-scale and long-term studies that control for variables like tobacco use.

It is also clear from the research that an essential factor is the level of marijuana use a person engages in. Most studies distinguish between light to moderate use and heavy use. Naturally, the impact on the respiratory health of heavy users is considerably higher than for light to moderate users.

The good news is that there are alternatives to tobacco for mixing with your weed, such as Real Leaf. There are also alternative ways to consume cannabis apart from smoking it. These include vaping and edibles. Finally, remember that it is the smoke itself that causes harm to our respiratory health, not phytocannabinoids.